Accessibility links
Young Polynesians Make A Life Out Of Football Scroll NFL and college football rosters and you'll see the distinctive names from the Pacific Islands. With their traditionally broad, solid bodies and competitive nature, Polynesians have distinguished themselves at the elite levels of the game. Many start at high schools in Utah. 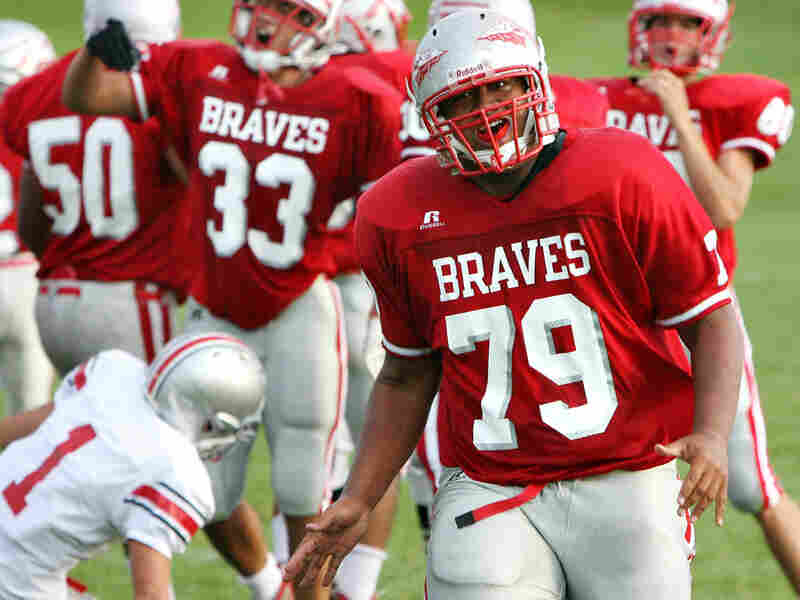 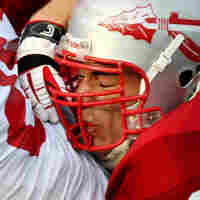 If you scroll down most National Football League rosters — and many major college football rosters — you'll see the distinctive names from Pacific Islands such as American Samoa, Western Samoa and the Hawaiian Islands.

Polynesians have distinguished themselves at football's elite levels for many reasons, including their traditional body types: broad shoulders, wide hips, thick legs. These football players' love of hard physical contact and fierce competition has its roots in Polynesian culture as well.

Many start their climb up the football ladder at high schools in Utah.

As the center of the Mormon faith in the United States, Utah has drawn Polynesians over the years. Many practice the Mormon religion because it was brought to the Pacific Islands by missionaries long ago.

In Utah, young Polynesians use football as a way to express their culture — and at times, as a way to move beyond it.

Alema Teo, 47, who played high school football in American Samoa, is the assistant football coach at Bountiful High School in Bountiful, Utah. Thomas Hamilton, 17, is the team's defensive tackle. Their high school football playing experiences are 30 years and thousands of miles apart. But they have much in common because of a shared heritage and culture.

Both stand 5 feet 11 inches tall and weigh about 300 pounds. They have the classically thick Polynesian builds that Miami Dolphins football executive Bill Parcells once called "perfect for the trenches." That's the key area around the line of scrimmage in a football game, inhabited by the biggest players on the field. 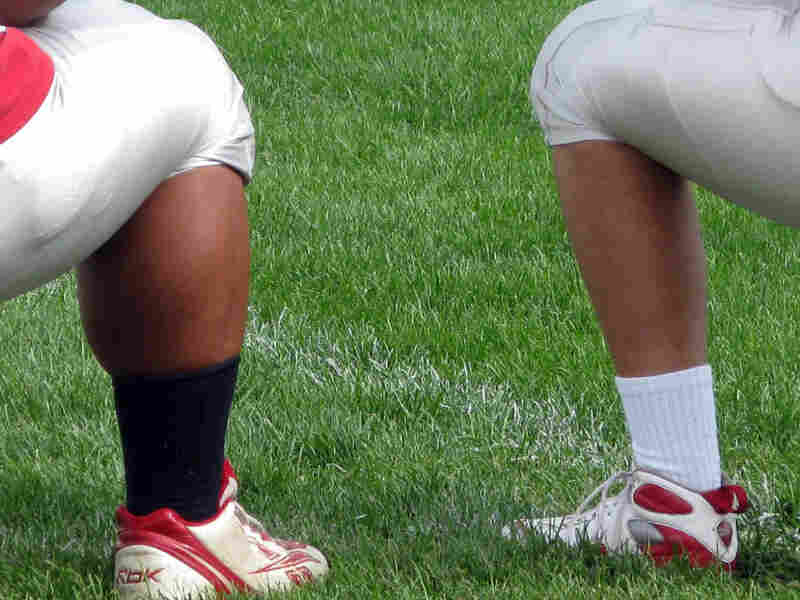 A calf comparison between Thomas Hamilton and one of his teammates. At 5 feet 11 inches and 305 pounds, Hamilton has the traditionally thick body many Polynesian players have. Tom Goldman/NPR hide caption 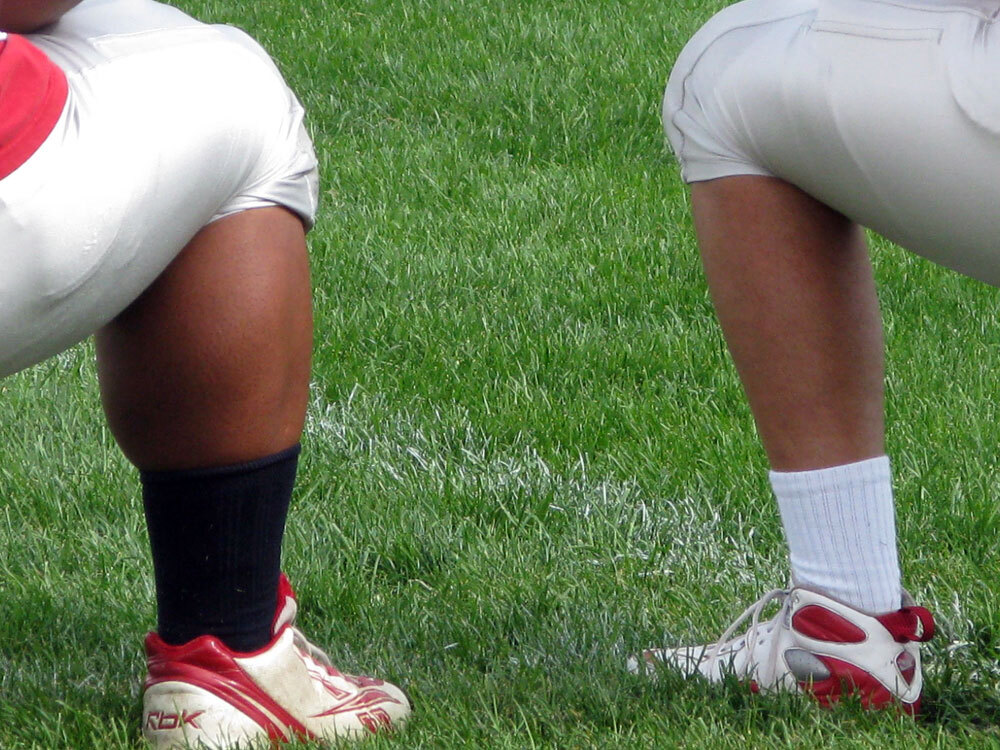 A calf comparison between Thomas Hamilton and one of his teammates. At 5 feet 11 inches and 305 pounds, Hamilton has the traditionally thick body many Polynesian players have.

They also share a cultural heritage of Polynesian dance, which most Pacific Islanders learn as kids. It adds agility to their size.

"Going to dance practice, it was like doing a [football] ladder drill," Teo says. "You got to step the proper way, move your hips the right way, move your head and your shoulders and your hands, so there's a lot of coordination work being involved when you do these traditional dances."

Of course the biggest, most agile football players are nothing without a mean streak. And here, Teo and Hamilton are confounding: In the traditional Polynesian way, both are nice, respectful, laid-back people. But in pads and helmet? They become snarling, Samoan warriors.

"Your mentality is to get ready to kill somebody. That's no joke. We would spend hours talking about, 'Hey, this is our village, this is our family.' So the coaches would build that up to the first hit," Teo says.

Hamilton shares this thirst for physical contact. Like a modern-day warrior, he crushes his way through practices and games during his senior year at Bountiful High.

"Just hitting and making the other person cry, it's just so amazing," Hamilton says. "I love it. I love it!"

Some high school teams with Polynesian players like to choreograph their aggression by performing traditional, menacing war dances called Hakas. Bountiful doesn't do a pre- or post-game Haka. Polynesian senior tight end Helam Heimuli says Hamilton is all the team needs to get fired up.

"He scares everyone, not just me. He scares the whole team!" Heimuli says. "It's just really unexpected. We're all walking out of the locker room all calm and cool, like [Bountiful head] coach Wall likes us to be. And once we get on the field, you just hear Thomas yelling. And he starts smashing people already — our own team! And we're like, 'Get on the field before Thomas kills someone on our own team!' That's how we play every Friday."

So far, it's worked. Bountiful is undefeated this season. Hamilton, at least the calmer side of him, is doing well in school with a 3.7 GPA. He plans, like many Polynesian players, to do a two-year Mormon mission before pursuing his goal of college football and, he hopes, the NFL.

Overall, 18 of the 28 Division I college football scholarships given to Utah high school players this year went to Polynesians.

This upward trajectory is heartening to Coach Teo. Nine years ago, he started what became known as the All-Poly football camp. An inexpensive, education-based skills camp, initially it was geared just for Polynesian players. Many weren't making it in school or on the field.

"There's been a trend over the last 10 years," Teo says. "A lot of our kids — yeah, [they're] good football players — but then, there's the vast majority of them that will get married early, or maybe not finish school, or go to college one year and fizzle out."

Ironically, Polynesian culture may be partly to blame. The same culture that fuels young football players may inhibit them as they try to push forward in life.

We Love Football, But

Signs of trouble in a population that now numbers close to 30,000 in Utah, Katoa says. Some in those files are there because of a tough transition from the Pacific to the U.S. mainland. Many came to Utah to practice their Mormon religion. Some succeeded, more struggled in low-paying jobs with little English skills. Their culture, with its emphasis on family, remained strong, but in succeeding generations, says Katoa, who was born in Tonga, Polynesian tradition clashed with norms in the U.S.

"For example, the way I'm raising my children, I'm raising them to be independent, and to move on," Katoa says. "After you graduate, you're going to college. The traditional way is, 'I'm raising you to take care of me, your parents, your grandparents and the extended family.'"

For many young Polynesian men, playing football in the U.S. and seeing that experience through the end seems a way to straddle the culture gap. On one hand, the sport is a source of great pride among many Pacific Islanders. On the other, it can be the classic means to an end — Katoa hopes a much bigger end.

"Football has been really good to us in a sense of publicity and getting our kids out there and some going on to the NFL arena," he says. "It's that we just want to be known for more."

Recently, high school football star Bronson Kaufusi has had to think about more.

This week at a clinic in Provo, Utah, physical therapist Brett Mortenson worked on Kaufusi's damaged right knee. Kaufusi, an all-state defensive end for perennial powerhouse Timpview High School, tore up his knee in an early season game, ending his high school career. He shed tears at first, but now he's back on track — and plans to heal on his upcoming Mormon mission. He'll resume football at Brigham Young University in Provo, where he committed to play when he was a sophomore.

Kaufusi, whose dad was born in Tonga, has a plan for football and for life.