Accessibility links
'Civilian Surge' Plan For Afghanistan Hits A Snag President Obama is expected to increase the number of American civilian experts working in Afghanistan. But there are problems persuading civilians with the requisite skills to go. 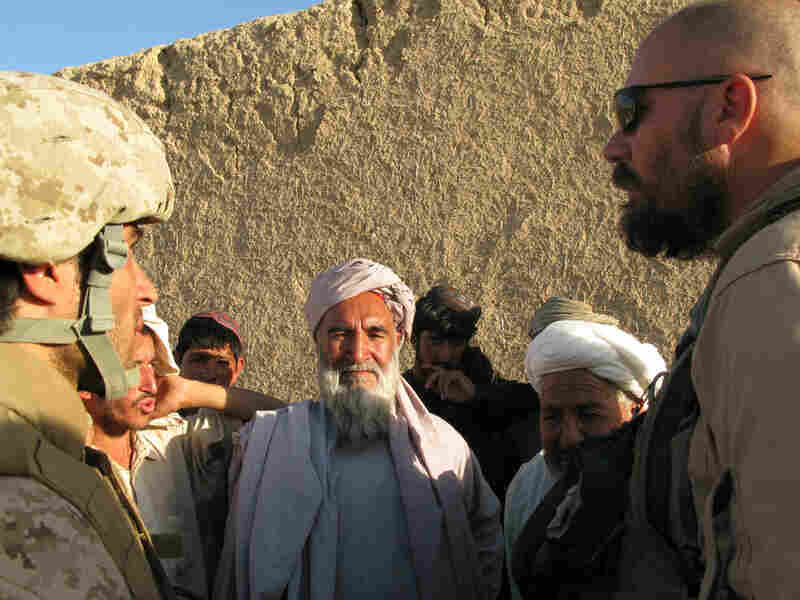 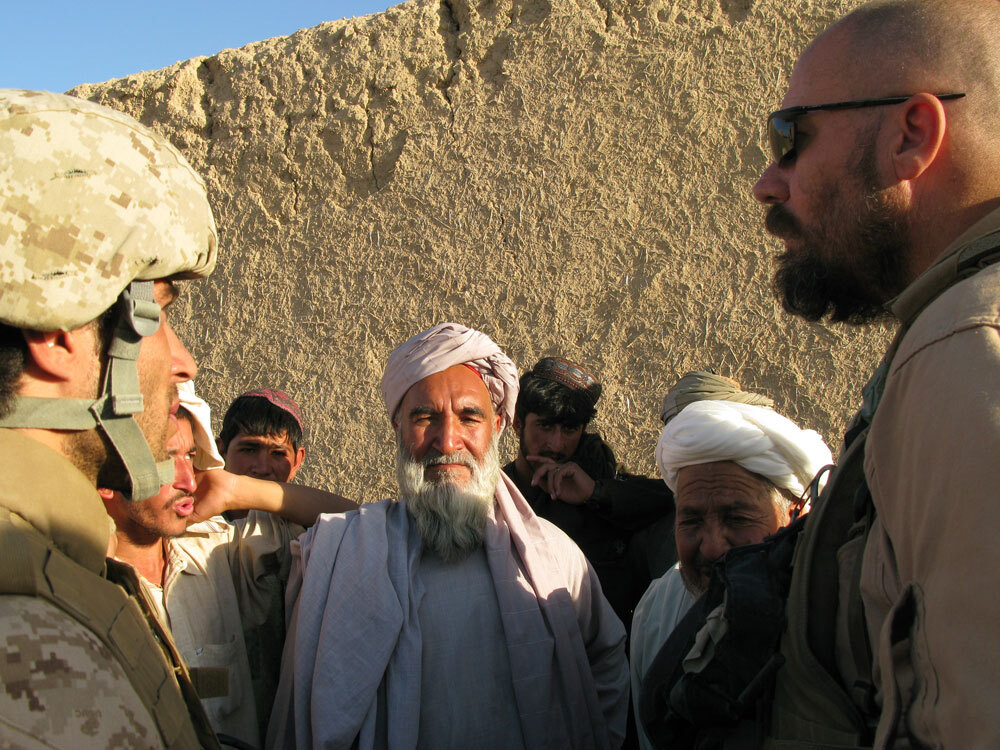 Retired New York City Police Lt. Roger Parrino (right) talks with elders in Khawji Jamal village in Afghanistan. The civilian law enforcement adviser is part of a U.S. team trying to improve relations with local Afghans. President Obama has said civilian experts are just as critical as the tens of thousands of additional U.S. service personnel sent to the country.

Speculation abounds over whether President Obama will authorize a troop increase in Afghanistan. Meanwhile, the administration is expected to increase the deployment of American government civilian workers — experts who can help rebuild the country.

But there are problems persuading civilians with the requisite skills to go to Afghanistan.

When Obama unveiled his administration's strategy for Afghanistan in March, he emphasized that civilian experts were just as critical as the tens of thousands of additional U.S. military personnel he was sending at that time.

"We need agricultural specialists and educators, engineers and lawyers," he said. "That's how we can help the Afghan government serve its people, and develop an economy that isn't dominated by illicit drugs. That's why I'm ordering a substantial increase in our civilians on the ground."

To that end, the administration announced it would send about 450 civilians from several branches of the government by March 2010. The timetable was then accelerated to December of this year. But so far, only about a quarter of that number have been deployed to Afghanistan.

"We have to remember that decisions were made in the spring, funds were appropriated in July, programming is being implemented, you know, August/September," says Jacob Lew, deputy secretary of state for management and resources. "We're just now seeing the program go into place."

Troubles With Recruitment And Security

Lew says the administration expects to reach its target numbers by the beginning of next year. Other State Department officials, and analysts, say that's optimistic — because it's difficult to find enough people who have the right skills and who are willing to stay in Afghanistan for a yearlong deployment.

"I think that quite simply there is not sufficient civilian capacity in the U.S. government to do what needs to be done. And we have not built that capacity," says John Nagl, president of the Center for a New American Security, a Washington, D.C.-based think tank on defense issues. "The civilian side still needs to develop some of the doctrine, some of the organization, some of the force structure that's required to meet the demands."

But the dispatch of civilian experts remains a high priority for the administration.

In the early days of his administration, Obama approved sending 21,000 additional troops to boost the total U.S. force to 68,000 by the end of this year. The idea is that the military clears the way, secures an area, which in turn should allow civilians to move in and start working with local Afghans.

But that's not always the way it works, says John Dempsey, who has been in Kabul for several years with the nonpartisan United States Institute of Peace.

"Security is such that it's so difficult for people to actually be able to move off of forward operating bases and get out into the field to actually meet with Afghans and do their work," he says. "They don't have the adequate logistical or security support to do that."

And the military often doesn't have the resources to move the civilians around the country — or provide security. As a result, military reservists and contractors fill in the gaps.

Similar problems plagued U.S. civilian efforts in Iraq and in other conflict areas. Mark Schneider of the International Crisis Group says there has long been a lack of funding, focus and leadership to fully implement these so-called civilian surges.

But this time it may be different, Schneider says.

"It's better in the sense that there's a far greater emphasis [and] priority from the people in charge now, who are saying that we have to increase the presence — then actually going to the Congress and saying, 'We want more money,'" he says.

But even the best intentions can get dragged down by bureaucracy and congressional foot-dragging.

For example, in 2004, the State Department decided to create a "Civilian Response Corps," in which civilians would go on short deployments into conflict zones. The corps only received funding last year. In time, it expects to build a corps of more than 4,000 active, standby and reserve members.

Its coordinator, John Herbst, says at the moment there are about 50 active members who are ready to be sent to Afghanistan.

"Obviously, the numbers I'm describing right now are not going to make a major contribution to Afghanistan," he says. "But in six months, you know, we might be in a position where we could, if there was a need, put a hundred or more people on the ground."