Accessibility links
Why Are Americans Fat? And Other G-20 Questions Leaders from the world's Group of 20 economies gather in Pittsburgh this week, and the city couldn't be more excited. Volunteers are preparing to welcome visitors with answers to questions about how to get around, where to eat — and even peculiarities of American culture. 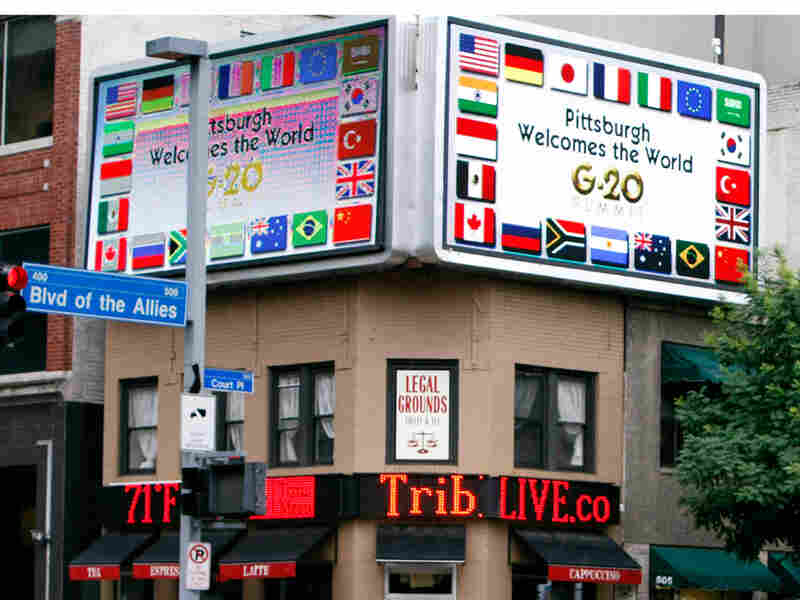 The economic meeting of leaders from the Group of 20 is scheduled to be in Pittsburgh on Sept. 24 and 25. Keith Srakocic/AP hide caption 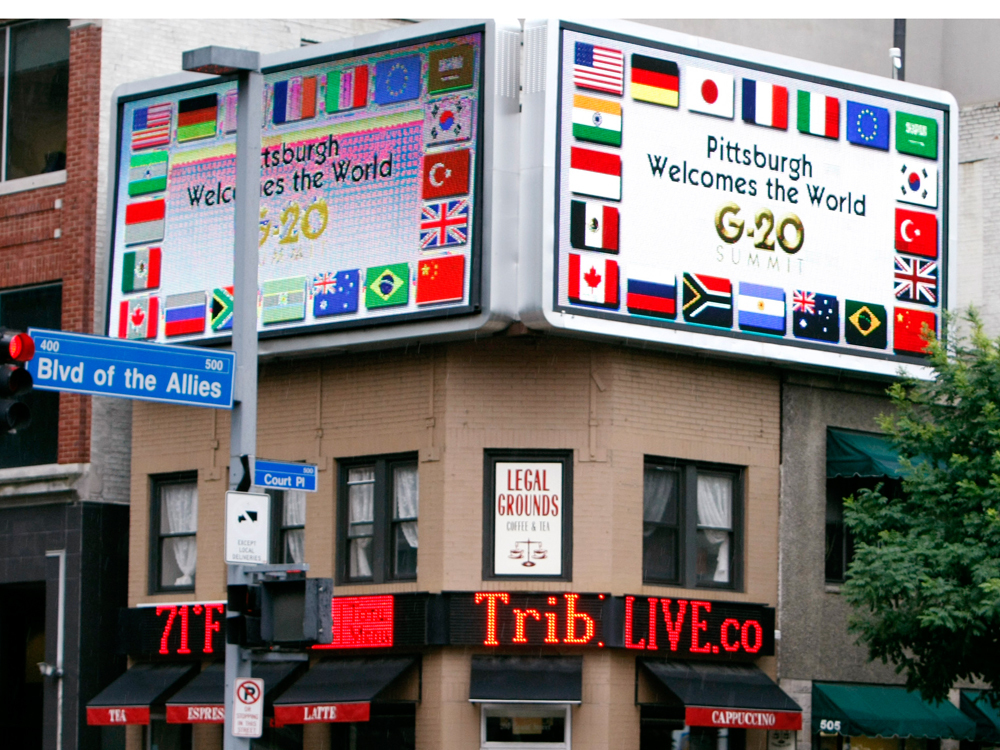 The economic meeting of leaders from the Group of 20 is scheduled to be in Pittsburgh on Sept. 24 and 25.

Leaders from the world's Group of 20 economies gather in Pittsburgh this week, and the city couldn't be more excited to welcome visitors.

"Everybody's getting their Steelers jerseys dry-cleaned," comedian Bill Crawford says. "They're watering their fake flowers, and they're ironing their terrible towels." Crawford was born and raised in the Steel City.

He's kidding, of course. Pittsburgh has spent months preparing itself for the dignitaries, journalists and protesters. Schools will be closed, people are being asked to work from home, and volunteers have been scrubbing sidewalks and putting up new coats of paint.

"They're doing a good job of 'redding up' the city — which is Pittsburgh terminology for cleaning up the city," Crawford adds.

Gail Shrott has been training one group of volunteers. This group's job is to answer questions from the international visitors. Questions about how to get around, where to eat — and even peculiarities of American culture.

"For example, if you look at what media we send abroad, it's pretty violent," Shrott tells NPR's Guy Raz. "They may be asking, 'Is it true that every American has a gun?' "

How would you answer that?

Shrott's quick answer is that no, that's not true. "A percentage of adults do have guns, but that doesn't mean every single American carries one," is her practiced reply.

Shrott's been compiling a cheat sheet for her volunteers with suggested answers for visitors' questions, including the frank ones. Try your hand at delivering Shrott's prepared answers with a straight face:

Why are there so many fat Americans?

The U.S. is currently working to address the issue of obesity. It is a complicated issue that relates to lifestyles, and eating a diet high in fat and calories, as well as physiological factors (including genetics). You will also notice that there are many Americans who are very concerned about good health and exercise regularly and make healthy choices when they eat.

How do Americans feel about President Obama?

Americans are free to express their opinions relating to politics. My personal view is ... You may find that other people may have different opinions. ("Your answer should be diplomatic and brief," Shrott's cheat sheet instructs.)

Do all Americans have guns?

Although many American movies that are exported to international audiences feature a lot of violence, not all Americans have guns. According to a Gallup Poll in 2008, roughly one-third of adults in the U.S. own guns. Many people choose to purchase guns legally for hunting or protection. The great majority of gun owners in the U.S. are responsible in the way that they use and handle their weapons.

Why do Americans seem to have a limited knowledge of world geography and world affairs?

In the last few decades, many American schools have not placed a great emphasis on world geography. Although there are opportunities for Americans to learn about world affairs, busy lifestyles may not always allow people to have as much time to read or listen to international news as they may need. There is a fairly limited amount of international news in most American newspapers. The Pittsburgh Summit 2009 has given people in the Pittsburgh region a great opportunity to learn more about current economic issues. We value the opportunity to talk with the international visitors in our community. There are excellent links to information about the G-20 at www.pittsburghg20.org. Another reason is that this is a huge, isolated country. We have English speakers to the north and Spanish to the south. Americans often do not travel outside the country but prefer to stay closer to home. The country has such variety that people do not feel the need to go too far. Foreign languages are not emphasized either.