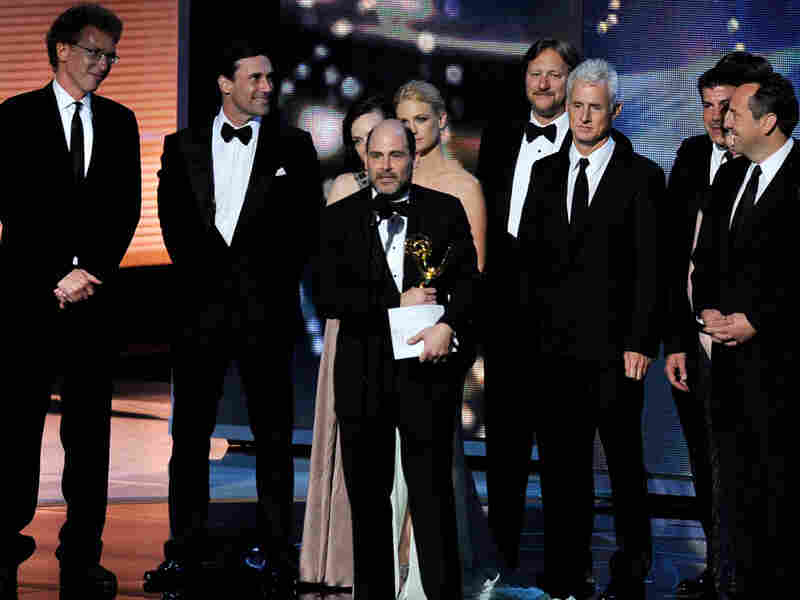 Creator and executive producer Matthew Weiner and the cast of AMC's Mad Men accept the Emmy for Outstanding Drama Series. This is the second consecutive year in which the series has won the award. Matthew Winter/Getty hide caption 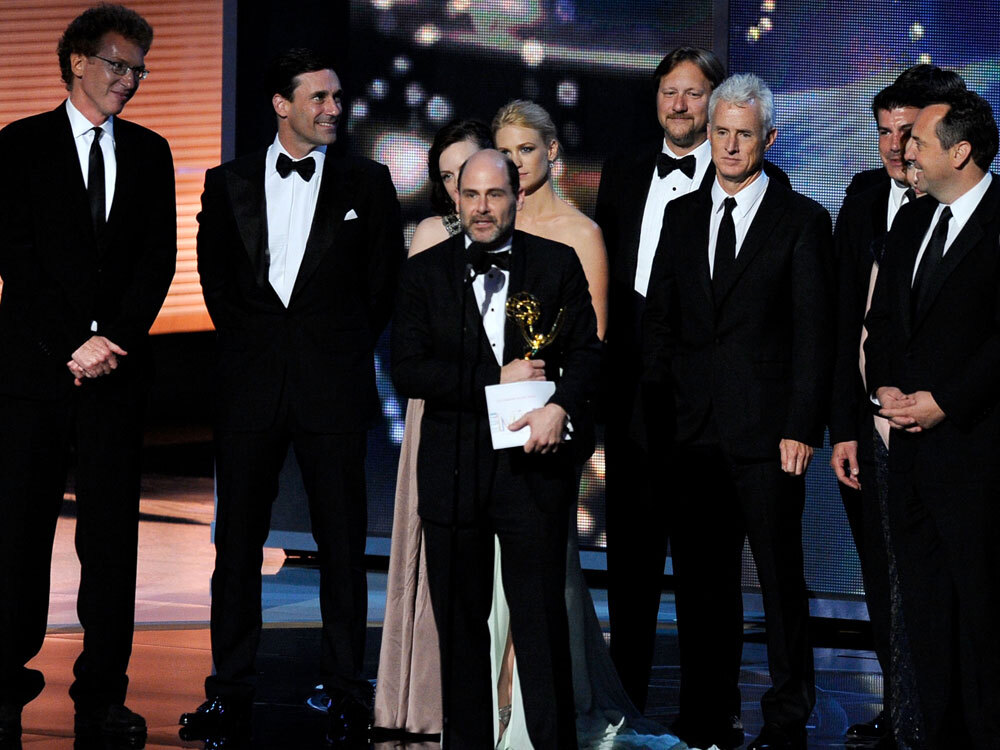 Creator and executive producer Matthew Weiner and the cast of AMC's Mad Men accept the Emmy for Outstanding Drama Series. This is the second consecutive year in which the series has won the award.

Last year's Emmy Awards show — the one hosted by a tag-team roster of reality-show hosts — was awful. Last night's, hosted by Neil Patrick Harris, was delightful.

But if you looked closely at what was happening and what was being being said as awards were handed out, you realized something big was going on. Broadcast TV was losing its grip, and the revolution was being televised.

Harris, in a terrifically confident and cocky turn as host, began the show with a fast-paced musical number that begged people to watch and put down their remotes. Julia Louis-Dreyfus, speaking for herself and co-presenter Amy Poehler, said they were "honored to be presenting on the last official year of network broadcast television."

And almost every award went to either a low-rated broadcast program or a show from cable, where audiences typically are limited to just a few million.

Multiple awards last night went to the telemovie Grey Gardens on HBO, the miniseries Little Dorrit from Masterpiece Classic on PBS, the low-rated 30 Rock on NBC, Jon Stewart's Daily Show on Comedy Central, and the critically adored Mad Men on AMC, which draws a very small — but very fervent — viewership. All of them are excellent TV shows, but not one of them reaches what, even in today's broadcast TV terms, is considered a sizable mass audience. Quality TV is becoming a boutique business.

The Emmy telecast did everything it could do disguise that and to keep things moving — and by the way, the idea to divide the evening by genres except for the top awards, and hand out most of the awards in a clump, was brilliant.

But as people from the well-made, not-very-well-seen TV shows kept picking up awards — Kristin Chenoweth for the cancelled-by-ABC Pushing Daisies, Toni Collette for Showtime's The United States of Tara, even Michael J. Fox for the FX series Rescue Me — it became clearer and clearer that the commercial broadcast networks, who once ruled in this arena, not only have lost their advantage. They've lost their way.

Matthew Weiner, whose Mad Men won the coveted Outstanding Drama Series award for the second year in a row, was being musically nudged off stage as the Emmy telecast was about to go a few minutes into overtime. But he had something to say that was very important, very true — and for the major broadcast networks, very disheartening.

"It is an amazing time to work in TV," Weiner told the assembled crowd. "And I know that everything is changing. But I'm not afraid of it, because I feel like all these different media — it's just more choice and more entertainment, and it's better for the viewers in the end. And I'm glad to be a part of it."

So what can CBS, NBC, ABC, Fox and the CW do to combat this trend? They can start — or they should start — by making better programs. And that's where the new fall season comes in.

The launch of the fall TV season used to be a time of great expectations. Not because of Charles Dickens adaptations (Little Dorrit notwithstanding) but because a generation ago, viewers were eager to sample, and maybe even embrace, the new stuff the networks were turning out. And the networks turned that new stuff out — in big, attention-getting lumps — in the fall to build giant audiences not only for the shows, but for the ads. Why the fall? Because that's when the Big Three automakers from Detroit rolled out their new models.

Now Detroit is a shadow of its former self, and so is broadcast television. This fall, among the more than two dozen new prime-time shows offered by over-the-air TV, there's not much about which to get really excited. I can save a lot of time by singling out just two that have won me over already.

One is Glee, the Fox musical comedy series I hope you've already seen, and added to your weekly viewing list. And the other is Modern Family, the single-camera, multi-family comedy that starts Wednesday on ABC. Its stars include Ed O'Neill from Married With Children and Julie Bowen from Ed, and it's a comedy that's not only laugh-out-loud funny, but commendably unpredictable.

The truth of the matter though, is that Matthew Weiner is right. At this point in TV history, there are more wonderful options on cable than on broadcast. HBO's Curb Your Enthusiasm, which began its latest season last night opposite the Emmys, is the can't-miss series of the season, and not just because of its Seinfeld reunion plot.

Showtime's Dexter returns next Sunday; Mad Men is still going on; and before long we'll have another season of AMC's spectacular Breaking Bad. And while broadcast TV took the summer off, cable gave us terrific seasons of True Blood, Rescue Me and others.

But even if cable is where it's at, the best shows on broadcast TV aren't receiving enough support — and for that, the blame belongs not with the networks, but with the viewers. Yes, ABC handled Pushing Daisies horribly after the writers' strike, but more people should have continued to support it. The death of NBC's Life, that excellent cop series starring Damian Lewis, was due to viewer apathy, not a lack of quality. And though 30 Rock keeps racking up well-deserved Emmys as best comedy, most people still refuse to watch it.

Edward R. Murrow's famous quote from Shakespeare's Julius Caesar, used when he denounced McCarthyism in the 1950s, applies just as well today when looking at the fate of commercial broadcast television. Perhaps, as the quote goes, "the fault, dear Brutus, is not in our stars but in ourselves."