Accessibility links
An Indian Doctor's Cure-All: Charlie Chaplin Ashok Aswani has been a fan of Charlie Chaplin for more than 40 years. Now, the practitioner of ayurvedic medicine heads a club of other equally serious fans of the silent-movie-era icon and uses Chaplin movies to help patients suffering from depression. 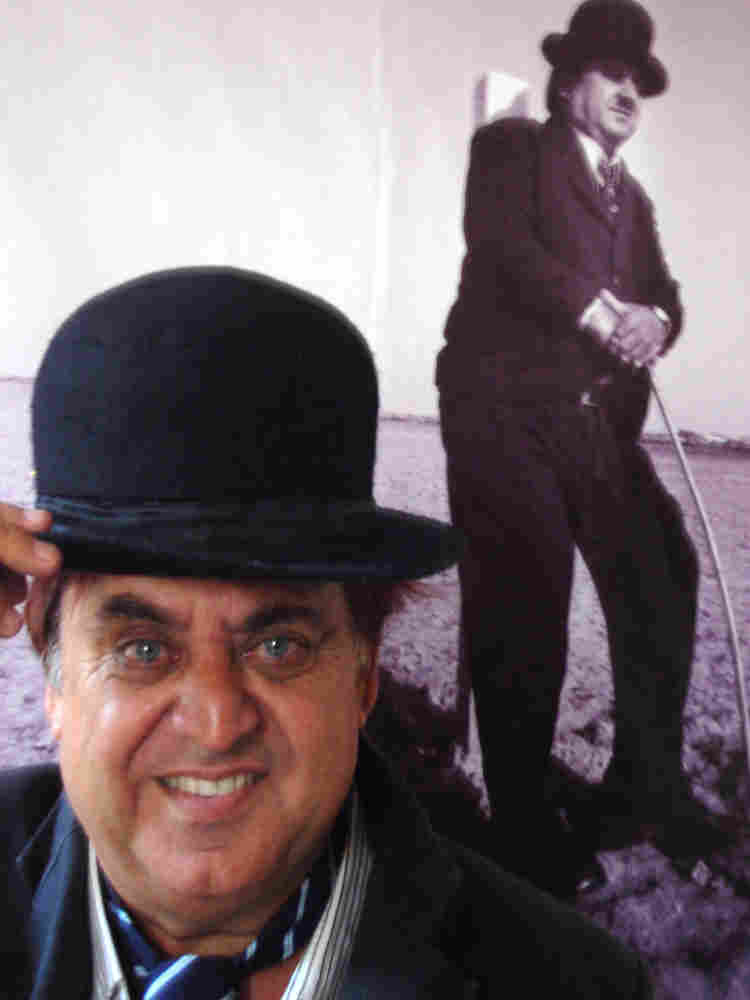 Ashok Aswani, a practitioner of ayurvedic medicine, prescribes Charlie Chaplin movies to help his patients. Aswani's fascination with Chaplin began more than 40 years ago. He also heads the Charlie Circle, a fan club that celebrates the anniversaries of Chaplin's birth and death. Philip Reeves/NPR hide caption

In India, laughing is a serious matter. There are laughing clubs — groups who gather in parks for a collective guffaw to relieve the stresses of daily life.

Ashok Aswani goes one step further: He hands out free DVDs of Charlie Chaplin movies to patients as a cure for depression.

"This makes them feel better," he says. "They enjoy it. The next visit, they ask for another movie."

Aswani, 59, practices ayurveda, the traditional medical system widely used in India for thousands of years. He has a tiny walk-in clinic in the industrial town of Adipur, in the western state of Gujarat.

He has also earned a big name for himself around town for dressing up in Chaplin regalia — bowler hat, cane, crooked tie and black baggy trousers — and performing Chaplin mimes, including the distinctive walk.

Aswani's fascination with Charlie Chaplin began some 40 years ago, when he saw The Gold Rush.

He liked it so much, he immediately bought a ticket for the next showing, although he was supposed to be at work — he was a typist at the time.

"I laughed and laughed and fell down on the ground," he recalls. "Three times I saw that movie, and next day I lost the job."

Since then, Aswani has seen The Gold Rush more than 200 times. His admiration for Chaplin remains undiminished.

"This was the greatest, greatest man on the Earth, I think. He was a good musician, good director, good editor, good actor, good writer, good mime artist," Aswani says.

Aswani now heads a club called the Charlie Circle, a group of fans aged between 14 and 72 who annually celebrate the anniversaries of Chaplin's death and birth.

They meet every few months in a cramped room above a photo shop facing a noisy and chaotic street to discuss Chaplin and watch his movies. Before each meeting, they pray to a large Charlie Chaplin cutout.

L.L. Chiniara, a retired government official and circle member, says Chaplin strikes a chord with many Indians because of the roles he performed.

"He's a common man; we are also common men. So that's why we were attracted to the Charlie, that's why only. And we love the Charlie!" Chiniara says.