Accessibility links
Deaths Prompt Italy To Rethink Troops In Afghanistan Italy marked a national day of mourning Monday as a state funeral was held for six soldiers killed in a suicide bombing in Afghanistan last week. The deaths were Italy's biggest single loss in an increasingly unpopular war and have stoked a debate on the future of Italy's participation in the NATO force in Afghanistan. 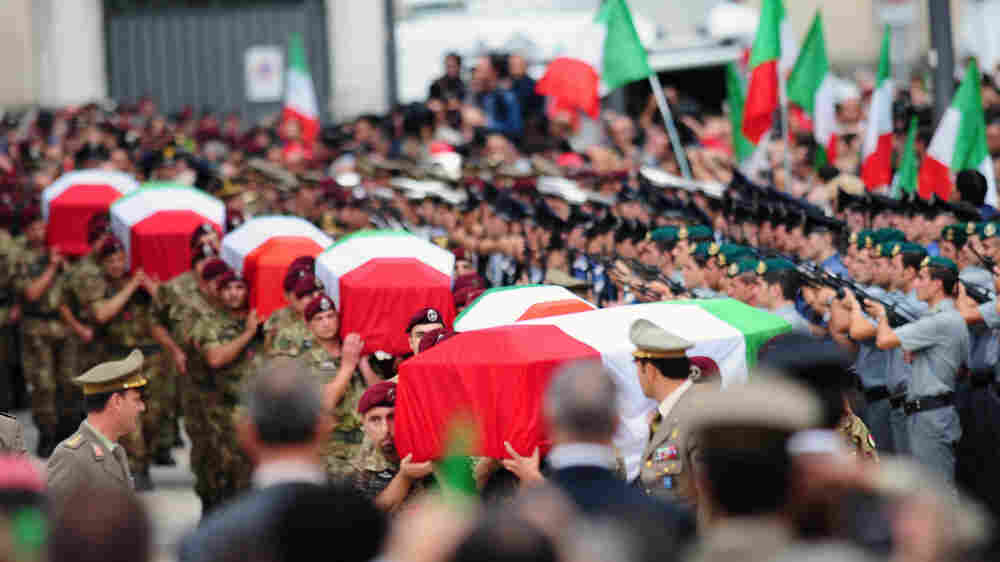 The coffins of six Italian soldiers killed Sept. 17 in one of the deadliest suicide attacks targeting NATO troops in Afghanistan are carried Monday at the end of the state funeral at Rome's Basilica of St. Paul Outside the Walls. Christophe Simon/AFP/Getty Images hide caption 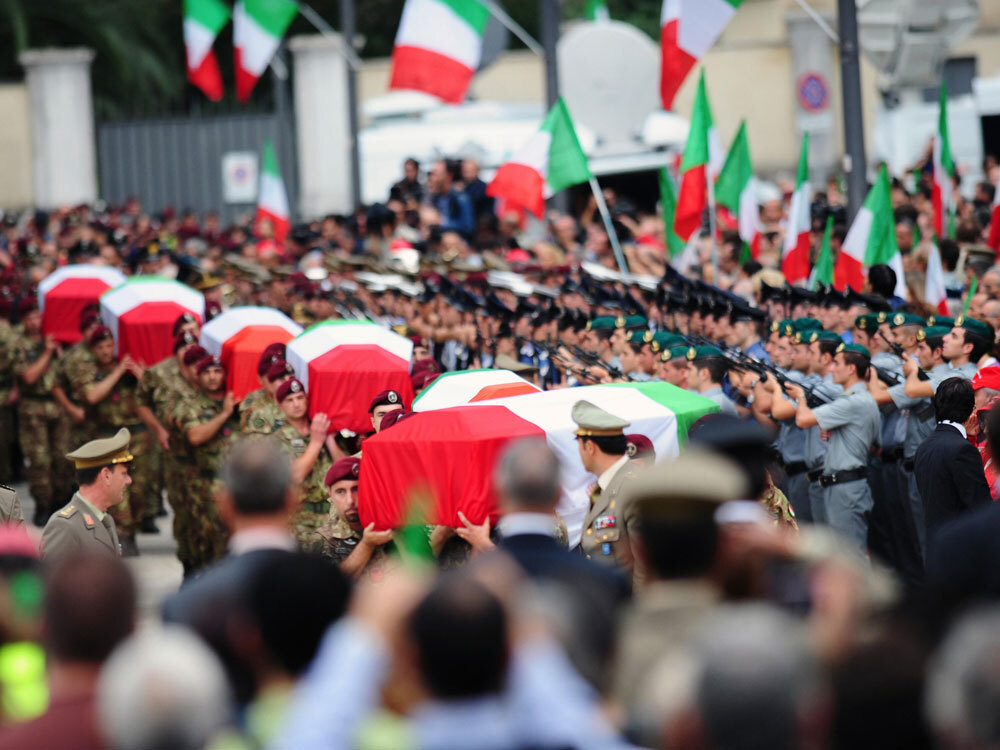 The coffins of six Italian soldiers killed Sept. 17 in one of the deadliest suicide attacks targeting NATO troops in Afghanistan are carried Monday at the end of the state funeral at Rome's Basilica of St. Paul Outside the Walls.

Italy marked a national day of mourning Monday for six soldiers killed in a suicide bombing in Afghanistan last week. The deaths were Italy's biggest single loss in the war and have stoked a debate on the future of Italy's participation in the multinational force in Afghanistan.

The soldiers' deaths have unleashed an outpouring of emotion in a country where the Afghan mission is increasingly unpopular.

A poll taken before the attack showed 55 percent of Italians oppose the deployment.

After the bombing, Umberto Bossi, leader of the Northern League, which is arguably the most influential member of the ruling coalition — called for a speedy pullout.

"The problem is that it seems impossible to export democracy. I hope that our boys will be home by Christmas," Bossi said, according to the ANSA news agency.

Italian Prime Minister Silvio Berlusconi said Italy will not unilaterally withdraw its 3,000 troops. But he suggested a change in allied strategy.

"It's now time to meet with our allies to draft a transition strategy and a program that would help the Karzai government to gradually take responsibility for the country's security and allow the allies to reduce their troop numbers in Afghanistan," Berlusconi said in televised comments Thursday, after the deaths.

Mourners gathered at Rome's Basilica of St. Paul Outside the Walls on Monday. Many waved the green, white and red Italian flag as fellow soldiers carried the coffins into the church.

An unidentified man briefly disturbed the ceremony when he rushed to the altar, grabbed the microphone and chanted, "Peace now."

Government and parliamentary deputies, members of the armed forces and leaders of all the major political parties were on hand for the state funeral.

Under both the current center-right government and preceding center-left coalition, the Italian public has been told that Italian troops went to Afghanistan in 2002 not to fight a war, but on a peacekeeping mission.

The ambiguity has haunted the country since then, says Roberto Menotti, a senior research fellow at the Aspen Institute Italy.

"No government here has been ready and able to clearly explain this gray area between peacekeeping, peace enforcement and combat operations. This has always been left ambiguous deliberately. I personally believe it has been a very dangerous decision from the beginning to leave it so vague," Menotti says.

Italy is not alone in wondering about its future in Afghanistan. There is similar debate in Germany, which has more than 4,200 troops deployed. The mission became even more unpopular after a German-ordered airstrike earlier this month in the northern province of Kunduz, in which civilians appear to have died.

But, Menotti says, Germany is also not planning a unilateral pullout.

"The idea there, just like in Italy, is it is a coalition mission. If it changes, it changes because there is a coordinated decision to change the policy, the strategy. The idea is no one right now intends to leave right away, intends to go it alone," he says.

Under their respective constitutions, the mandates of both the Italians and Germans in Afghanistan stipulate that soldiers can open fire only when under attack, as compared to the proactive strategy of British and American soldiers.

Menotti says there is no likelihood Germany and Italy will increase their deployment. But he says the latest deaths on the Afghan battlefield might help convince European public opinion that serious combat operations are part and parcel of a peacekeeping operation.

"With Europeans, the key will be to make sure that they remain involved in the most dangerous elements of the mission, not so much that they provide more troops," he says.