Accessibility links
White House, Pentagon Tensions Rise On Afghanistan Tensions are building between the Obama administration and some in the military over how to respond to Gen. Stanley McChrystal's report that recommends a troop surge to salvage the Afghanistan mission. Analysts say Obama has some time to sort out a strategy, but not more than a month or two. 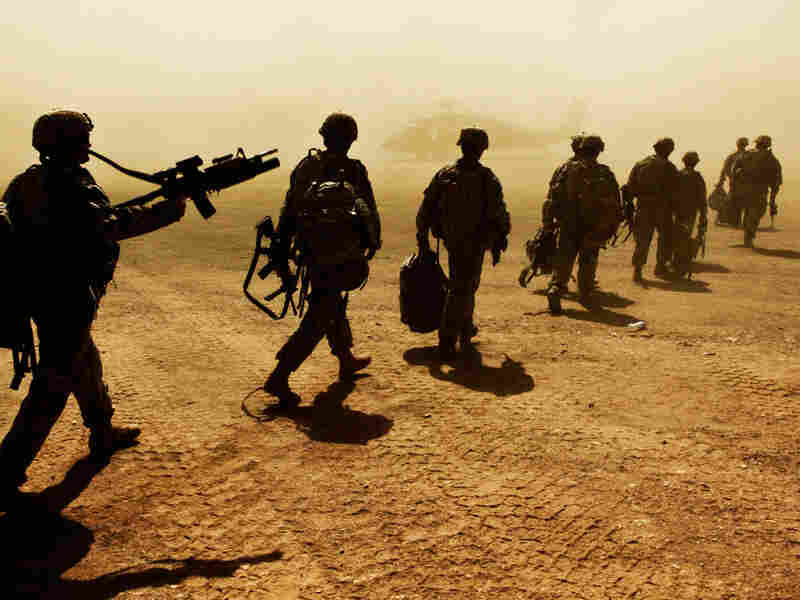 Members of the Army's 10th Mountain Division board a Black Hawk helicopter in Wardak province, Afghanistan. President Obama has deployed thousands of additional troops to Afghanistan, and his top general says even more are needed. Dima Gavrysh/AP hide caption 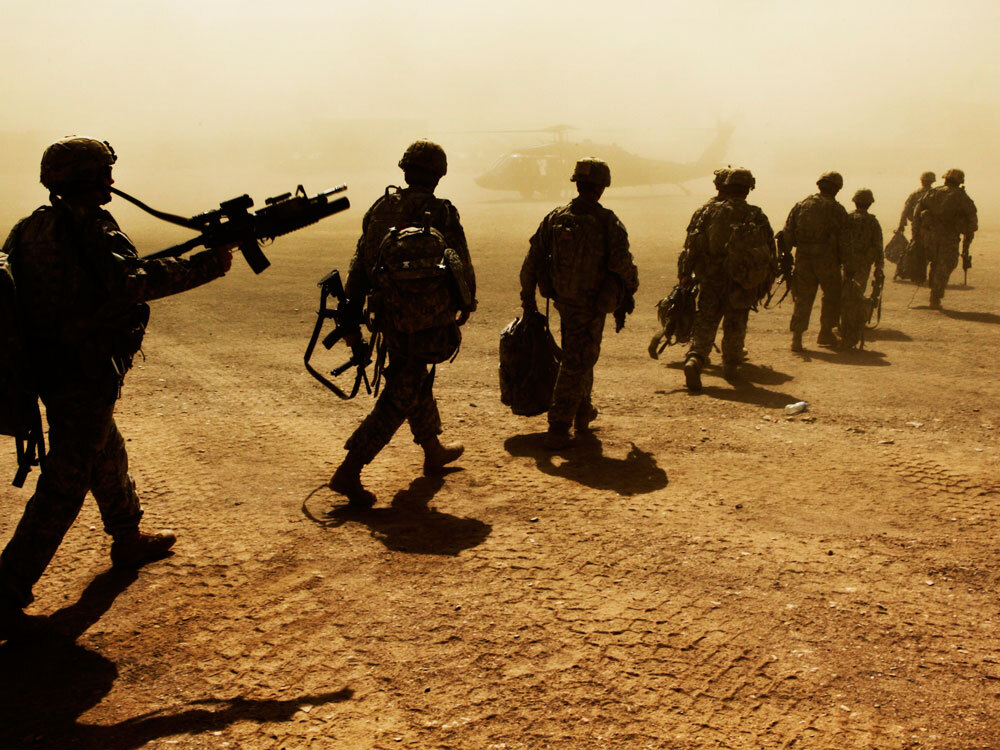 Members of the Army's 10th Mountain Division board a Black Hawk helicopter in Wardak province, Afghanistan. President Obama has deployed thousands of additional troops to Afghanistan, and his top general says even more are needed.

As fallout over a leaked report from his top commander in Afghanistan continues, President Obama is facing the first real test of his relationship with the military.

Tensions are building between the administration and some in the military — and inside the White House itself — over how to respond to Gen. Stanley McChrystal's report that recommends a troop surge to salvage the Afghanistan mission.

In his grim assessment, first reported this week by The Washington Post, McChrystal writes that "inadequate resources will likely result in failure." The report surfaced amid Obama's own public comments this week about rethinking his ambitious strategy in the eight-year war.

Those tensions are expected to intensify in coming days. The Wall Street Journal reported Tuesday what has been whispered for weeks: The administration has asked McChrystal to delay submitting his additional troop request, which could reach 40,000, until Obama reviews and perhaps alters his war strategy.

"In many ways, the president's decision on McChrystal's recommendations will be a bellwether," says Pete Hegseth, an Iraq war veteran who heads Vets for Freedom, a political action committee. "The military has heard him say this is a war we must win, a war of necessity, and critical to our national security."

If he ignores the recommendations of his handpicked general, Hegseth says, the president risks confusion about what he wants as commander in chief.

According to government officials who spoke with NPR's Tom Bowman, there is wide agreement with Obama's speech in March in which he said the U.S. must "disrupt, dismantle and defeat" al-Qaida. But the road divides on how to get there and the questions of strategy come as public support for the war in Afghanistan continues to decline.

As the president considers the deteriorating security situation in Afghanistan, he also faces increasing political pressure from a growing number of Democrats who oppose a troop increase and many conservatives urging him to give his general what he wants.

"This is one of the more complicated debates in recent American history," says Michael O'Hanlon a national security expert at the liberal Brookings Institution.

"And the president does have other things on his plate — and, frankly some, like the economy and health care, are comparably important," O'Hanlon says. "But this is a crucial moment for him; he is ultimately responsible."

During his campaign and in the early months of his presidency, Obama repeatedly declared his commitment to the military and civilian mission in Afghanistan that he inherited from the Bush administration. "A war of necessity," is what Obama called it, that would ensure Afghanistan would not come under Taliban control.

"If the Afghan government falls to the Taliban or allows al-Qaida to go unchallenged, that country will again be a base for terrorists who want to kill as many of our people as they possibly can," he said in a March speech.

The new president retained the respected Bush-appointed defense secretary, Robert Gates, approved the deployment of 21,000 additional troops and has generally acquiesced to the requests of his military leaders.

But now, with more than 60,000 U.S. troops in Afghanistan, the security situation has only gotten worse. The government of President Hamid Karzai is tainted by allegations of corruption, and last month's presidential election is widely disputed and marred by claims of fraud. Security remains elusive, and well-documented failures in nation building have left the president in a delicate position.

"He has been criticized in the past for using his position on Afghanistan to show he's strong," says Hegseth. "Now his rhetoric is coming to fruition."

At the conservative Heritage Foundation, analyst James Carafano says Obama "has to send troops, and he has to send them now."

Carafano echoes the sentiment of many conservatives who also have criticized Republicans for not pushing back harder on some of Obama's choices on defense, such as supporting Congress's decision to cancel the F-22 fighter jet program and scrapping a European missile defense system.

But Anthony Cordesman, of the Center of Strategic and International Studies, says Obama is also hearing from political allies who wonder whether America's continued military involvement in Afghanistan is worthwhile.

Cordesman traveled to Afghanistan earlier this year and came back to report that efforts there are "dysfunctional" and have wasted "vast amounts of money." He says there are no clear dividing lines over what to do in Afghanistan — even among some military officials.

The leak of McChrystal's report has crystallized the debate, and, in some ways, awakened a country generally not engaged in or affected by the eight-year conflict.

Analysts say Obama has some time to sort out a strategy, but not more than a month or two.

"Obama deserves a little more time to think this through," says O'Hanlon. He notes that the military this year has given the president different assessments of troop requirements and should understand why the White House would "want to understand why the new numbers should work any better than the old ones."

"This involves a huge set of decisions," he says.