Accessibility links
Day At U.N. Underscores Obama's Challenges In New York for his first visit to the U.N. since becoming president, Barack Obama spent time meeting with other world leaders. He also addressed the U.N. Summit on Climate Change. With progress stalled on Middle East peace talks as well as climate change, it was a day that underscored the challenges Obama faces.

In New York for his first visit to the U.N. since becoming president, Barack Obama spent time meeting with other world leaders. He also addressed the U.N. Summit on Climate Change. With progress stalled on Middle East peace talks as well as climate change, it was a day that underscored the challenges Obama faces.

DON GONYEA: This is Mr. Obama's first time at the United Nations as president. It's a week to build on connections made in his already extensive overseas travel, but the week also underscores just how hard progress can be to come by: take the Middle East, where things are at a standstill. Today, posing for pictures with the Israeli Prime Minister Benjamin Netanyahu and Palestinian Authority President Mahmoud Abbas, the president could only restate his goals and urged that talks be revived.

BARACK OBAMA: Simply put, it is past time to talk about starting negotiations. It is time to move forward. It is time to show the flexibility and common sense and sense of compromise that's necessary to achieve our goals.

GONYEA: Polls show that Mr. Obama is extremely popular around the globe, but that doesn't melt away old divisions abroad or at home. In fact, some of his own major diplomatic priorities on issues such as climate change are competing for attention with domestic issues, like health care, back home. At this morning's U.N. climate change summit, the president used his speech to stress that no nation, wealthy or poor, will escape the impact of global warming.

GONYEA: He said developing nations need to commit to reducing carbon emissions. They've been reluctant to do so out of fear of hurting the economic growth that can pull people out of poverty. But the president argued that global climate rules cannot exempt such nations.

OBAMA: Their future is no longer a choice between a growing economy and a cleaner planet because their survival depends on both.

GONYEA: Following the speech, the administration's top environmental advisors met with reporters. Todd Stern is the U.S. State Department's Special Envoy for Climate Change. He says for the fight against global warming to succeed it's critical that developing nations buy in.

TODD STERN: They also have to take actions and they have to stand behind those actions to the same degree that the United States and the developed countries do. He is making that very clear and that has not traditionally been the way that the climate-change negotiations and the whole climate change international debate has gone on.

GONYEA: The president said the U.S. will do its part. Still, his own climate-change policy included in an energy bill that has passed the U.S. House faces big obstacles in the Senate. Carol Browner is the president's energy and climate change czar. She acknowledges that the legislation is competing with other pressing domestic matters.

CAROL BROWNER: You know the health care has obviously taken up more time than was originally anticipated.

GONYEA: Ms. BROWNER You know, you all follow Congress, you know, we all know that how the schedule works and Congress can change abruptly. It can go faster. It can go slower. What we need is comprehensive legislation and we're going to do our best to get it as soon as we can. 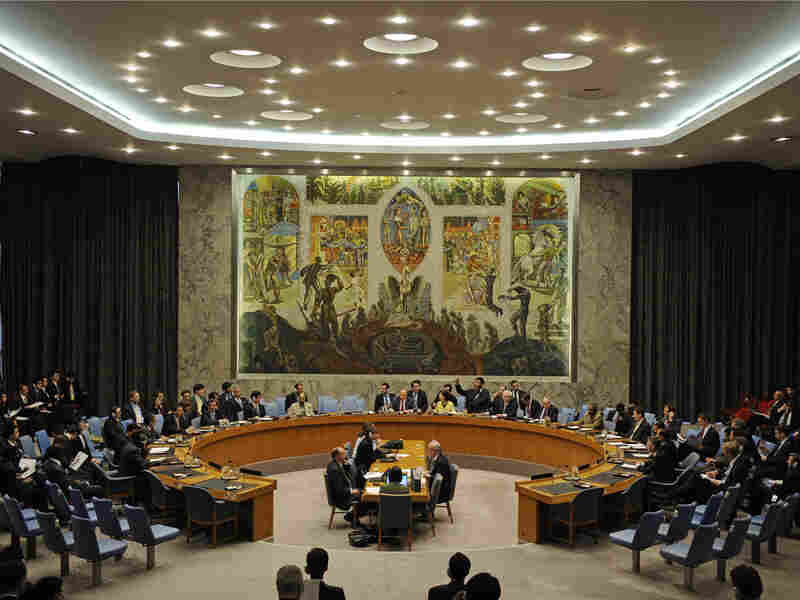 President Obama will chair a summit of leaders of the 15 nations that are members of the U.N. Security Council, shown here during a meeting in April. Emmanuel Dunand/AFP/Getty Images hide caption 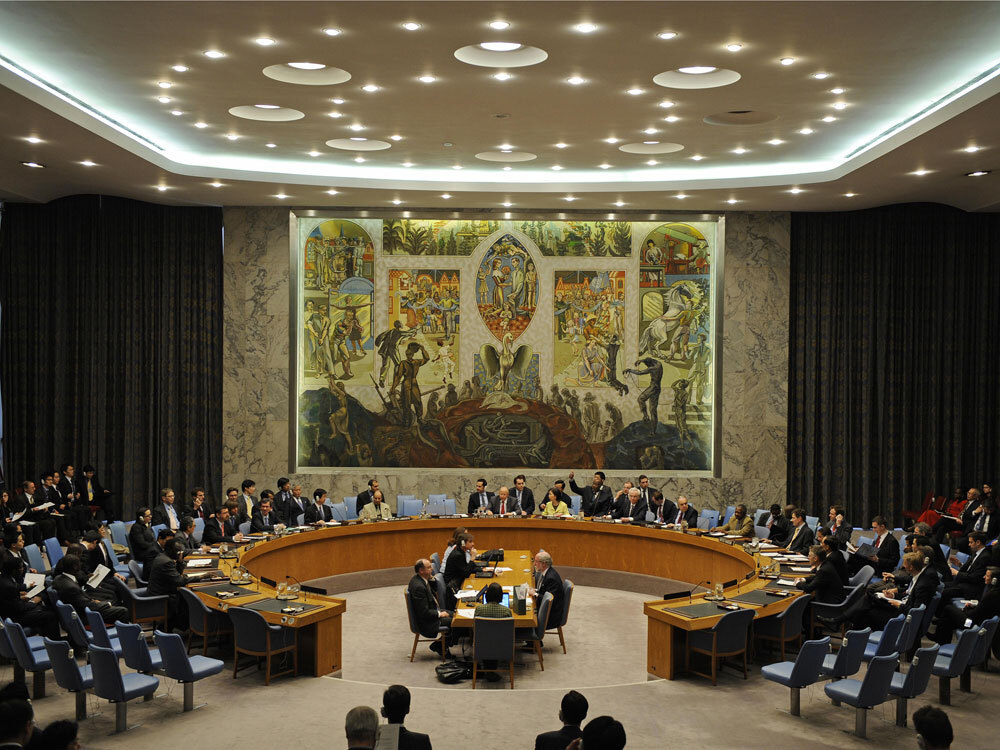 President Obama will chair a summit of leaders of the 15 nations that are members of the U.N. Security Council, shown here during a meeting in April.

President Obama appears before the United Nations for the first time at this week's annual session of the General Assembly. He will be trying out a more cooperative tone than during the Bush era, but facing an array of foreign policy challenges.

Here's a closer look at some of the issues the president will be confronting, some of which have vexed his predecessors and defy an easy fix in the U.N. meetings in New York and in the Group of 20 leaders' summit in Pittsburgh later in the week.

U.N. Secretary-General Ban Ki-moon is convening a meeting Tuesday to draw attention to climate change in the run-up to international talks on the issue in Copenhagen in December.

NPR's Don Gonyea Reports On Obama's Day At The U.N.

The meeting is expected to draw heads of state from more than 100 nations, including the leaders of the two biggest emitters of so-called greenhouse gases, China and the United States.

Obama is expected to reaffirm his commitment to a greener U.S. economy in a speech to the assembly, but he may not offer much in the way of specifics, because progress on climate change policy has taken a back seat to the domestic debate over health care.

China's President Hu Jintao is expected to unveil new plans for addressing global warming, and U.N. officials are hoping he will pledge to cut carbon emissions according to a formula based on national income.

Leaders of developing nations are expected to press the industrial giants to share some of the financial burden of curbing emissions. 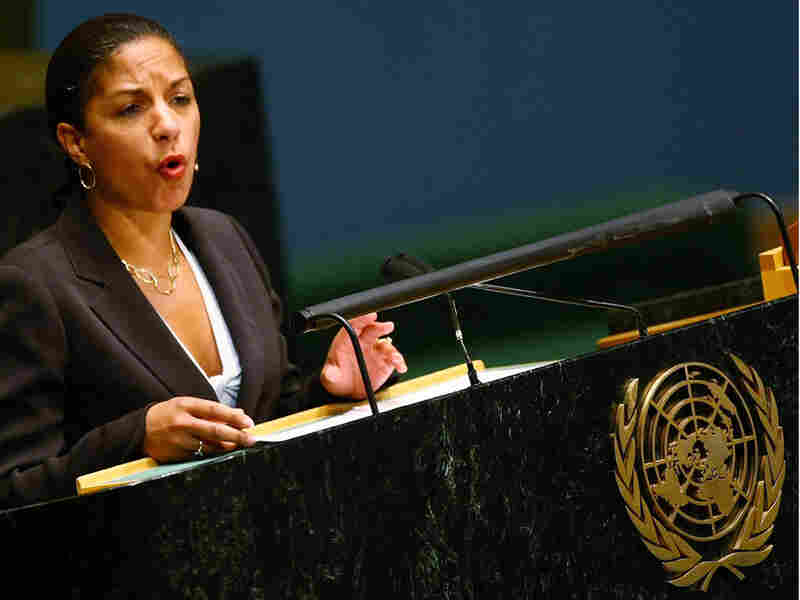 America's U.N. Ambassador Susan Rice will be joined by President Obama and Secretary of State Hillary Clinton this week for an ambitious agenda at the U.N. General Assembly in New York. Chris McGrath/Getty Images hide caption 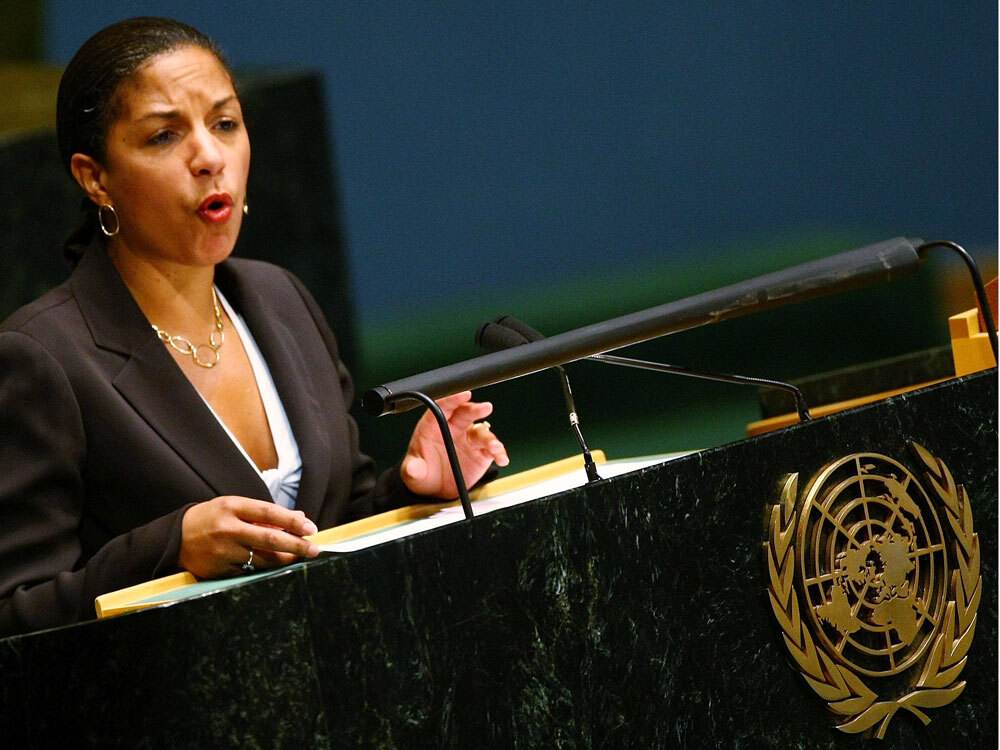 America's U.N. Ambassador Susan Rice will be joined by President Obama and Secretary of State Hillary Clinton this week for an ambitious agenda at the U.N. General Assembly in New York.

Obama and Iranian President Mahmoud Ahmadinejad will be in the same city this week, but don't expect any cordial meeting of the two leaders.

Secretary of State Hillary Clinton says that the U.S. plans to step up pressure on Iran on multiple fronts in an effort to force it to prove that its nuclear program is intended exclusively for peaceful purposes. She also criticized what she called the Iranian government's "campaign of politically motivated arrests, show trials and suppression of free speech" after the widely disputed presidential election in June.

The declared winner of that election, Ahmadinejad, has used the U.N. General Assembly in the past to defy Western efforts to curb Iran's nuclear program. Analysts say it is possible that he will attempt to seize the opportunity to reassert himself in the wake of the election.

But William Hartung, director of the Arms and Security Initiative at the New America Foundation, says he doesn't think any efforts at the U.N. this week will affect Iran's willingness to negotiate or other nations' willingness to tighten sanctions on the Islamic republic.

"The fact that the president is putting this high on his agenda might bring something over time," Hartung says, "but I would be surprised if there were any immediate results."

A meeting has been planned for Wednesday with President Obama, Israeli Prime Minister Benjamin Netanyahu and Mahmoud Abbas, the Palestinian Authority president.

But Obama's Middle East peace envoy, George Mitchell, returned empty-handed last week from a mission to the region, and experts are doubtful that this face-to-face meeting will bring any breakthroughs.

Analyst Shibley Telhami says he thinks the high-profile nature of the meeting may actually work against getting an agreement, since both the Palestinian and Israeli leaders have been under pressure from their own sides to not give in.

Barring any surprises, the Obama administration will have come to an end of this phase of its efforts to restart the peace process and seek a new strategy, says Telhami, a professor of government at the University of Maryland.

"There's an assumption from the president on down that this is too important to the U.S. to sit back and do nothing," Telhami says.

Obama will chair a special meeting of the U.N. Security Council on Thursday, focused on stopping the spread of nuclear weapons and reducing existing arsenals of nuclear bombs.

It is expected to be attended by the heads of state of all 15 Security Council member nations, and Obama will introduce a draft resolution outlining ways that the council can help prevent proliferation.

It includes a paragraph saying that membership in the non-proliferation regime is irreversible — that is, countries cannot join the system while they are building up their peaceful nuclear industries, then opt out if they decide to use that technology to make weapons.

It is a provision aimed at Iran, which insists that it is enriching nuclear fuel only for use in peaceful reactors, but which the U.S. and other nations suspect is on its way to developing a nuclear bomb.

Obama will have to "convince an international audience that he's serious about reducing our own stock of nuclear weapons," says Joseph Cirincione, president of the Ploughshares Fund, a foundation that aims to stop the spread of nuclear arms.

Obama also will have to convince a domestic audience that reducing weapons will ultimately make the U.S. safer, Cirincione says.

Cirincione says he thinks the draft resolution could lay the groundwork for definitive negotiations next year.

The Obama administration is far more U.N.-friendly than the Bush administration was, but Secretary of State Clinton acknowledged that the yearly meeting of world leaders has sometimes produced little more than rhetoric.

"As President Obama leads our U.S. delegation at this year's General Assembly, I hope we can demonstrate that the United Nations does not have to be just a diplomatic talk shop on First Avenue."