Accessibility links
The Nation: Pittsburgh G-20 Police Presence Strong As barricades are put into place and the police presence downtown becomes more noticeable, few people on the ground in Pittsburgh seem confident that the court will remove impediments to this week's protests. 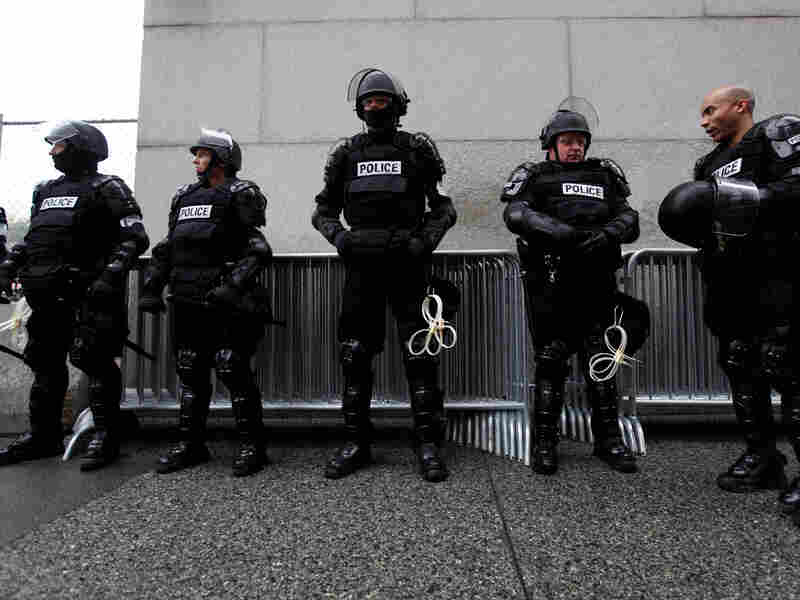 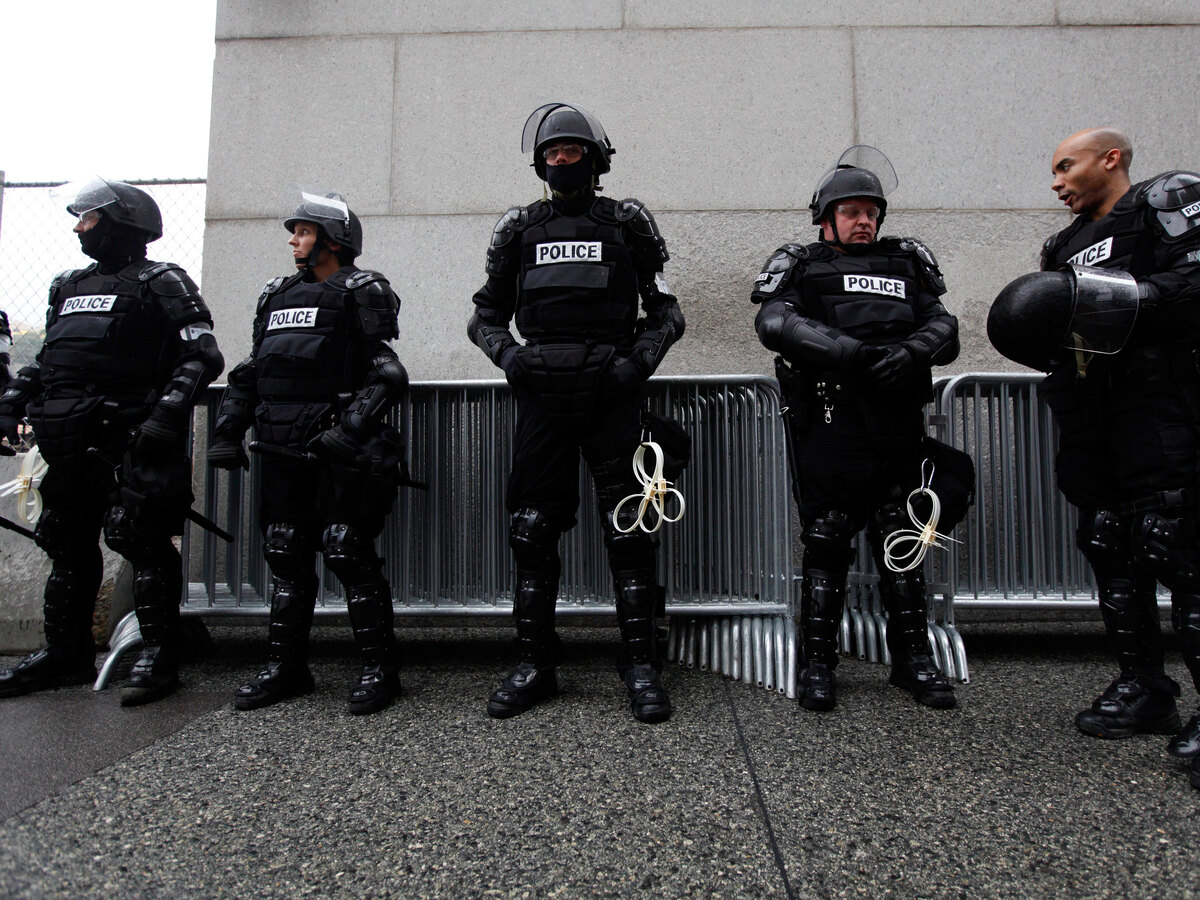 Pittsburgh plays host this week to the G-20 summit, a gathering of leaders of the world's largest national economies and the European Union. And, as with many past international summits, protest groups are embroiled in legal battles over their ability to voice opposition to international political and corporate elites.

On Tuesday morning, lawyers for the ACLU of Pennsylvania and the Center for Constitutional Rights presented arguments before US District Court Judge Gary Lancaster describing a pattern of unconstitutional searches and seizures on the part of local law enforcement against two protest groups — the Seeds of Peace Collective and the Three Rivers Climate Convergence (3RCC).

The ACLU/CCR suit, filed Monday, details how over the past several days Seeds of Peace workers have been systematically harassed by Pittsburgh police. This past Friday, police confiscated a school bus from which the group serves food to demonstrators. The group was able to retrieve the bus later that night but only after paying a fine. On Sunday, the Pittsburgh residence where the group was based was raided by more than thirty police officers armed with submachine guns, who demanded to search the premises for weapons.

Seeds of Peace Collective member Max Granger told The Nation: "By providing logistical support, primarily food and medical assistance for social justice mobilizing, Seeds of Peace is playing an integral role in making it possible for people to express their First Amendment rights. Because of this, we have become a primary target for those who wish to repress this expression, such as the Pittsburgh Police, Secret Service and Homeland Security."

As of Tuesday at 3 pm, Judge Lancaster had not issued a ruling on the ACLU/CCR request for an injunction against further unconstitutional searches and seizures by Pittsburgh police.

Several groups, including 3RCC, have been denied permits for overnight camping in city parks during the week of demonstrations. The city has restricted use by protesters of several city parks to the hours of 6 am to 11 pm. 3RCC has set up a Climate Convergence Camp in Pittsburgh's Schenley Park. Another encampment highlighting the plight of women refugees, set up by Code Pink, is located in downtown Pittsburgh's Point State Park.

Tuesday's legal arguments are the latest in a long-running legal confrontation with the City of Pittsburgh in the run-up to this week's protests. For several weeks protest groups have been unable to acquire city permits for use of several public parks and for protest routes that allow demonstrators to march within sight and sound of the G-20 conference.

Meanwhile, even legally permitted protests have faced severe constraints by local law enforcement. On Sunday evening, a 400-person march demanding that the G-20 pay greater attention to the plight of workers who have lost their jobs as a result of the international financial crisis was momentarily halted by police, who alleged that the group did not have a permit, which it did have. Then on Tuesday morning the police similarly blocked an interfaith march downtown, which was also legally permitted. Police said they were responding to a request by convention center staff to route the march away from the facility.

Witold Walczak, state director of the ACLU, pointed out to the Pittsburgh Post-Gazette that the area around the convention center "isn't private property; it's public property. It's a through street, and they had a permit."

He added: "The more distressing thing for me is that the first two demonstrations that were the subject of a federal court lawsuit got bungled by the police, and bungled in a way that they tried to restrict activity. It's either sheer incompetence or something more insidious. It's one or the other, and neither is very flattering."

David Meieran, an organizer with 3RCC, described to The Nation the level of police intimidation during the group's activities. "Not only have we not received our permit," he said, "but the vehicles that are related to our climate camp, including the [vehicle belonging to] Seeds of Peace, have been continually harassed by police, some with assault weapons, from many different law enforcement agencies."

Explaining the rational for the ACLU/CCR suit, Meieran said, "We're now back in court demanding that the judge enjoin the city against further harassment, confiscation of vehicles and arrests."

As barricades are put into place and the police presence downtown becomes more noticeable, few people on the ground in Pittsburgh seem confident that the court will remove impediments to this week's protests.