Accessibility links
U.S. Navy Sailors Say They Were Hazed, Abused Six sailors from a canine unit in the U.S. Navy interviewed by Youth Radio told stories of hazing and abuse a few years ago. The Navy investigated the abuse and found evidence to support accusations of physical assault on sailors and prostitutes on base, but no courts-martial resulted. 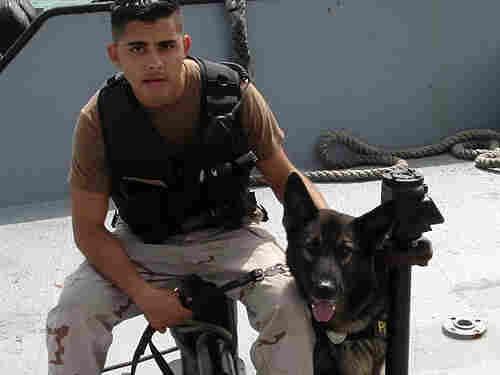 Joseph Rocha, who enlisted in the U.S. Navy in 2004 and became a dog handler with one of the Navy's biggest kennels, says he entered a culture of hazing and abuse at the hands of his fellow service members. Courtesy of Joseph Christopher Rocha hide caption

In the summer of 2005, at a U.S. Navy base on the island of Bahrain in the Persian Gulf, a young man was duct-taped to a chair, and then left in a kennel with dogs barking and feces all around. Later, he was forced to simulate sex acts on videotape.

He was not a detainee. He was a U.S. sailor: Joseph Christopher Rocha.

Rocha enlisted in the U.S. Navy on his 18th birthday in 2004. He remembers being excited about his first overseas assignment: to serve in Bahrain. He became a dog handler with one of the Navy's biggest kennels. But Rocha says once he got there, he entered a culture of hazing and abuse at the hands of his fellow service members that made him feel like the animal.

"I was hog-tied to a chair, rolled around the base, left in a dog kennel that had feces spread in it," Rocha says.

Rocha says six weeks into his deployment, when he made it clear he wasn't interested in the unit's parties with prostitutes, the chief master-at-arms, Michael Toussaint, and others on the base made him a target.

"I was in a very small, high-testosterone-driven unit of men," Rocha says. "I think that's what began the questioning, you know, 'Why don't you want to have sex with her? Are you a faggot?' "

The hazing escalated across the unit, he says. Incidents ranged from spraying down uniformed personnel with hoses to directing sailors to simulate sex acts on videotape. Petty Officer Shaun Hogan, who was stationed in Bahrain with Rocha, remembers a so-called training video that sailors were ordered to produce.

"Petty Officer Rocha and another junior sailor ... they were instructed to go into a classroom by Chief Michael Toussaint, who orchestrated the entire training. And Chief Toussaint asked them to simulate homosexual sex on a couch," Hogan says.

Hogan played a handler barging onto the scene with his dog. Rocha says Toussaint coached him on how to act in the video.

"Telling me I needed to be more believable, act more queer, have a higher-pitched voice, and make the sounds and gestures more realistic," Rocha says.

The hazing got worse, but Rocha was afraid reporting it would lead to an investigation into whether he was gay.

Youth Radio has interviewed six sailors from the canine unit. They all tell similar stories of abuse.

One sailor, who would talk on tape only if we changed her voice, remembers seeing a different sexually charged video. In it a female sailor was ordered to role-play as the lover of another female in the unit, who was handcuffed to a bed and appeared naked under the sheets.

I was hog-tied to a chair, rolled around the base, left in a dog kennel that had feces spread in it.

"My impression was, 'What on earth are these people thinking?' How is this going to be valid training for her to play — and I'm going to quote here, 'a bitchy lieutenant'? — It was very disgraceful," the female sailor said.

All six sailors Youth Radio spoke with were afraid to report the abuse. They say that Toussaint threatened to revoke their dog certification if they complained. And some feared the worst. They remembered his warning, "God help anyone who airs our dirty laundry."

Finally, in 2006, one sailor broke through the silence and reported an assault. The Navy commissioned an independent investigation that uncovered the hazing and other abuses.

The investigation's findings, obtained through the Freedom of Information Act and corroborated by Youth Radio's interviews, show the abuse was widespread in the unit, and in some cases sanctioned and instigated by its leadership.

The investigation found evidence to support accusations of physical assault on sailors and, in two instances, prostitutes on base. The documents also show systemic hazing through humiliation and unnecessary labor.

The incidents that occurred within the Military Working Dog Division at Naval Support Activity Bahrain do not reflect who we are as a Navy. They are considered an anomaly based on sailors who were improperly led.

The conclusions and recommendations of the investigation are redacted in the report. To fill in the blanks, Youth Radio called the Navy's regional spokeswoman, Lt. Cmdr. Wendy Snyder. She said she couldn't give details of specific disciplinary actions. And that because the investigation took place more than two years ago, the records are no longer available.

"Whether they're shredded or destroyed, I don't know," Snyder said. "As far as I know, the investigation was completed, and the outcomes I don't know of those individuals involved."

Since then, a Navy officer familiar with the case has told NPR that the report recommended courts-martial for both Toussaint and another noncommissioned officer from the unit. The recommendation for courts-martial was never followed. Instead, the case was closed, and Toussaint received a "non-punitive letter of caution" — the military's equivalent of a slap on the wrist.

What's more, Toussaint has been promoted to the rank of senior chief petty officer.

Youth Radio asked Yale law professor Eugene Fidell, who is president of the National Institute of Military Justice, to review the investigation's Findings of Fact and give his opinion on the Navy's follow-up.

"It did seem to me [from the materials that were made available] that some criminal punishment under the UCMJ [Uniform Code of Military Justice] was called for. It looked to me like rampant misconduct of a kind that was utterly incompatible with military service on behalf of our country," Fidell said.

Fidell served as a judge advocate and has made a career of reviewing military justice cases.

"I would expect anybody in pay grade petty officer and above to be held accountable," he said. "These people have responsibilities, they are supposed to be leaders, we depend on them, and if they're either engaging in this kind of misconduct or tolerating it, they need to be taught a lesson."

Meanwhile, unit members interviewed by Youth Radio are still struggling with the aftermath of their experiences in Bahrain.

Hogan, the sailor who played the dog handler in the simulated-sex video, is now in the Navy Reserve. He says he's haunted by personal guilt.

"I was duty-bound to protect those under my command — Petty Officer Rocha [and] several others. I have a lot of regret for not having spoken up at the time and intervening."

As for Rocha, the Veterans Health Administration diagnosed him with post-traumatic stress disorder. When he heard there would not be a court-martial, he took it hard.

"It took a lot of courage to testify against Toussaint," Rocha said. "And then to be told that there was no need and there would be no trial!"

Rocha says he was devastated. He still can't quite describe the feeling.

"That kind of loss of gravity, of hitting the floor, of saying, 'What just happened?' That stuck with me," he says.

Shortly after hearing that news, Rocha made the hardest decision of his life. He ended his military career — out of fear that he'd face more abuse at a future deployment, and because he had come out as gay. Rocha's official statement read:

"I am homosexual. I am proud of my service and had hoped that I'd be able to serve the Navy and country for my entire career. However, I must be honest with myself, courageous in my beliefs and committed to my course of action."

On the basis of that statement, Rocha was officially discharged by the Navy.

Toussaint's second-in-command while he was in Bahrain was Petty Officer Jennifer Valdivia. Shortly after being told she would be removed from her position in the kennel because of the hazing investigation, she took her own life.

As for Toussaint, Youth Radio tried repeatedly to reach him by phone, through e-mail and via social networking sites. His command confirms it forwarded our questions to him. We wanted to know his side of the story. He has not responded.

Toussaint is now senior chief with what's regarded as the most prestigious dog unit in the Navy, the Naval Special Warfare Development Group, based in Dam Neck, Va.

But this may not be the end of the story.

Since Youth Radio began reporting this story, Rear Adm. David Mercer has ordered a review of the outcomes of the investigation into abuses at the Bahrain kennel. Mercer is in charge of naval installations in Europe, Africa and Southwest Asia.

"The incidents that occurred within the Military Working Dog Division at Naval Support Activity Bahrain do not reflect who we are as a Navy. They are considered an anomaly based on sailors who were improperly led."

On Tuesday, Youth Radio learned that yet another review of the investigation has been ordered, this time by the chief of naval operations, the Navy's highest-ranking officer and member of the Joint Chiefs of Staff. The deadline for that report is Oct. 6.

This story is the work of reporter Rachel Krantz of Youth Radio, a news organization based in Oakland, Calif., that teaches journalism to young people. Youth Radio broke the story on its Web site and its team worked with NPR staff to develop the story for National Public Radio.