Accessibility links
U.S. Shifts Tactics To Pursue Afghan Drug Traffickers Raids against major drug traffickers in Afghanistan are a revealing window into how U.S. commanders and the Obama administration are trying to cut off the Taliban's source of millions of dollars from the opium trade. It is a key part of the broader counterinsurgency effort. 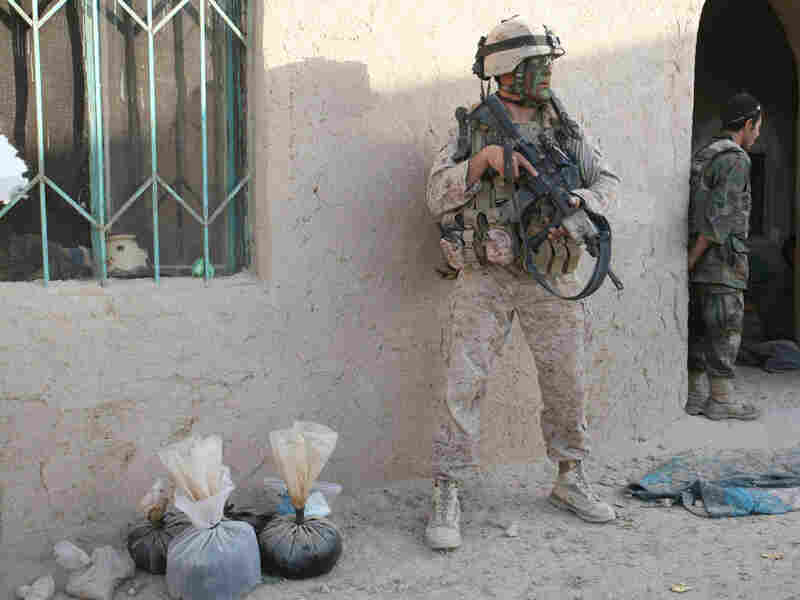 A Marine guards bags of opium seized during a raid at a compound in Dahaneh, Afghanistan, on Aug. 12. U.S. forces have shifted tactics from eradicating poppy crops to targeting drug traffickers. Alfred de Montesquiou/AP hide caption 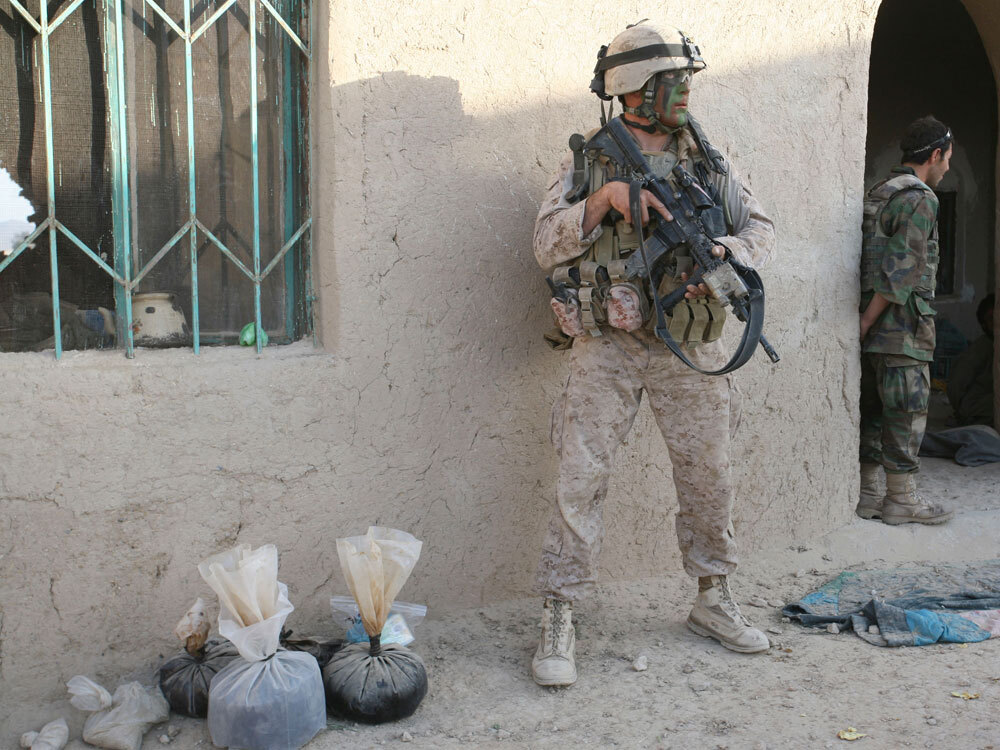 A Marine guards bags of opium seized during a raid at a compound in Dahaneh, Afghanistan, on Aug. 12. U.S. forces have shifted tactics from eradicating poppy crops to targeting drug traffickers.

When U.S. Special Forces soldiers conducted a series of raids last spring against major drug traffickers in Afghanistan's most violent province, they captured 39,000 pounds of raw opium and 300,000 pounds of poppy seed.

The operation in Helmand province also turned up stocks of weapons, ammunition, rockets and improvised explosive devices — a haul that reinforced just how closely tied the country's heroin traffickers have grown to Taliban insurgents. The Taliban stood to gain an estimated $4.3 million from the sale of the seized crop.

The Special Forces operation, dubbed Siege Engine, is described in an article by U.S. Army Capt. Michael Erwin in the CTC Sentinel, a publication of the Combating Terrorism Center at the U.S. Military Academy at West Point.

The raids are a revealing window into how U.S. commanders and the Obama administration are trying to cut off the Taliban's source of big money from the opium trade. It is a key part of the broader counterinsurgency effort.

Erwin describes how U.S. commanders decided to abandon a Bush administration-era tactic of eradicating opium crops, which was widely viewed as ineffective and counterproductive, in favor of a new strategy that directly targets the connections between the Taliban insurgents and drug traffickers.

In the short term, the U.S. raids have sparked even more insurgent attacks, making for a violent summer in Helmand province and prompting concerns of an even stronger backlash from the new tactics.

Cutting Off The Taliban's Drug Profits

The broader goal is to cut off a key funding source for the Taliban — the millions of dollars in revenue it receives from the Afghan drug traffickers who supply 90 percent of the world's heroin.

Perhaps the most significant change came in June when Obama administration officials said they would stop widespread crop eradication.

"Indeed, since aggressive poppy eradication began in 2006, narco-powerbrokers have worked much closer with the Taliban than ever before," writes Erwin, who was the senior intelligence officer for a U.S. Special Forces battalion that has been deployed to Afghanistan twice in the past three years. He returned from his latest deployment in July.

Erwin traces how U.S. and coalition eradication programs in Helmand produced a violent backlash by alienating local farmers, who turned to the Taliban to help protect their crops. They also had the unintended effect of forging strong alliances between traffickers and the Taliban.

Eradication was called "an expensive failure" in a report issued by the Senate Foreign Relations Committee in August. "Half the villages where the U.S. eradicated poppy in 2007 simply planted the crop again in the fall of 2008," the report noted.

Many analysts applaud the shift, but they caution that the new emphasis on traffickers could end up backfiring as well.

"I do see value in going after the Taliban-linked traffickers," says Vanda Felbab-Brown, an expert on illicit economies at the Brookings Institution. "But this needs to be calibrated carefully so that you don't provoke the exact opposite — tightening the bonds between the Taliban and the traffickers or provoking bloody turf wars."

Some Traffickers Tied To Karzai Government

In his recently leaked 66-page report on U.S. strategy in Afghanistan, Gen. Stanley McChrystal, the top U.S. commander in Afghanistan, said that the most insidious effect of the drug trade is how it promotes corruption inside the fledgling Afghan government.

But it has been much harder to go after key local officials or even aides to Afghan President Hamid Karzai with alleged ties to the drug trade.

"At some point, someone needs to start going after the government-linked traffickers, of which there are many," says Felbab-Brown. "Otherwise, the message you are sending is that the safest way to traffic is to be inside the Karzai government."

Starting this year, U.S. commanders stopped focusing on poppy farmers and began going after the traffickers themselves by targeting drug labs and convoys. In the first six months of the year, coalition forces destroyed 27 drug labs throughout Afghanistan, including 17 in Helmand alone.

Helmand province alone is responsible for growing more than half the world's opium. The U.S. military added roughly 50 major traffickers with Taliban ties to a list of targets that soldiers are authorized to "kill or capture."

"This implication of this decision means that insurgent and narcotics leaders can no longer use poppy eradication as a rallying cry to recruit more insurgents," Erwin writes. "Success has come at a price, however. Fueled by narco-powerbrokers' funds, insurgents have fought especially fierce in Helmand during the summer of 2009 against the Afghan government, [the Afghan army] and coalition forces."

The province has been a particular focus of U.S. military efforts this year to curb the Taliban insurgency, including a major operation launched this summer in the Helmand River valley by about 4,000 Marines in an offensive dubbed Operation Khanjar (Strike of the Sword).

Helmand turned into a particularly volatile hot spot in a summer that saw record numbers of U.S. troops being killed in Afghanistan.

It should come as no surprise that Taliban fighters and drug lords are violently defending their turf. Public estimates have suggested that the Taliban receives somewhere between 40 and 70 percent of its funding from the heroin trade.

In his article, Erwin concludes that "reducing the insurgency's rampant funding is an essential part of the equation" in restoring security in southern Afghanistan.

How Much Money At Stake?

Some U.S. officials caution, however, that the Taliban's reliance on drug money may be overstated.

U.S. intelligence agencies have recently revised their estimates on the Taliban's funding sources and downgraded the role of heroin. While U.N. estimates have suggested that insurgents collected some $400 million from the drug trade in 2008, the CIA and Defense Intelligence Agency put the Taliban's annual drug revenue at around $70 million, according to the Senate Foreign Relations Committee.

"The impact of poppy revenue on the funding streams of the Taliban is less than what many people have asserted," says one U.S. official. "It is smaller than the amount that comes in from foreign sources. It's money coming in from Arab states, from the Persian Gulf and from other places around the world where people see the Taliban as an effective proxy from keeping U.S. and Israeli interests in check."

The shift in U.S. tactics does appear to be having some effect on the drug trade. The most recent United Nations assessment of Afghanistan's opium crop found that opium cultivation in 2009 dropped 33 percent from the previous years.

The U.N. report credited the coalition's counternarcotics efforts, as well as a strong local governor's own anti-drug campaign, but it said that market factors might have played a larger role. Many farmers switched to wheat crops because the price of wheat has been rising, while opium has been falling.

U.S. and coalition officials also say that interdiction efforts alone won't be enough, adding that economic aid is needed to help farmers and other locals find alternative crops or jobs.

"We've learned there is no magic bullet," says a Western European diplomat. "But if you give people opportunities to make a living off these alternatives, you can make a gap."