President Obama gave his first-ever speech to the United Nations General Assembly today. Mr. Obama described a break from the recent past, when the U.S. was often criticized for acting alone. He said international cooperation is critical. He also issued a pointed challenge to the gathered heads of state to do their part to work with America.

NPR's Don Gonyea is in New York, and he sent us this report.

DON GONYEA: There's been a lot of buzz in New York this week as President Obama prepared for his first experience at the U.N. Crowds on street corners craned their necks when his motorcade passed. Foreign leaders angled for one-on-one meetings. Mr. Obama's election and his subsequent world travels have created a great deal of excitement internationally. The president acknowledged the subject at the very top of his speech today.

President BARACK OBAMA: I am well aware of the expectations that accompany my presidency around the world. And these expectations are not about me.

GONYEA: Rather, he said, it's about discontent with the status quo. It was an indirect reference to the tensions over the Iraq War and other policies of former President George W. Bush, who Mr. Obama did not mention specifically. He said there was a belief that on certain issues, the world saw America as acting unilaterally.

Pres. OBAMA: And this has fed an almost reflexive anti-Americanism, which too often has served as an excuse for collective inaction.

GONYEA: Mr. Obama made it clear things will be different under his leadership. As evidence, he ran through a list: his prohibition of torture, the plan to close Guantanamo Bay, withdrawing combat troops from Iraq in two years, and greater U.S. engagement with the U.N. He also included a line that seemed directed more to critics at home, even as he spoke to these world leaders.

Pres. OBAMA: And like all of you, my responsibility is to act in the interests of my nation and my people, and I will never apologize for defending those interests. But it is my deeply held belief that in the year 2009, more than at any point in human history, the interests of nations and peoples are shared.

GONYEA: The president spoke of a different kind of America, but he was also firm in stating that no nation should simply sit back, or use the U.N. as a forum to point fingers and stoke divisions.

Pres. OBAMA: Those who used to chastise America for acting alone in the world cannot now stand by and wait for America to solve the world's problems alone.

GONYEA: The president devoted a portion of the speech to the Middle East conflict, calling on Israel and the Palestinian Authority to start serious negotiations again. Using sharp language, he called on Palestinians to end incitement against Israel. And he said the U.S. does not accept the legitimacy of Israeli settlements.

Pres. OBAMA: Now, I am not naive. I know this will be difficult. But all of us, not just the Israelis and the Palestinians, but all of us must decide whether we are serious about peace, or whether we will only lend it lip service.

GONYEA: Mr. Obama said the world needs to work together to convince Iran and North Korea to forsake nuclear weapons programs. He closed by saying the world has reached a pivotal moment.

Pres. OBAMA: The United States stands ready to begin a new chapter of international cooperation, one that recognizes the rights and responsibilities of all nations. And so with confidence in our cause and with a commitment to our values, we call on all nations to join us in building the future that our people so richly deserve. Thank you very much, everyone. 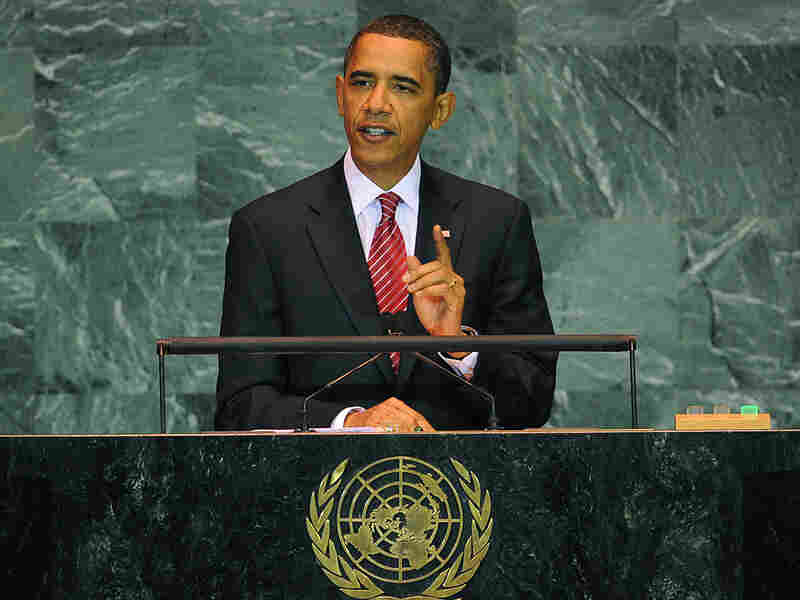 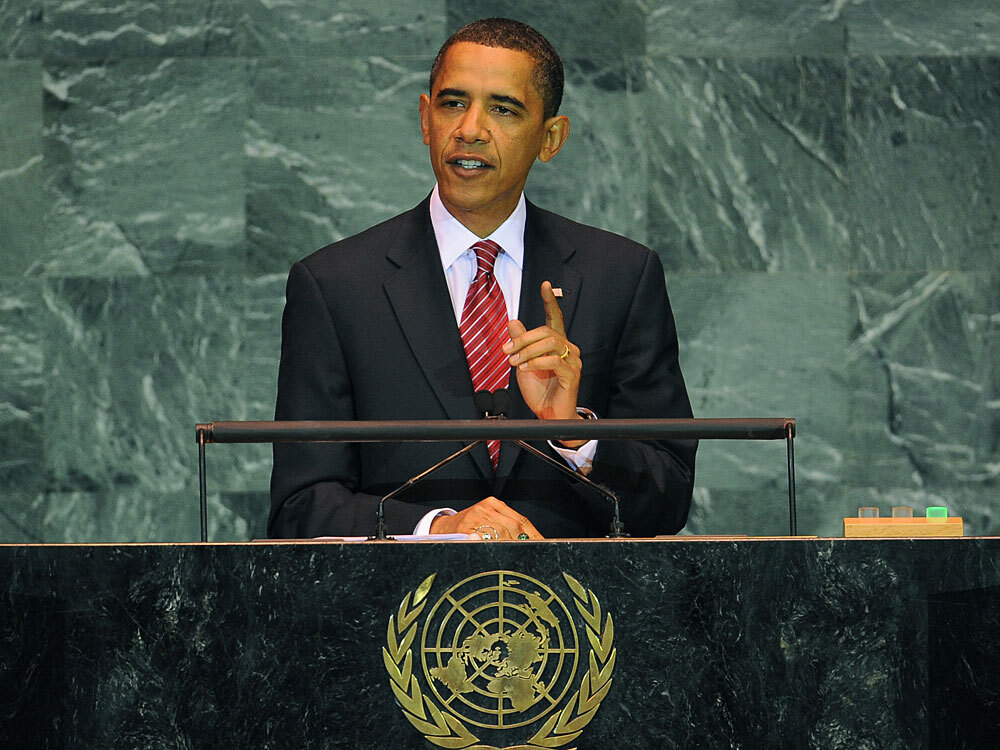 President Obama brought a fresh message of cooperation and issued a challenge to the world in his first speech Wednesday to the U.N. General Assembly, urging leaders to step up to their responsibility in solving global problems.

"If we are honest with ourselves, we need to admit that we are not living up to that responsibility," Obama said, looking out over a sea of leaders and representatives from most of the U.N.'s 192 member nations.

"The people of the world want change," Obama said. "They will not long tolerate those who are on the wrong side of history."

Obama called for a "new chapter of international cooperation" in a speech that focused on four key areas: nuclear nonproliferation, the promotion of peace and security, protecting the environment and improving the global economy.

He also used blunt language to address the stalled Mideast peace process and aimed criticism at both Iran and North Korea, the core of some of America's thorniest foreign-policy problems.

In a speech punctuated by polite applause, Obama stressed the differences between his foreign policy and that of his predecessor, George W. Bush.

"I took office at a time when many around the world had come to view America with skepticism and distrust," he said, adding "America has acted unilaterally, without regard for the interests of others."

The changes Obama listed included his prohibition on the use of torture and his order to close the military prison at Guantanamo Bay. But he also stressed the U.S. determination to combat extremism and a goal "to work with all members of this body to disrupt, dismantle, and defeat al-Qaida and its extremist allies."

Obama seemed to be addressing the anticipated defiance of some of the speakers scheduled to follow him to the podium — including Libyan leader Moammar Gadhafi and Iranian President Mahmoud Ahmadinejad — when he said "this body has often become a forum for sowing discord instead of forging common ground."

Promoting nuclear nonproliferation and disarmament, Obama noted that the U.S. is pursuing a new agreement with Russia "to substantially reduce our strategic warheads and launchers," and he promised to move forward with ratification of the Test Ban Treaty.

Obama focused on the Israeli-Palestinian conflict and called for new peace negotiations "without preconditions. " He said his meeting Tuesday in New York with Prime Minister Benjamin Netanyahu and Palestinian Authority President Mahmoud Abbas was "constructive but more progress is needed."

Obama drew applause when he said "we continue to call on Palestinians to end incitement against Israel, and we continue to emphasize that America does not accept the legitimacy of continued Israeli settlements."

Speaking bluntly, the president said "the United States does Israel no favors when we fail to couple an unwavering commitment to its security with an insistence that Israel respect the legitimate claims and rights of the Palestinians. And nations within this body do the Palestinians no favors when they choose vitriolic attacks over a constructive willingness to recognize Israel's legitimacy, and its right to exist in peace and security."

On climate change, Obama said "the days when America dragged its feet on this issue are over." He pledged that the United states would invest in clean energy and cut emissions of greenhouse gases.

"Wealthy nations that did so much to damage the environment in the 20th century" have an obligation to lead, Obama said. But he called on "the fast-growing carbon emitters" to do more to reduce their air pollution without inhibiting growth.

His remarks appeared to be aimed at countries such as China, which overtook the U.S. this year as the world's biggest emitter of so-called greenhouse gases. Chinese Premier Hu Jintao drew criticism Tuesday for a climate change speech in which he committed only that China would reduce carbon dioxide emissions by "a notable margin."

Obama also called on nations to work together to recover from the global recession. He promised that the U.S. will join with other nations at the upcoming Group of 20 nations summit in Pittsburgh to strengthen regulation of financial centers and get the world economy on track for balanced and sustained growth.

He promised to do more to tackle world heath problems, from HIV/AIDS to tuberculosis and malaria, and he called on wealthy nations to help poor ones by opening their markets to more trade.

In what seemed to be a final reflection on Bush-era policies, the president remarked on nation-building of the kind the U.S. has attempted in Iraq and Afghanistan.

"Democracy cannot be imposed on any nation from the outside," he said. "Each society must search for its own path, and no path is perfect. Each country will pursue a path rooted in the culture of its people, and in the past America has too often been selective in its promotion of democracy. But that does not weaken our commitment; it only reinforces it."

Some analysts said leaders at the U.N. were eager to hear a new tone from Obama.

"I think they [the General Assembly] were looking for exactly what he delivered," says Bruce Jones, director of the Center for International Cooperation at New York University. "They were looking for the president to show that the United States is willing to wield its power with and through the U.N. and in cooperation with other nations."

The president's next major appearance at the U.N. will come Thursday, when he chairs a special session of the U.N. Security Council on the issues of nonproliferation. He then departs New York for Pittsburgh to host the G-20 summit Thursday evening and Friday.