Accessibility links
Boehner: Slow Down Health Overhaul Negotiations Republicans argue that President Obama hasn't done enough to forge a bipartisan solution. House Minority Leader John Boehner says there is common ground on the legislation but the president needs to hit the "reset button" on the negotiations. 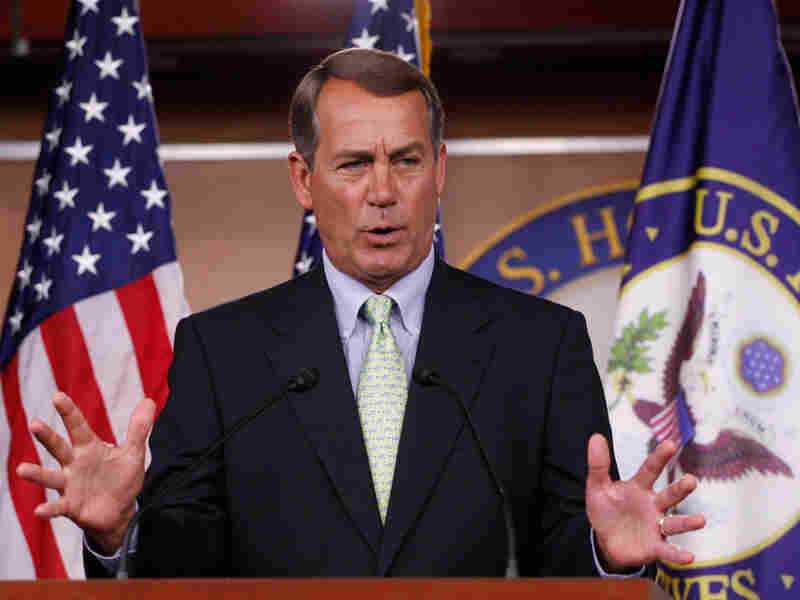 As President Obama continues to navigate the bumpy landscape of health care overhaul, many Republicans are arguing that he hasn't done enough to forge a bipartisan solution. Those words were echoed Thursday by Rep. John Boehner (R-OH). The House minority leader told NPR's Linda Wertheimer that common ground exists between the two parties, but the president has not reached out to the Republican leadership

"I sent [the] president a letter back in May outlining some of the things we'd like to do in health care and asking for a meeting. And I got a nice, polite letter back that said basically, 'Thank you. We'll see you at the end of the process,' " Boehner said.

Boehner said the Republican leadership is onboard with several elements of proposed legislation, such as providing affordable health insurance to those with pre-existing conditions, and the creation of a safety net for the newly unemployed. "We believe that if you lose your job, you shouldn't have to be worried about losing your health insurance and should be able to take your health insurance from job to job."

But he said it's a mistake for the president to continue on the current path.

"I just think it's time for the president to hit the reset button. Let's just stop all of this. Let's sit down in a bipartisan way and find a way to agree on those things that will make the current system work better."

There are a number of common-sense reforms that can be implemented to improve the current system, he told Wertheimer. But simply throwing the system out, he argued, makes no sense.

Boehner also touched on the challenges facing U.S. forces in Afghanistan — and the growing discord in Washington over how to proceed. He said President Obama laid out a clear strategy earlier this spring to prevent al-Qaida and the Taliban from re-establishing safe havens in the country. But he says the president now appears to be reconsidering that tack. That, Boehner said, is concerning.

"If Gen. [Stanley] McChrystal believes that without timely reinforcements our efforts may end in failure, then we must act quickly to give him the resources he needs to achieve our goals."

At this particular stage, Boehner said, timing is critical.

"My concern is that the longer we wait, the more jeopardy exists for the troops that we have there. Even if there is a decision to send more troops, it's going to take a substantial amount of time for those troops to be trained and deploy."