Accessibility links
At G-20, U.S. Eyes Economic Imbalances The Obama administration hopes to discuss growing trade imbalances at the summit of the Group of 20 economic powers in Pittsburgh Thursday and Friday. The meeting is to discuss the global economy, which is slowly recovering from the worst recession since the Great Depression.

The Obama administration hopes to discuss growing trade imbalances at the summit of the Group of 20 economic powers in Pittsburgh Thursday and Friday. The meeting is to discuss the global economy, which is slowly recovering from the worst recession since the Great Depression.

Earlier today, before protests erupted, we spoke with NPR economics correspondent John Ydstie and White House correspondent Scott Horsley about the focus of the summit. This is the third time the G-20 has come together since the economic crisis went global a year ago. With the economic picture slowly improving, this summit is about making sure a crisis like this never happens again. For the Obama administration, the key issue is doing something to address the big imbalances in the world economy, basically, the huge trade deficits the U.S. runs with China and other countries.

I began our conversation with Scott Horsley and asked him to go through the main issues on the summit agenda.

SCOTT HORSLEY: Because the economic situation has improved, the discussion is not so much about jumpstarting a disabled car, but just maybe putting in some safety belts so that you head off future crises or at least make them less painful. They're talking about bank regulation, capital requirements, maybe restricting bankers' pay, and, as you say, the imbalances where the U.S. doesn't save enough and spends too much and other countries do the opposite. The U.S. is saying our consumers can no longer be the only thing keeping global cash registers ringing. Other countries need to depend more on their own domestic markets.

BRAND: And I guess you're speaking mainly of China there, Scott. And John, China, I assume, views the problem differently in terms of trade imbalances and what caused the global financial crisis.

JOHN YDSTIE: That's absolutely right. The Chinese don't agree that their big trade surpluses and the excess profits that they made and then recycled in the United States was a big contributor to the crisis. They blame unregulated risk-taking in the United States. That said, their trade surplus is going down and they boosted domestic consumption for their people. But that's partly a product of this crisis. That said, they'd like to keep doing it because they are interested in the well-being of their people. What the Chinese don't want is to be held to any specific goals or timetables to get their economy in balance. They want to have the option of boosting exports to create growth if they have to.

And Germany feels the same way. Germany is the world's biggest exporter - you may be surprised to know that - and it is not ready to agree to these targets for cutting its export surplus for the same political reasons as China. They want to be able to create growth in their country.

HORSLEY: And, in fact, German Chancellor Angela Merkel has been one of the most outspoken proponents of bank regulation. And she said very explicitly she doesn't want to see that issue shoved to the back burner by a focus on this global imbalance issue.

BRAND: And John, how tense is it between the U.S. and China in terms of trade, and how is that going to affect the discussions?

YDSTIE: Well, of course, there is trade tension between the two countries. The U.S., last week, put a big tariff on tires imported from China, because the U.S. said there was a spike in imports. And now, the unions want to put extra tariffs on some specialized paper products that have been coming into the United States from China in very large amounts. I think the president and Chinese leader Hu Jintao had a conversation about this in New York at the U.N. General Assembly. I don't think it's going to come up around the table here at the summit.

HORSLEY: I think that's right. The Obama administration has really tried to downplay any dispute over the tire tariffs. The president has said he's confident he can avoid having this turn into a broader trade war. But, you know, trade has been a balancing act for President Obama ever since the primary with other Democrats last year. A lot of Americans are skeptical of free trade, they're supportive of tariffs, and President Obama has to keep at least one eye on public opinion here at home. And, you know, that's true of most, if not all the G-20 leaders here. And because those domestic audiences all have their own concerns, that's why it can be so challenging to reach a consensus especially when you don't have the economic crisis gun pointed at your head.

BRAND: That's White House correspondent Scott Horsley along with NPR economic correspondent John Ydstie, both covering the G-20 Summit in Pittsburgh. Thank you both very much. 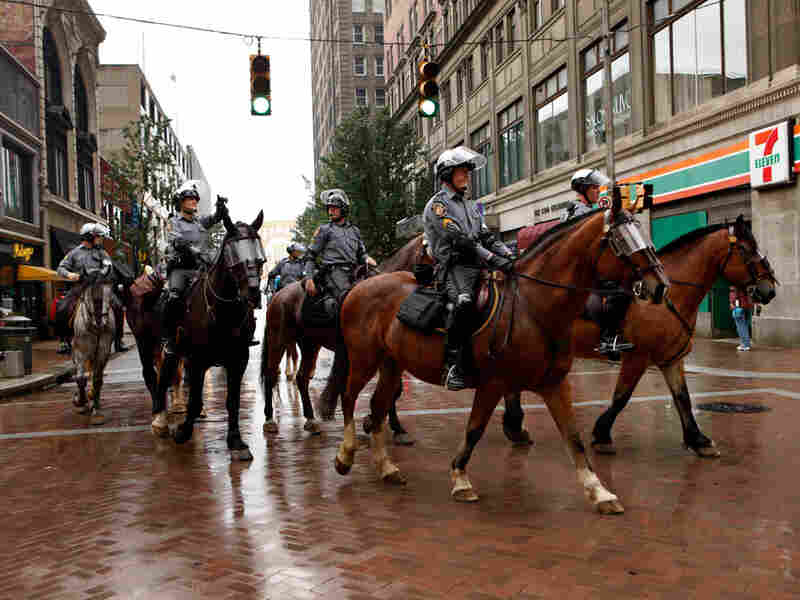 Mounted police patrol the streets of downtown in preparation for the G-20 Summit in Pittsburgh, Pa. Gerald Herbert/AP hide caption 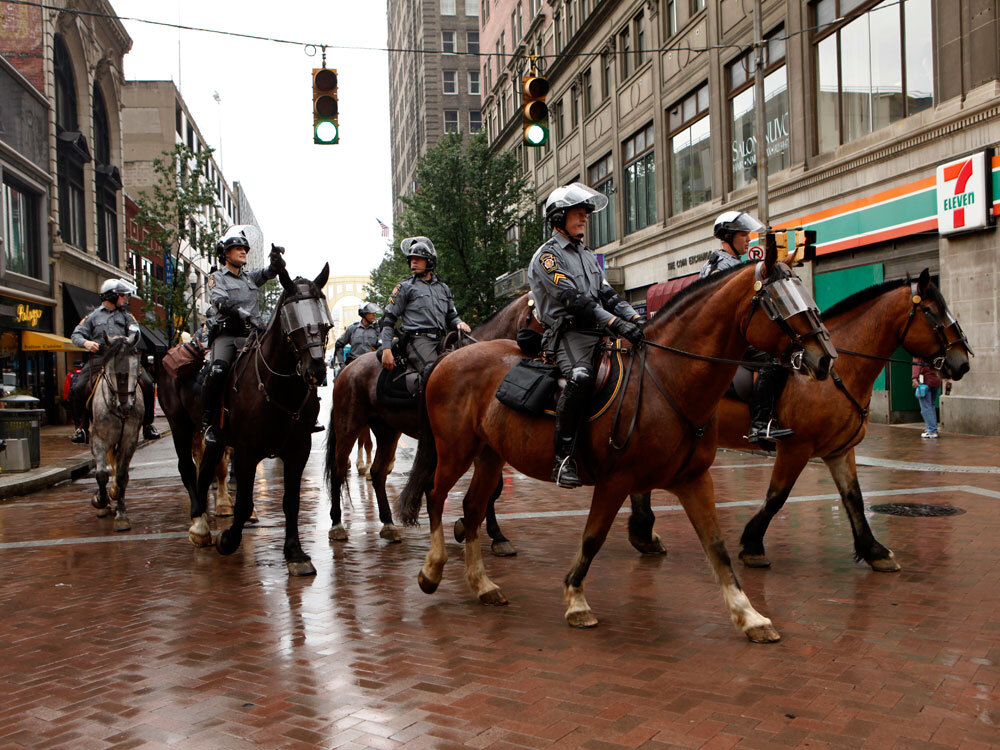 Mounted police patrol the streets of downtown in preparation for the G-20 Summit in Pittsburgh, Pa.

President Obama joins leaders of industrialized and developing economies Thursday at the G-20 summit in Pittsburgh, hoping to convince them to transform the global economic crisis into an opportunity to permanently stabilize banks and financial markets.

The president is expected to tell fellow leaders that the old economic model of massive Chinese exports being snatched up by borrow-and-spend consumers in America and elsewhere is unsustainable. In a preview of that message at the United Nations on Wednesday, Obama said, "Now is the time for all of us to take our share of responsibility for a global response to global challenges."

NPR Correspondents Report On The Summit

The leaders of the Group of 20 nations are meeting for the third time since the financial crisis threw growth into reverse a year ago. When the body last met in April, many economies, including the United States, were under severe strain, and world leaders largely agreed on common remedies such as dramatically increased government spending to provide some stimulus.

With the crisis calming, summit leaders are set to discuss how to redirect their focus on reinvigorating their economies without repeating past mistakes.

Obama will propose a gradual elimination of extensive government subsidies that encourage the use of fossil fuels that contribute to global warming, White House officials say. Many countries, including the U.S., provide tax breaks and direct payments to help produce and use oil, coal, natural gas and other fuels that emit carbon dioxide, a gas that traps heat in the atmosphere.

China and India, both rapidly industrializing, energy-hungry economies, are likely to be obstacles in the president's plan.

The issue of capping pay for bankers and financial executives is also likely to be addressed, but there is little expectation of any solid movement. French President Nicolas Sarkozy has proposed capping compensation for bankers.

"Fortunately, President Obama and his advisers are on record opposing that, and rightly so," Price says. "So, as I say, the final risk is the possibility ... that something kind of hijacks the attention and becomes a distraction from the important work of reform."

The G-20 leaders will likely endorse a set of compensation guidelines, without caps. They will also likely address the issue of requiring banks to hold more capital, which would cushion against losses so banks remain solvent when things go bad.

European leaders are pressing for a deal on financial regulation reforms, but Obama's agenda is pressing for policies to even out the trade imbalances between China and the United States.

British Prime Minister Gordon Brown told reporters in New York on Thursday that Britain and the U.S. "would like to see China importing more from our countries."

Japan's new prime minister, Yukio Hatoyama, said his nation wants to be part of the discussion to "rein in the issues of poverty and economic disparity, which are difficult to coordinate by simply leaving them to market mechanisms."

Obama and first lady Michelle Obama will greet their guests at a "working dinner" Thursday at Pittsburgh's Phipps Conservatory and Botanical Gardens. Friday will feature group sessions on various topics, and a presidential news conference.