Accessibility links
Swinging Chicken Ritual Divides Orthodox Jews In the days before Yom Kippur, which begins on Sunday evening, many Orthodox Jews in Brooklyn, N.Y., will wave chickens over their heads and say the prayer of Kapparot (or Kapparos, depending on heritage). But the more than 1,000-year-old atonement ritual has concerned some in the community, who worry about animal cruelty. 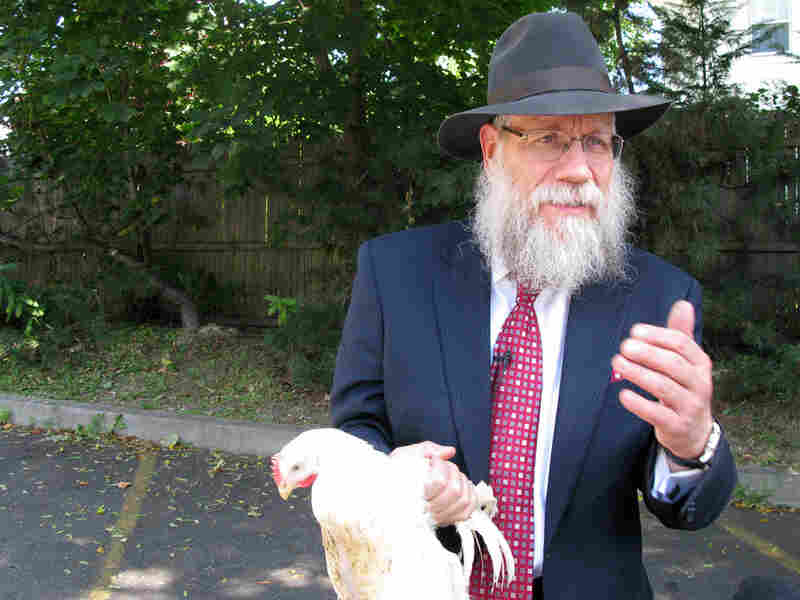 Rabbi Shea Hecht in Brooklyn, N.Y., demonstrates how Orthodox Jews wave a chicken three times over their heads and say the prayer of Kapparot (or Kapparos, depending on heritage) in the days leading up to Yom Kippur. Dianna Douglas hide caption 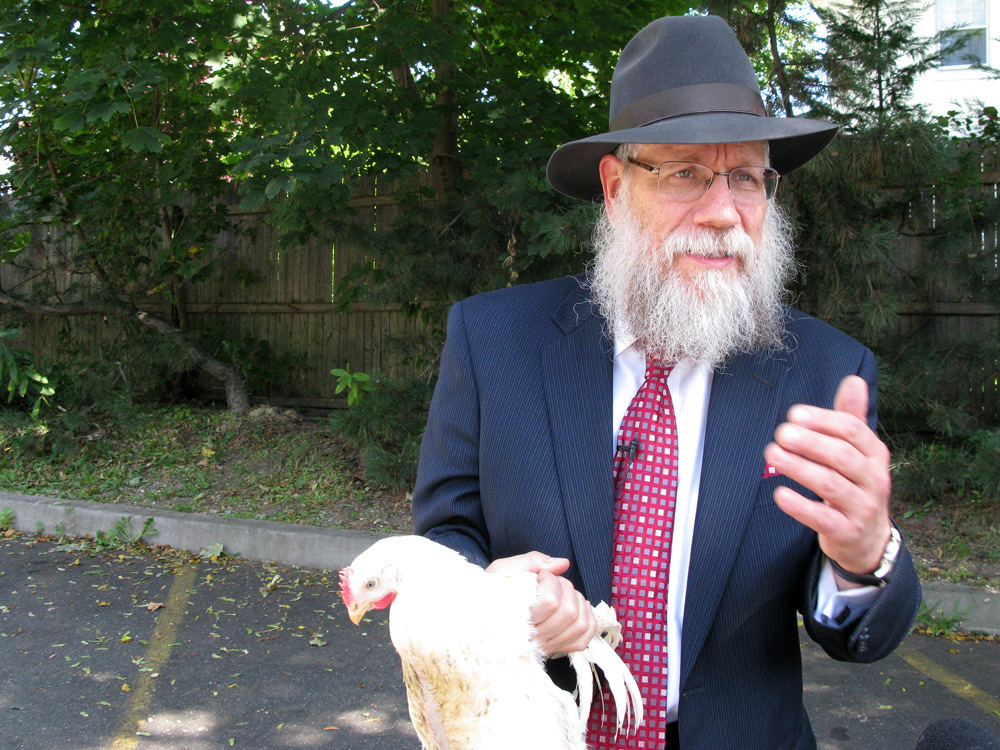 Rabbi Shea Hecht in Brooklyn, N.Y., demonstrates how Orthodox Jews wave a chicken three times over their heads and say the prayer of Kapparot (or Kapparos, depending on heritage) in the days leading up to Yom Kippur.

Rabbi Shea Hecht plucks a chicken off a truck parked behind a synagogue in Queens, N.Y., and demonstrates how to swing a chicken.

"You take it by the wing," says the white-haired Hecht, careful not to get the chicken's feathers or anything else on his black suit and tall black hat. "You put one wing over the other wing. See? It's very relaxed. And you swing it very softly over your head like this."

Hecht holds the bird, waves it three times above his head, and says the prayer of Kapparot (or Kapparos, depending on heritage). He prays that his sins will be transferred to the bird and he will escape the divine punishment that he deserves. The prayer is more than 1,000 years old, and countless Orthodox Jews will recite it in the days before Yom Kippur, the Jewish day of atonement, which begins at sundown Sunday. Hecht says waving the chicken isn't the point of this ritual.

"The main part of the service," he says, "is handing the chicken to the slaughterer and watching the chicken being slaughtered. Because that is where you have an emotional moment, where you say, 'Oops, you know what? That could have been me.' "

But David Rosenfeld, who is also an Orthodox Jew, has a different message.

"Kapparos!" he calls out to passersby. "Use money, not chickens."

It is a kind of double world for me because I love all these people I'm with and I'm part of their world. I wear a yarmulke; I'm with them; they're wonderful people. But I disagree with them on this point.

Rosenfeld and his friend Sam Schloss have set up a table next to a kosher bakery in Brooklyn. They have pamphlets and a cage of fake chickens — which causes some confusion.

"How much for chickens this year?" a woman asks, thinking they're selling chickens for Kapparot.

"No, we want people to use money," Rosenfeld says, explaining that waving money around her head is just as religiously acceptable as waving a bird. "We think it's very cruel to the chickens. We're trying to get people to not buy the chickens at all but use money instead."

She nods and says she'll use money this year.

It's not easy undoing a millennium of tradition, one chicken at a time. And it's lonely. Rosenfeld knows he's at odds with his friends at synagogue.

"It is a kind of double world for me because I love all these people I'm with and I'm part of their world," he says. "I wear a yarmulke; I'm with them; they're wonderful people. But I disagree with them on this point."

And so each year he and Schloss — who is also Orthodox — search out Kapparot sites in Brooklyn.

On Monday, NPR went on the search with Schloss.

"Yup, there's a sign right there," he says, pointing to a small blue and white poster with a chicken on it.

For years, Schloss has been covering up these posters with his own that show filthy and starving chickens in crates. One year, Schloss found a garage full of chickens that had been abandoned after Yom Kippur.

"They were emaciated chickens mixed in with dead chickens," he recalls. "There was no food, there was no water — it was hot during the day, cold at night. There was rain. It was just a torturous thing for these animals to go through."

The police arrested the organizer for animal cruelty. And the city has fined others for leaving public places looking like a slaughterhouse, with blood and dead chickens all over the site.

Grab It By Two Wings

At a small operation in Boro Park, there are maybe 100 chickens. The man running the site eases a bird from its crate and hands it to a customer. She waves it three times over her head. The operator says he trucks in these chickens for the week, and makes a small profit. He's clearly nervous. He won't give his name — and he complains the sacred ritual has been unfairly tainted by a few rotten apples.

He says if you grab it by one wing, the wing could break. That would cause the chicken pain and it would no longer be kosher. He shows NPR a bag of bread, soaked in water, which he gives to the chickens so they don't get hungry or thirsty.

"This is probably the best one I've seen," Schloss says. "I mean it's not the best thing for the chickens, and you can hear that in their voices. But it's as good as I think we're going to get."

Schloss hopes his efforts and the bad publicity have forced changes like these. But he doubts the practice will ever be outlawed.

And that's just as it should be, says Hecht.

"What I've told my local police department and my local government is, 'I'm an American. We have freedom of religion.' "

That may be why anti-cruelty groups like the ASPCA declined to talk for this story. Instead, it issued a statement saying that it opposes any practice in which animals are made to suffer in the name of religious beliefs or tradition.

A Division Among Orthodox Jews

But for many Orthodox Jews, the problem with Kapparot is not about animal rights or even the law. It's about religious interpretation, and this is dividing Orthodox rabbis themselves.

"We value Jewish tradition enormously, except when it collides with the fundamental principles of our Torah," says Brooklyn Rabbi Shlomo Segal.

"The Torah prohibits Jews from causing any unnecessary pain to living creatures, even psychological pain. It says in the Book of Proverbs, 'The righteous person considers the soul of his or her animal.' "

Segal is among the Orthodox rabbis urging believers to use money instead of live animals. But that makes for thin spiritual experience, counters Hecht. He says there's something visceral, and sacred, about holding a live animal in your hands just before it dies for your sins.

"I know and I can speak for myself and my family members, and thousands of people in my community, who say that this Kapparot service has moved them and has given them a realization that, 'Hey, I have to make changes. I have to improve myself. ' "

And Hecht is ready to help them. Come Saturday, the sidewalk in front of his yeshiva will be packed with believers. It will be loud; it will be bloody. And 4,000 chickens will pay the price of atonement.