Accessibility links
U.S. Troops Withdraw From Isolated Afghan Areas The U.S. military is starting to pull its troops from some of Afghanistan's more remote areas and shift them to more populous towns and cities to better separate the Taliban from the Afghan population. But there are concerns that the insurgents could capitalize on the move. 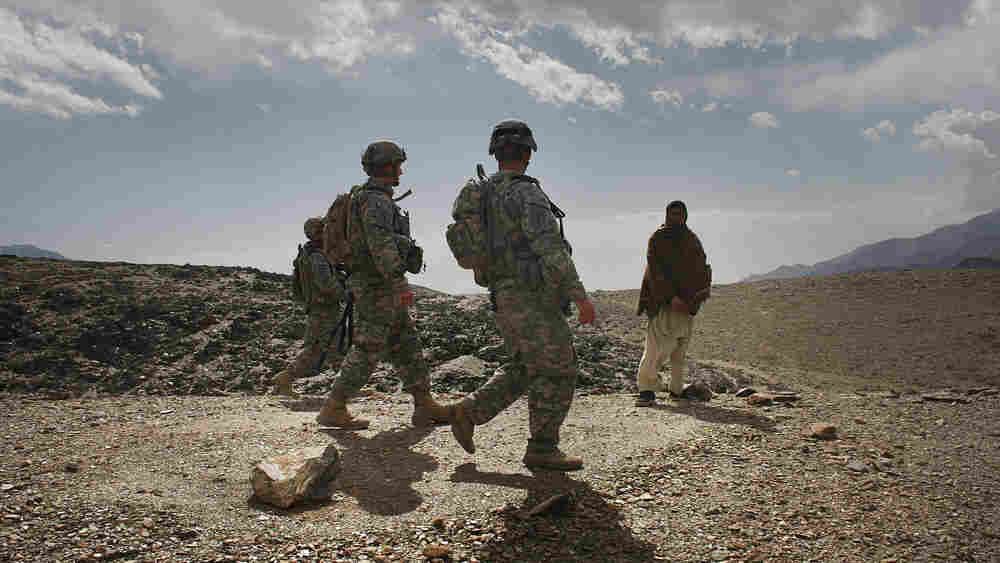 U.S. soldiers walk through the mountains on patrol in Afghanistan's northeastern Nuristan province in February. The U.S. military is beginning to pull troops out of remote areas such as Nuristan and move them to more populated areas. Spencer Platt/Getty Images hide caption 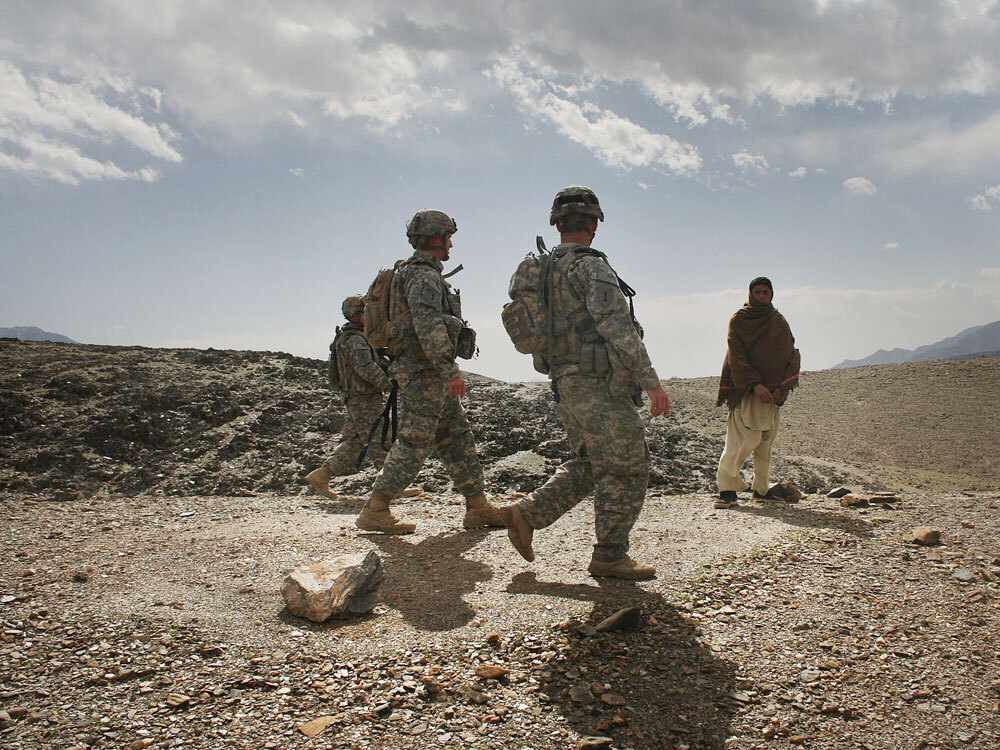 U.S. soldiers walk through the mountains on patrol in Afghanistan's northeastern Nuristan province in February. The U.S. military is beginning to pull troops out of remote areas such as Nuristan and move them to more populated areas.

The U.S. military is starting to pull its troops from some of the more remote areas of Afghanistan. The decision is part of a counterinsurgency strategy by Gen. Stanley McChrystal, the top military commander in Afghanistan, but there are concerns that the Taliban could capitalize on the move.

The U.S. military prefers to call McChrystal's decision to move troops from some of the more remote parts of Afghanistan a "repositioning" of forces. Col. Wayne Shanks, a spokesman for coalition forces in Afghanistan, says McChrystal's strategy places a premium on protecting the population, especially in towns and cities where the Taliban has made inroads.

"Gen. McChrystal has been discussing with his commanders how better to protect the population, not just necessarily hold pieces of land," says Shanks. "We're more concerned with repositioning forces across the country in order to better isolate the insurgents from the population."

Retired Army Gen. Dan McNeill says McChrystal's decision is sound because there are not enough troops to cover all the areas. McNeill, who was the NATO commander in Afghanistan until last year, says there is a calculus the U.S. military uses to determine the size of a force that is needed to secure the population in a place like Afghanistan.

"If you apply that calculus, I think the number comes out to be on the high side of 480,000," McNeill says, adding that figure is a combination of indigenous security forces and international forces.

Currently, there are more than 60,000 U.S. troops and about 35,000 troops serving in NATO's International Security Assistance Force in Afghanistan. That means McChrystal needs to maximize the impact of the number he has, pulling them out of areas where progress has been slow or troops have been bogged down in a stubborn battle with insurgents in isolated areas.

One of those areas is Nuristan, in Afghanistan's northeast. James Fussell, a retired Army major, has spent several years in the Nuristan area and co-authored a report on the region for the Institute for the Study of War. Fussell says Nuristan has rarely been controlled by any Afghan government.

"It's a very, very rugged terrain. You have elevations above 10,000 feet. You have very sparsely populated remote valley regions," he says. "In some of those valleys, the inhabitants ... speak a separate language from the rest of their neighbors."

Fussell says there are no paved road networks in many parts of Nuristan. The U.S. military has built roads in some of the neighboring provinces, but faced resistance in Nuristan, where many communities want to remain isolated as part of a defense strategy: They don't want strangers coming into their area.

Foreign troops probably could have stayed out of the area altogether except that Nuristan shares a porous border with Pakistan — and there is a vast trail network heavily used by insurgents.

"There have been cases where small elements of U.S. forces — platoon-size, company-size elements — have almost been overrun and would have been overrun if not for the reliance on artillery fire and close air support," Fussell says.

American military officials say they will continue to keep an eye on the areas they are leaving and will take corrective action if needed.

Still, some see the withdrawal of troops from areas such as Nuristan as a retreat. Nate Fick, a former Marine Corps officer who served in Afghanistan, says perception matters.

"There's a war for a narrative here that's incredibly important," he says.

Fick, now the chief executive officer at the Center for a New American Security, says al-Qaida created a myth that it single-handedly pushed the Russians out of Afghanistan in the 1980s, and may use the same tactic to capitalize on the U.S. pullback from Nuristan and other areas.

"The jihadists have used that narrative as a rhetorical victory, as a recruiting tool to strengthen their own story, and they're going to try to do that again," he says.

Fick says he does not believe the pullout of troops is a retreat. He describes it as a triage situation where the U.S. is choosing the least bad option.