Accessibility links
Officials To Audit Sampling Of Suspect Afghan Ballots Five weeks after Afghanistan's presidential elections, it's still unclear who will lead the country. Afghan and international officials are now hoping to break the logjam by agreeing to review ballots at about 10 percent of the nearly 3,100 polling stations flagged as suspicious by a U.N.-backed watchdog. 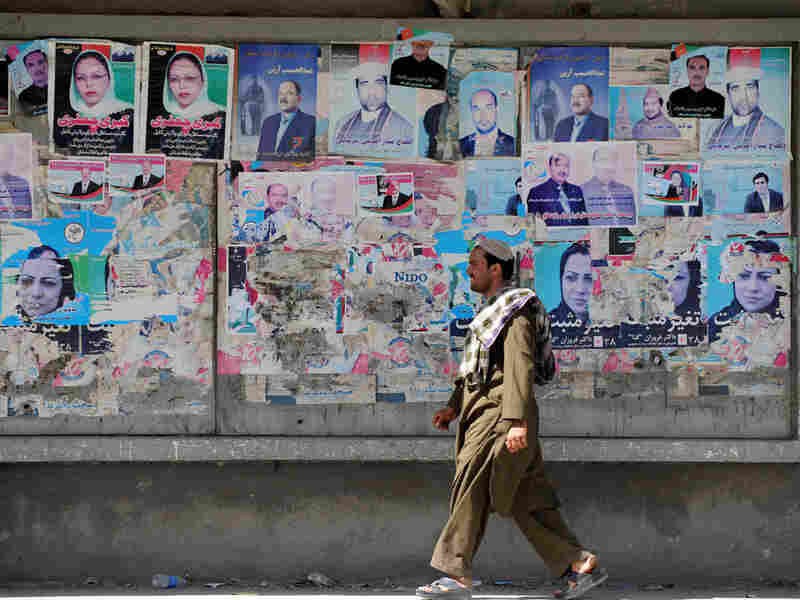 An Afghan pedestrian walks in front of a wall of torn posters of presidential and provincial candidates in Kabul on Thursday. Five weeks after Afghanistan's presidential election, it's still unclear who will lead the country. Romeo Gacad/AFP/Getty Images hide caption 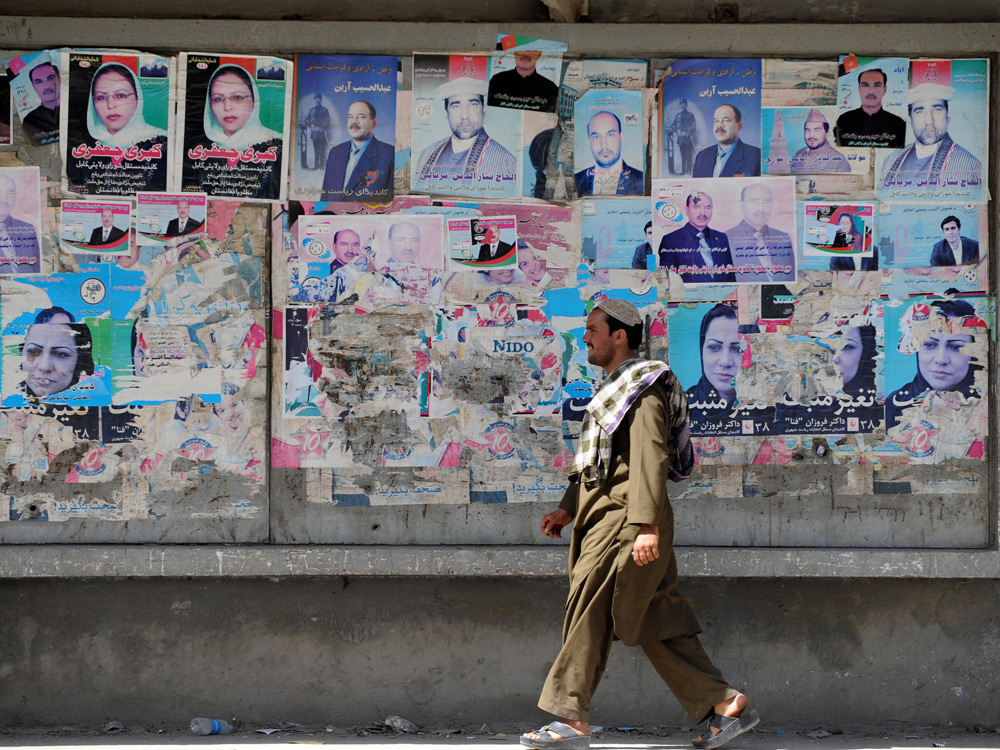 An Afghan pedestrian walks in front of a wall of torn posters of presidential and provincial candidates in Kabul on Thursday. Five weeks after Afghanistan's presidential election, it's still unclear who will lead the country.

Five weeks after Afghanistan's presidential elections, it's still unclear who will lead the country.

A preliminary tally suggests that incumbent Hamid Karzai is the winner, with 54 percent of the vote. But widespread allegations of fraud and official calls for a recount have stalled the final outcome.

Afghan and international officials are now hoping to break the logjam by agreeing to review ballots at about 10 percent of the nearly 3,100 polling stations flagged as suspicious by a U.N.-backed watchdog.

Election officials will audit 313 polling stations to help determine which votes from the controversial election should be cast out. People who attended a closed-door meeting at the main United Nations compound Thursday say the polling stations where ballots will be reviewed are being kept secret for now to prevent tampering.

The stations selected for audit are where a single candidate received 95 percent or more of the votes cast, or where a suspiciously large number of ballots were cast, or both. The idea behind this "sampling" of suspect votes is to allow for a speedier announcement of final results.

The audit might begin as early as next week, although officials say questions of who will be allowed to observe the process and where the reviews will take place are still being worked out.

Canadian Grant Kippen, who heads the U.N.-backed Electoral Complaints Commission, hopes the random audit of the ballots will resolve the matter.

"So the exact timeline is not known, but I think it's going to be a more efficient way of doing this audit and recount than if we went to look at every single one of the boxes," he says.

Saving time is crucial. Winter in this mountainous country is only a few weeks way, after which many roads will become impassable. That will make it impossible to hold a runoff election should enough votes be invalidated to require one.

The uncertainty is already paralyzing the Afghan government, which is seen by a growing number of people here as ruling without a legal mandate.

Waheed Omar, Karzai's campaign spokesman, says he is cautiously optimistic about the planned audit. "It has been a long and painful wait for the people of Afghanistan, and it has to be over as soon as possible."

But like most other efforts by Afghan and international election officials here, the upcoming audit is generating nervousness and suspicion.

"What they've announced recently about the sampling, it is extremely unclear what they are talking about," said former Foreign Minister Abdullah Abdullah, Karzai's chief election rival. "We don't know. They say it has to be transparent, it has to be fair, but we don't know the details."

Abdullah says it would have been easier to simply cast out some 1.5 million questionable ballots.

But Omar says his side will object to any effort that significantly changes the already announced tally.

"If somebody decides at the end of the day that so and so number of votes are cut from President Karzai's votes and he goes below 50 percent, somebody has to explain it," he says.

Many Western and Afghan election observers here say such grousing is understandable. They argue allegations of fraud should have been dealt with more quickly and decisively by Afghan officials and the international community. But they also predict that the audit could restore some credibility to the election.

"Whoever the next president is," says Candace Rondeaux, senior analyst in Afghanistan for the International Crisis Group, "even if they are disappointed in who it is, will determine their ability to go around the corner and buy a carton of milk and to do so without having to pay a bribe to get through the police checkpoint."

Rondeaux adds: "This is what really concerns Afghans today, is their ability to get around securely, to live their lives, to send their children to school without fear of harassment, without fear they'll actually be bombed. And they expect their government to answer for this, and the fact there haven't been answers for the last eight years, it's really what's riveting everyone to the outcome."

The election controversy could have a bright side, adds Nader Nadery, who heads the Free and Fair Election Foundation of Afghanistan, which helped monitor last month's polls.

"If we end up with an acceptable result, I would say Afghanistan has taken — despite all of the issues — a positive step forward, because the debate in this process [has] helped [mature] both the politicians and the public," he said.