Accessibility links
Pasties: The Meaty Center Of 'Yooper' Food The meat turnovers were brought to Michigan's Upper Peninsula by immigrant miners from Cornwall, England. "Yoopers" — the local population — are very opinionated about them. A pasty isn't just a meal — it's a heritage. Here's the recipe, too. 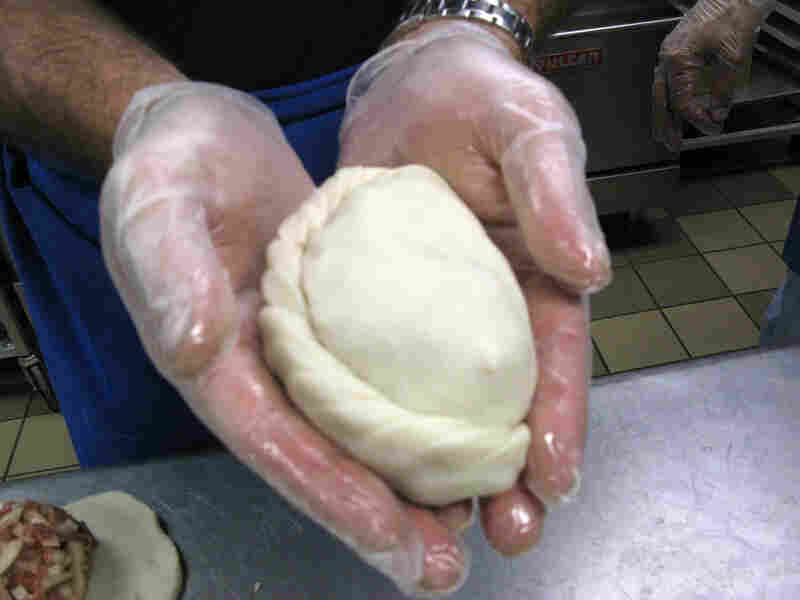 The assembled pasty, just before it goes into the oven. The small circle of pie crust is filled with meat, potatoes, onions and spices. Ned Wharton/NPR hide caption 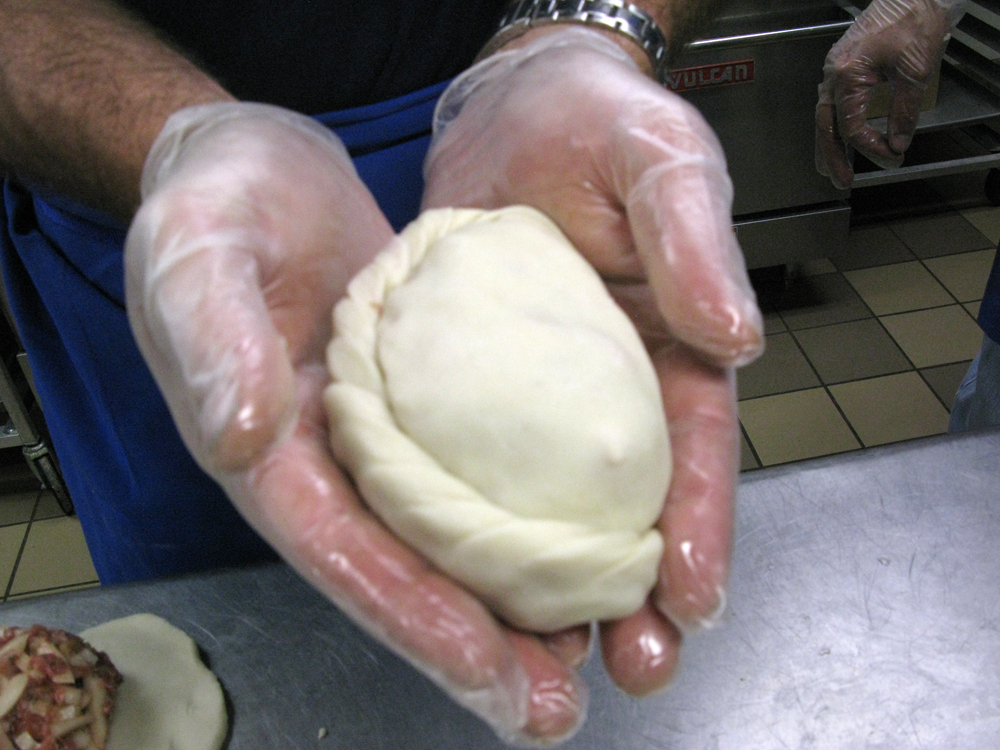 The assembled pasty, just before it goes into the oven. The small circle of pie crust is filled with meat, potatoes, onions and spices.

Get a Lawry's pasty recipe.

Miners have hearty appetites. They work hard during cold Michigan mornings. So, when the whistle blows for lunch, it's time for a pasty.

The meat turnover was brought to Michigan's Upper Peninsula by immigrant miners from Cornwall, England, and "Yoopers" — the local population — are very opinionated about them. A pasty is a small circle of pie crust filled with meat, potatoes, onions and spices. Some have carrots. The pasty at Lawry's Pasty Shop in Marquette — voted best by the local newspaper — has rutabaga.

Brothers Peter and Mike Lawry run the three-generation family business, which has been in the area since 1946. Their ancestors worked the local mines around the turn of the century.

Sometimes they would help their grandmother make pasties for the shop.

To demonstrate, the brothers mix meat, onions, potatoes and rutabaga in a tub. Peter shakes in spices. The mixture is scooped — or "gobbed" — into the dough. Mike folds the crust over the stuffing, then shows off his special technique to seal the pasty up.

"When I'm teaching people, I like to say it's kind of like a wave," he says. "You roll the top over the bottom — it's like a wave rolling in on shore." The braid-like crust is the part that people like to break off and dip into ketchup, Mike says.

Not too long after the pasties are pushed into the oven, a wondrous smell of onion, beef and pie crust fills the room. "It's wonderful in the morning when you're hungry," Peter says. "When you go home in the afternoon and your wife says, 'Oh, ya smell like a pasty again,' it's a little different."

"Sometimes it's funny," Mike adds, "when you go to the bank with our deposits in the morning, the ladies in there will tell us that our money smells like pasties and it makes them hungry." 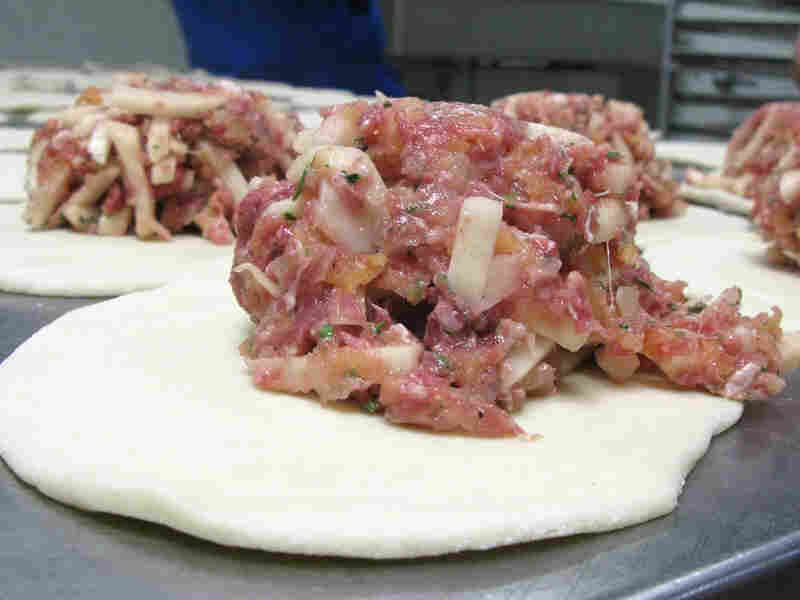 Scooping, or "gobbing," the filling onto the crust. NPR hide caption 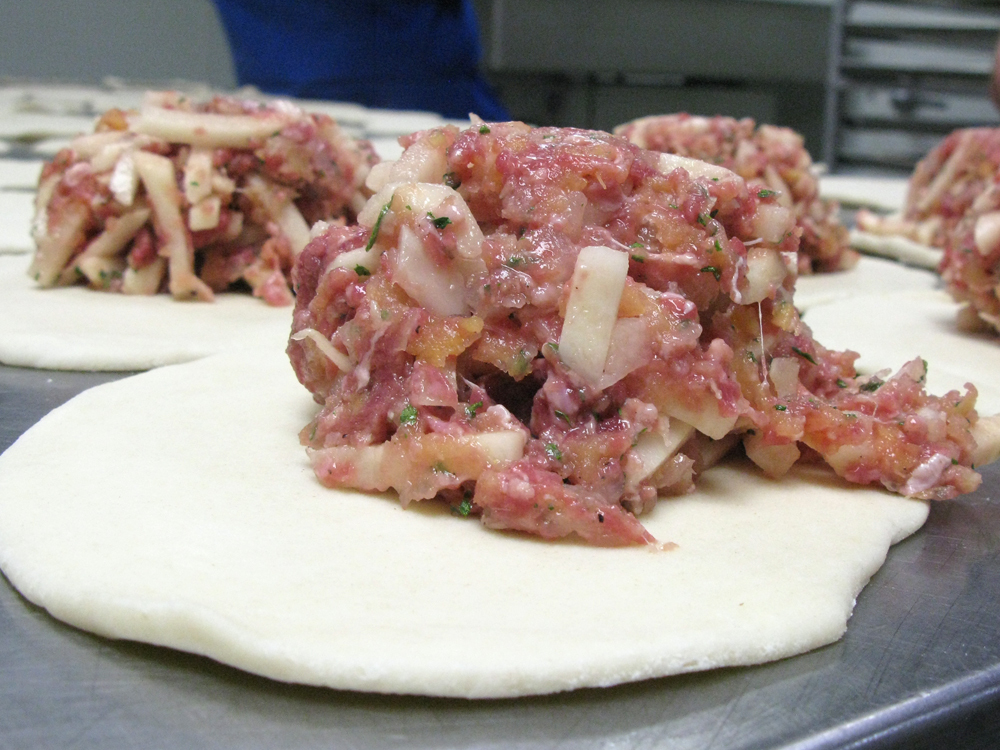 Scooping, or "gobbing," the filling onto the crust.

Cut shortening into flour and salt, add water and knead until well blended. Form into four balls and chill. Coat with plenty of flour and roll into circles.

1/2 cup each of diced onion and rutabaga

Mix all ingredients in a large bowl. Divide into four equal portions and place in center of each crust. Fold over and seal edges. Bake at 400 degrees for 50 to 60 minutes.