Accessibility links
'Aftermath' Illuminates Lives Of Uprooted Iraqis Composed almost entirely of interview transcripts, the off-Broadway play focuses on ordinary citizens whose lives have been upended by the conflict in their home country. It's a powerful look at conflict from the inside. 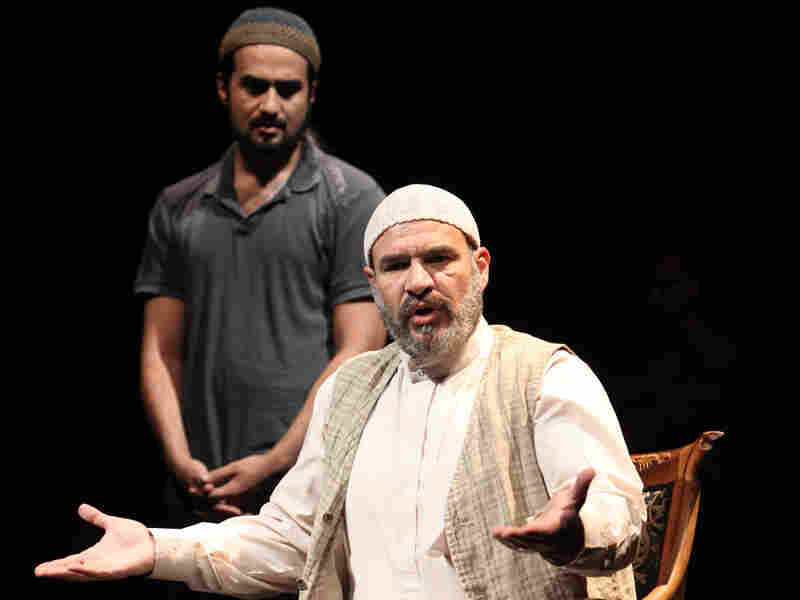 Abdul Aliyy the Imam (Demosthenes Chrysan, center, with Fajer Al-Kaisi as the translator Shahid) shares his stories of life in Iraq — and the events that led him to leave. Joan Marcus hide caption 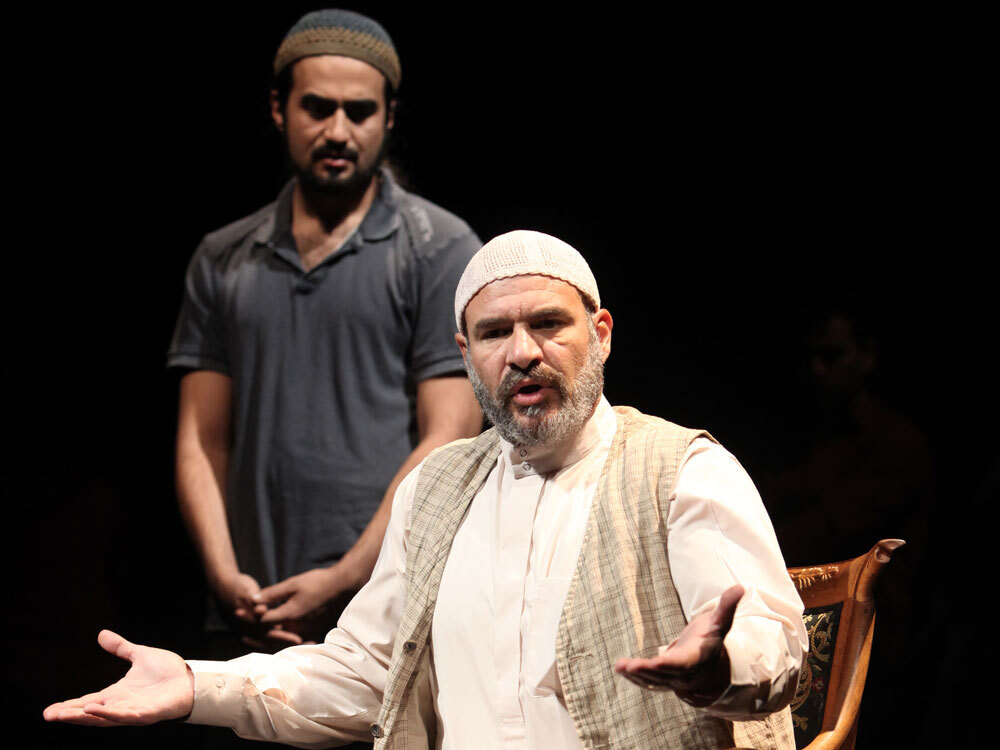 Abdul Aliyy the Imam (Demosthenes Chrysan, center, with Fajer Al-Kaisi as the translator Shahid) shares his stories of life in Iraq — and the events that led him to leave.

Erik Jensen on the Iraqi's view of Americans

Jessica Blank: "We expected people would be cautious, that people might be hostile."

Erik Jensen and Jessica Blank on the legacy of Iraq

By and large, plays and movies about the Iraq war have focused on either American soldiers or the politics leading up to the conflict. At the New York Theatre Workshop, the new documentary play Aftermath offers a completely different focus: It looks at the stories of ordinary Iraqis whose lives have been uprooted by the war.

Playwright Erik Jensen says it's all too easy for Americans to see Iraqi civilians as numbers — the nameless faces populating the news coverage.

"Just the other day, it said in the newspaper, '21 people killed in a bombing north of Baghdad,' " Jensen says. "What does that mean? You know, '21 people.' Well, they were a pharmacist, a lawyer, a doctor, somebody who was on the way to pick up something for their mother, somebody who was going to propose to his girlfriend. These are the things that never get given to us in the paper."

In Jordan, Discovering An Iraq In Exile

Jensen and his writing partner (and wife) Jessica Blank set out to meet some of these regular people, and to find out about their lives. While they deemed it too dangerous to travel to Iraq, they did fly to Jordan, where there's a community of almost 1 million displaced Iraqis.

Blank says she went into the interviews with some trepidation, but found all 37 of the people they met to be warm and welcoming — inviting them into their homes, offering them tea and cookies, showing them family photographs.

"Nobody we met was angry at us," Blank says. "Nobody we met treated us with any mistrust. And I think after 25 years of living with Saddam, the Iraqis that we met really understand, on a deep and visceral level, that there's a difference between the policies of a government and the people of a country."

Blank and Jensen returned from Jordan with hundreds of hours of recorded interviews. They gathered a team of actors at Dartmouth College last summer to work on creating the play from the raw transcripts, many of which tell harrowing stories. One of the actors who participated in that process was Demosthenes Chrysan, who plays an imam.

"The material was so intense," Chrysan says, "that every single actor in that room, somewhere in the middle of reading it, just broke down. And we had to stop, because it was just overwhelming."

Blank and Jensen ultimately winnowed that initial hoard of material down to six real stories, among them a pharmacist whose nephew gets killed by contractors, a married couple who flee the country because of militia harassment and a dermatologist who ends up doing triage at a hospital in Baghdad.

And they created a composite character — a translator. 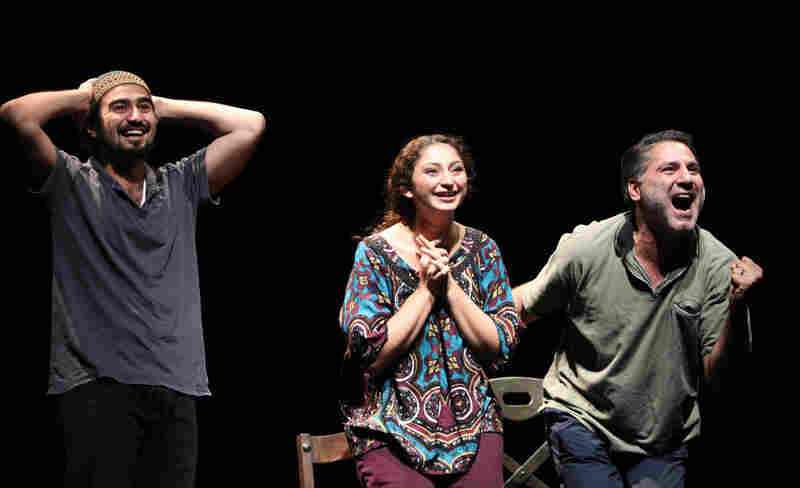 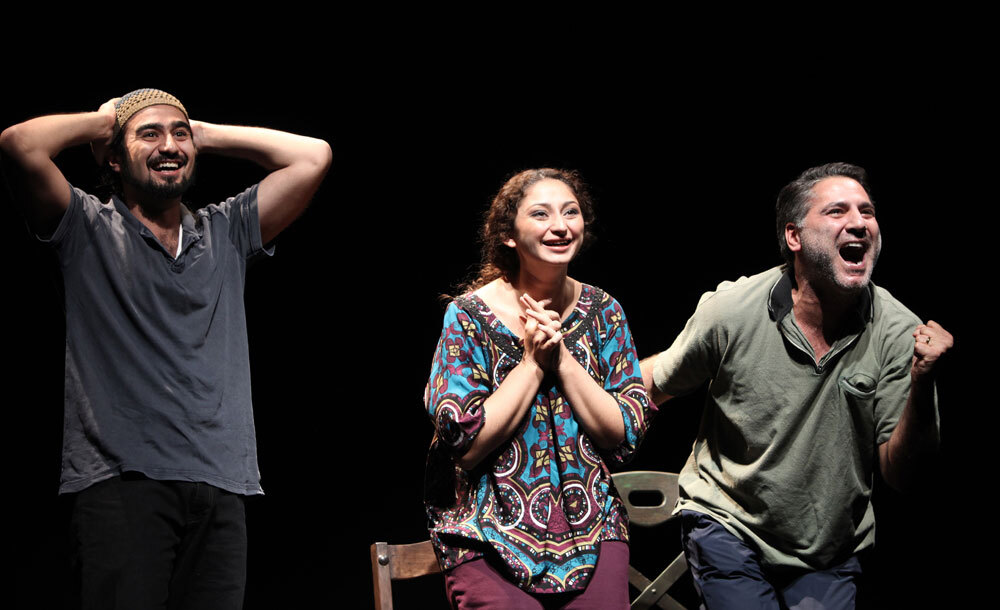 Al-Kaisi (left), Rasha Zamamiri and Omar Koury are among the actors who portray six true stories of Iraqi emigrants in Aftermath.

"We realized that the act of translation was what had enabled us to cross that gap," Blank says, "and that it was imperative that we have a translator character in the play and that we deal with the issue of translation." Fajer Al-Kaisi, who was born in Baghdad and grew up in Montreal, plays Shahid, the translator.

"We discovered that that actually helped ease the trauma," Al-Kaisi says, "to have someone sort of guide you through it, or to have someone kind of weave in and out of the stories and sort of pop in."

Al-Kaisi says Jensen and Blank have translated the lives of these real Iraqis into effective, powerful theater.

"I think they've struck a really kind of beautiful balance," he says, "where everyone in this play has something horrific and horrendous and tragic happen to them, but yet they're still accessible as human beings, and they're still in the room with you as human beings."

Jensen hopes the play can find a life outside New York City; he thinks audiences will recognize themselves in the people onstage.

"Like most Americans, most Iraqis just want to, you know, get to their jobs, feed their kids, get home — they're fairly apolitical," he says. "I actually think the Iraqis that I met have more in common with my conservative, family-oriented Lutheran relatives back in Minnesota than they do with somebody in New York City, even."

Aftermath runs at the New York Theatre Workshop until Oct. 18.