Accessibility links
G-20 Eyes Deal On Bank Reserves G-20 leaders will likely leave Pittsburgh with an agreement to have banks build up their capital reserves while cutting back on bonuses and other forms of compensation. The new capital rules will be phased in and banks would have until the end of 2012 to meet the new requirements.

G-20 leaders will likely leave Pittsburgh with an agreement to have banks build up their capital reserves while cutting back on bonuses and other forms of compensation. The new capital rules will be phased in and banks would have until the end of 2012 to meet the new requirements.

Economic developments at the G-20 were overshadowed by the Iran news, but the G-20 leaders who met last night at dinner and all day today in Pittsburgh issued a final statement this afternoon outlining a number of economic reforms.

NPRs John Ydstie now joins us to talk about them. Hi, John.

SIEGEL: I guess the big news here is the decision by the G-8, the group of eight wealthy nations, to pass the baton to the G-20 meeting - the responsibility for monitoring the world economy now rests with the bigger group.

YDSTIE: Thats right. In their communique, the leaders say we designate the G-20 to be the premier forum for international economic cooperation. And even if that might seem a little self-serving, remember the G-20 represents about 90 percent of the global economy and about two-thirds of the worlds people. Most importantly, this officially gives emerging powers like China, India and Brazil a place at the table, where global economic policies are developed.

In a written statement announcing the shift this morning, the White House said this decision brings to the table the countries needed to build a stronger more balanced global economy, reform the financial system and lift the lives of the poorest.

SIEGEL: So is it for the G-8? Can we say good-bye to that group?

YDSTIE: Well, my understanding is that G-8 will continue to function, but it will not be viewed as the top global economic decision-making group which it has been since way back in the 1970s.

SIEGEL: Now one big issue in the headlines before this G-20 Summit was a call for a cap on bamkers bonuses called by French President Nicolas Sarkozy. What did the leaders decide about that?

YDSTIE: Well, they didnt go along with Mr. Sarkozy on caps, but they did issue some recommendations on compensation in the financial world. The aim is to try to eliminate practices that encourage the big risk taking that helped spark the financial crisis. He called for a ban on multi-year bonus guarantees and even (unintelligible) back pay if deals or investments go back. And if banks have low capital, limiting bonuses to a percentage of the capital.

SIEGEL: Speaking of capital, what about the cushions that banks hold against losses? Any progress enforcing banks to increase those capital cushions?

YDSTIE: Not a lot of progress there. The leaders did urged banks to set aside more capital by the end of 2012. But they put off coming up with specific triggers until the end of next year. So we got a timetable, but no hard figures.

SIEGEL: Now, another big U.S. goal at this summit was to get China and other big exporting countries to export less and consume more at home, while the U.S. starts saving more and perhaps consuming less. Anything new on that front?

YDSTIE: Well, the leaders endorsed whats called a framework for strong sustainable and balanced growth. And that framework will be used to make the kind of changes you just mentioned. The idea is to avoid the big imbalances in the global economy that contributed to the financial crisis.

There was concern China might not sign up for this because it feared that it might not grow fast enough if it had to depend more on internal growth instead of exports. But China appears to have gone along with the deal. One caret was the endorsement by the leaders of a plan to give emerging economies, mostly China, a bigger voting share at the International Monetary Fund. The plan calls for rich countries, specifically in Europe, to give up 5 percent of their voting rights to the emerging nations.

SIEGEL: NPRs John Ydstie joining us from Pittsburgh. So who is in the G-20? Some members are obvious, some not so. You can test your G-20 IQ. at the Two-Way, NPRs news blog. Go to npr.org/two-way. 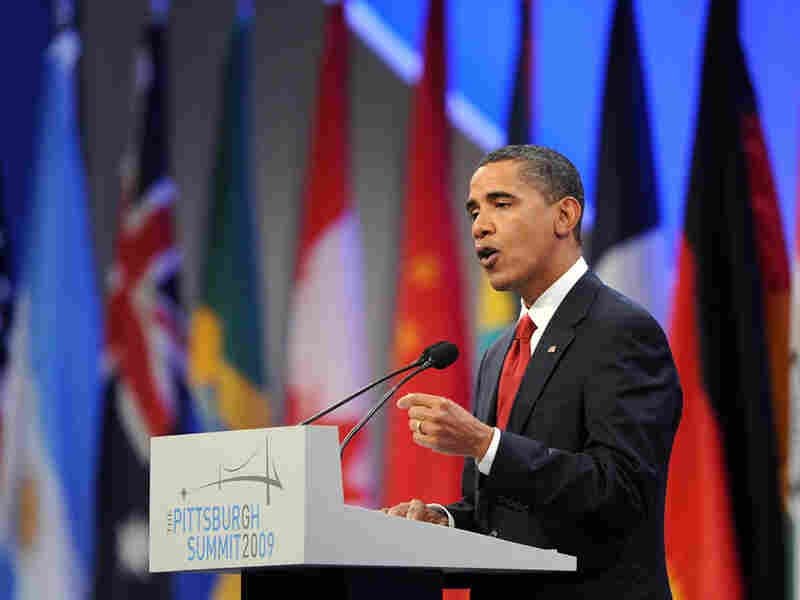 President Obama speaks during a news conference Friday at the end of the G-20 Summit in Pittsburgh. Jewel Samad/AFP/Getty Images hide caption 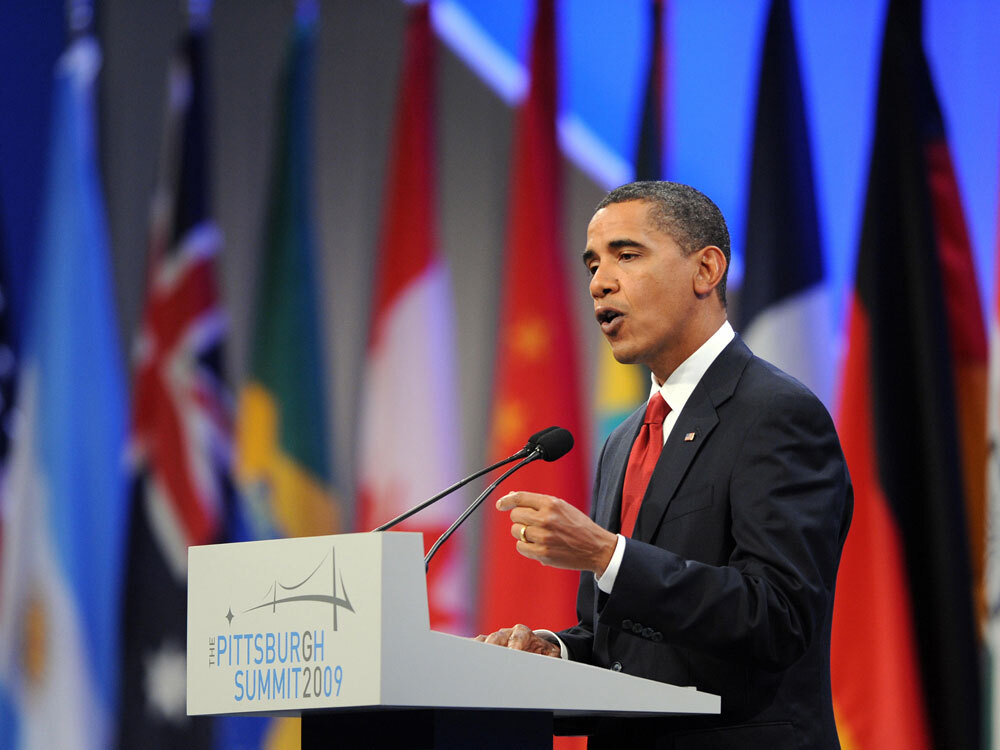 President Obama speaks during a news conference Friday at the end of the G-20 Summit in Pittsburgh.

President Obama on Friday warned Iran that it is "on notice" and faces international condemnation — and perhaps confrontation — if it continues to work on a previously secret nuclear facility.

"The choice they make over the next several weeks and months could well determine their ability to rejoin the international community," Obama said during a late afternoon news conference at the close of the G-20 economic summit in Pittsburgh.

And though Obama said he preferred a diplomatic solution to Iran's apparent violation of international nonproliferation rules, he did not rule out military action.

"I've always said that we do not rule out any options when it comes to [United States] security," Obama said. "But the preferred action is to resolve this in diplomatic action."

If diplomacy doesn't work, he said, "other consequences might follow." Leaders from six countries, including the United States, are scheduled to meet with Iranian officials Oct. 1 in Geneva to discuss Iran's nuclear enrichment program.

The president also cited what he called an "unprecedented show of unity" among international leaders — including those from China and Russia — that Iran's actions had raised "grave doubts" about whether it was developing a nuclear program for "peaceful purposes."

Other news out of the summit had been subsumed by the fast-developing story of Iran's covert construction of a nuclear facility in the Shiite Muslim holy city of Qum.

Friday opened with a surprise morning news conference, during which Obama and the leaders of France and Great Britain accused Iran of covertly building a nuclear fuel plant. They issued warnings of its consequences.

At that news conference, Obama asserted that Iran is "breaking rules that all nations must follow," and French President Nicolas Sarkozy raised the specter of sanctions against Iran unless it complies with international nonproliferation rules in the next two months.

Iran responded by confirming that it was building a "semi-industrial enrichment fuel facility," a project that U.S. officials say they had been tracking for years.

In anticipation of a confrontation over the facility, Iran on Monday reported to the International Atomic Energy Agency that it was engaged in a "pilot project" to enrich fuel, but that no nuclear material was present at the facility.

Iranian President Mahmoud Ahmadinejad, in an interview with Time magazine, characterized as "a mistake" Obama's assertions about Iran's nuclear efforts.

"We have no secrecy," he said in the interview. "We work within the framework" of the IAEA.

The Way Ahead In Afghanistan

At the afternoon news conference, Obama also was pressed on how he planned to proceed militarily in Afghanistan. 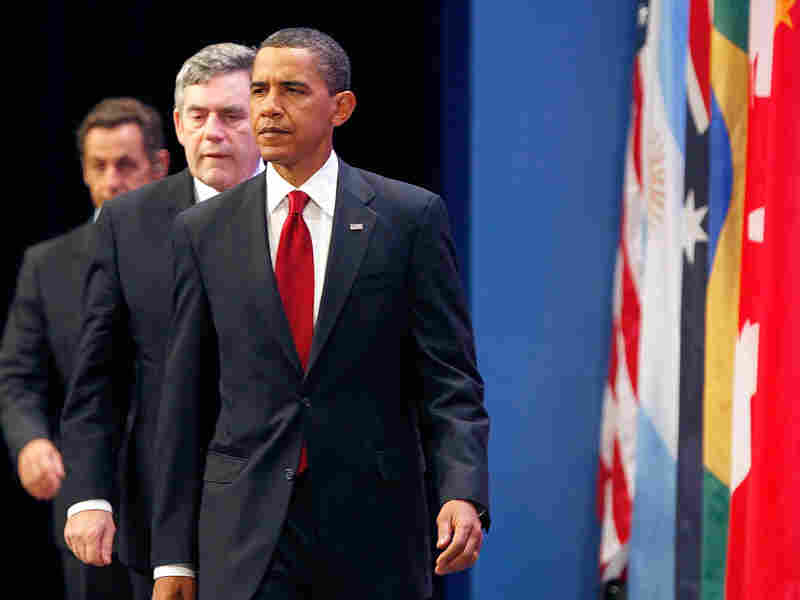 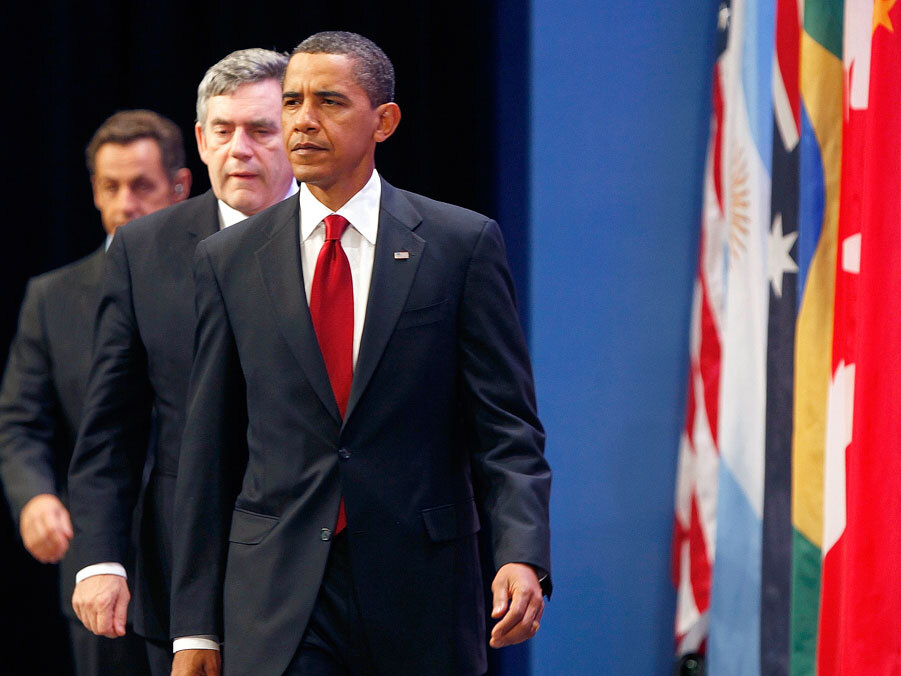 Acknowledging the public's weariness with the war, Obama said that his overriding goal remains dismantling the al-Qaida network and establishing stability in Afghanistan and Pakistan.

"After several years of drift" in Afghanistan, he said, "it's important to examine our strategies." But much of the success going forward, he said, is linked to Afghans' ability to provide for themselves and their own military training, and the ability of Afghanistan's government to deliver leadership and security.

"This is not easy," he said. "I would expect that the public would ask some very tough questions, and that's exactly what I'm doing."

Obama has been under increasing scrutiny over his intentions in Afghanistan following the leak of a military assessment by his top commander in that country that advocated for a troop surge.

The president has indicated he intends to wait until the disputed Afghan presidential election is resolved before settling on a way forward.

The White House earlier Friday issued a statement reporting that Obama and British Prime Minister Gordon Brown had met and "discussed Britain and the United States' shared interest in Afghanistan and ensuring it could never again be used for attacks by al Qaeda against the United Kingdom, the United States or our allies."

Obama's afternoon news conference had been intended to tout the G-20's progress at stabilizing the world financial system after a historic crisis, and the move away from 30-plus years of world economic order dominated by Western economic powerhouses known as the Group of Eight.

The president has pushed for the shift, arguing that countries like Brazil, China, India and South Africa with dynamic, rapidly expanding economies deserve a say in international conversations.

A statement released by the White House says: "This decision brings to the table the countries needed to build a stronger, more balanced global economy, reform the financial system, and lift the lives of the poorest."

It is a move, however inevitable, that was not without its critics in Europe. They include Italian Prime Minister Silvio Berlusconi, who is concerned about the Continent's waning international economic influence.

Obama lauded progress made at the summit on several fronts. Leaders agreed that banks should be better capitalized and bankers' pay curtailed, though no specific limits were set. And they reached consensus on a plan that would reduce carbon emissions by phasing out $300 billion in global subsidies for fossil fuel production and consumption.

The leaders also endorsed an effort to lessen trade imbalances between countries including the United States and China.

"We brought the global economy back from the brink," he said, crediting an international stimulus package the group approved earlier as the "turning point" in calming the world's economic free fall.

A 19-page "Leaders' Statement" issued late Friday afternoon lauded economic progress it says the countries had made because of action taken at their last meeting in April. But warned that "a sense of normalcy should not lead to complacency."

"The process of recovery and repair remains incomplete," it says, with high unemployment still bedeviling many countries and "conditions for recovery of private demand not yet fully in place."