The trial of former Israeli Prime Minister Ehud Olmert on corruption charges began Friday in Jerusalem. Among other things, Olmert is accused of receiving illegal contributions from a Jewish-American businessman.

From NPR News, this is ALL THINGS CONSIDERED. Im Madeleine Brand.

In Jerusalem today, a corruption trial got underway. It's no ordinary trial, though. The defendant is the former prime minister, Ehud Olmert. It's the first time in Israel's history that a former head of government has been brought to trial on criminal charges. Olmert resigned from office a year ago after he was indicted, but he maintains his innocence.

As Sheera Frenkel reports, the effects of the trial are resonating across Israel.

SHEERA FRENKEL: This was the scene at Ehud Olmert's party headquarters, during a holiday toast made in his first year as prime minister in 2006. It was rife with discontented voters. Dozens of protest groups united under one cause: to bring the then-prime minister to justice. Their calls reverberated far into the Israeli public, and have spurred a lasting movement for greater government transparency.

Today, Olmert went on trial for fraud, breach of trust and failure to report income. According to the indictment handed down by Israel's attorney general, Menahem Mazuz, it is a watershed moment for those seeking to reform Israel's electoral system. Michael Partem is a lawyer with the Israeli government watchdog, The Movement for Quality Government.

Mr. MICHAEL PARTEM (Attorney, The Movement for Quality Government): We, the country, the public has come a long way in terms of demanding accountability and transparency, and in upholding public officials to a higher standards of norms in terms of the public good. Otherwise, you know, we wouldnt have had the prosecutions and indictments that we have coming down now, which I take as at least partly being a good sign.

FRENKEL: In the last month, two former Israeli ministers have begun serving jail sentences for crimes committed while they were in office, while several more are under investigation. In addition, Israel's former president, Moshe Katsav, is currently on trial charged with rape and sexual assault. Partem said the wave of elected under public scrutiny could mark a turning point for the Israeli government.

Mr. PARTEM: Talking about watershed moments, I mean you have a prime minister being indicted and a president going on trial. It's got to have an impact. You know, I really - I was looking at the indictment today, you know, and you see the word prime minister there in the indictment. And you pause because it's really an indictment of an entire society and country, when the highest elected official is accused of such behavior.

FRENKEL: Most of the offenses Olmert is accused of were committed during his time as Cabinet minister and as mayor of Jerusalem. Shalom Yerushalmi is a political commentator at one of Israel's largest daily newspapers, Ma'ariv. He was one of the first journalists to report on Olmert's allegedly corruption.

Mr. SHALOM YERUSHALMI (Political Commentator, Ma'ariv): (Through translator) Dozens of people get to his rank in society and can't resist the temptation. With Olmert, it was unique. It stood out because he did it in a careless manner.

FRENKEL: Israeli legal experts say that Olmert could face years in prison if he is found guilty. His trial will likely last months and the list of 280 witnesses includes some of the biggest names in Israeli business. Outside the courtroom today, Olmert again rejected the charges.

FRENKEL: But Yerushalmi says that many Israelis may have already judged him.

Mr. YERUSHALMI: (Through translator) You won't find anyone here anymore that likes Olmert. People dont like that he used the public, his position of authority to better himself and his family. There is one message here from the public to its officials: We won't tolerate this type of behavior, stop it.

FRENKEL: For now, the voices of protest outside Olmert's party headquarters have quieted, but Israelis are waiting to hear what will be said inside the courtroom. 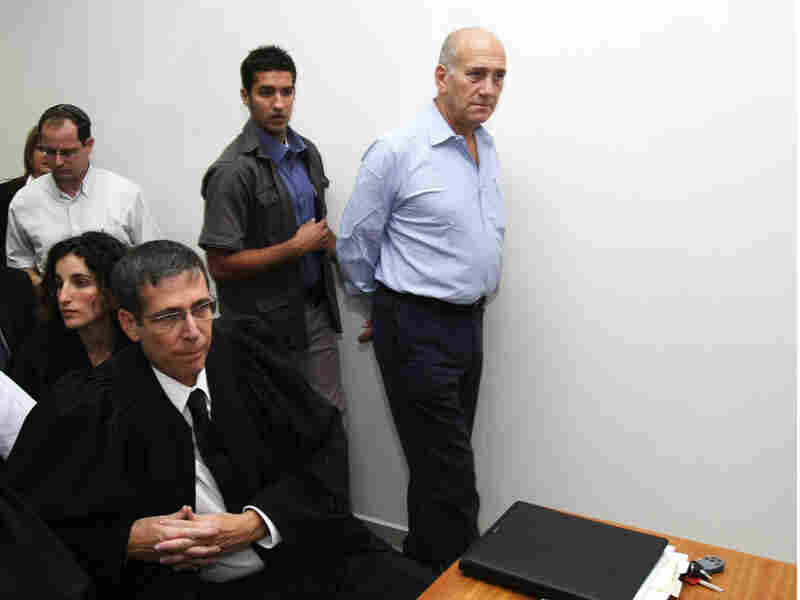 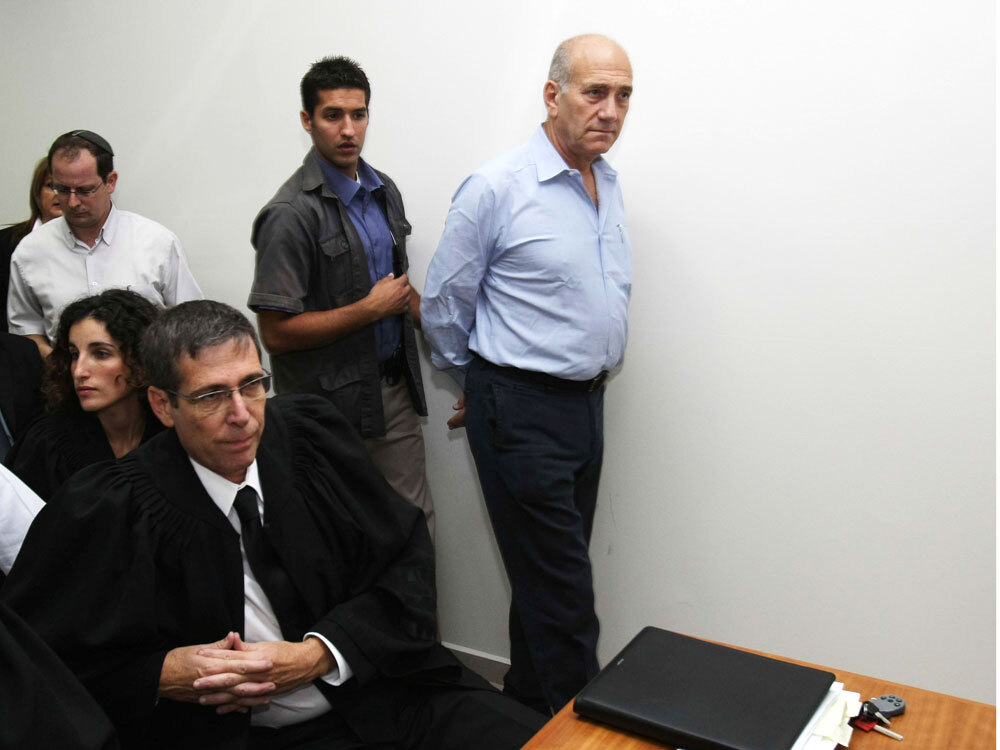 Former Israeli Prime Minister Ehud Olmert arrives in court for the start of his corruption trial Friday. Olmert is accused of bribery and fraud.

Former Prime Minister Ehud Olmert appeared in a Jerusalem courtroom Friday for the opening of his trial on corruption charges. The first hearing was brief, but the session marked a historic precedent: the criminal prosecution of a man who was Israel's highest elected official.

If found guilty, Olmert, 63, could face a prison term of up to five years on the fraud charge alone. His trial will resume in February.

Sheera Frenkel Reports On The Response In Israel To The Trial

Olmert, who left office in March, is the first prime minister of Israel to stand trial for corruption. The high-profile trial raises broader questions about the country's political culture, which had been studded with scandals over the past decade.

In June, Olmert's former finance minister was sentenced to five years for embezzlement, and another of his Cabinet officials got four years for taking bribes.

Israel's former president, Moshe Katsav, is on trial on charges of rape and sexual harassment.

The spate of charges against politicians stirred a public outcry in Israel, with demands that the political parties should clean their own houses. Columnists in major news media demanded to know why the nation's political culture was so corrupt.

Analyst Daniel Levy says there is a sense in Israel that the political class protected its own for too many years. "That red lines and consequences were not laid down over a long period of time, which encouraged this kind of abuse," he says.

Levy, a former adviser to the Israeli government who is now a senior fellow at the New America Foundation, says the Israeli political system has some built-in problems that contribute to corruption. He says the parliamentary structure often forces major parties to form coalitions with small "boutique parties" that elect their leaders according to parochial interests.

Some members of the small but influential Shas party, for instance, continued to support party leader Aryeh Deri, even after he was convicted in 2000 of taking bribes while he was Israel's interior minister. Most Shas members are ultra-Orthodox Jews of Middle Eastern descent who see their party as an expression of ethnic solidarity.

Israel's current foreign minister, Avigdor Lieberman, is leader of the Israel Beiteinu party, composed largely of immigrants from the former Soviet Union. He retains strong support within his party, despite a criminal probe that recommended he be indicted for bribery. Lieberman says he is innocent and that there is a police conspiracy against him.

Despite strict campaign-finance laws, Levy says there are potentially vast sums of money available from wealthy Americans who support various factions in Israel. The result, says Levy, is that "you have a system rife with all kinds of ways of trying to get around campaign-finance limits."

David Makovsky, an analyst at the Washington Institute for Near East Policy, says the latest corruption charges come at a time when public opinion in Israel is ripe for reform. Israel, he says, is a country with socialist origins, whose early leaders led "very modest, very simple lifestyles."

"The foibles of politicians have come under exceptionally sharp scrutiny," he says. "[The Israeli public] does hold leaders to a high standard."

Some of the charges against Olmert are that he scammed from good causes to support a highflying lifestyle.

Most of the charges stem from Olmert's time as mayor of Jerusalem and as a Cabinet minister. He's accused of double- and even triple-billing American Jewish groups for travel expenses when he came to the United States for speeches.

Prosecutors say Olmert bilked groups such as the Israel Policy Forum, the America-Israel Friendship League and the Simon Wiesenthal Center out of thousands of dollars.

Yet neither Makovsky nor Levy sees Olmert's trial as necessarily ending his political career. "It may well turn out that Olmert does not go down," Levy says, adding that the case is complicated and the former prime minister has a very strong defense team.

If he is not convicted, Makovsky says Olmert could make a comeback because of his experience. He says it comes down to a difference in how Israelis and Americans look at their politicians. "Between the novel and the experienced, Americans will pick the novel," Makovsky says, "an Obama from Illinois, or a Clinton from Arkansas."

"Israelis tend to go for the experience," he adds, "because in their view they live in one of the roughest neighborhoods in the world, and they want experienced leaders."

In that sense, Makovsky likens Israeli politics to the old-fashioned carnival shooting gallery, where an endless line of duck-shaped targets parades in front of the shooters. "They get shot down, they go to the back of the line. When the next guy gets shot down, they come back up," he says.