Accessibility links
Plutonium Shortage Could Stall Space Exploration NASA is running out of the radioactive material used to power missions to the outer reaches of the solar system. To avoid future delays, the White House has asked for funds to produce more of the fuel source, but it's unclear whether Congress will approve the expense. 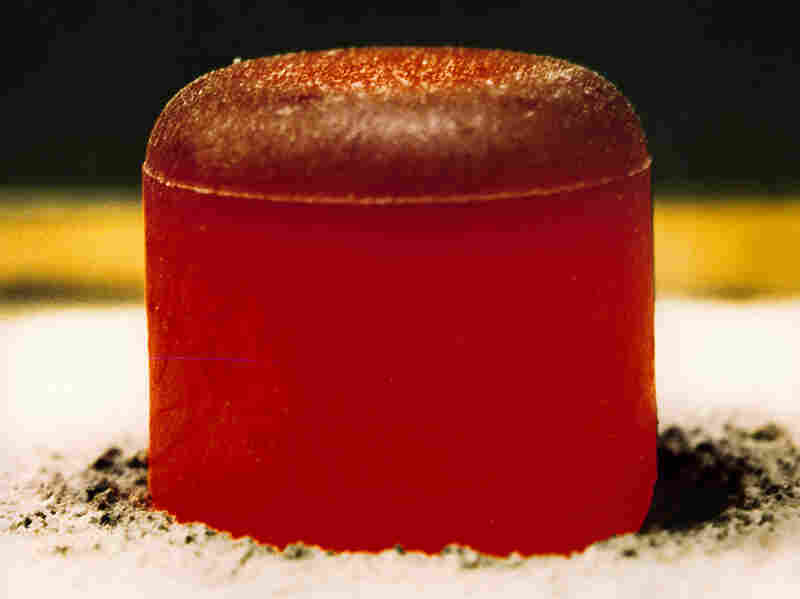 A pellet of plutonium-238 dioxide glows red because of heat generated by the radioactive decay of the material. Los Alamos National Laboratory hide caption 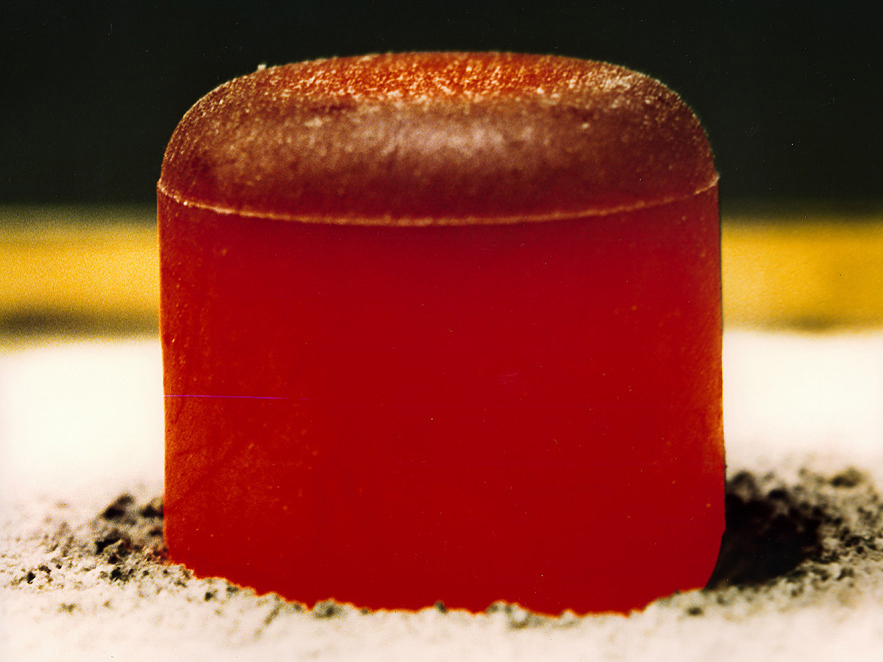 A pellet of plutonium-238 dioxide glows red because of heat generated by the radioactive decay of the material.

NASA is running out of the special kind of plutonium needed to power deep space probes, worrying planetary scientists who say the U. S. urgently needs to restart production of plutonium-238.

But it's unclear whether Congress will provide the $30 million that the administration requested earlier this year for the Department of Energy to get a new program going.

Nuclear weapons use plutonium-239, but NASA depends on something quite different: plutonium-238. A marshmallow-sized pellet of plutonium-238, encased in metal, gives off a lot of heat.

"If you dim the lights a little bit, it glows a little red, because it's very hot," says Stephen Johnson, director of space nuclear systems and technologies at the Idaho National Laboratory.

Nearly two dozen space missions have been powered by plutonium-238, including famous ones such as the Voyager probes in the 1970s, the Galileo probe that orbited Jupiter, and the Cassini spacecraft that is currently sending back images of Saturn's rings and moons. Spacecraft powered by plutonium-238 have revealed odd wonders of the solar system, like volcanoes on Jupiter's moon Io and methane lakes on Saturn's moon Titan.

But stores of plutonium-238 are running low, because the production of this man-made material was a byproduct of Cold War activities, and the U.S. has not made any new supplies since the 1980s.

"We've been living off of the material that we had produced up until that time, and if you keep using material and you have a finite supply, eventually you run out, and that's where we are right now," says Ralph McNutt, a planetary scientist at the Johns Hopkins University Applied Physics Laboratory.

For a while, the U.S. purchased plutonium-238 from Russia. But Russia's production facilities were also shut down long ago, and now Russia has run out, too.

According to McNutt, NASA has enough plutonium-238 for its next Mars rover, called the Mars Science Laboratory, and the next planned major mission to the outer planets.

The agency could also potentially have a relatively low-cost, Discovery-class mission that would use only a small amount of the stuff, to test a new power-generation technology that could more efficiently convert the heat of plutonium-238 to electricity.

But that's about it, and after that, NASA would be stuck, McNutt says. "It's kind of like having a car, and if all the gasoline stations are closed and are out of gasoline, and you're out of gas," he says, "you're not going to go anywhere."

Without This Plutonium, Expect Delays

NASA could still explore places close enough to the sun for solar power to work. But for going far out into space, there is no substitute for plutonium-238, because of its unique properties.

"There isn't any other option," says McNutt, who was co-chairman of a National Research Council committee that released a report on this issue in May. That report said the shortage has already forced NASA to delay some missions and limit others.

And even if the Department of Energy restarts production now, it would still take about eight years to ramp up to making the 11 pounds or so needed by NASA each year.

Restarting production would be expensive, the report said — likely in excess of $150 million — but unless action is taken, NASA could find itself without needed supplies a decade from now.

This report seemed to get people's attention. The administration's budget request for the Department of Energy for fiscal year 2010 included $30 million to move toward new production.

"For us, that was a major step forward. A very positive thing, for both NASA and Department of Energy," says Hal Bell, director for the advanced planning and analysis division in the Office of the Chief Engineer at NASA headquarters in Washington, D.C. "Previously, we had not seen that level of commitment."

Waiting For Congress To Decide

But as an appropriations bill made its way through Congress over the summer, the Senate knocked the amount to zero. And the House lowered it to just $10 million.

The White House issued a "statement of administration policy" in July urging Congress to give the requested funds for restarting domestic production, saying it's "essential" for planned NASA missions as well as national security applications.

Planetary scientists can now only wait to see what happens. Less money would mean more delay. "It really is the kind of thing where people will wake up 10 years from now and say, 'What were they thinking?' " says Alan Stern, a planetary scientist at the Southwest Research Institute in Colorado and chief scientist for NASA's New Horizons probe.

Right now, the New Horizons spacecraft is out past Saturn, headed to Pluto. "Our mission is a good example," Stern says. "We are going to Pluto in the Kuiper belt, where the sunlight is a thousand times lower and the temperatures are close to absolute zero."

He says this mission would simply not be possible without plutonium-238.