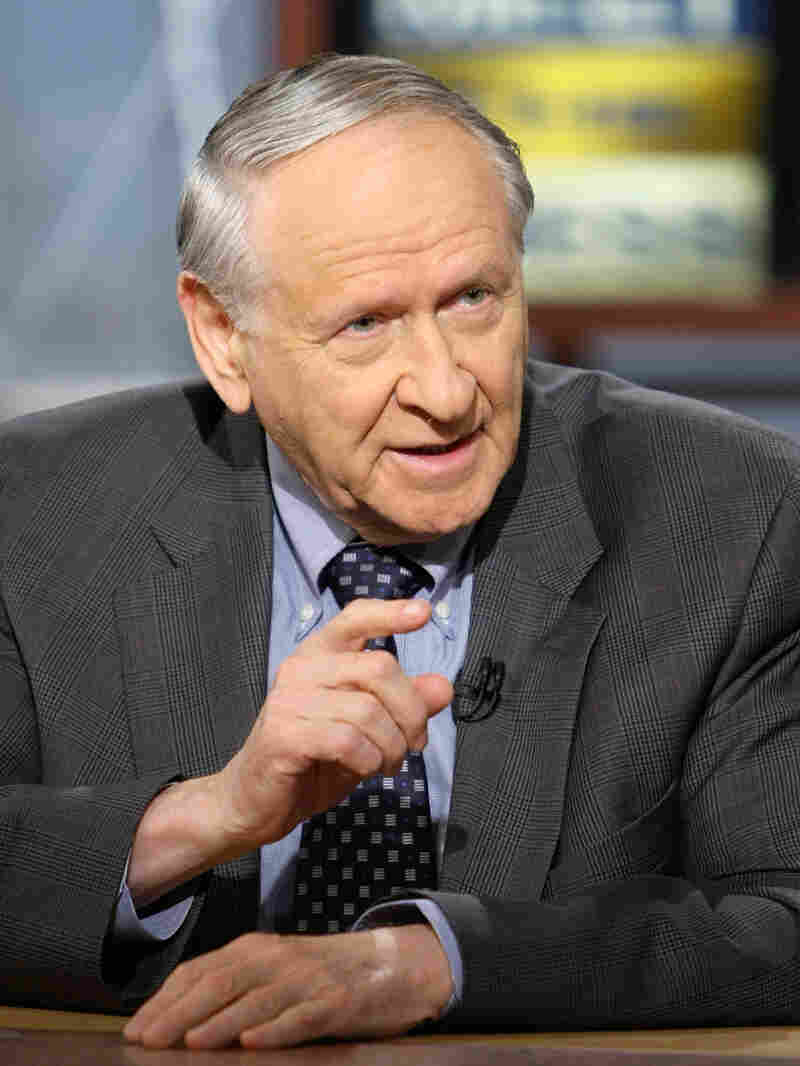 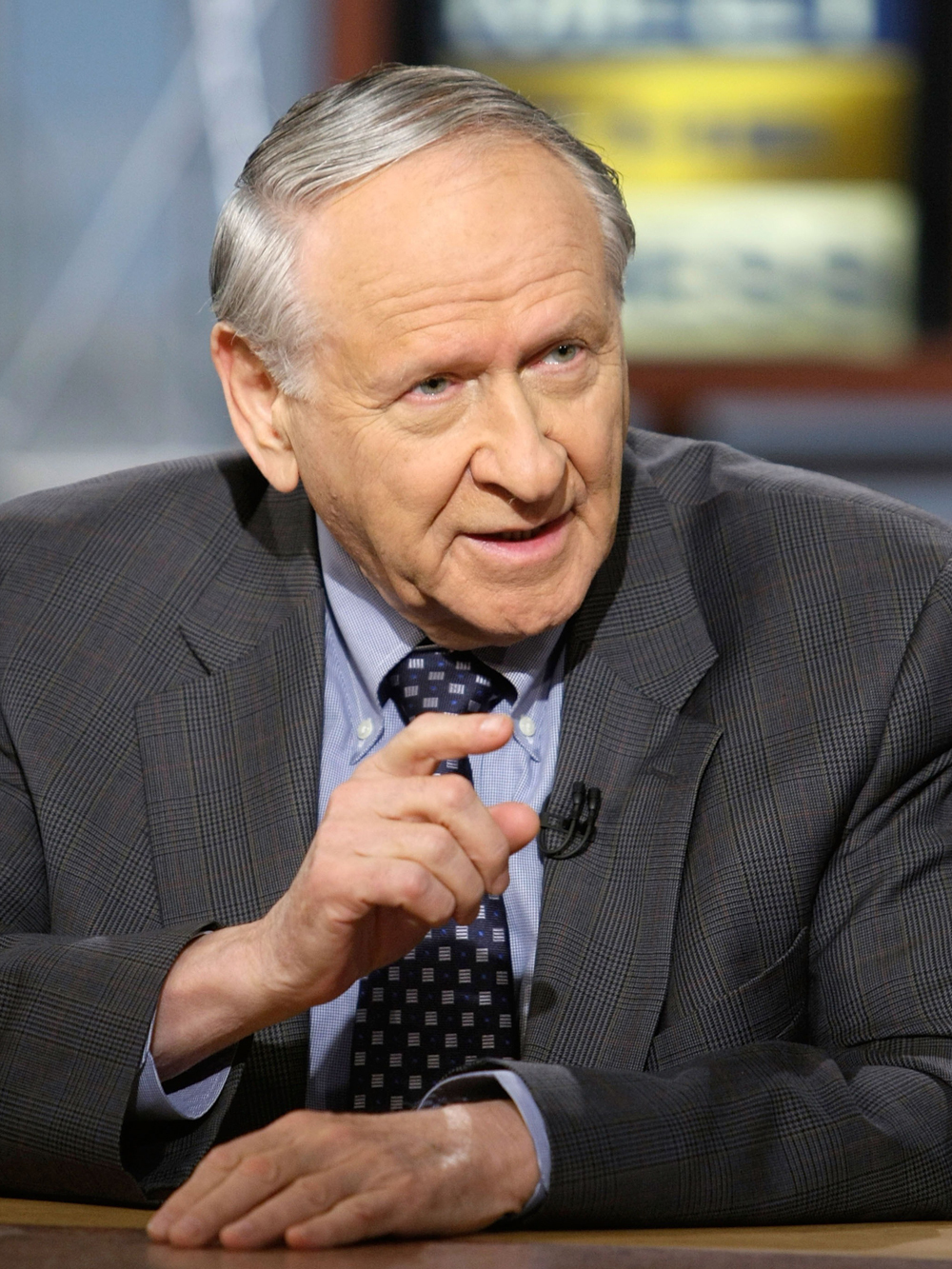 William Safire on NBC's Meet The Press in 2007.

William Safire, the savvy speech stylist who turned phrases for President Nixon and later conjured up Pulitzer Prize-winning contrarian columns for The New York Times, died Sunday at 79. Times spokeswoman Diane McNulty said he died of pancreatic cancer at a hospice in the Maryland suburbs outside Washington, D.C.

"I join with my father in saying how much everyone at The New York Times is saddened by Bill Safire's death," New York Times publisher Arthur Sulzberger Jr. said in a written statement. "For decades, Bill's columns ... delighted our readers with his insightful political commentary, his thoughtful analysis of our national discourse and, of course, his wonderful sermons on the use and abuse of language. Bill will be greatly missed."

Safire is perhaps best known now as the first true conservative columnist for The New York Times or as the phrase-parsing wordsmith for the Times' Sunday magazine in his column on language usage. But Safire's life and career served up ample proof that there are second — and even third — acts in American life.

He was born in New York City on Dec. 17, 1929, as William Safir, but later added the "e" to match his name's spelling to pronunciation. Safire attended Syracuse University, started public life as a reporter and, after a stint in the U.S. Army and then another turn as a reporter, became a resourceful publicist; and then he got a big break.

In 1959, at the Moscow World's Fair, he lured the young American Vice President Richard Nixon into a model home built by Safire's client.

A crush of reporters trapped Nixon and Soviet Premier Nikita Khrushchev. The ensuing "kitchen debate" between the two drew international attention for the combative American politician — as well as plenty of headlines for the home builder.

Impressed, Nixon stayed in touch, and Safire found himself writing speeches for Nixon's successful presidential campaign in 1968. That November, Safire took a story from the campaign trail and wove it into Nixon's victory speech. The president-elect spoke of a small town he had visited:

"Five times the population was there in the dust," Nixon recalled. "Almost impossible to see, but a teenager held up the sign: 'Bring us together.' And that will be the great objective of this administration at the outset, to bring the American people together."

Safire joined a White House press office stocked with talented and now-famous figures, including Patrick Buchanan, Diane Sawyer and David Gergen. And Safire was particularly playful as he drafted speeches for key White House officials. But many of them, rather than drawing Americans together, were caustic and divisive during a time of wars and mass protests.

One classic Safire coinage surfaced in a speech he wrote for Vice President Spiro Agnew, who was lashing out at critics of the Nixon administration. Safire decided to lean on alliteration as Agnew memorably dismissed the "nattering nabobs of negativism." (A nabob, naturally, being a governor of an Indian state during the Mogul empire.)

"The code of the speechwriters is, you never claim a phrase," Safire told NPR's Renee Montagne in 2008. "But the vice president did say, 'I got that from Safire.' And it was either that or 'the hopeless, hysterical hypochondriacs of history.' And he went with the better one."

Safire left the Nixon administration in early 1973 and began writing periodic columns for The Washington Post. Later that year, as the Watergate abuses of power scandal continued to snowball, Arthur Sulzberger Sr., publisher of The New York Times, tapped him to become the paper's first conservative op-ed columnist. It caused a small uproar within the paper and journalism circles. Such leading writers as former Times reporter David Halberstam argued it was a betrayal to hire a Nixon apologist — someone who had crafted rhetoric for an administration whose abuses of power were becoming more evident.

For conservatives and Republicans, his presence at the Times gave them hope.

"Here he was just sitting smack dab in the middle of this very liberal newspaper, and giving no quarter nor asking for any, and writing just what he thought about conservative issues and not backing down," former Nixon speechwriter Ben Stein told NPR when Safire retired from his political column in 2005. "And this was a great beacon to us in the years of darkness."

And Safire's critics started to cool down when it emerged that his telephones had been tapped, too.

Safire did indeed write largely in favor of Republican and conservative causes, but a strong libertarian streak led him to avoid any orthodoxy. He frequently trumpeted subsequent presidential scandals, largely but not exclusively involving Democrats, such as "Lance-gate" — the banking affair that dragged down Bert Lance, President Jimmy Carter's budget director.

Safire won a Pulitzer Prize for commentary in 1978 for those columns; as the selection committee dryly put it, his writing was "credited with compelling the Carter Administration to rethink the career of Mr. Lance." And yet the episode was revealing in another way, too. Sharp-edged in print, Safire was quite amiable in person. The writer and disgraced presidential staffer later became close friends.

Over the years, Safire devised other memorable coinages: For example, he called then-first lady Hillary Clinton "a congenital liar" for saying she had not wanted to fire members of the White House travel staff in an early flap of the Clinton presidency. And he also pursued his own fixed ideas, even when others believed they were untrue. He wrote favorably several times about the claim that a key al-Qaida plotter had met in Prague with an Iraqi intelligence official ahead of the Sept. 11, 2001, terrorist attacks. Although Bush administration officials cited it to help justify the 2003 invasion of Iraq, the Czech government said it couldn't vouch for the incident, and the 9/11 Commission concluded there was no credible evidence it occurred.

But Safire would not be defined by politics alone. Since 1979, he wrote a weekly language column for the Sunday Times magazine section, and he also wrote historical novels, spy thrillers and political dictionaries.

It was all part of his lifelong drive to explore language and meaning. Safire once told NPR that political rhetoric sought out "word pictures."

"For example, when somebody 'leaves under a cloud.' That's been used so often that it lost its punch," Safire said. "But when you say someone 'leaves in a hail of dead cats,' all of a sudden, that'll wake somebody up. And a vivid metaphor can make a speech, and also it can make a charge."

He is survived by his wife, the former Helene Belmar Julius, a model, pianist and jewelry designer; their two children, Mark and Annabel; and a granddaughter.