Accessibility links
Career Changers Find Way Around The Classroom Until a year ago, Beverly Harvey was more familiar with balance sheets than attendance sheets. Harvey had spent 25 years in the banking industry before switching careers and becoming an elementary-school teacher.

Until a year ago, Beverly Harvey was more familiar with balance sheets than attendance sheets. Harvey had spent 25 years in the banking industry before switching careers and becoming an elementary-school teacher. 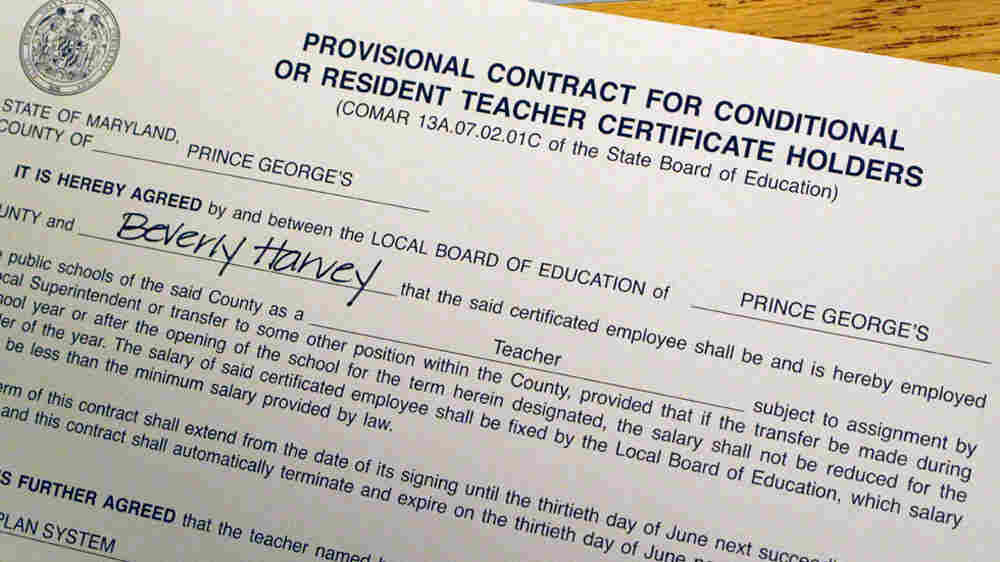 When banker turned teacher Beverly Harvey signed her contract with Prince George's County School District, she was thrilled. "This day has finally arrived. This is it!" Harvey said as she signed it. Larry Abramson/NPR hide caption

Every year, schools in the U.S. hire a quarter of a million new teachers. Desperate to boost the number of top-quality educators, school districts are luring people from other professions. 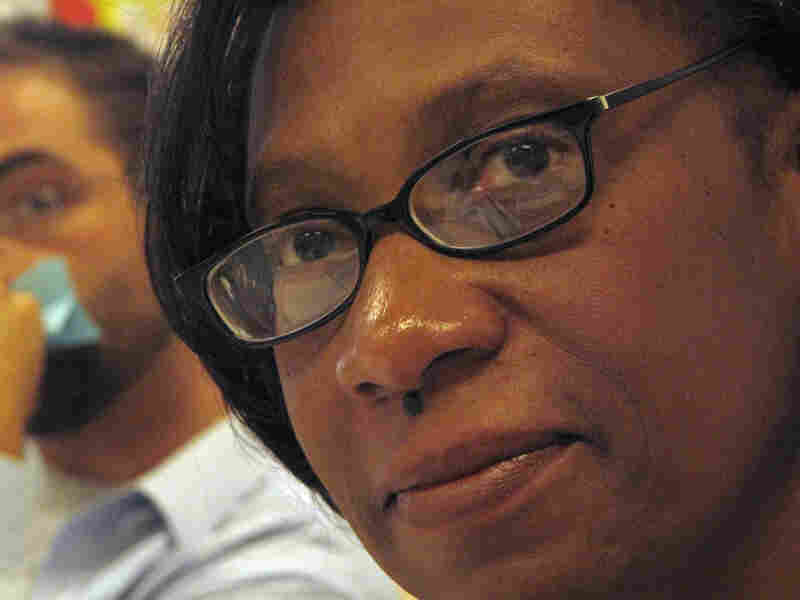 Beverly Harvey, a former vice president at Citigroup, trained for her new career during a crash course in teaching. Though she had worked in the banking industry for 25 years, she was required to take math classes as part of her preparation. Larry Abramson/NPR hide caption 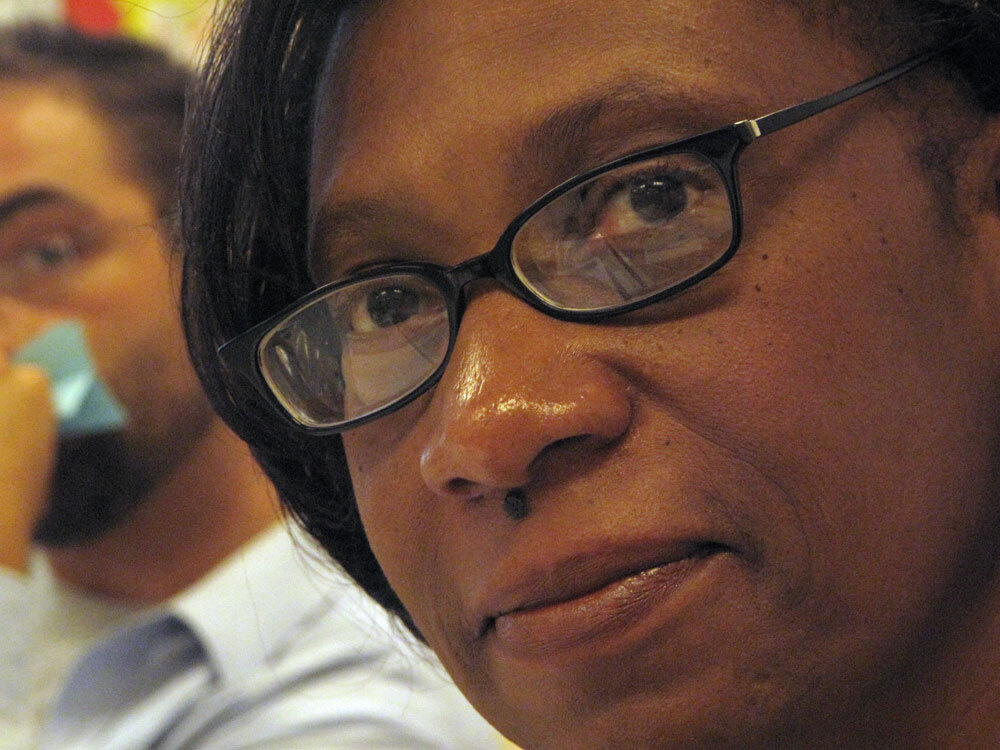 Beverly Harvey, a former vice president at Citigroup, trained for her new career during a crash course in teaching. Though she had worked in the banking industry for 25 years, she was required to take math classes as part of her preparation.

Harvey, a former vice president at Citigroup, had been attracted to teaching all her life. She left the company in 2007 after 25 years and decided to make the career switch. And after finishing a teacher training program last summer, she is now settling into a classroom full of 33 first-graders at Oakcrest Elementary School in Landover, Md.

Except for Harvey, most of her fellow students are only a few years out of college.

The questions that Harvey and the others ask their instructors seem trivial, but for teachers about to face a room full of children, nothing is too small.

"How often do you let them go to the water fountain and do you have any special procedure?" Harvey asks.

Number of Teachers Certified Through Alternative Routes, By Year

About 62,000 new teachers were certified to teach via nontraditional "alternative" routes in the 2007-2008 school year, accounting for a third of new teachers hired. That's nearly double the number of five years ago.

Classroom management of young students is a key focus of this training program, and it's something this group is anxious about. They will all be working with kids in the early grades, children who have yet to develop any of the skills and habits they need to succeed in school.

Harvey is the second-youngest of seven kids. She grew up in the South, raised by a mother who cleaned houses and a father who could not read or write. Her parents wanted her to do better.

Today, she is still inspired by teachers who insisted that she try harder.

Harvey is exactly the kind of person the Prince George's County teaching fellowship is designed for. She's an experienced professional with proven leadership skills who didn't want to go through a traditional teachers' college program.

After the crash course and some practice teaching, Harvey was thrown into the classroom in late August.

Experience, it turns out, is a harsh teacher.

A Teacher In The Making

Harvey has been handed 33 squirming, fidgeting first-graders at Oakcrest Elementary School. Harvey's principal has told her this class will eventually be cut, but in the meantime, her hands are full.

Constant noise interrupts everything she does. Harvey interrupts a story she's reading and lets loose a stern admonition — "No talking!" — but she has trouble getting the students to focus.

She also tries a little physical activity to help them burn off a little energy. She tells them all to get up — "Hop on one foot!" — but this just gets them all riled up. 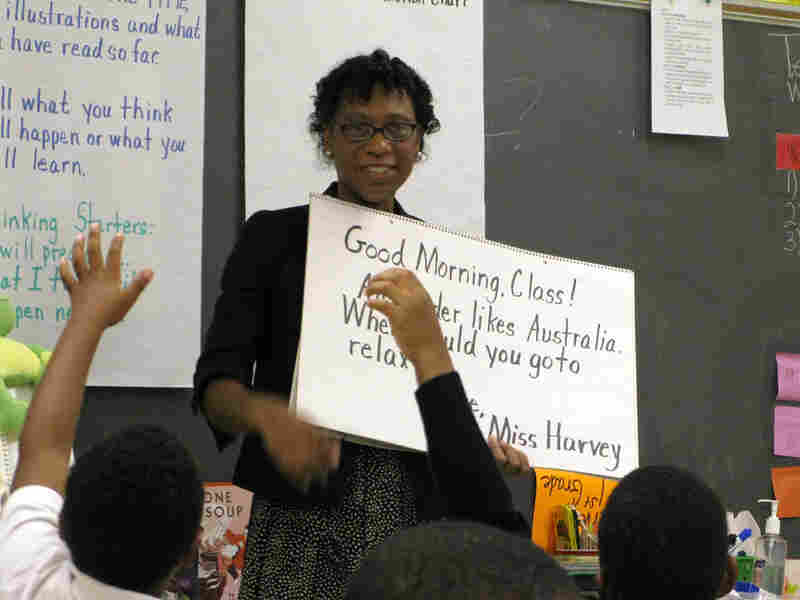 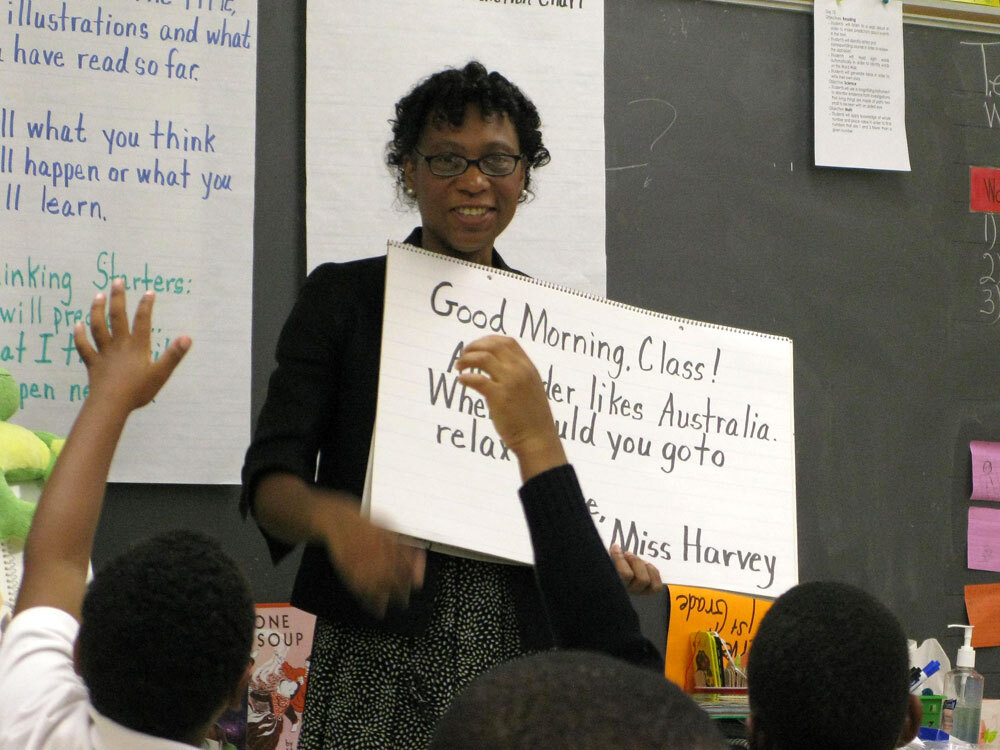 Harvey has a rescuer of sorts. Patricia Williams, Harvey's mentor, shows up. Williams has 10 years of experience and helps her manage the classroom.

In the classroom, Williams has a presence and a confidence as well as an effective superpower: a stare so penetrating that it might make adults want to fold their hands and hush up.

When asked how you teach someone to do that, she laughs.

"I don't know! You give them the look, and they know to stop," she says.

While the students are at lunch, peace has returned, giving Williams and Harvey time for a little debriefing session.

Harvey says she feels she is getting the hang of this.

"I like the fact that they pretty much know their morning routine," Harvey says. But she continues to struggle with the size of the class. No sooner has she dealt with one student than she has to rush over to deal with another — and then another.

Harvey and Williams try to figure out how to keep this large class occupied. Williams has a satchel full of activities, chants and songs to grab kids' attention.

Williams warns Harvey that kids will get tired of any activity so she will have to keep inventing new ones all year long.

Harvey is finding that keeping up with these kids is exhausting.

Sometimes when she's running low on energy, Harvey renews her dedication by thinking of her illiterate father.

"Can't let what happened to him happen to them. It's more challenging than I thought," Harvey says.

Back in class, Harvey savors a moment of calm. She reads a story, Alexander and the Terrible, Horrible, No Good, Very Bad Day.

For a few minutes, students are listening and reading along.

Harvey has a long way to go before she figures out how to make this happen more regularly.

That won't be easy. A month into the school year, and Harvey's principal still has not reduced the size of her classroom. She's still got her hands full with 33 students.