Accessibility links
Madeleine Albright's Jewelry-Box Diplomacy In her new book, Read My Pins, the former secretary of state reveals how she used jewelry as a diplomatic tool during her years with the Clinton administration. 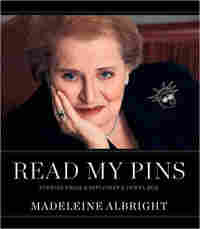 In her new book, Read My Pins, former Secretary of State Madeleine Albright reveals that she used jewelry as a diplomatic tool during her years with the Clinton administration.

"This all started when I was ambassador at the U.N. and Saddam Hussein called me a serpent," she tells Susan Stamberg. "I had this wonderful antique snake pin. So when we were dealing with Iraq, I wore the snake pin."

After that incident, Albright decided that it might be fun to speak through her pins. She went out and bought different costume jewelry.

"As it turned out, there were just a lot of occasions to either commemorate a particular event or to signal how I felt," she says.

There were balloons, butterflies and flowers to signify optimism and, when diplomatic talks were going slowly, crabs and turtles to indicate frustration.

After the Russians were caught tapping the State Department, Albright protested by wearing a pin with a giant bug on it. On days when Albright felt she had to do "a little stinging and deliver a tough message," she wore a wasp pin.

At one point, Russian leader Vladimir Putin told President Clinton that he knew what the mood of a meeting would be by looking at Albright's left shoulder. (Albright's pin with three monkeys, which she wore when discussing Chechnya, was meant to draw attention to the fact that Russia took a "hear no evil, see no evil, speak no evil" stance toward the Chechen atrocities.)

The former secretary of state says that one of her own pins — an antique eagle pin with a complicated clasp — nearly sabotaged her at her swearing-in ceremony.

"I put it on, and there I was all of the sudden with one hand on the Bible and one hand in the air, and the pin was just swinging in the breeze. I had not fastened it properly," says Albright. "I was afraid that it would fall on the Bible."

Accidents aside, Albright says she loved expressing herself with her jewels. And, she adds, making fashion statements — and commenting on each other's attire — is not completely unheard of within a diplomatic setting:

"You think that the heads of state only have serious conversations, [but] they actually often begin really with the weather or, 'I really like your tie.' "

The idea of using pins as a diplomatic tool is not found in any State Department manual or in any text chronicling American foreign policy. The truth is that it would never have happened if not for Saddam Hussein.

During President Bill Clinton's first term (1993 1997), I served as America's ambassador to the United Nations. This was the period following the first Persian Gulf War, when a U.S.-led coalition rolled back Iraq's invasion of neighboring Kuwait. As part of the settlement, Iraq was required to accept UN inspections and to provide full disclosure about its nuclear, chemical, and biological weapons programs.

When Saddam Hussein refused to comply, I had the temerity to criticize him. The government-controlled Iraqi press responded by publishing a poem entitled "To Madeleine Albright, Without Greetings." The author, in the opening verse, establishes the mood: "Albright, Albright, all right, all right, you are the worst in this night." He then conjures up an arresting visual image: "Albright, no one can block the road to Jerusalem with a frigate, a ghost, or an elephant." Now thoroughly warmed up, the poet refers to me as an "unmatched clamor-maker" and an "unparalleled serpent."

In October 1994, soon after the poem was published, I was scheduled to meet with Iraqi officials. What to wear?

Years earlier, I had purchased a pin in the image of a serpent. I'm not sure why, because I loathe snakes. I shudder when I see one slithering through the grass on my farm in Virginia. Still, when I came across the serpent pin in a favorite shop in Washington, D.C., I couldn't resist. It's a small piece, showing the reptile coiled around a branch, a tiny diamond hanging from its mouth.

While preparing to meet the Iraqis, I remembered the pin and decided to wear it. I didn't consider the gesture a big deal and doubted that the Iraqis even made the connection. However, upon leaving the meeting, I encountered a member of the UN press corps who was familiar with the poem; she asked why I had chosen to wear that particular pin. As the television cameras zoomed in on the brooch, I smiled and said that it was just my way of sending a message.

A second pin, this of a blue bird, reinforced my approach. As with the snake pin, I had purchased it because of its intrinsic appeal, without any extraordinary use in mind. Until the twenty-fourth of February 1996, I wore the pin with the bird's head soaring upward. On the afternoon of that tragic day, Cuban fighter pilots shot down two unarmed civilian aircraft over international waters between Cuba and Florida. Three American citizens and one legal resident were killed. The Cubans knew they were attacking civilian planes yet gave no warning, and in the official transcripts they boasted about destroying the cojones of their victims.

At a press conference, I denounced both the crime and the perpetrators. I was especially angered by the macho celebration at the time of the killings. "This is not cojones," I said, "it is cowardice." To illustrate my feelings, I wore the bird pin with its head pointing down, in mourning for the free-spirited Cuban-American fliers. Because my comment departed from the niceties of normal diplomatic discourse, it caused an uproar in New York and Washington; for the same reason, it was welcomed in Miami. As a rule, I prefer polite talk, but there are moments when only plain speaking will do.

This excerpt from Read My Pins by Madeleine Albridght is used by permission of Harper Collins. 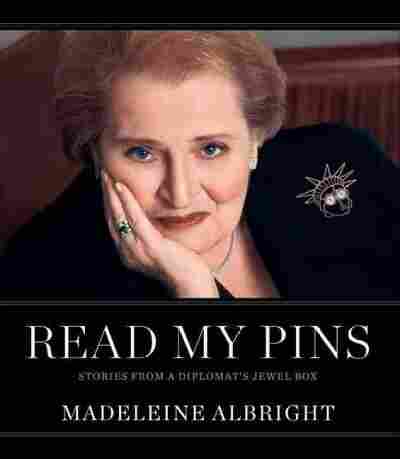 Stories from a Diplomat's Jewel Box