Accessibility links
Movie Review - A Serious Man - Cold Comfort, Coen Bros.-Style Life is hard — especially for well-meaning physics professor Larry Gopnik, whose marriage and career both hit the skids in the Coen brothers' new film, A Serious Man. But as the filmmakers have proved repeatedly, the line between tragedy and comedy can be vanishingly small. 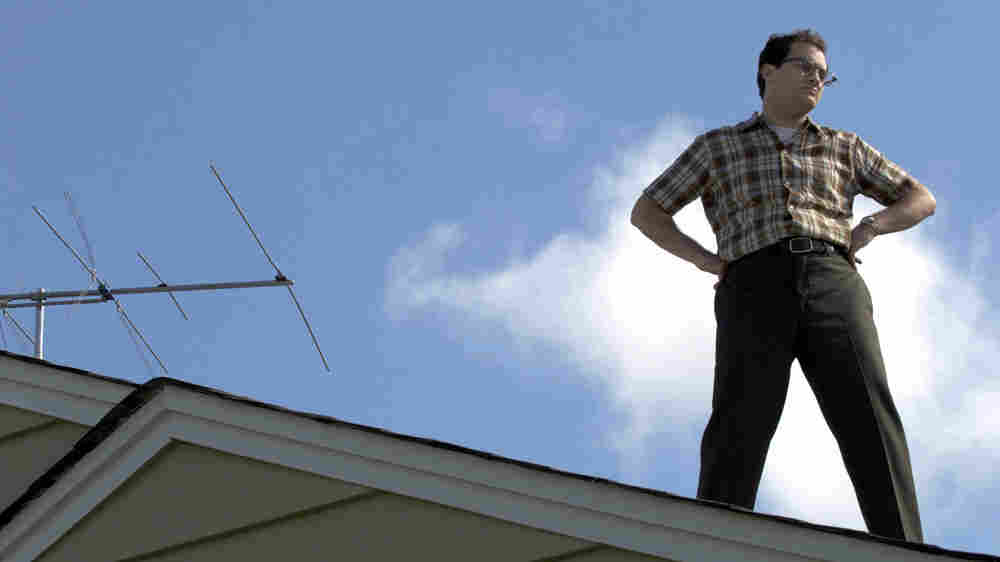 The Sky Is Falling: With his world crashing down around him, physics professor Larry Gopnik (Michael Stuhlbarg) looks for a new perspective. Wilson Webb/Focus Features hide caption

Rated R for language, brief nudity and sad revelations about the futility of existence

Set in 1967, in a Jewish community in suburban Minneapolis, A Serious Man unspools in a time and place that closely echoes the Coen brothers' own background — but the latest film from the creators of No Country for Old Men is hardly an exercise in saccharine nostalgia. It's a memory piece re-imagined through the darkest possible lens.

The serious man in question is Larry Gopnik (Michael Stuhlbarg), a university professor who has always tried to be the best person he can be. So he's totally unprepared when every aspect of his life begins to collapse — starting when his wife leaves him for a pompous colleague of Larry's named Sy Ableman (Fred Melamed).

(To keep things "on an even keel" for their soon-to-be-bar-mitzvahed son, says the missus, "Sy and I think it's best if you move out of the house.")

At the university, Larry is anonymously accused of moral turpitude. His possibly anti-Semitic neighbor is encroaching on his property line. And don't even ask about Larry's strange brother Arthur (Richard Kind). It's no wonder the man becomes desperate for rabbinic advice — and even in that pursuit, he keeps running into hurdles.

On one level — actually, on many levels — A Serious Man is not exactly a happy story. The Coens' trademark line-blurring between the serious and the comic has never been as artfully deployed as it is here. The more Larry Gopnik suffers his Job-like torments, the more he deals with the absurd and hostile Coen universe, the more we're encouraged to wonder: Isn't this just the tiniest bit funny? And the more real the pain becomes, the more laughter becomes our only possible option.

While A Serious Man is rife with specific Jewish references, it's impossible to watch Larry Gopnik's travails without feeling that they will speak to anyone who has been blindsided by life's tormenting crises.

By being so site-specific, in fact, the Coens have broadened their reach and expanded their touch. Gopnik laments more than once, "I've tried to be a serious man; I've tried to do right." Haven't we all, this haunting film says — haven't we all?