Accessibility links
Poll: Public Says Voice Not Heard In Health Debate A new poll by NPR, the Kaiser Family Foundation and the Harvard school of Public Health says while lawmakers bicker and deal, the public feels largely shut out. Despite public support, the Senate Finance Committee voted down the public option Tuesday. 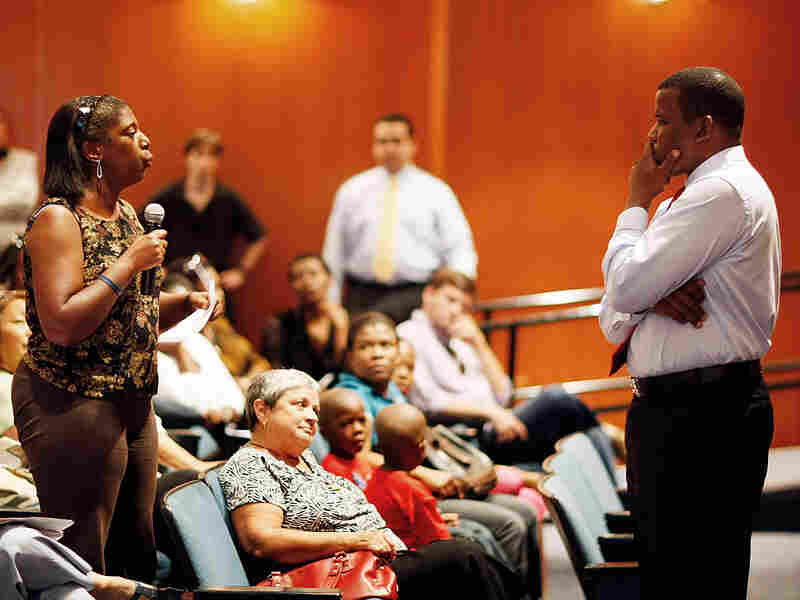 Poll Question: Who Is Congress Listening To?

Read the full results of the poll by NPR, the Kaiser Family Foundation and the Harvard School of Public Health:

See A Summary of Results, Charts
See The Full Results

Perhaps no other issue Congress deals with touches every American as intimately as health care. Yet a new poll by NPR, the Kaiser Family Foundation, and the Harvard School of Public Health finds that, so far, the public feels profoundly shut out of the current health overhaul debate.

"Most people don't feel that they personally have a voice in this debate," said Mollyann Brodie, director of public opinion and survey research for the Kaiser Family Foundation. "In fact, 71 percent told us that Congress was paying too little attention to what people like them were saying."

Nancy Turtenwald is one of those people. The tourist from Milwaukee was walking around the sparkling new visitor center at the U.S. Capitol Tuesday. She was quick to agree with poll findings that the lawmakers debating the massive health overhaul bill just a few blocks away weren't much interested in problems like hers.

"I don't think they are people like us, you know?" she said. She thinks Congressional lawmakers know very little about the daily lives of the average American — and the health care costs they face. "How often do they go and buy gas and bread and stuff to see what it's really like for the people like us?"

So who does Turtenwald think Congress is listening to? "Lobbyists, and people who will get them reelected."

Still, according to the poll, the public is nearly evenly split about whether interest groups are a good or bad thing when it comes to health care.

Just over half — 51 percent — agree with the poll question "health care interest groups will play an important role in carrying out changes to the health care system, so it's important to have them on board with the legislation."

A somewhat smaller, but still substantial group (39 percent) agree, however, that "Congress should design the best health care legislation it can and not worry if health care interest groups support it or not."

And who does the public trust when it comes to health care interest groups?

Nurses got the highest vote of confidence, with 79 percent of those polled saying they have at least a fair amount of confidence that groups representing nurses would "recommend the right thing for the country when it comes to health care." Groups representing patients, doctors and seniors were next on the list.

Groups trusted the least were those representing insurance companies, drugmakers and large corporations.

Insurance companies and drugmakers were also among those respondents said were most responsible for the current problems facing health care. But so was the federal government.

That presents no small obstacle for lawmakers. "Half the public says that the federal government bears a lot of the responsibility for the problems that we face in our health care system," said Mollyann Brodie of the Kaiser Family Foundation. "So you know, certainly there is a challenge as the federal government is trying to address these problems, as they are also seen as one of the pieces of the challenge to start with."

Another challenge, says Bob Blendon of the Harvard School of Public Health, is who the public does not blame — doctors, hospitals and patients themselves. Many experts say those are the groups most guilty of overusing the health care system. Thus, they are also the groups whose behavior is most targeted for change in the pending health care bills.

Yet "people are not focused on, 'Is something wrong with the delivery system?'" Blendon said. According to the poll, the public is focused on the insurance and pharmaceutical industry. And they very much think government is part of the problem.