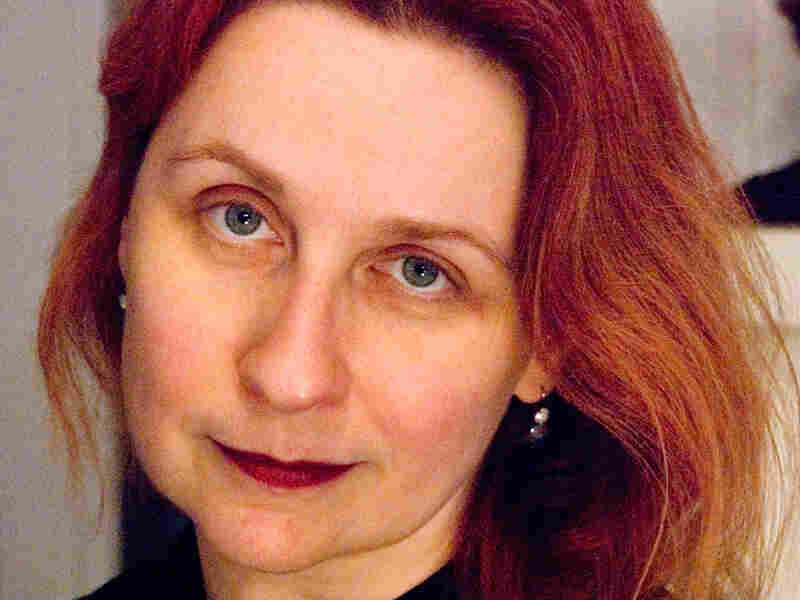 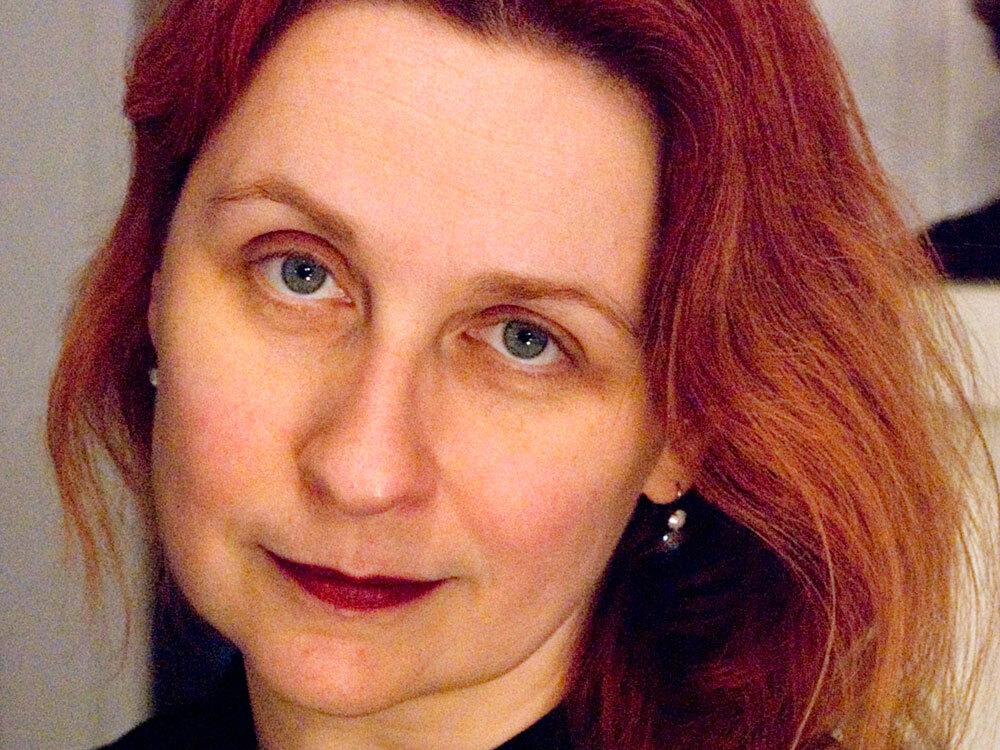 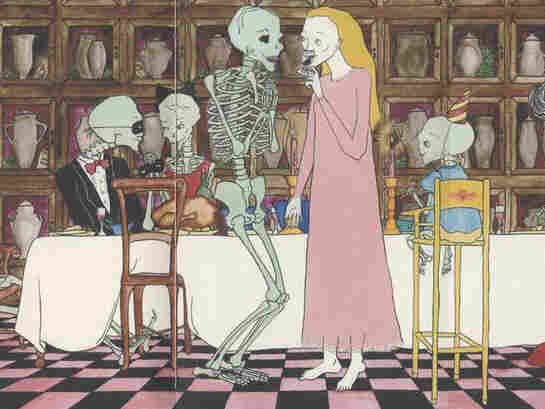 Niffenegger's artwork reveals her playful fascination with death and dying. Courtesy of the artist and Sherwin Beach Press hide caption

toggle caption
Courtesy of the artist and Sherwin Beach Press 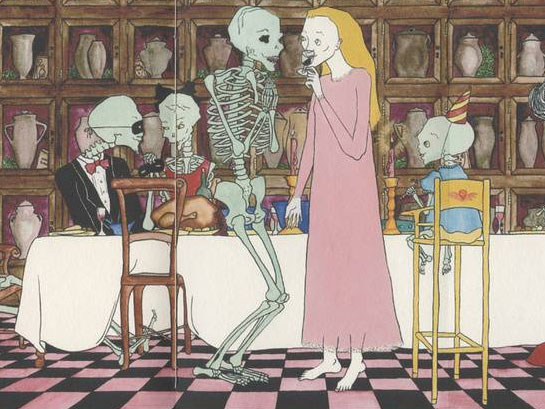 Niffenegger's artwork reveals her playful fascination with death and dying.

Courtesy of the artist and Sherwin Beach Press 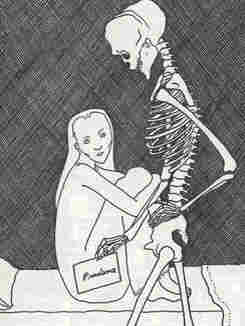 toggle caption
Courtesy of the artist and Sherwin Beach Press

Though she may be best known for her fictional take on chronological displacement, Audrey Niffenegger, author of The Time Traveler's Wife, tells Melissa Block that she's also attracted to themes of death and dying.

"I think I must have sprung from the womb looking at the other end of my life," Niffenegger says. "Living in America, one tends not to be very death-focused — we're such an optimistic, death-avoiding society. But all the art I was attracted to when I was young seemed to be, if not macabre, then involving loss in some way."

Niffenegger explores some of those darker themes in her new book Her Fearful Symmetry, which features identical twin sisters from America who inherit their aunt's apartment in London. Though the aunt dies in the novel's first line, the author says she wanted to hold onto the character — so she turned her into a ghost.

"The more I thought about their aunt, Elspeth, the more interested I got in her, and the more I wanted to write about her. And I felt very, very sorry that I had killed her before she even got into the story," Niffenegger says.

While Niffenegger recognizes that the setup of her novel may be cliched, she says it is intentionally so: "One of the things I'm doing in this book is taking all the old cliches and the workings of the 19th-century English novel and trying to use them in a 21st century novel in a way that makes sense."

London's famous Highgate Cemetery, where Elspeth's lover works as a scholar and where Elspeth herself is buried, also features prominently in the novel. It's a place that Niffenegger got to know so well while writing that the staff suggested she start giving cemetery tours — which she did.

Death doesn't just figure prominently in Niffenegger's new novel; it's also a common theme of her artwork. In the drawings, paintings and prints she displays on her Web site, skeletons share a meal at a communal table and canoodle with the living.

"Violence does not attract me, nor do I try to aestheticize it. ... [But] death, on the other hand, is something that will happen to everybody, and it does seem important to think about it," Niffenegger explains.

Niffenegger acknowledges that some readers who know her from The Time Traveler's Wife may be startled by her latest effort: "This book is more astringent and less of a full-blown romantic odyssey."

"[But] I tried in this book not to be relentless," she adds. "There's humor in this book, and there are open spaces where I'm not necessarily determining something, where it's possible for a reader to make choices about what's happening and what the readers are going to be doing." 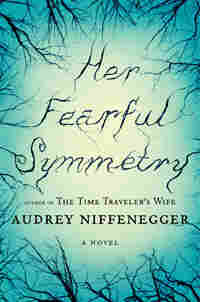 The letters arrived every two weeks. They did not come to the house. Every second Thursday, Edwina Noblin Poole drove six miles to the Highland Park Post Office, two towns away from her home in Lake Forest. She had a PO box there, a small one. There was never more than one letter in it.

Usually she took the letter to Starbucks and read it while drinking a venti decaf soy latte. She sat in a corner with her back to the wall. Sometimes, if she was in a hurry, Edie read the letter in her car. After she read it she drove to the parking lot behind the hotdog stand on 2nd Street, parked next to the Dumpster and set the letter on fire. "Why do you have a cigarette lighter in your glove compartment?" her husband, Jack, asked her. "I'm bored with knitting. I've taken up arson," Edie had replied. He'd let it drop.

Jack knew this much about the letters because he paid a detective to follow his wife. The detective had reported no meetings, phone calls or email; no suspicious activity at all, except the letters. The detective did not report that Edie had taken to staring at him as she burned the letters, then grinding the ashes into the pavement with her shoe. Once she'd given him the Nazi salute. He had begun to dread following her.

There was something about Edwina Poole that disturbed the detective; she was not like his other subjects. Jack had emphasised that he was not gathering evidence for a divorce. "I just want to know what she does," he said. "Something is...different." Edie usually ignored the detective. She said nothing to Jack. She put up with it, knowing that the overweight, shiny-faced man had no way of finding her out.

The last letter arrived at the beginning of December. Edie retrieved it from the post office and drove to the beach in Lake Forest. She parked in the spot farthest from the road. It was a windy, bitterly cold day. There was no snow on the sand. Lake Michigan was brown; little waves lapped the edges of the rocks. All the rocks had been carefully arranged to prevent erosion; the beach resembled a stage set. The parking lot was deserted except for Edie's Honda Accord. She kept the motor running. The detective hung back, then sighed and pulled into a spot at the opposite end of the parking lot.

Edie glanced at him. Must I have an audience for this? She sat looking at the lake for a while. I could burn it without reading it. She thought about what her life might have been like if she had stayed in London; she could have let Jack go back to America without her. An intense longing for her twin overcame her, and she took the envelope out of her purse, slid her finger under the flap and unfolded the letter.

Dearest e,
I told you I would let you know — so here it is — goodbye.
I try to imagine what it would feel like if it was you — but it's impossible to conjure the world without you, even though we've been apart so long.
I didn't leave you anything. You got to live my life. That's enough. Instead I'm experimenting — I've left the whole lot to the twins. I hope they'll enjoy it.
Don't worry, it will be okay.
Say goodbye to Jack for me.
Love, despite everything,
e

Edie sat with her head lowered, waiting for tears. None came, and she was grateful; she didn't want to cry in front of the detective. She checked the postmark. The letter had been mailed four days ago. She wondered who had posted it. A nurse, perhaps.

She put the letter into her purse. There was no need to burn it now. She would keep it for a little while. Maybe she would just keep it. She pulled out of the parking lot. As she passed the detective, she gave him the finger.

Driving the short distance from the beach to her house, Edie thought of her daughters. Disastrous scenarios flitted through Edie's mind. By the time she got home she was determined to stop her sister's estate from passing to Julia and Valentina.

Jack came home from work and found Edie curled up on their bed with the lights off.

"Elspeth died," she told him.

She handed him the letter. He read it and felt nothing but relief. That's all, he thought. It was only Elspeth all along. He climbed onto his side of the bed and Edie rearranged herself around him. Jack said, "I'm sorry, baby," and then they said nothing. In the weeks and months to come, Jack would regret this; Edie would not talk about her twin, would not answer questions, would not speculate about what Elspeth might have bequeathed to their daughters, would not say how she felt or let him even mention Elspeth. Jack wondered, later, if Edie would have talked to him that afternoon, if he had asked her. If he'd told her what he knew, would she have shut him out? It hung between them, afterwards.

But now they lay together on their bed. Edie put her head on Jack's chest and listened to his heart beating. "Don't worry, it will be okay."...I don't think I can do this. I thought I would see you again. Why didn't I go to you? Why did you tell me not to come? How did we let this happen? Jack put his arms around her. Was it worth it? Edie could not speak.

They heard the twins come in the front door. Edie disentangled herself, stood up. She had not been crying, but she went to the bathroom and washed her face anyway. "Not a word," she said to Jack as she combed her hair.

"Okay." Their eyes met in the dresser mirror. She went out, and he heard her say, "How was school?" in a perfectly normal voice. Julia said, "Useless." Valentina said, "You haven't started dinner?" and Edie replied, "I thought we might go to Southgate for pizza." Jack sat on the bed feeling heavy and tired. As usual, he wasn't sure what was what, but at least he knew what he was having for dinner. 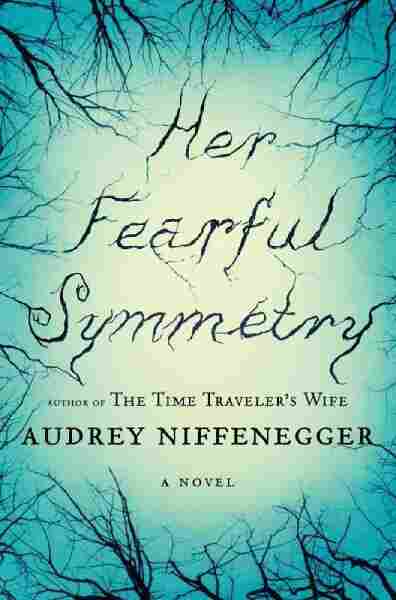