Accessibility links
In Europe, A Cow Over Hormone-Treated U.S. Beef Europeans accustomed to grass-fed beef don't understand why Americans are willing to eat beef pumped up with synthetic hormones. A French farmer says the two cattle industries are run differently: One focuses on profit and the other on quality. 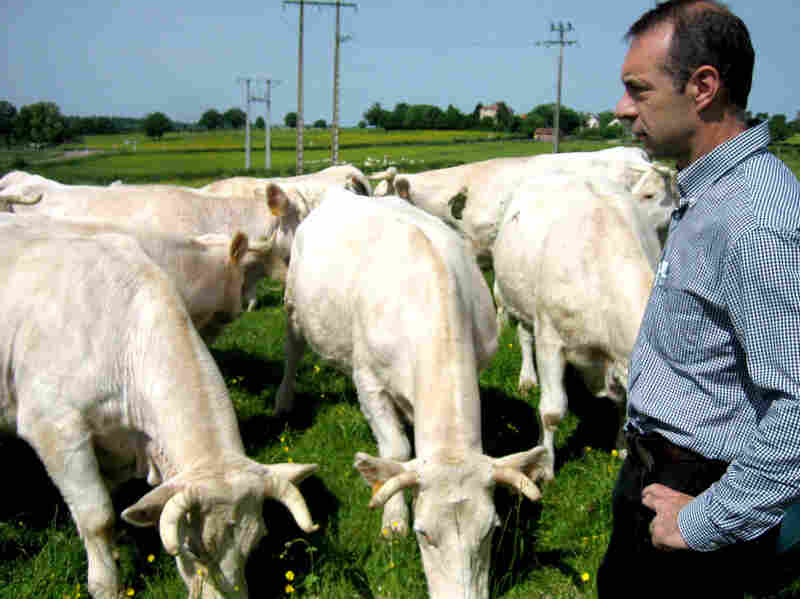 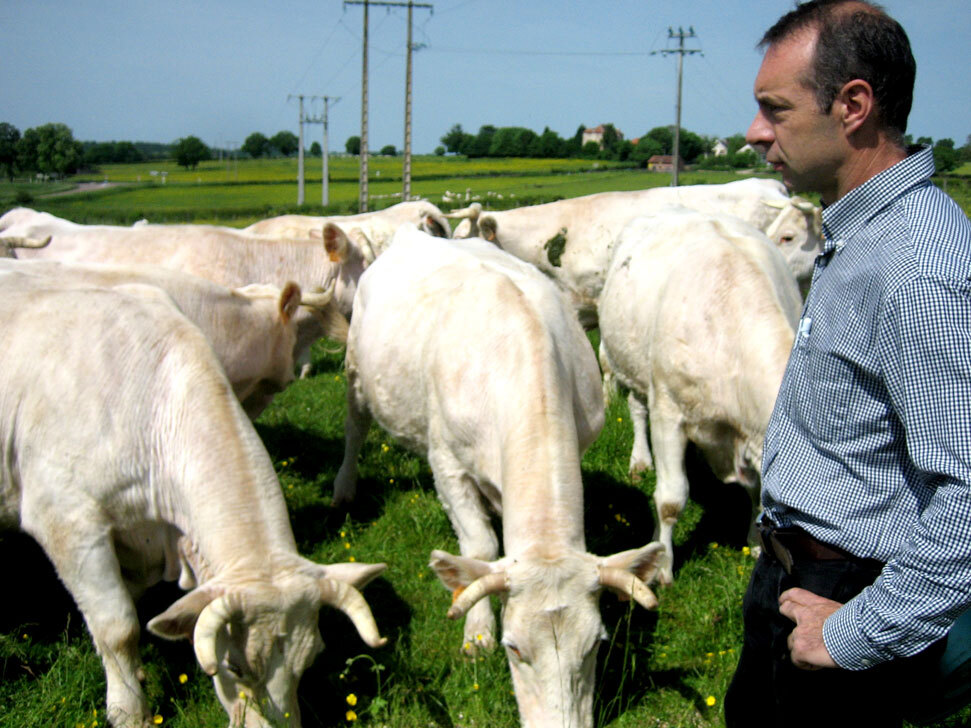 Michel Baudot, who raises cattle in France's Burgundy region, says the cattle industries of the U.S. and the EU are two different beasts. He says U.S. producers look more to profit than quality.

The U.S. and the European Union recently settled one of their longest-running trade disputes: over beef. Under the deal, the EU agreed to quadruple import quotas for hormone-free U.S. beef, but it still won't import hormone-treated American beef, because many Europeans consider it unhealthy.

Farmer Michel Baudot, who raises cattle in France's Burgundy region, says the two cattle industries are run differently: One focuses on profit and the other on quality.

For seven generations, his family has bread the stocky white Charolais cows indigenous to the area.

In the summer, his herd of 600 cattle grazes freely on his 1,500-acre farm. In winter, the animals are sheltered in his barn, where they eat hay and grain. They live on Baudot's farm until they are slaughtered. Every aspect of each cow's life is meticulously followed. Baudot says European consumers demand this.

"Each animal has a 'passport' where every aspect of his life is recorded: where he was born, who his parents were, what vaccines he's had," Baudot says. "And that passport follows him through his whole life."

Baudot's beef can be found in the supermarket of a small town near his farm. The cow from which the beef came can be traced because every package of meat sold in the EU must list where the animal was born, raised and slaughtered. Every cow has a different ID number, butcher Stephane Dausin says.

"Every piece of meat can be traced from A to Z — from the raiser to the consumer," Dausin says. "We have to have complete transparency, or we'd never be able to sell it."

Many shoppers here have heard that in America cows are given hormones. Nathalie Genvier, who is picking up some steaks and lamb chops, says French consumers consider meat with hormones unhealthy and possibly dangerous.

"That's why it's important to know where animals are raised, and also to know how they are treated and whether they're eating natural products," Genvier says.

Baudot also works as a consultant promoting the Charolais breed abroad. His travels take him to the world's top beef-producing countries, including the U.S. Hormones, he says, are not the only difference between American and European beef: The cattle industries are run in distinctly different ways.

"In the U.S., producers look much more to profit than quality," he says. "It's the massive industrial production of meat. So there are economies of scale, and meat is obviously cheaper.

"Here, we have much smaller, more artisanal operations. And the cuts are traditional, so our costs are higher. We also have a lot of different breeds with different shapes and sizes that aren't always convenient at the slaughterhouse. In the U.S., they seem to have produced a standardized cow."

In the U.S., the vast majority of cattle spend only their first months of life on a farm like Baudot's eating grass. From there, they are transferred, sometimes thousands of miles away, to giant feedlots where they are packed in by the tens of thousands, and fed corn and hormones. American cows wear a patch behind their ear, which releases a synthetic growth hormone. Baudot says European consumers would never accept such a system, but he understands why it is used.

"With the hormones you force nature, so you save time and earn quick muscle," he says. "I see a huge difference with our cows. In the U.S., you see cows arrive into the feedlots thin, and two months later, they're bodybuilders that have tripled in volume. So these hormones are very powerful and effective."

Baudot says he has nothing against the American cattle farming system. What is not right, he says, is having to compete internationally with a product made using methods that are outlawed in your own country. Using hormones to grow cows is kind of like doping in sports, Baudot says, and that creates an uneven playing field.