Accessibility links
Obama And Big Health: Who's Co-Opting Whom? In the still-evolving health care overhaul effort, are the doctors, pharmaceutical industry and insurers winning, by negotiating good deals for themselves? Or is this a success for the administration, because these groups are still in the game? 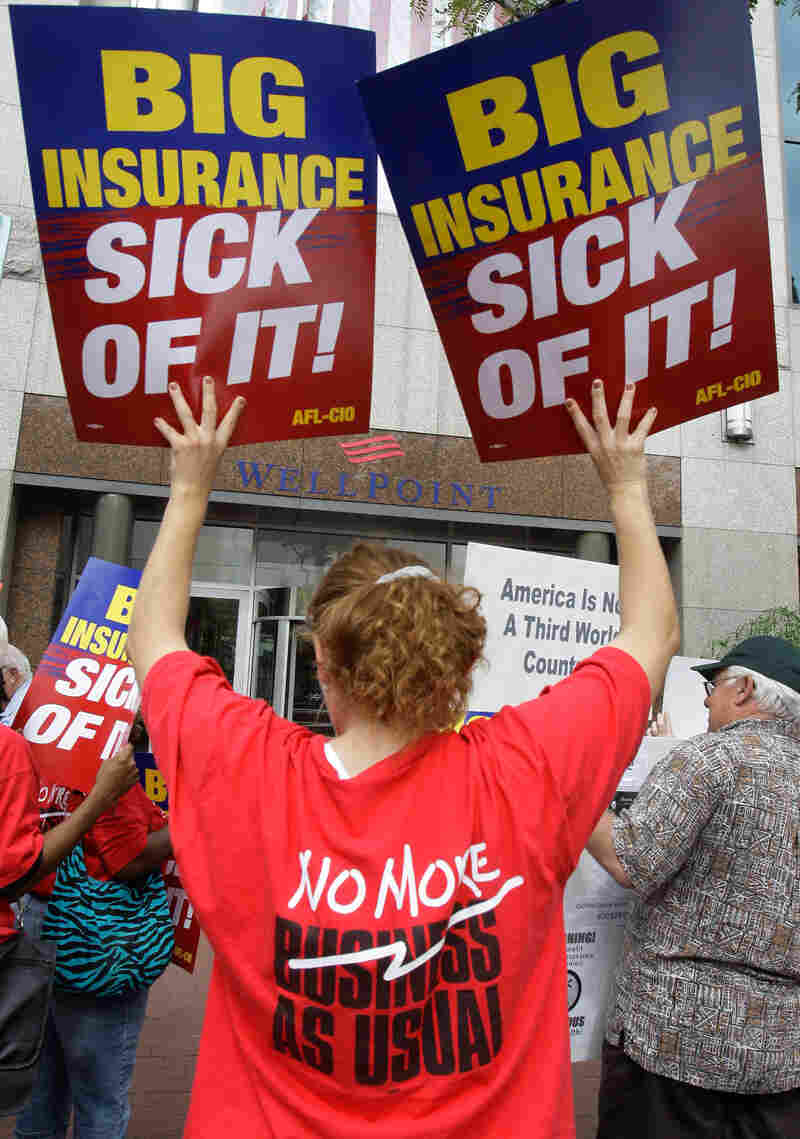 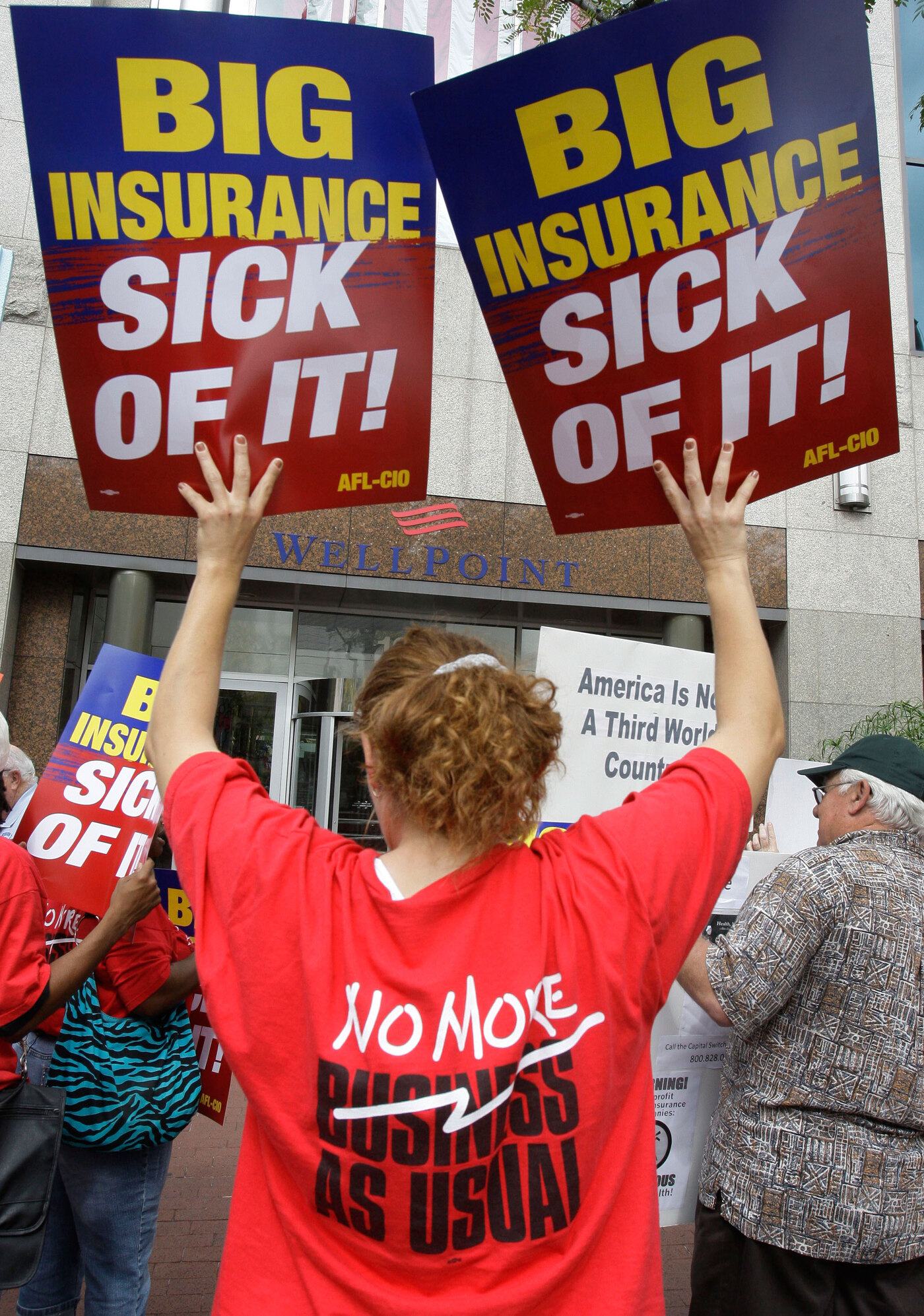 Protesters demonstrate in front of the headquarters for the private health insurer WellPoint Inc. Some believe the move to overhaul health care isn't adequately fixing problems with the insurance industry.

One of the key parts of the White House strategy to overhaul the nation's health care system was to strike deals with major interest groups.

Putting a positive spin on this collaboration, President Obama touted the support his overhaul effort was getting from a broad array of what used to be called "special interests."

"Our overall efforts have been supported by an unprecedented coalition of hospitals and seniors' groups, businesses, drug companies even," the president said earlier this month at a rally at the University of Maryland.

The work to assemble that coalition began years ago, even before Obama was elected. When consumer groups met with their erstwhile opponents — drugmakers and health insurers — they hired outside mediators to guide their discussions. The result was general agreement on the basic underpinnings of a health care overhaul: Everyone would have to be covered, a boon for insurance companies, and insurers would have to cover everyone — regardless of his or her health, a success for consumer groups.

Then, the White House made individual deals with hospitals, drugmakers and doctors. The terms were simple — the industry groups would support the broad outlines of a health care bill and the administration would agree to limit fees and budget cuts affecting these groups.

"There are going to be people, no doubt, who will say, 'Oh, you gave up too much here,' " says Rahm Emanuel, the White House chief of staff. "There's a price to that, no doubt about it. But it's better to have those constituencies — like nurses, like doctors — supporting the outcome of reforming health care than opposing you."

Administration Faces Accusations Of Selling Out

But not every Democrat is onboard. In the House, many members of the president's own party think the White House sold out — cheap — to the Pharmaceutical Research and Manufacturers of America, or PhRMA, a trade group that represents pharmaceutical research and biotechnology companies, when it agreed to accept just $80 billion in drug rebates to low-income seniors.

In the Senate Finance Committee last week, New York's Charles Schumer tried to kill the drug deal by supporting an amendment to force the pharmaceutical companies to give up even more.

"Frankly, most people would say that the so-called deal that PhRMA cut with whomever was pretty lenient," Schumer said. "Which side are you on? The senior citizen who needs help saving money ... on one side [or] PhRMA on the other?"

But the effort to kill the deal was defeated — all the Republicans voted against the amendment and so did three Democrats, including Delaware's Sen. Tom Carper.

"Whether you like PhRMA or not," Carper says, "we have a deal."

But while the president heaps praise on the drugmakers and the hospitals, he has saved some of his harshest attacks for the insurance companies — a politically unpopular interest group that didn't make a deal with the White House.

At a labor rally in Minnesota, the president made it personal. The insurance companies are raking in profits, he said, while they fight reform.

"This is when the special interests and the insurance companies and the folks who think, you know, 'This is a good way to bring Obama down,' this is when they're going to fight with everything they've got," the president said. "This is when they'll spread all kinds of wild rumors designed to scare and intimidate people."

Health insurance lobbyist Karen Ignagni is very careful when she criticizes the tone the president has taken toward her industry.

"Our members made a decision to play a 2009 game," she says. "And it's different than what we did in '93 and '94. And so I think the inconvenient fact here associated with the rhetoric, in particular, has been that our members support reform."

Unlike in 1993, the health insurance trade groups have not launched multimillion-dollar ad campaigns against health care legislation, a fact Emanuel acknowledges.

"Unlike other sectors, they haven't fully invested in the reform, but they have not been the biggest-funded opponents of health care reform, either," he says. "I wouldn't exactly call them Switzerland in this deal."

Not neutral Switzerland, maybe, but the insurers' reaction to being vilified by the president has been remarkably restrained. As one health care player said, the insurance companies will take a lot of verbal abuse in order to get 30 million new customers.

Is Compromise Keeping The Debate Alive?

That semi-neutrality only validates Emanuel's belief that the deals were the right thing to do.

"When you're trying to do something this big, it is rough having what has traditionally been opponents [as] proponents," he says.

There is a spirited debate inside the Democratic Party about who co-opted whom in the special interest health care deals. But many supporters of a health care overhaul believe that without these side agreements, the health care effort would have been mortally wounded by the town hall rebellion in August.

And the deals may be one reason that health care legislation is still slogging forward, step by difficult step.