Accessibility links
The Nation: Democrats Vote Down Public Option The health reform that is needed in the U.S. — a system that offers every American the care they need, flexibility in choices of doctors and hospitals and responsible controls on costs — has been rejected by the Obama administration and Democratic leaders in the House and Senate. 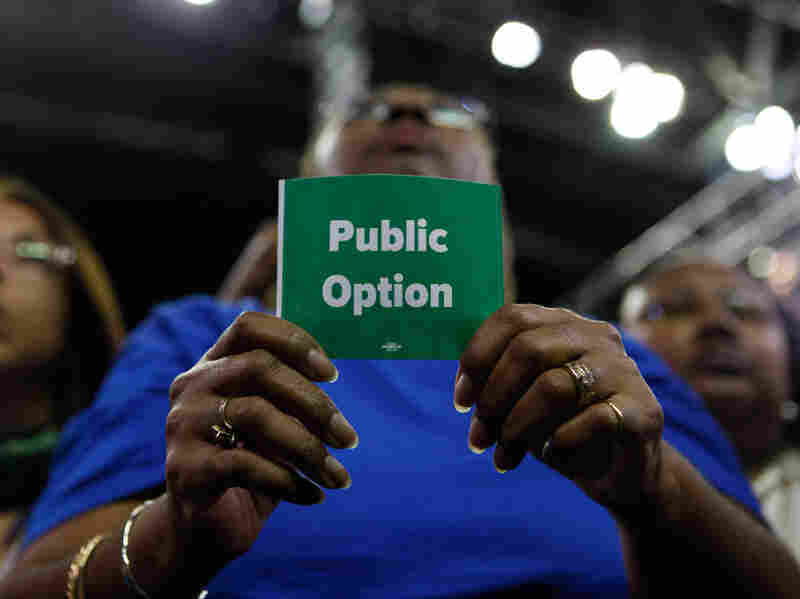 An audience member hold up a small sign with the words "Public Option" as President Barack Obama spoke at a rally on health care reform, Thursday, Sept. 17, 2009, at the University of Maryland in College Park, Md. Charles Dharapak/AP hide caption 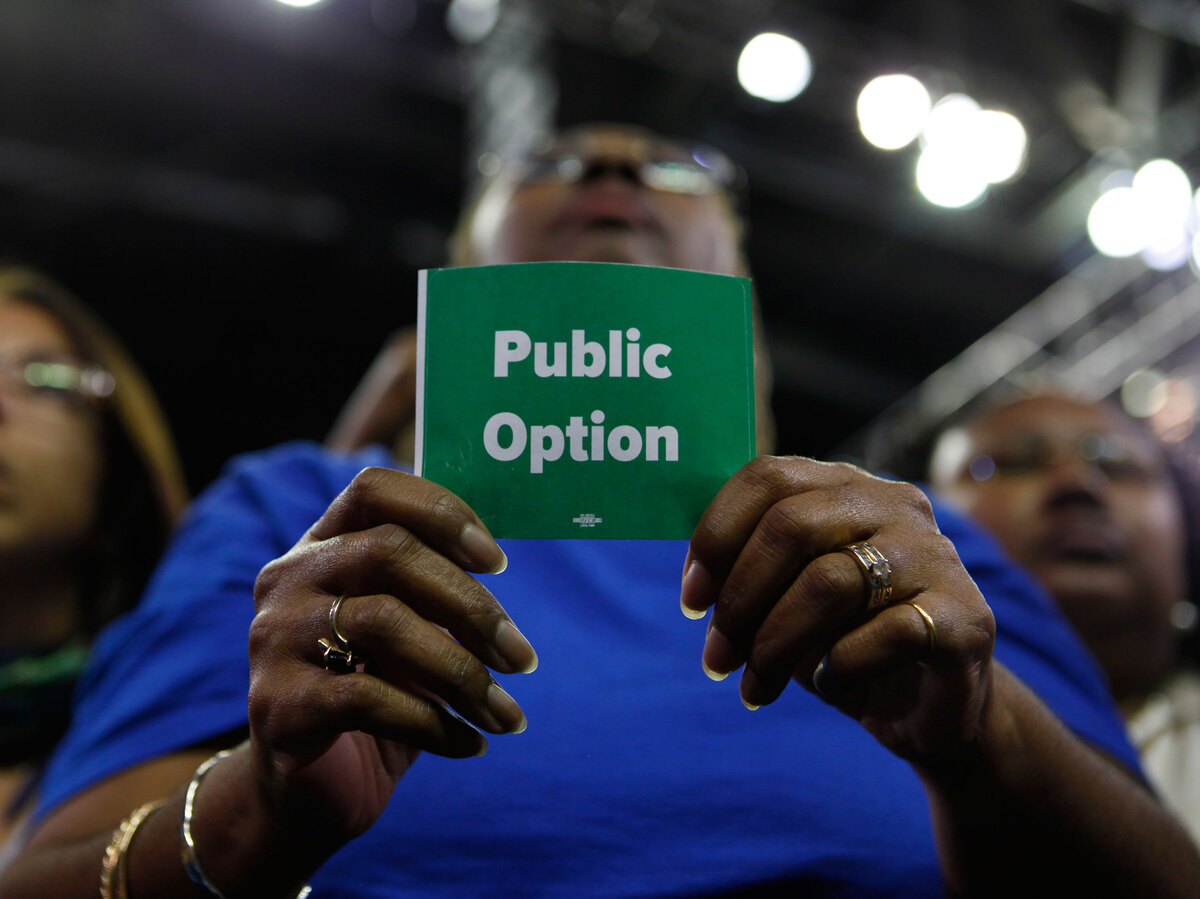 An audience member hold up a small sign with the words "Public Option" as President Barack Obama spoke at a rally on health care reform, Thursday, Sept. 17, 2009, at the University of Maryland in College Park, Md.

The healthcare reform debate such as it is has already provided more than enough disappointment for Americans who recognize the need for a thorough reordering of the way in which this nation meets the medical needs of its populace.

But the hits just keep on coming.

Indeed, there is good reason to believe the Congress is edging away from a healthcare reform debate and toward a far more limited discussion of insurance reform.

Baucus, the insurance-industry representative who doubles as a Democratic senator from Montana, long ago rejected the notion that a robust public option might be a part of any healthcare reform measure that would pass the Senate.

What was especially unsettling about the Finance Committee votes was the failure on the part of most — though not all — senators that the public option is itself a compromise.

The reform that is needed — a single-payer "Medicare for All" system that offers every American the care they need, flexibility in choices of doctors and hospitals and responsible controls on costs — has been taken "off the table" by the Obama administration and Democratic leaders in the House and Senate.

What the president and his allies initially offered serious reformers was a hamstrung variation on single-payer, in the form of a "public option" that could serve as an alternative to the offerings of the for-profit insurance companies.

The public option has always been the last line in the sand for serious reformers. Indeed, as a frustrated Wisconsin Senator Russ Feingold said Thursday: "A public health insurance option is key to ensuring every American is able to afford health insurance and without it, I don't see how we will bring real reform to the system."

Says Senator Bernie Sanders, I-Vermont: "Clearly, if we are serious about cost containment, private insurance companies must have competition from a public plan."

Now, however, as Democrats compromise away their compromise, members of the House and Senate find themselves debating variations on the public option that are so cautious and constrained that they cannot really be seen as credible "alternatives" to the private sector.

And even these, they are rejecting.

Rockefeller's muscular amendment was defeated on a vote of 15 against to 8 in favor. No Republicans backed it and five Democrats were against: Baucus, North Dakota's Kent Conrad, Arkansas' Blanche Lincoln, Florida's Bill Nelson and Delaware's Tom Carper.

Schumer's more modest proposal was defeated on a vote of 13 against and 10 in favor. Again, all Republicans were opposed, as were Democrats Baucus, Conrad, and Lincoln.

The Finance Committee session did not end the debate about the character or content of the measure that the House and Senate will consider. Rockefeller still says: "The public option is on the march."

But little about the deliberations of the finance committee suggested that the public option will ever gain Republican support. Indeed, the language of committee Republicans was vitriolic. Iowa Senator Charles Grassley, a supposed moderate within the GOP caucus, dismissed the notion that a government-backed scheme would help to level the playing field by providing an affordable and humane alternative to. "It's not a competitor, it's a predator," Grassley said of the proposals for a public option.

Utah Senator Orrin Hatch, another supposedly reasonable player inside a Republican camp that it not going out of its way to be reasonable, accused Rockefeller of proposing his amendment as "a Trojan horse" for a single-payer system. If only!

Some Democrats tried to fight back. An unusually-impassioned Rockefeller told the committee that a counterbalance to the insurance industry was needed because "they're getting away with banditry and they revel in it." Massachusetts Senator John Kerry argued, correctly, that the insurance corporations and their amen corner in the GOP caucus were blocking even a modest public option because they were frightened "that Americans might like a competitive plan that is paying for itself?"

But those arguments were not sufficient to unite the Democratic caucus. The "no" voters were generally embarrassed enough to make excuses North Dakota's Conrad highlighted flaws in the reimbursement scheme proposed by Rockefeller.

Embarrassed or not, the Democrats whose votes mattered most still voted "no."

And that's the bottom line.

Without essentially unified Democratic support for a public option especially on key committees in the Senate healthcare reform will not advance.

What we will get, at best, is insurance reform.

That's a little bit of change.

But it is not "change we can believe in" let alone change that reformers will get excited about.

Speaking of the public option-free measure that he hopes to advance, Baucus told the committee: This bill is by no means a complete rewriting of the American healthcare system.

Unfortunately, he was right.