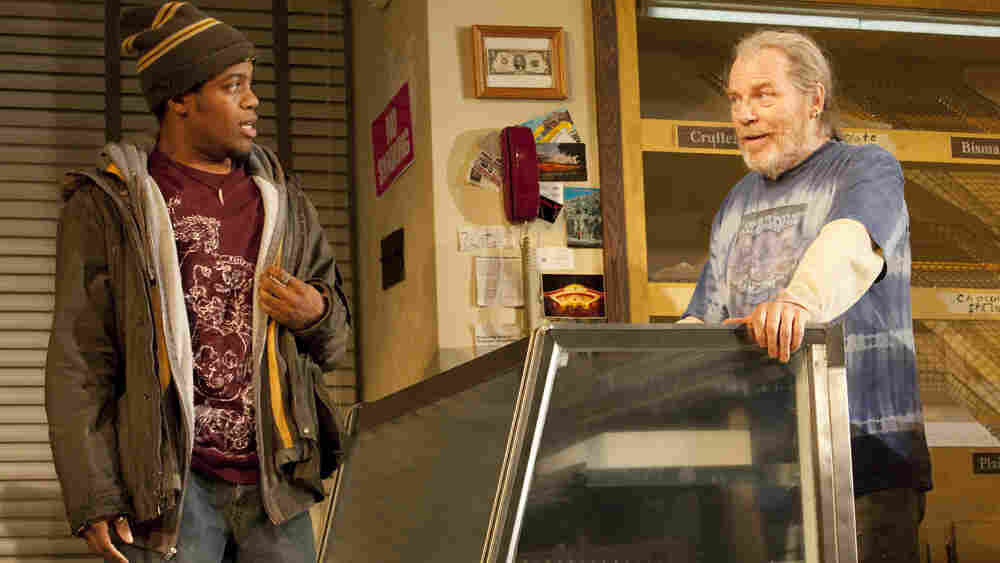 Tracy Letts' first Broadway play — the scathingly funny epic August: Osage County — was a smash hit. A three-hour yarn about an embittered, entertainingly dysfunctional Oklahoma family, it won the Pulitzer Prize and the best-play Tony Award in 2008, and it ran for a year and a half.

So how is the playwright following up? With a complete change of gears. Superior Donuts, opening Oct. 1 at the Music Box Theatre, is a gentle, intimate comedy with serious undertones, set in a Chicago doughnut shop. 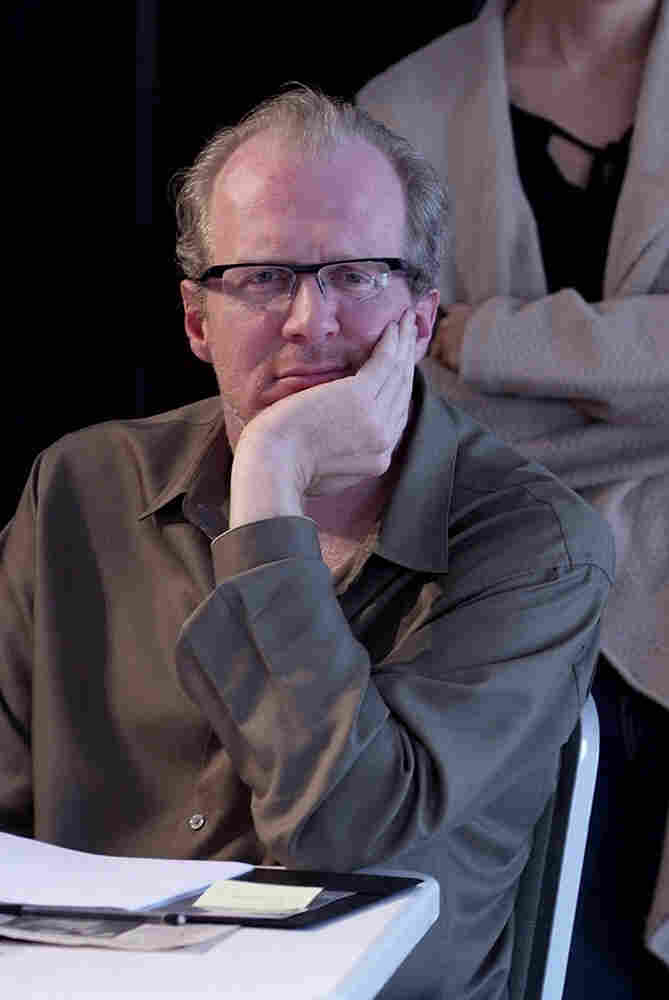 Playwright Tracy Letts says he wanted to write a play about a certain breed of reality-damaged romantics, and how they're coping decades after their early disappointments. Michael Brosilow hide caption 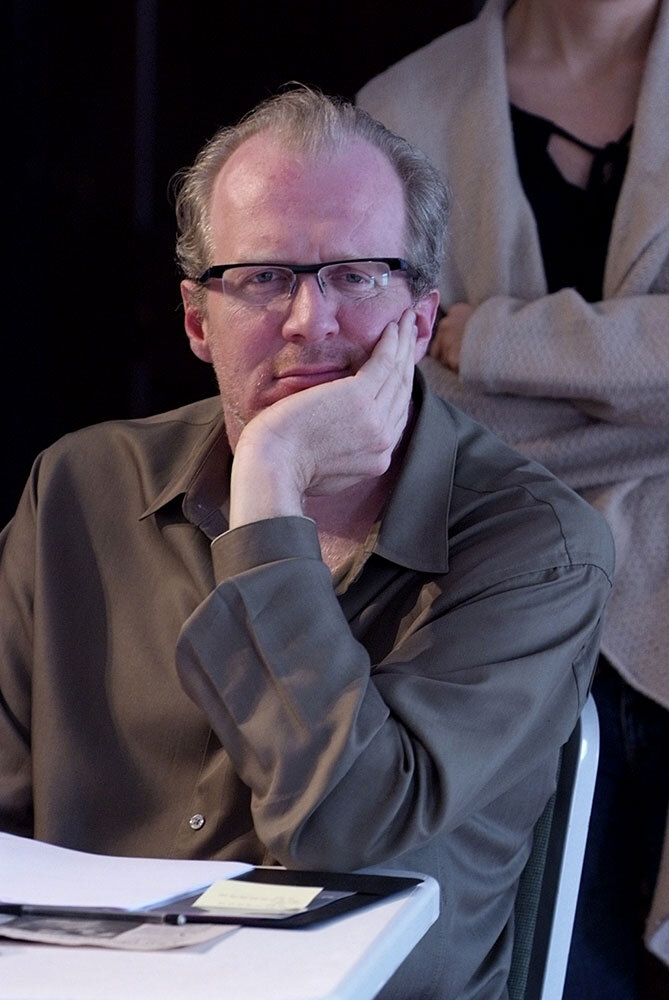 Playwright Tracy Letts says he wanted to write a play about a certain breed of reality-damaged romantics, and how they're coping decades after their early disappointments.

Why a doughnut shop? Don't ask the playwright.

"I never know where the plays start," he says. "I can never trace them back to that original kernel."

But Letts did know that he wanted to look at a certain kind of man — one who came of age during the Vietnam era.

"They were romantics, and like most romantics, reality did some damage to them," he says. "And I was curious about that generation of men, and how they were dealing with that damage now, 40 years later, as that particular class of boomers leaves middle age and enters into their old age. ... That, and I like doughnuts!"

Franco and Arthur debate shopping habits — and lay down a little literary bet:

The play takes place in a forlorn doughnut shop in a slowly gentrifying Chicago neighborhood. Actor Michael McKean — known best for his roles in the mockumentaries This is Spinal Tap, Best in Show and A Mighty Wind — plays the shop's lonely owner, Arthur Przybyszewski. McKean says the family-run shop is Arthur's cradle, in a sense — "and it might be his tomb, as well."

"But it all depends on how much of the outside world he lets in," McKean explains, "and what he lets that outside world do to him."

That outside world comes crashing through the shop's front door in the character of Franco Wicks, a 21-year-old neighborhood guy who applies for a part-time job. His arrival shakes things up immediately.

From Employee To Surrogate Son

At age 24, actor Jon Michael Hill is making his Broadway debut as Franco. He says his character is a challenger, with strong convictions that guide him from one moment to the next.

"He wants to transform the world into his vision," Hill explains, "and he has pretty good ideas about thinking somehow to do that, but a little misguided on where to start."

Franco comes from a broken home, and over the course of the play, Arthur becomes sort of a surrogate father and mentor to him. Letts says he was dealing with father issues of his own while he was writing the play. 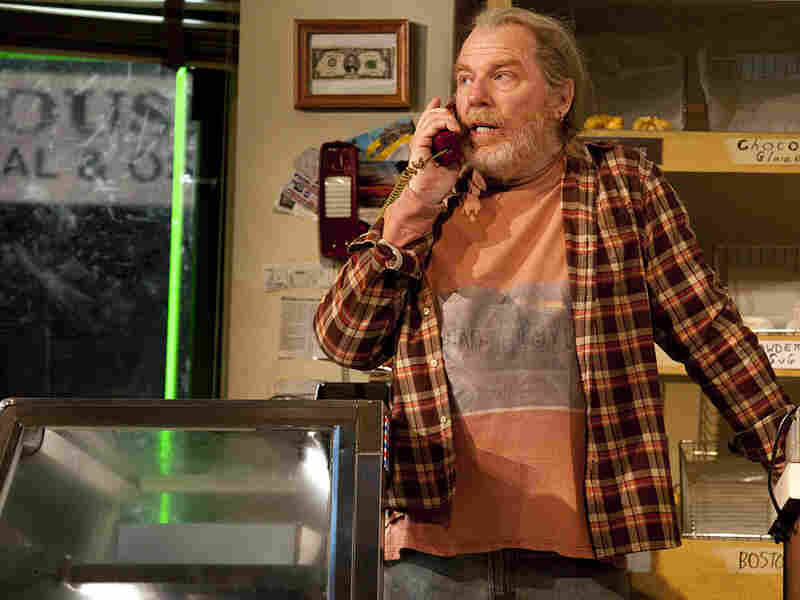 Arthur's family-run establishment is struggling to survive in a changing neighborhood — though encroaching gentrification isn't the only hurdle he and Franco will have to clear. Robert J. Saferstein hide caption Arthur's family-run establishment is struggling to survive in a changing neighborhood — though encroaching gentrification isn't the only hurdle he and Franco will have to clear.

"Actually, I'd started writing the play while my father was still alive," Letts says. "I completed the play after my father had passed away. So I'm sure those thoughts were activated by my father's illness and his death. The father-son dynamic in both of these guys is always a very fraught dynamic, whether it's fulfilled or unfulfilled. It does provide a lot of the dramatic impulse for the show."

The action of the play takes both characters to places that challenge their basic beliefs. And in some sense, writing this taut, intimate two-act play — after creating the outsized three-act drama of August: Osage County — has challenged Letts to the core as well.