Accessibility links
Empire State Building Goes Green — For Good? A $550 million renovation on the Manhattan landmark might seem like a lot of work — and a lot of money. But as Lara Pellegrinelli reports, in the name of long-run environmental efficiency, it may actually be easier being green.

The Empire State Building seems to be grappling with a color problem — specifically the color of its upper levels.

Building management got into hot water this week over plans to illuminate the top floors with red lights — in honor of the 60th anniversary of the People's Republic of China. Tibet-issues activists and other protesters turned out to denounce the recognition.

But it turns out the color the building's owners really want associated with the Manhattan landmark is green — which may be an achievable goal, after a $550 million environmental upgrade and renovation.

Even before the Empire State Building opened in 1931, its main attraction for sightseers was somewhere up above the sidewalk. Now there's reason (besides the line for the observatory) to linger on the ground level: the Celestial Mural. The collection of golden panels has run across the ceilings of the entire main lobby since the skyscraper was built, but most visitors — even most tenants — have never seen it.

"It was an urban legend," says Jeff Greene, president of EverGreene Architectural Arts. "Preservationists and historians knew that it was there, but the general public had forgotten about it. It was covered for 46 years."

Under A Dropped Ceiling, A Trail Of Grime

A team of artists from his studio started their work to re-create the mural — the original was too badly damaged to restore — by removing a dropped ceiling that had hidden it since the early 1960s.

"The World's Fair was coming to New York, [and] people wanted to modernize," Greene says, explaining that now-perplexing decision. "They wanted to improve the light levels."

(Other landlords made similarly head-smacking calls: "At the Chrysler Building," Greene says, "they just stuck downlights in the Edward Trumbull mural.") 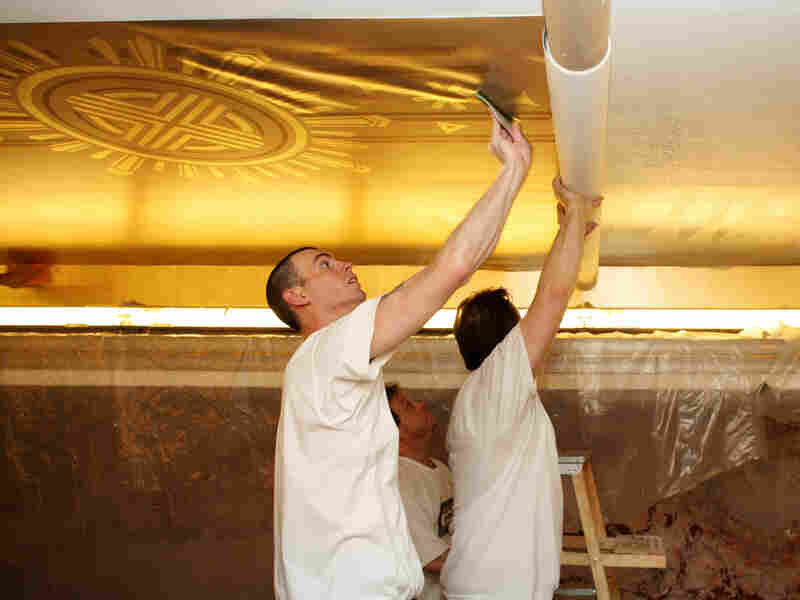 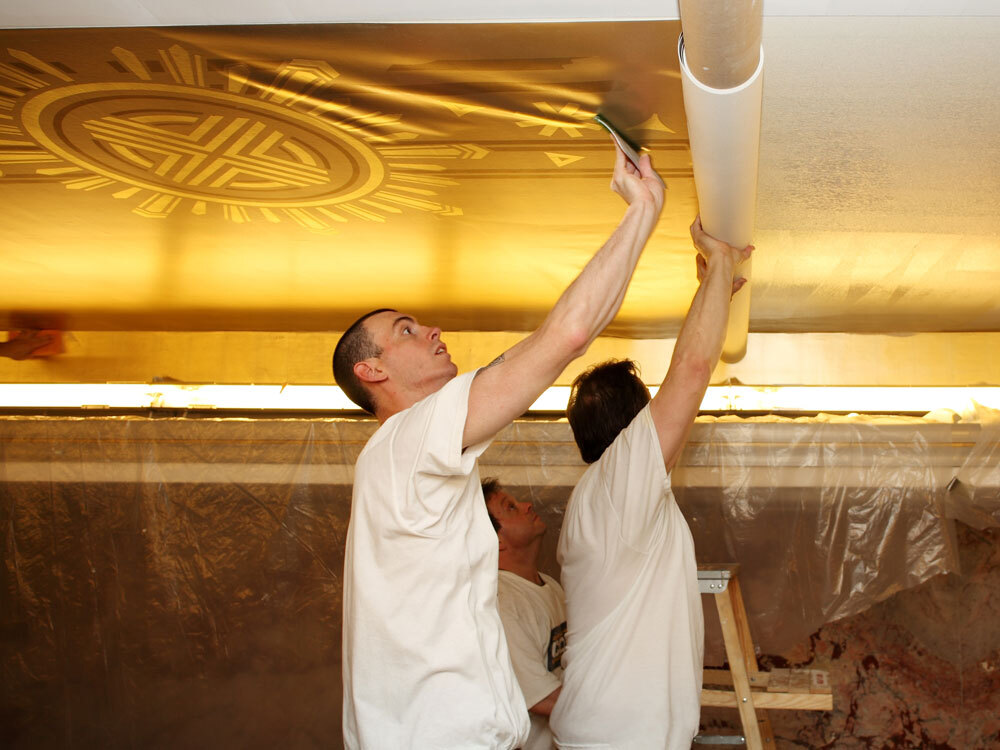 What EverGreene's team found in the Empire State Building's lobby was in even worse shape. The Celestial Mural had been riddled with hundreds of holes and covered in layers of white paint. As they set about researching their reconstruction, the team stripped small ceiling sections, eventually hitting gold leaf.

Luckily, the metallic surface under the paint had held a small electrical charge — enough to attract dirt in patterns that outlined the design, almost like a magnetic drawing board. Restorers were able to make out suns, moons and stars stylized to look like cogs and gears — a celebration of the Machine Age, designed by artist Leif Neandross.

The renovation has updated more than just the ceiling, of course. Under the sterile UV lights in the old white ceiling, the lobby's gray and pink marble corridors used to look a little like cold roast beef. Now, with warmer lighting, they conjure up a champagne cocktail.

"It looks like they're doing just a wonderful job — and I'm not often one who says that," says Lisa Kersavage, a public policy expert for the Municipal Art Society, a century-old organization that fights for intelligent urban planning, design and preservation.

Kersavage points out that construction-related debris accounts for 60 percent of New York City's waste stream. She wants to change a popular misconception: that it's better to demolish old buildings and erect new green ones.

"About 55 percent of New York City's building stock was built before 1940," Kersavage says. "And what's important about that is that pre-1940s buildings were built before the era of cheap energy and mechanical systems like air conditioning and heating. So they were built to work with the environment better than later buildings."

"Windows tend to be the first thing that people want to change when they want to do an energy retrofit," Kersavage says. "And there's so many ways to repair and improve the efficiency of existing windows instead of throwing them into a landfill. So it's really important in terms of the efficiency — but also in terms of the architectural character of a building."

So the Empire State Building Co. decided to refurbish all 6,500 of its thermopane windows.

"We're taking them out, breaking the seals, inserting a mylar sheath," says Anthony Malkin, who heads the company. "And then we're resealing with krypton argon gas and reinstalling them. All of this will be done without the windows ever leaving the building."

Malkin says the windows and other upgrades will result in a nearly 40 percent energy savings. And he's promised to share the new techniques developed during the restoration.

With the majority of New York's greenhouse gas emissions coming from the construction and operation of buildings, that could help other architectural gems ensure themselves a golden future — whatever the color of their lobby ceilings.