Accessibility links
Olympic Caveats: Host Cities Risk Debt, Scandal The Obama administration says Chicago winning its bid for the 2016 Olympics would be good for the city's economy. The same argument has been made by many Olympic bidders — but the proof is sketchy. 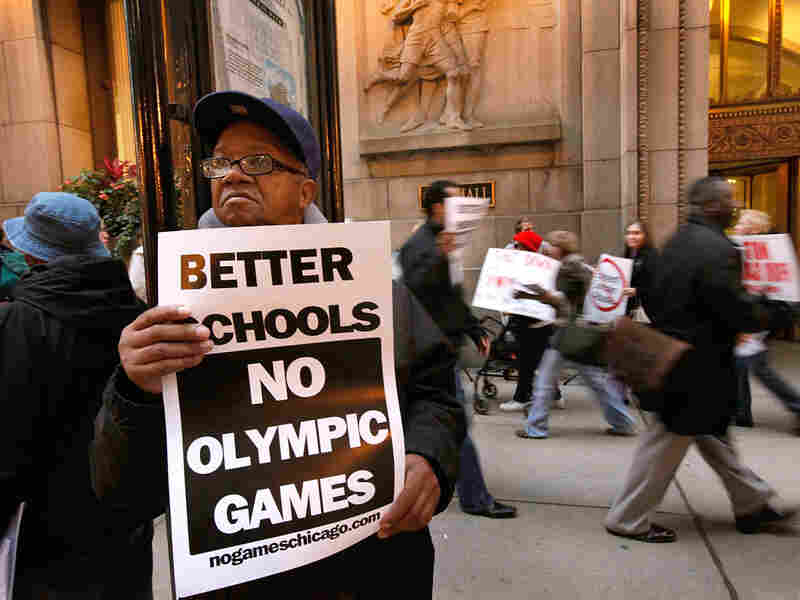 Limmie McMiller stands with demonstrators outside City Hall to protest Chicago's bid for the 2016 Olympics. The International Olympic Committee is scheduled to announce which city will host the games Friday. Scott Olson/Getty Images hide caption

Limmie McMiller stands with demonstrators outside City Hall to protest Chicago's bid for the 2016 Olympics. The International Olympic Committee is scheduled to announce which city will host the games Friday.

If making money were an Olympic event, no city hosting the games would win a gold medal. Or silver. Or bronze.

"There has never been an Olympic Games that has made a profit," says Robert Barney, director of the International Centre for Olympic Studies at the University of Western Ontario. Barney is also co-author of Selling the Five Rings: The International Olympic Committee and the Rise of Olympic Commercialism.

Fold in all the costs and revenues, he says, "including federal allotments, municipal allotments, provincial or state allotments, it's always been that a debt has to be paid somewhere."

The additional costs include security and infrastructure improvements not included in the Olympic budgets but provided by government.

Barney and others who have analyzed Olympic costs contradict the claims of Olympic boosters and White House press secretary Robert Gibbs, who was asked this week to justify President Obama's travel to Denmark to support Chicago's bid for the 2016 summer games.

"Obviously, any Olympics showcases the country those Olympics are in," Gibbs replied. "And there's a tangible economic benefit to those games being here, and the president wants to help out America's bid."

Actually, tangible economic benefits are elusive. The 1984 Los Angeles Olympics are often hailed for finishing with a $233 million surplus. But Barney says the calculation includes only direct costs of staging the games and not the indirect costs provided by city, state and federal governments. The same is true, he says, for the 1988 Winter Olympics in Calgary in Alberta, Canada, and the 2002 Winter Olympics in Salt Lake City. Organizers of both games claimed multimillion-dollar surpluses, but neither included massive federal spending when adding up costs.

"No reasonable person thinks that the direct benefits of hosting the Olympic Games or any other mega event cover the costs," concludes Andrew Rose, an economist at the Haas School of Business at the University of California in Berkeley. Rose and his colleagues combed Olympic records and economic data for evidence of benefits and produced a study titled The Olympic Effect.

"You have to have some enormous indirect benefit, and that's what we've been focusing on in our research," Rose continues. His study did not find the kind of indirect benefits Olympic boosters promote, such as increased tourism or new industries. Instead, Olympic host cities, on average, experience a 30 percent increase in international trade.

Cities simply bidding for the Olympics experience the same sustained growth in exports. Even those losing out in the Olympic bidding contest benefit.

"When a country submits a serious bid to host the Olympics," Rose says, "what they're really doing is saying that they're open for business and they're going to become internationally integrated and a serious member of the international community."

Some cities seek intangible benefits, like image makeovers that improve their self-esteem and international profile. Chicago is a prime example of that, according to economist Allen Sanderson of the University of Chicago.

Sanderson recalls walking into small neighborhood bars with colleagues on a recent trip to Tokyo: "Somebody asked where we were from, and we said, 'Chicago.' And he said, 'Oh. Al Capone!' "

If Chicago hosts the 2016 Olympics, Sanderson adds, "This will be the chance to turn away from the Al Capone image of Chicago."

But, it could also reinforce Chicago's history of political influence and patronage.

"We've got a culture of corruption," Sanderson notes. "We've got a long history of cost overruns on projects [and] just unconstrained spending. That doesn't bode well, especially when you face a firm deadline that this better be done by June 2016."

Other cities have seen grand Olympic dreams dissipate into massive debt or disgrace. It took the city of Montreal 30 years to pay off the billion-dollar debt it incurred during the 1976 games. Olympic costs for Athens more than tripled to more than $15 billion. Nagano, Japan, spent so much for the 1998 Winter Games, and triggered so much suspicion with its spending, that Olympic organizers destroyed their financial records. Salt Lake City's 2002 Winter Games were marred by the worst ethics scandal in Olympic history. The 1996 Olympics in Atlanta are known in Olympic circles as the tackiest games ever.

Many Olympic cities justify the spending and the risk to reputations because they gain new highways, transit systems, affordable housing, sports facilities and other infrastructure improvements.

"What you'd like to do, ideally, is site those in terms of what we really want and where do we want them," Sanderson says. The Olympics, he suggests, distort the process and costs, forcing decisions that meet immediate Olympic needs but may not meet the community's long-term needs. That leads to what Sanderson calls "inefficient spending."

Some cities end up with Olympic venues that have high operating costs and little practical utility after the games. But some venues become cherished recreation centers and major competition sites with heavy use.

During an Olympics, many host cities experience a clear benefit, barring something like the terrorist attack in Munich in 1972 or the bombing in Atlanta in 1996.

"There's a great deal of civic pride from putting on a successful Olympics," says Barney, referring to the global television coverage of the games and the host city. "You're placed before the world, and that does have some benefits psychically."

But with all the risks, the process of bidding for and hosting an Olympics should probably come with this warning: Satisfaction NOT guaranteed.