Accessibility links
Critics Press Italy, Church on Clergy Abuse Many pin the blame for a church coverup on the former Cardinal Ratzinger — now Pope Benedict XVI. There are no records on clerical sex abuse in Italy and those who want cases investigated often face the wrath of the Vatican as a result. 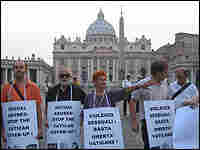 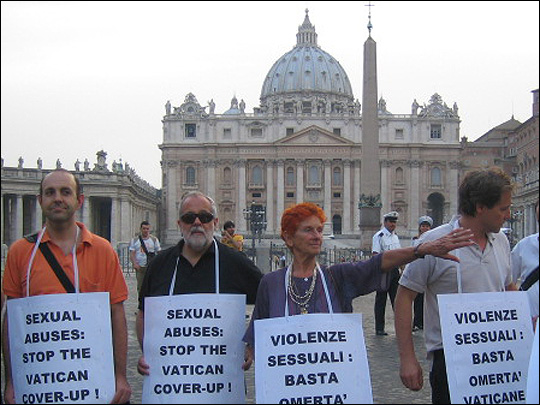 Protesters at St. Peter's Square face an uphill battle against the church's dominance of Italian life.

Yet in Italy — a bastion of Catholicism — the issue never came to the surface and never made headlines.

Now, in the Vatican's backyard, the veil of secrecy is beginning to lift.

This was the final event of a day-long symposium on clerical sex abuse organized by the Radical Party on the premises of the Italian parliament.

The day began with the screening of an American documentary, broadcast in January on PBS, by filmmaker Joe Cultrera about his brother Paul, a victim of clerical sex abuse.

The story of Paul Cultrera, who kept silent for 30 years, resonated with the participants in the symposium.

Marco Marchese, a 26-year-old from Agrigento in Sicily, says he was absued by a priest for four years, starting when he was 12.

He says the American story is "the story of all of us."

"At first we think we're the guilty ones," he says. "It takes years, and only if you're lucky enough to find someone who believes you, can you heal. I just wanted to stop this man from hurting others and hoped the church would embrace me, but that embrace never came."

In fact, the local bishop filed charges against Marchese for slandering the church. Ultimately, Marchese prevailed and his abuser was convicted. He now helps other victims, but says it's very difficult for them to come out into the open.

"Were not just in Italy, we're in the land of the Vatican," Marchese says. "In small towns, it happens that when a priest is under investigation or in jail, people march through the streets with torches in his defense — not in defense of the victims."

Domenico Del Gaudio came to Friday's gathering from the southern region of Luciana. He said his 6-year-old daughter was sexually abused by a nun, but the tables have been turned against his family.

"We are told we're hysterical, we're crazy, we've been brainwashed," Del Gaudio says. "Our mayor says we have dishonored our town."

There are no statistics on the number of clerical sex abuse victims in Italy. Radical Party MP Maurizio Turco, the symposium organizer, says Italian legislation is murky.

"We have a state-church treaty that guarantees areas of impunity to Vatican officials, including bishops and priests," Turco says. "The average citizen who learns of a crime has to report it. Bishops and priests have a broader margin of movement."

One sign that clerical sex abuse is a taboo subject in Italy was last month's controversy over the broadcast of a BBC documentary on state-run TV. The broadcast was authorized only if it was followed by rebuttal from church officials.

Bishop Rino Fisichella, rector of Rome's pontifical Lateran University, rejected accusations that the Vatican protects pedophile priests at the expense of their victims.

"Children are well protected by the Catholic church and nobody has the right to give us lessons on this," the bishop said.

Little is known about Catholic church investigations and canonical trials. Until six years ago, cases were handled in their dioceses.

But in a 2001 letter to all bishops, then-Cardinal Joseph Ratzinger, the current Pope Benedict XVI, ordered that all sex-abuse cases be transferred to the Vatican.

As theological watchdog, he also imposed total secrecy on the proceedings, with the threat of excommunication for any violations.

Daniel Shea, an American lawyer who has defended many sex-abuse victims in U.S. courts, accuses the Vatican — and the former Cardinal Ratzinger — of obstruction of justice.

"This gives them the opportunity to silence the victim, threaten the victim with hellfire for all eternity if they ever reveal what is going on in this transaction," Shea says.

One Italian magazine says 1,000 sex-abuse cases have been reported to the Vatican, but only 10 have been investigated.

"I stayed silent for 30 years because they did such a good job at convincing me that it was all my fault, and this could not be something a holy man had done to me," he says.