Accessibility links
Maddening 'Mad Men' And Its Redemptive St. Joan The Emmy-darling AMC TV series devotes an almost fetishistic attention to style. But is there any substance beyond the surfaces? Critic-at-large John Powers goes looking — and comes back with one especially well-rounded answer. 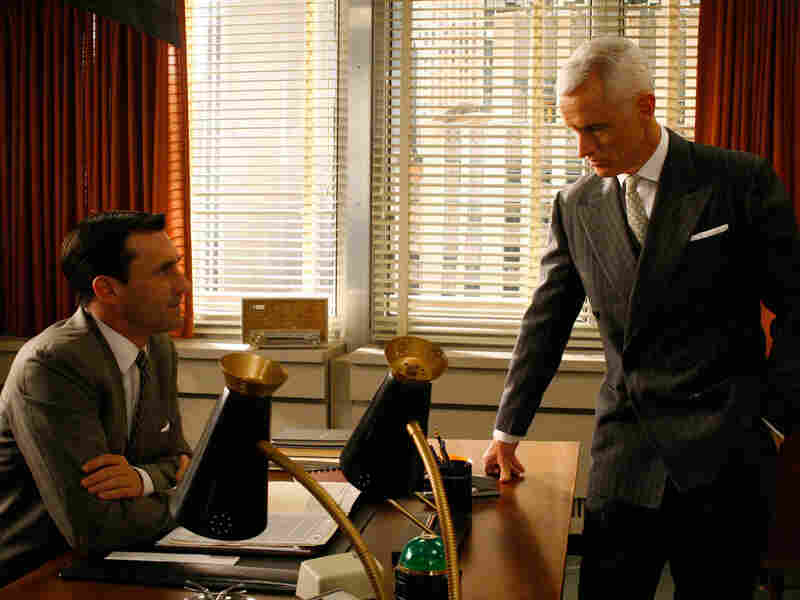 Don (Jon Hamm) and Roger (John Slattery) are high-flying ad execs at the fictional firm of Sterling Cooper — where work often gets in the way of play, but where the spirit of the '60s doesn't seem quite authentic to critic John Powers. AMC hide caption 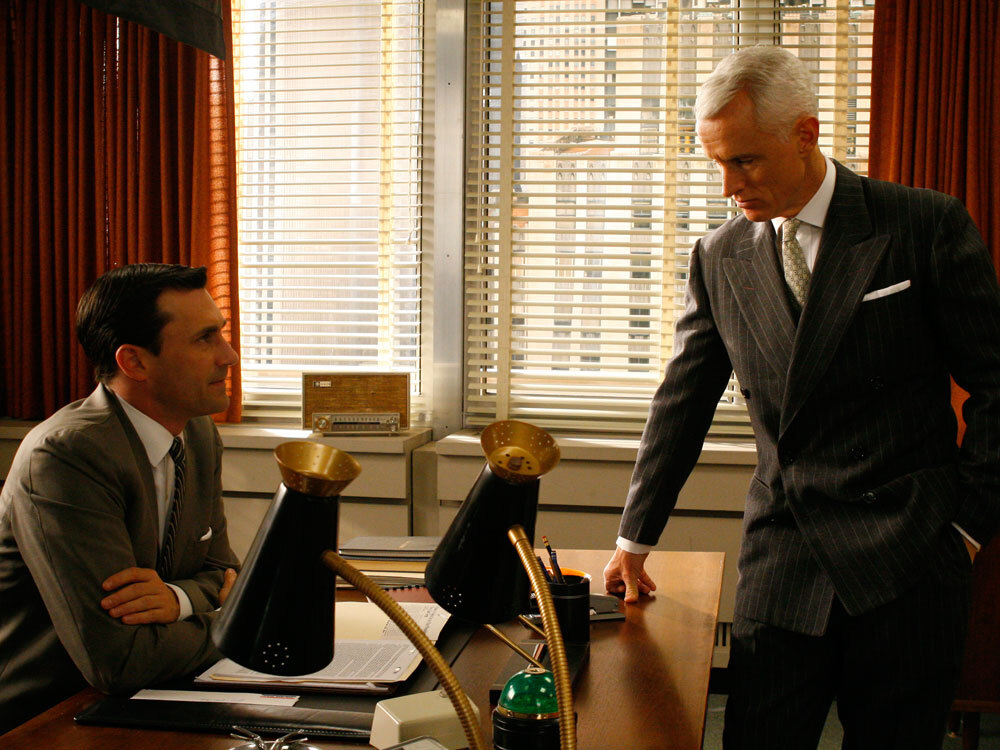 Don (Jon Hamm) and Roger (John Slattery) are high-flying ad execs at the fictional firm of Sterling Cooper — where work often gets in the way of play, but where the spirit of the '60s doesn't seem quite authentic to critic John Powers.

The media just love this series, which is centered on the fictional Sterling Cooper ad agency in the early 1960s. The acclaim is easy to understand, for Mad Men goes out of its way to flaunt its importance. It all but laminates your eyeballs with its style. The show not only makes a fetish of period detail — Web sites ponder every song choice, every cigarette pack — but the relentlessly studied way it's shot and acted often turns its characters into design elements.

Which, in a sense, they are. Most of the characters are less three-dimensional human beings than concepts — even their darkest secrets feel schematic. The hero, Don Draper, is a type: the disillusioned ad man fleeing his past. His spouse, Betty, is, predictably, the suburban housewife who's going quietly mad.

Peggy is a young copywriter who's battling sexism with history on her side — women are starting to rise in the workplace. There's the deluded bohemian Paul, the closeted gay Sal and the agency's erstwhile boss, Roger Sterling, a privileged bon vivant who's being squeezed out by serious corporate types.

The same schematic approach shapes the show's vision of history. Like a Cliff Notes for the Early '60s, Mad Men bold-faces passe attitudes, making it easy for us to notice — and feel superior to — the era's sexism, anti-Semitism, racism and littering. Even worse, it tends to hit every historical touchstone like a gong. It's not enough for Season 3 to be heading toward JFK's assassination; Roger's daughter has to plan her wedding for that very same weekend.

This would annoy me less were the show not so glum. But for some reason, creator Matthew Weiner has chosen to depict Kennedy-administration America — renowned for its twist-and-shout optimism — as if it were the Antonioni administration. As one who lived through these years, I hope young people don't actually think Mad Men captures what things were like back then. 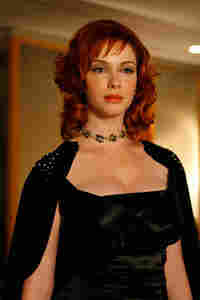 Headstrong, whip-smart office manager Joan (Christina Hendricks) is, to Powers, the show's saving grace — a character whose dilemmas seem both real and poignant among a sea of mere signifiers. AMC hide caption

And at its best, Mad Men gets to things that feel original. Nowhere is this clearer than in its portrait of Joan, a kind of female character I'm not sure I've encountered before — an impressive woman doomed to unhappiness because she's caught on the wrong side of history. Her fate is written on her flesh, the busty, full-hipped, Monroe-era body that fell out of fashion in the early '60s and has yet to make a comeback.

Magnificently played by Christina Hendricks, Joan is smart, funny, sexually canny and supremely competent. She can play "C'est Magnifique" on the accordion or save a man's life by applying a tourniquet as those around her are panicking. There's just one problem: Joan has perfected the traditional career-girl strategy of getting a job, having some laughs, then landing a "good" husband — in her case, a doctor. Then she discovers that her husband isn't what she dreamed, and even more unsettling, that the world is changing: Men will now hire women to do creative jobs in advertising. But because she's played the sexy office manager so effectively, men will never hire her to do them, even if she's more talented than the men are.

Caught between the past and the future, Joan is the show's most complex and compelling figure. Warm and calculating, angry and ebullient, ravishingly sexy and distressingly backward about race, she's no angel. But she is human.

With Joan, Mad Men comes closest to doing what it ought to do. It lets us understand how people actually lived and breathed during those years, rather than merely telling us what their lives meant and how cool the whole thing looked.