Accessibility links
Movie Review - Good Hair - Untangling A Knotty (But Big) Business Spurred by a wistful question from his daughter — "Why don't I have good hair?" — Chris Rock sets out to explore the booming black hair-care industry. The comic doesn't exactly take a fine-toothed comb to the question of why some African-American men and women go to such lengths to keep their 'dos done just so — but he has a good time with the process. 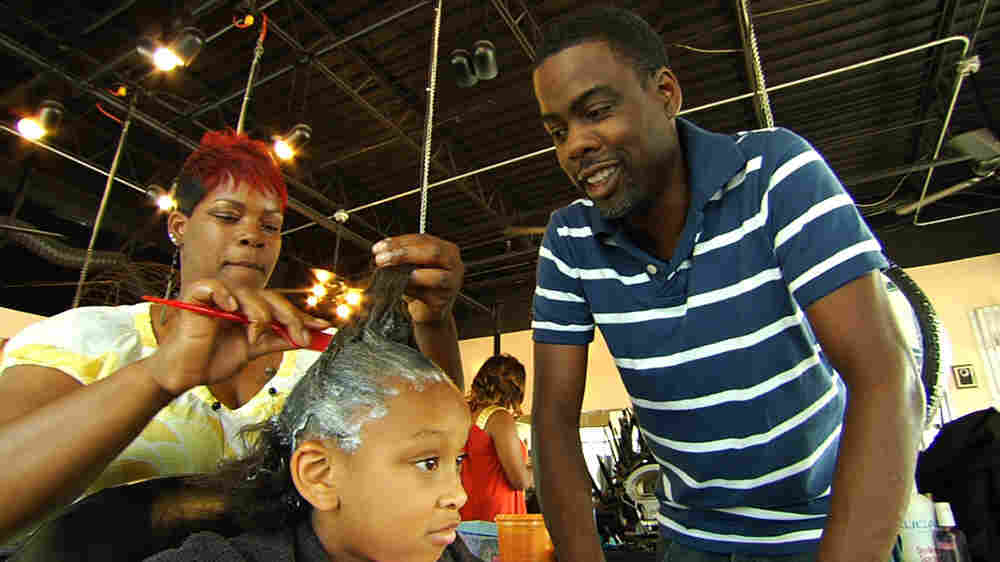 Setting Things Straight: Comedian Chris Rock explores the world of black hair care, talking to men and women about the lengths they go to as they manage their locks. Roadside Attractions hide caption

The documentary Good Hair takes its inspiration and its title from a question comedian Chris Rock fielded one day from his 6-year-old daughter: "How come I don't have good hair?" she wondered, a query the comedian says set him to pondering the social expectations that had put that notion into her head. Grabbing a film crew, he went in search of answers — at a hair-shaving temple, a hair-styling convention and a range of hair-raising spots in between.

"How Much Is The Weave?"

He begins his quest at the Bronner Brothers Hair Show in Atlanta, where some 120,000 hair professionals show up at semiannual showcases to learn about the latest twists in straighteners, wigs, sprays and gels. Also, to watch a competitive styling contest — a sort of Follicular Follies, with everything from underwater haircutting to marching bands. All because the black hair business is big business.

African-Americans represent 12 percent of the population, a Bronner brother tells him, but buy 80 percent of the hair products, a striking statistic made more striking by the fact that many of those products are downright painful to use. The chemicals in hair "relaxers" essentially burn hair straight, and — as Rock has a scientist establish with a piece of raw chicken — they can also burn right through skin. Yet these scalp-scorchers are used by everyone from small children to the Rev. Al Sharpton to poet Maya Angelou.

Once hair is relaxed, there's the issue of fullness, and Rock convinces a slew of glamorous celebrities — including Nia Long, Eve, and Raven-Symone — to talk about their weaves, clips and extensions. Looking at these women, you'd never guess their hair wasn't all theirs, which is, of course, the point. But achieving their unnaturally "natural" look is time-consuming and can be enormously expensive.

Rock heads to India to watch hair being sacrificed in temple rituals, then follows it through the sorting and combing processes — most women on the purchasing end prefer bug-free hair, Rock is told — and through U.S. wholesalers back to Los Angeles salons. There, for thousands of dollars (one stylist talks about her layaway plan), it gets woven into the 'dos of African-American women.

A good part of the fun here is the way our narrator gets at complicated questions in his characteristically glib ways. Rock goads guys in a barbershop into talking about the limbs they'd likely lose if they ever tried to touch their girlfriends' hair, and encourages women to comb through all sorts of what you might call "tress"-ful intimacy issues — when to take a shower together, the awkwardness of what one of them calls "weave sex," and so on.

He's not as acerbic as he generally is in his stand-up routines, though; working with filmmakers who are mostly comedy writers, he's content to avoid the issue's knottier roots. Why is straight white or Asian hair so popular? Black hair less so? Answers will have to be teased out elsewhere. Good Hair isn't selling anything but a good time.