Accessibility links
A Changed Supreme Court Faces Key Cases In 2009-10 Session The Supreme Court is set to take up issues of campaign finance; gun rights; animal cruelty; and separation of church and state. The court must also adjust to the addition of Justice Sonia Sotomayor, taking over the seat occupied for 19 years by David Souter. 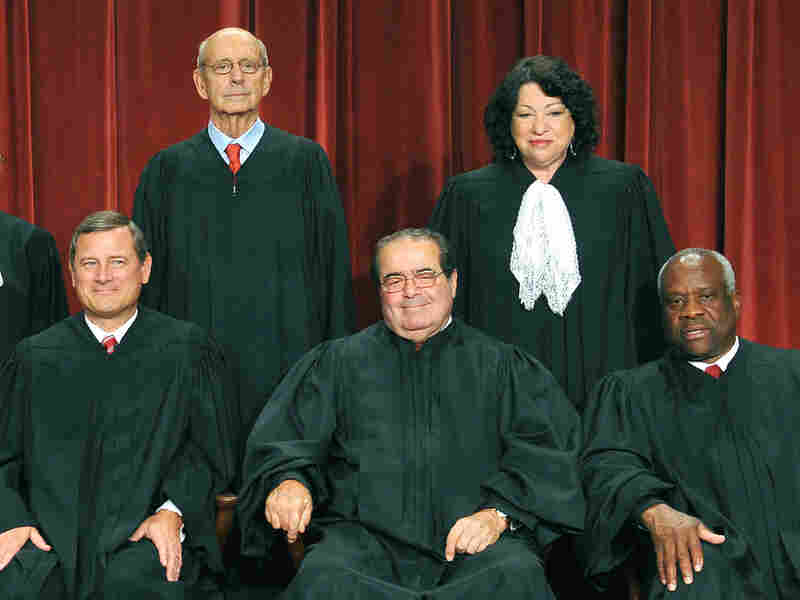 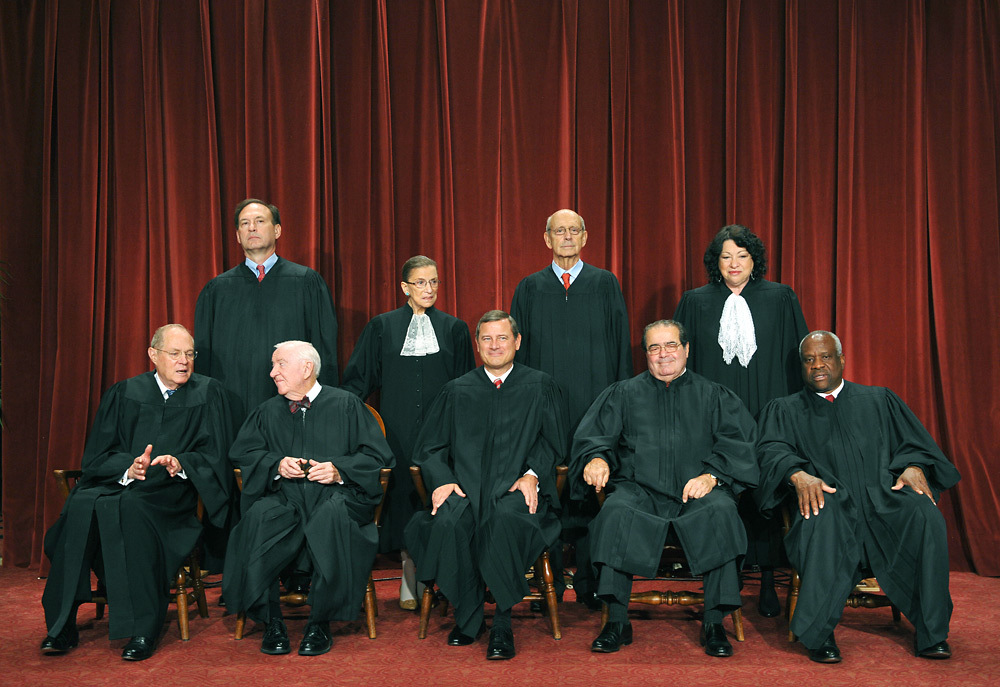 Campaign finance; gun rights; animal cruelty; separation of church and state; life terms for juveniles — these are just a few of the issues before the Supreme Court as the justices officially open a new term Monday.

Not only are some of the issues new — so is Justice Sonia Sotomayor, now in the seat occupied for 19 years by retired Justice David Souter.

For the 11 years between 1994 and 2005, the composition of the Supreme Court remained unchanged. And now, within the space of four years, there have been three changes.

It may be that President Bush's most long-lasting legacy will be his appointment of Chief Justice John Roberts and Justice Samuel Alito. They have tipped the court in a dramatically more conservative direction.

The Court Begins A New Era

As for the newest justice, President Obama appointee Sotomayor, she is not expected to make as much of a change in the overall ideological makeup of the court because, to oversimplify, she is a moderate liberal replacing a moderate liberal on the court.

Of the other justices, all but Alito have experienced a transition with a new justice, and they talk about it in distinct, even intimate terms. Chief Justice Roberts, awaiting the appointment of the new justice this spring, joked that it was like waiting for the arrival of a wife in an arranged marriage.

In a recent C-SPAN interview, he called the change unsettling.

"You quickly get to view the court as composed of these members, and it becomes kind of hard to think of it as involving anyone else," Roberts said.

"I suspect it's like people look at their families. You know, this is the family. How could it, you know, be different? But you do get new arrivals in both of these situations. It's a tremendous sense of loss."

Justice Clarence Thomas says a new justice takes the court out of its comfort zone — especially when there's been a long period without a vacancy, as there was between 1994 and 2005.

"We had a long run together. And you get comfortable with that, and then it changes," Thomas said.

Justice Anthony Kennedy, also speaking on C-SPAN, compares the appointment of a new justice to the changes on a jury when one member becomes ill and has to be replaced. It's a new dynamic, he said.

"It's stressful for us, because we so admire our colleagues," Kennedy said.

"We wonder, oh, will it ever be the same. But I have great admiration for the system and it gives us the opportunity, again, to look at ourselves to make sure that we're doing it the right way."

The new court has already heard its first argument, at a specially scheduled session in early September.

The subject was campaign finance, and whether the court should uproot more than a century's worth of legislation, laws upheld either explicitly or implicitly in the past by the court.

The case was first argued in March on a relatively minor point, but the justices ordered it reargued last month, with the focus this time on whether the long-accepted ban on corporate and union spending in elections violates the First Amendment guarantee of free speech.

Another major First Amendment case is to be argued this week. It tests a federal law banning the sale and distribution of photos and videos depicting animal cruelty.

A federal appeals court threw out the conviction of a Virginia man who sold dogfighting videos on the Internet. The defendant did not make the videos himself — most were made in Japan, where dogfighting is legal.

Now the federal government is asking the Supreme Court to declare that videos depicting animal cruelty are not protected by the Constitution's guarantee of free speech — in short, to carve out an exception to the First Amendment much like the one the court has carved out for depictions of child pornography.

The publishing industry, media organizations, and the National Rifle Association maintain that this rationale threatens vast swaths of free expression — that it would, for example, allow the prosecution of everything from hunting and fishing videos to Hollywood movies.

Church And State — And A Cross

A different aspect of the First Amendment — the separation of church and state — is at issue in a case involving a giant five-foot cross erected on federally owned land in California.

When a federal court ruled the cross unconstitutional, Congress gave the land to the Veterans of Foreign Wars.

The lower courts then ruled the land grant was an illegal end-run. The government appealed, contending that there is no live lawsuit here, that the man who challenged the land give-away cannot demonstrate any harm and therefore can't get into court.

If the government wins, it will likely make it considerably more difficult to challenge other religious displays on public property.

The court is also taking on the issue of gun rights again. Last year, the court declared for the first time that the constitutional right to bear arms is an individual right that puts some limits on federal laws and regulations. Specifically, the court struck down a total ban on handguns in the District of Columbia.

This term, in a case involving a Chicago gun ban, the court examines whether the same limits apply to state and local laws.

In the criminal law field, two cases from Florida test whether it is unconstitutionally cruel and unusual punishment to sentence a minor to life in prison without parole for crimes that do not involve a death.

At least one justice, Antonin Scalia, has suggested that the expansive phrase "honest services" invites abuse by headline-grabbing prosecutors, because it's so broad that no citizen can know what conduct is illegal.

Cases From The Business World

There are many business cases before the court. One tests whether a Wall Street formula for buying and selling commodities can be patented; another tests whether the people who run mutual funds can charge higher fees to individual clients than to institutional investors like pension funds. And there's a case testing whether the law enacted in the aftermath of the Enron scandal — to monitor public companies' accounting — is constitutional.

Then too, there is a big property rights case that pits state environmental protection agencies seeking to rebuild eroding beaches against private homeowners on the shoreline.

In this case, a Florida property owner claims that the state cannot, in essence created a strip of beach at the water's edge and then say it no longer belongs to the homeowner whose property previously went right to the water.

Finally, waiting in the wings are some big questions. Most immediately, the Obama administration is seeking to block a lower court decision requiring the release of photos of detainee abuse in the Bush administration.