The Los Angeles Philharmonic welcomes its new music director with a special concert Saturday evening. Gustavo Dudamel is the closest classical music comes to "hot" — he's handsome and charismatic, and he has a reputation for energizing orchestras. Dudamel comes from Venezuela and is a product of something called El Sistema — The System. It's a music education program for the country's poorest children that began in a garage more than 30 years ago. More than 250,000 people have passed through its doors. 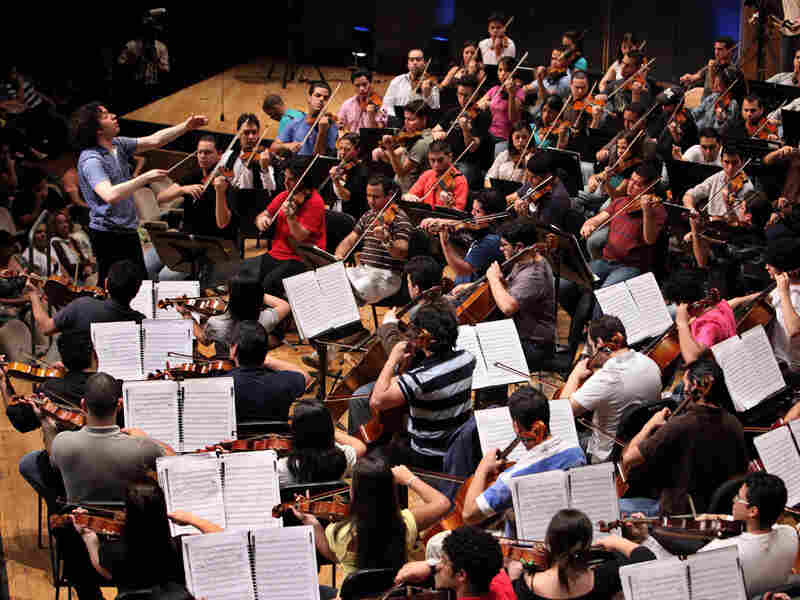 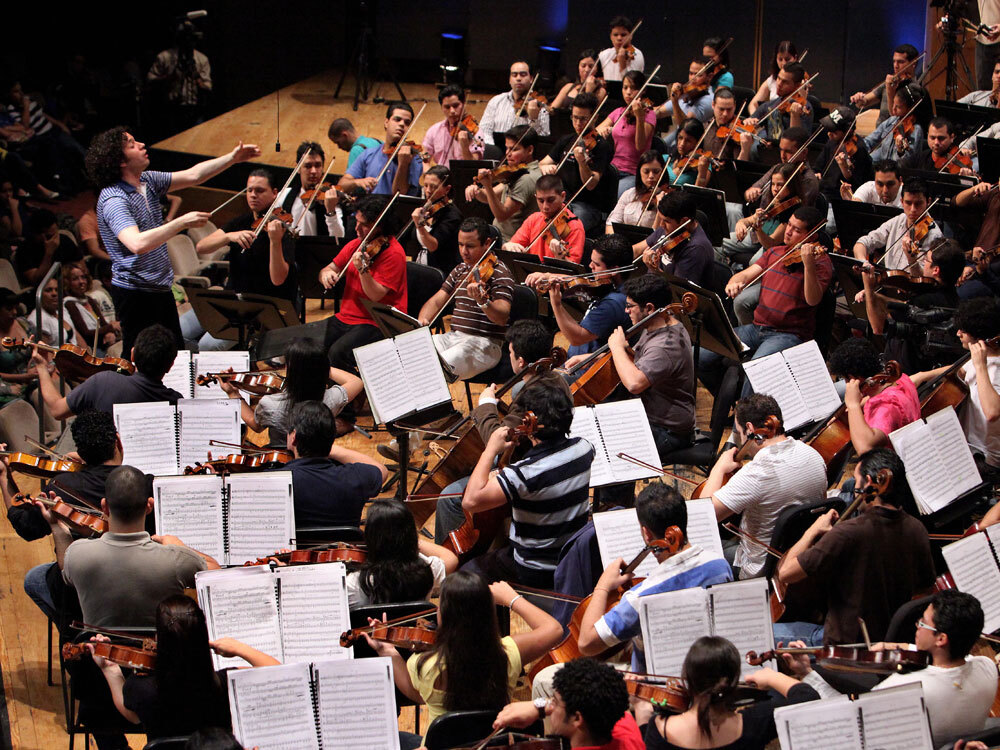 Conductor Gustavo Dudamel leads El Sistema during a June 2009 rehearsal in Caracas, Venezuela. He is now music director of the Los Angeles Philharmonic.

The state-of-the-art concert hall in which El Sistema performs is enormous and boasts a shiny hardwood floor. But this building isn't merely a concert hall; it's also a school where young people come to learn and practice playing classical music. The school has 84 classrooms and three concert halls, one of which seats 800 people. There's another that seats 400, and one outside seats 15,000.

During the day, this megafacility is flooded with thousands of young people eager to become better musicians. Diana Tardes, 15, plays the contrabass, an instrument almost twice as big as she is.

"This instrument caught my attention, because it's an instrument that most skinny little girls like me don't normally choose," she says. "They usually choose the violin, but I wanted to choose something different."

A teenager wanting to do things differently isn't uncommon, but part of what makes El Sistema unique is that 70 percent of those in the program are poor.

Many of the young people performing in this concert come from Caracas' infamous slums, which are among the most violent in the world. Being surrounded by poverty, drugs and murder is a lot of baggage for a young person to carry. Ulysis Acano, a principal conductor in the program, helps them carry it.

"People without a father, without a mother, with severe problems at home like abuse and stuff like that," he says. "But once I get down from there, I'm like a friend, like a father and — well, you hear their problems and you can help find a place where they can seek help or you can help them yourself."

Kids in the program come to practice every day after school from 3 to 7 p.m., and even on Saturdays. When you speak to some of them, you're immediately struck by the maturity they display. It seems largely due to the discipline the program imposes.

"Music has a gigantic amount of mental, mathematic and physical training, and they've understood that message very well," he says.

Learning to play a classical instrument can be extremely difficult, but Miguel Rodriguez, a 19-year-old clarinet player, says he doesn't get frustrated.

"I only get stuck, but then I reflect on what I'm doing wrong and I just continue," Rodriguez says. "That's it."

It's an approach he says he applies to his day-to-day life. Most kids in El Sistema have learned how to overcome adversity, since they've been doing it since kindergarten. Some were as young as 2 when they came to the program.

From The Ground Up

Most young people start out in El Sistema singing in the chorus. Then they work their way up: learning the instrument they choose, practicing and playing in the orchestras. Susan Simon is the director of the Infant Academy in Caracas.

"We put them in contact with success at a very early age," she says. "The first thing they accomplish musically is applauded. So they start to learn that that's fun and recognized. They like to do it simply because they've experienced success."

They learn little by little, but the huge amount of musical knowledge these kids display is remarkable.

Many of the program's teachers and directors are about the same age as the students. This allows the students to relate and adds an extra element of fun. Andres Gonzalez, 23, is one of El Sistema's most popular conductors. He's been in the program since he was 5, and he likes his orchestra's music to be as exciting as possible.

"We think that music doesn't have to be boring," Gonzalez says. "We don't need to be sitting down, all serious. And mambo isn't meant to be heard sitting down, much less to be all serious. None of that — we're going to have fun."

Most but not all of these young people will become professional musicians when they grow up. Maribel Cartellanos, a 25-year-old conductor in the program, says that's not the point.

"My sister also studied music, but she decided on another career," she says. "But this left her the discipline, the organization, the constant day-to-day desire to be better, because that's why we're here."

The El Sistema program has spread beyond Caracas and to the rest of the country, thanks to its success with children. Now, every city in Venezuela has a youth orchestra.