Accessibility links
New Jobs Numbers Point To Fragile Recovery The jobs market deteriorated in September as employers cut 263,000 jobs, far more than expected. The unemployment rate for the month was 9.8 percent, the highest since June 1983. The quickening pace of layoffs deals a blow to hopes for a solid economic recovery.

The jobs market deteriorated in September as employers cut 263,000 jobs, far more than expected. The unemployment rate for the month was 9.8 percent, the highest since June 1983. The quickening pace of layoffs deals a blow to hopes for a solid economic recovery.

The economy may be improving, but the job market is not. Job losses worsened in September as the country shed more than a quarter-million jobs. The nation's unemployment rate ticked up to 9.8 percent. President Obama spoke about the news today, just after returning from Copenhagen.

President BARACK OBAMA: Today's job report is a sobering reminder that progress comes in fits and starts, and that we're going to need to grind out this recovery step by step.

FRANK LANGFITT: John Silvia is chief economist with Wells Fargo Securities. And this morning, he captured the reaction of many to the September jobs report.

LANGFITT: Holy cow, indeed. Two hundred and sixty three thousand jobs disappeared in September. That's about 60,000 more than in August. In other words, after steady improvement, job cuts are going in the wrong direction, and those losses are deepening even as analysts believe the economy is beginning to grow. Silvia says that suggests the U.S. is almost certainly entering�

Mr. SILVIA: A jobless recovery. Moderate economic growth may be 2.5 percent or so - growth not fast enough to generate the kind of jobs that most people are going to come to expect and especially, what politicians would like to see.

LANGFITT: For the nation's unemployed, who now number more than 15 million, a jobless recovery would be brutal. The number of unemployed would continue to grow, and people would remain out of work even longer. After today's report came out, Vice President Joe Biden tried to reassure people that employment will improve.

Vice President JOE BIDEN: Today's bad news does not change my confidence in the fact that we are going to recover. We will be producing jobs.

Ms. SHIERHOLZ: We need to see temp workers turn up first before we will see recovery in a larger economy.

LANGFITT: Shawn Carroll may be on the leading edge of that change. He's the chief financial officer with Crown Services. It's a temp company in Ohio, which provides workers to hospitals, auto suppliers and other manufacturers. Carroll says clients began asking for more workers a few months ago, but he doesn't expect demand to return to pre-recession levels until next summer.

Mr. SHAWN CARROLL (Chief Financial Officer, Crown Services): I don't see people going back and spending like they used to.

LANGFITT: Carroll says during the recession, clients learned to operate with smaller workforces, and they're reluctant to add more workers until they see clear signs of recovery. Carroll feels that way, too.

Mr. CARROLL: I know in our case, I decreased hours at headquarters, and we're still getting the job done.

LANGFITT: Do you see any point when you would begin hiring again directly for the company?

Mr. CARROLL: Yeah, well, I mean, there's been managers that have mentioned my sales are up. I need to start thinking about another coordinator.

LANGFITT: What do you say?

Mr. CARROLL: �I say, you know, if you think you can do it with what you have, I would give that a shot first.

LANGFITT: Other chief financial officers are taking the same approach. In a recent poll by Duke University and CFO Magazine, most companies said it would take several years for employment to return to pre-recession levels. 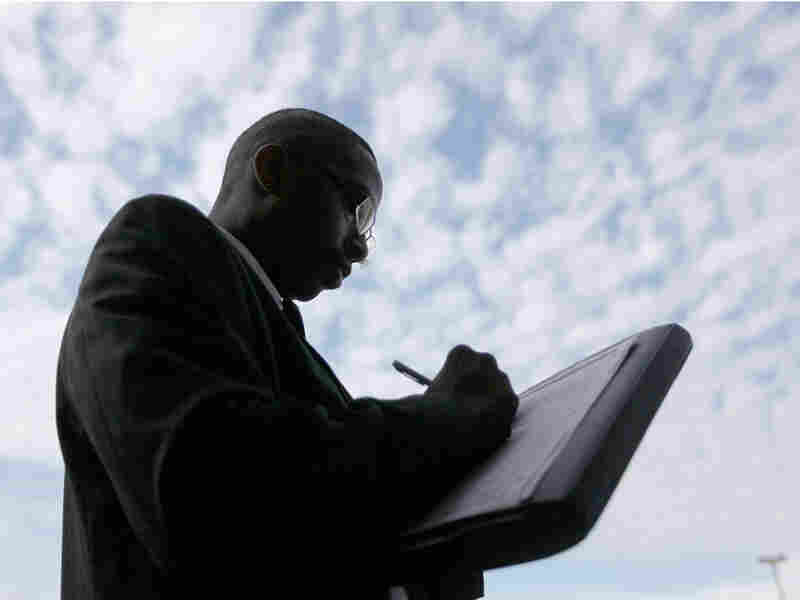 Melvin Winston fills an out application on Sept. 25 for positions at a new bar and restaurant in Detroit. Paul Sancya/AP hide caption 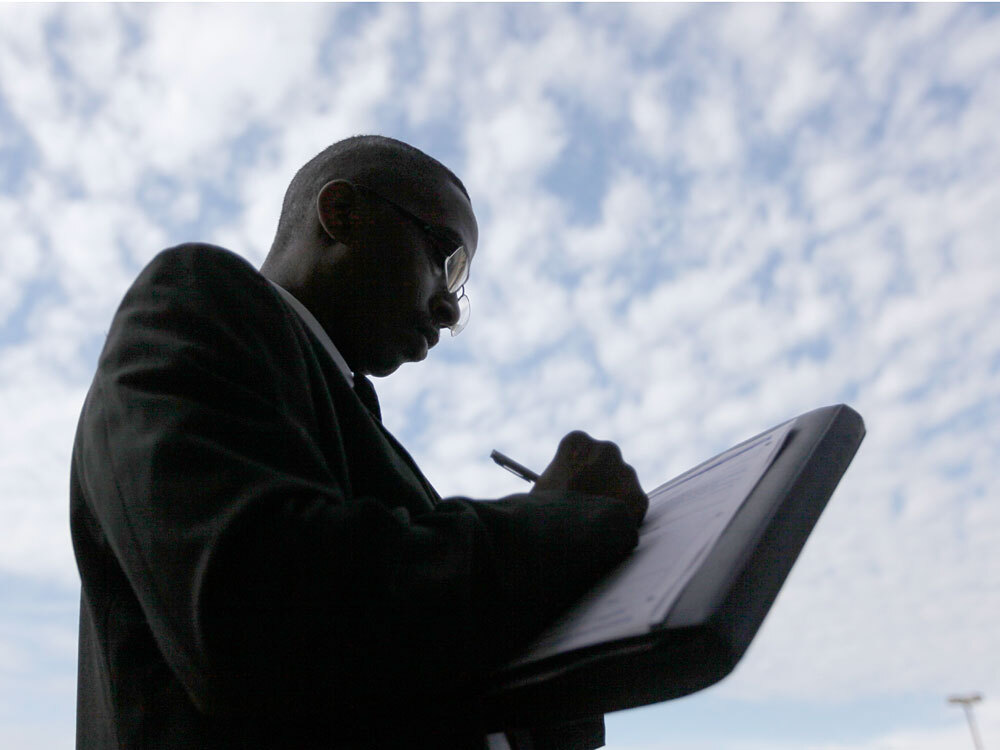 Melvin Winston fills an out application on Sept. 25 for positions at a new bar and restaurant in Detroit.

President Obama said Friday that his administration will do everything possible to put Americans back to work after September job cuts pushed the U.S. unemployment rate to 9.8 percent — the highest in 26 years.

"I want to let every single American know that I will not let up until those who are seeking work can find work," Obama said, calling a new unemployment report a "sobering reminder" of how fragile the economy is.

Obama said economic recovery comes "in fits and starts" — and employment is usually the last thing to improve after recession. He promised that his administration will continue to emphasize job creation.

Earlier, Vice President Joe Biden said the Labor Department report is evidence that the administration's economic policies have been a success. The stimulus package that pumped $787 billion into the U.S. economy earlier this year has saved and created 1 million jobs, he said.

The discouraging jobs report demonstrated that the severe economic downturn is continuing to make life difficult for many Americans, despite the belief of many economists that growth is resuming.

Most economists expect the unemployment rate to exceed 10 percent before it begins to drop some time next year. While Friday's news was disappointing, experts said things are improving.

"We're still losing jobs, but we're losing jobs at a slower pace. So the economy is getting less worse, I think, if you measure it strictly by employment," said economist Hugh Johnson, president of Johnson Illington Advisors LLC in Albany, N.Y.

Government jobs also declined, with 53,000 federal, state and local jobs being cut. Local governments, which have seen decreased tax revenue because of foreclosures, the business downturn and unemployment, cut the most, reducing their payrolls by 24,000 workers.

Health and education — considered to be the bright spots on the jobs horizon — added only 3,000 jobs last month.

Since the recession began, the ranks of the unemployed have swelled from 7.6 million to 15.1 million. But Johnson predicted that would begin to turn around between January and the end of March.

"My number-crunching says that some time in the first quarter employers will no longer be shedding jobs or eliminating jobs from payrolls, they'll start to add jobs, although at a very slow pace," he said.

Meanwhile, the Commerce Department reported that U.S. factory orders fell in August by the largest amount in five months. The report released Friday said demand for manufactured goods dropped 0.8 percent because of the decreased demand for commercial aircraft, which had soared in July.