Accessibility links
Suicide Blast Kills 5 At U.N. Food Agency In Pakistan A bomber disguised as a security officer detonated explosives in the lobby of the World Food Program's Islamabad headquarters Monday. The attack comes a day after the new leader of the Pakistani Taliban vowed fresh assaults, and as the Pakistani army readies what it describes as a decisive offensive against militants along the border with Afghanistan. 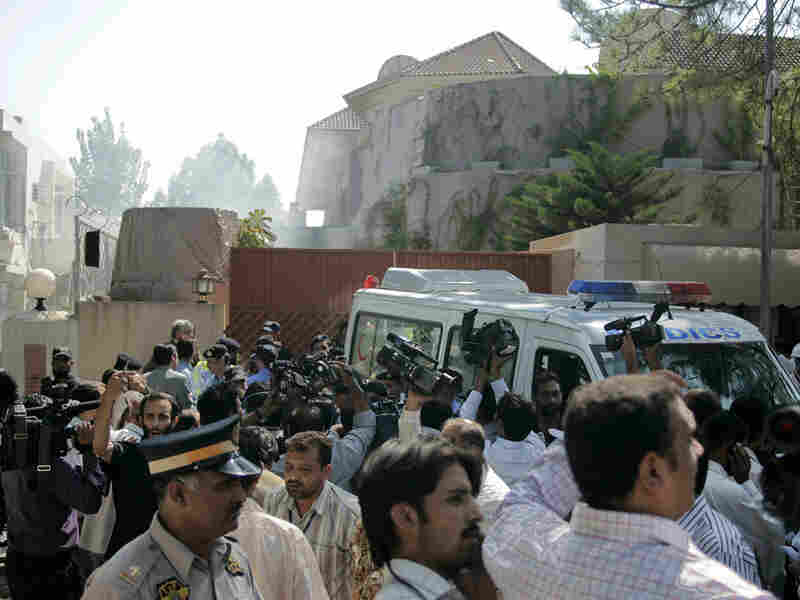 A crowd massed outside the offices of the World Food Program in Islamabad after an explosion on Monday. B.K.Bangash/AP hide caption 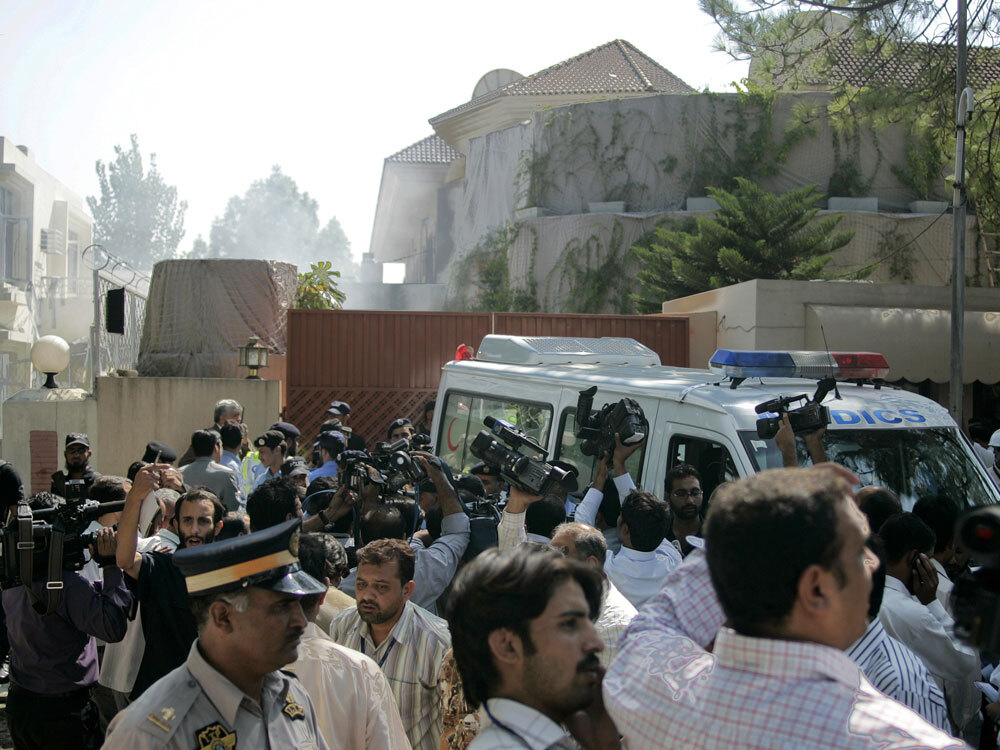 A crowd massed outside the offices of the World Food Program in Islamabad after an explosion on Monday.

A suicide bomber disguised as a security officer attacked the lobby of the U.N. World Food Program offices in Pakistan's capital on Monday, killing at least five people and wounding several others, witnesses and officials said.

The bomber passed through tight security to gain entrance into the office of the program's Islamabad headquarters. Police said the bomber detonated an explosive-filled vest in the heavily fortified building, where about 80 people were working.

"There was a huge bang, and something hit me. I fell on the floor bleeding," said Adam Motiwala, an information officer at the U.N. agency who was hospitalized with injuries to his head, leg and ribs.

Visitors to U.N. buildings in Islamabad are screened and patted down for weapons and explosives in secure chambers some distance from the building's entrance.

Video from a security camera broadcast on local TV shows the bomber walking through a door into what appears to be the main building. He is carrying a 2-foot-long cylindrical object in one hand. Seconds later, a bright flash fills the screen.

Interior Minister Rehman Malik said the attacker was wearing the uniform of the paramilitary Frontier Consabulary and asked a guard if he could go inside the building to use the bathroom. Once inside, he detonated 18 pounds of explosives.

Medical officials at two hospitals said five people had been killed in the attack, including an Iraqi working for the agency. The World Food Program said in a statement that two of the dead were Pakistani women. Several others were injured, two of them critically, it said.

There was no immediate claim of responsibility for the attack. Militants have carried out scores of suicide blasts in Pakistan over the past two years, several of them targeting foreigners and their interests. Under U.S. pressure, Pakistani security forces have recently had some success combating the extremists.

Witnesses said the attack left furniture overturned and windows blown out. The deputy inspector general of the police told reporters that security guards posted at the building had been taken in for questioning.

The World Food Program provides vital food assistance to millions of people in Pakistan. The United Nations said Monday that it has temporarily closed all its operations in the country.

"This is a heinous crime committed against those who have been working tirelessly to assist the poor and vulnerable on the front lines of hunger and other human suffering in Pakistan," U.N. Secretary-General Ban Ki-moon told reporters in Geneva. He added that the U.N. would continue to provide humanitarian assistance to the Pakistani people.

Anne Patterson, the U.S. ambassador to Pakistan, condemned the targeting of aid workers as an attack against Pakistani society. "Such cruel acts expose the true nature of the terrorists' agenda," she said.

The attack in Islamabad comes a day after the new leader of the Pakistani Taliban vowed fresh assaults — and as the Pakistani army prepares what it describes as a decisive offensive against Islamic militants in their stronghold of South Waziristan along the border with Afghanistan.

The bombing was the first such attack in Islamabad since June, when two police officers where killed. Another blast in June at a luxury hotel in the northwestern city of Peshawar killed two U.N. staffers and injured others.

On Sunday, the new leader of the Pakistan Taliban, Hakimullah Mehsud, met with reporters in the country's tribal areas for the first time since winning control of the militant group. He was flanked by other Taliban commanders in a show of unity, and the appearance ended speculation that he was killed in a leadership battle sparked by the August slaying of his predecessor, Baitullah Mehsud, in a missile strike.

Hakimullah Mehsud vowed to strike back at Pakistan and the U.S. for the increasing number of drone attacks in the tribal areas along the border with Afghanistan.

Mehsud spoke on condition that his comments not be published until the reporters left the area Monday, out of concern that their use of satellite phones to file the story could lead Pakistani forces to him.