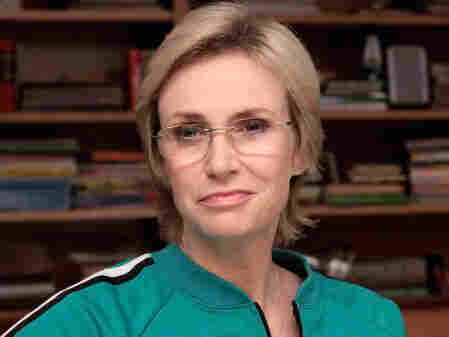 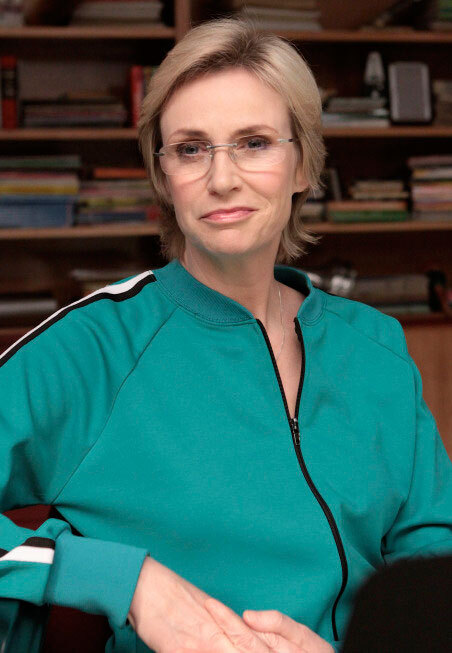 As Sue Sylvester on Fox's Glee, Jane Lynch plays a conniving, competitive cheerleading coach — who's quick to let the series' hero, glee-club adviser Will Schuester, know who's in charge.

Those are some of the adjectives Jane Lynch offers up when All Things Considered host Melissa Block asks her to explain Sue Sylvester, the hard-charging cheerleading coach Lynch plays on the Fox network's breakout fall comedy, Glee.

"This woman has no inner doubt," Lynch says. "She doesn't have much reflection going on."

That, and she's got a seemingly endless supply of track suits.

"It's a lot of fun," Lynch confesses. "It's like slipping into your pajamas when you go to work — I love it."

'Yes We Cane,' And Other Sociopolitical Solutions From Sue

Why Caning Is Underrated

On Glee, Sue Sylvester's ambitions aren't confined to her Ohio high school, where she terrorizes the show's scrappily hapless glee-club losers and brutalizes her Mean Girl cheerleader charges in pursuit of a national-championship trophy. ("You think this is hard?" Sue snarled at her straining squad of pyramid-builders in the series pilot. "Try being waterboarded — that's hard.")

No, in her quest for fame and dominion, Sue has also landed a regular commentary gig on the local TV station, where "Sue's Corner" becomes the venue for spirited defenses of caning — "Ask anyone who's safely walked the spotless streets of Singapore!" — and other less-than-PC positions. "Not everyone's gonna have the walnuts to take a pro-littering stance," she warns a nervous station manager carrying a tall stack of hate mail. "[But] it's why I pay taxes — it keeps garbage men earning a living, so they can afford tacos for their family."

You just want to take her home, don'tcha?

"She's not far from the surface, let me tell you," Lynch says — just slyly enough to invite the hope that she's joking — about whether there's a bit of Sue Sylvester under her own skin.

"I don't have to dig very deep to find that contemptuous strain in myself," she says. "I just wanna live in this society, and I wanna present well, so I keep that under wraps. But boy, when I put on that track suit, it comes out."

From Fencing To Improv, To 'I Will Haunt Your Dreams'

Thoughts On Tight Comedy Writing (And When To Improvise)

A Peek Into Sue Sylvester's Future

Lynch studied theater in the masters program at Cornell University, where the training involved close analysis of everything from Shakespeare to Sam Shepard and physical training in disciplines from dance to fencing.

"That's great for strength and coordination," she says of the latter. "It is really a physically and mentally demanding sport; it's a great way to train an actor to get out of being just a nodding acquaintance with their body."

(And yes, Lynch can see Sue Sylvester fencing: "I would love to challenge someone to a duel," she says. "I'd probably poison the tip of my foil.")

Though she's worked in a few off-the-cuff one-liners — the waterboarding crack was one — the tightly scripted Glee doesn't offer Lynch as many opportunities for improvisation as she's found in, say, her work in the mockumentaries of Christopher Guest (Best In Show, A Mighty Wind) or the bad-boy comedies (Walk Hard and Talladega Nights) from the Judd Apatow factory.

And improv is in Lynch's blood: After grad school, she toured with Chicago's famed Second City troupe, where Steve Carell, Amy Sedaris and Stephen Colbert were also honing their chops around the same time.

"It was one of the many resumes I sent out that week," she says wryly, "and it was the only one that bit." That struck her as odd, because a comedy career wasn't what she had planned. 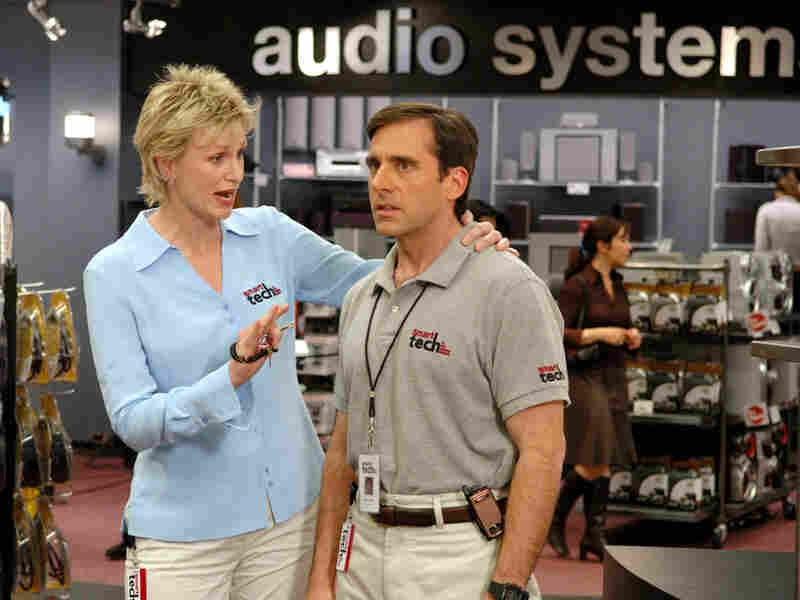 In The-40-Year-Old Virgin, Lynch plays a blunt, hypercompetent AV-store manager named Paula — whose can-do attitude goes so far that she offers her "personal services" to Andy (Steve Carell), who's on a mission to lose his virginity. Universal Pictures/Kobal Collection hide caption 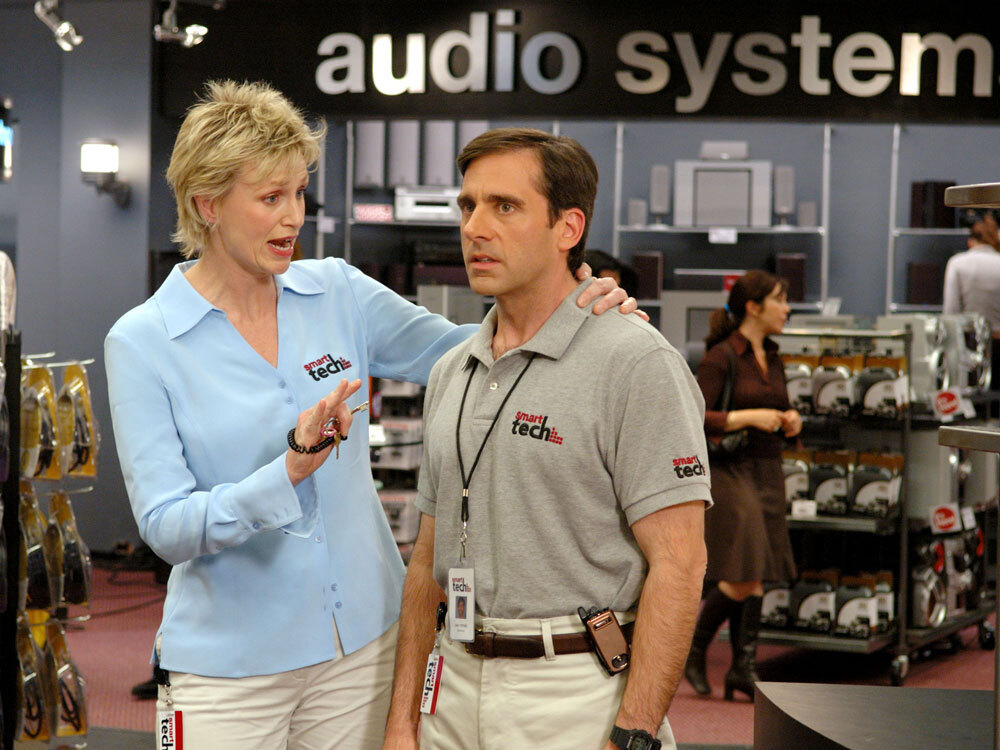 In The-40-Year-Old Virgin, Lynch plays a blunt, hypercompetent AV-store manager named Paula — whose can-do attitude goes so far that she offers her "personal services" to Andy (Steve Carell), who's on a mission to lose his virginity.

"I always ended up having the funny part in Shakespeare," she admits, "but I really thought I'd be doing theater. That was my ambition for myself."

But at Second City, she fell in love with sketch comedy — "that's a different kind of improv than I do with Christopher Guest; this is kind of 'let's-get-to-the-joke-real-fast' " — and discovered that it was a form that let her indulge her love of singing without necessarily having to be great at it.

The Second City connection paid off later, too: It got Lynch her role in Apatow's The 40-Year-Old Virgin, playing an alpha female among a crew of sex-mad chauvinist man-children. That's where she delivered the line that burned her forever into the brains of countless arrested-adolescent males: "I'm very discreet," she tells Steve Carell's hapless hero, offering to relieve him of his titular status — "but I will haunt your dreams."

Settling In, With 'Glee,' Where It Feels Like Home

Until Glee came along, that tasty little supporting turn in The 40-Year-Old Virgin was one high-water mark in a career that's featured a ton of juicy character parts and guest appearances — so many that Lynch herself can't always remember them all. Once, channel-surfing, she happened on an episode of a certain coarsely funny sitcom about a certain Bundy family, and ...

"All of a sudden a very young version of myself walked out of a hotel room and said, 'You must walk my Winky,' " Lynch says, laughing. "And I went, 'Oh, my God.' I was talking about my dog, but of course the double-entendre can't be denied. So that was like, 'Oh, jeez,' and I went back in time and realized, 'Yes indeed, I have done a Married With Children.' "

After such a crazy-quilt career, Lynch says, it's something of a relief to settle into a solid, substantial part for a change.

"I wanted to do something where I could hang my hat," Lynch says. "The nature of the work I've done lately has been three or four days here, there, and I travel a lot. I haven't had a character arc — I've basically just had scenes here and there. So when I got the opportunity to do Glee, I was absolutely thrilled. They've given me a life, they've given me a back story; the character gets affected by things."

Affected, but not changed — not too much.

"No, no no no," Lynch says. "There will be no changing and evolving or growing. There will not be a lot of ... hugs given, at any point, by Sue Sylvester."

Lynch herself, though, will admit to embracing the change that comes with being a central player in a show whose recent ratings suggest it might have some staying power.

"It's really fun to come to the same place to work every day," she says. "I've brought a pillow. And I have a candle in my trailer. You know, a blow dryer. And a little coffeemaker. It's really nice to set up shop — I'm really glad to be home, and I hope this lasts a good long time."