Accessibility links
Democrats Force Changes In Baucus Health Bill The health overhaul bill expected to emerge this week from the Senate Finance Committee was supposed to be the one to win at least some Republican backing. But committee Chairman Max Baucus ultimately found himself scrambling to win the backing of enough Democrats to get the bill through. 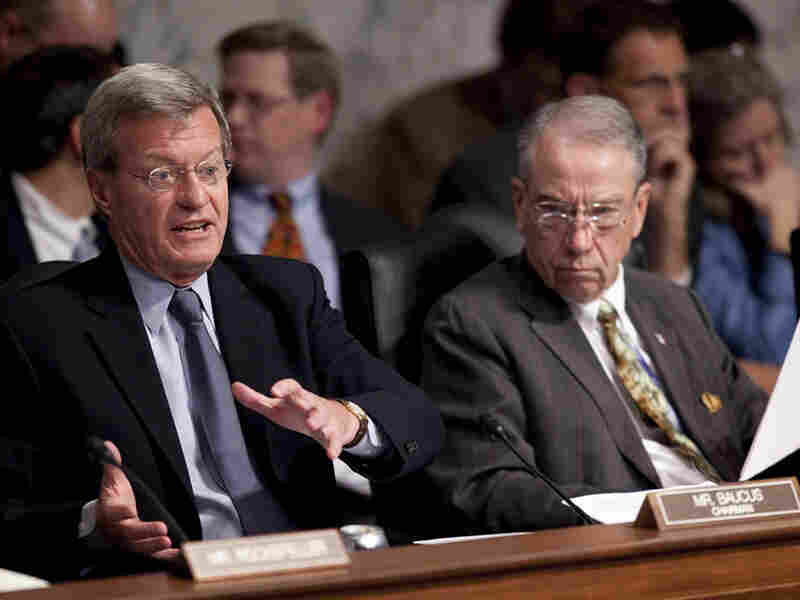 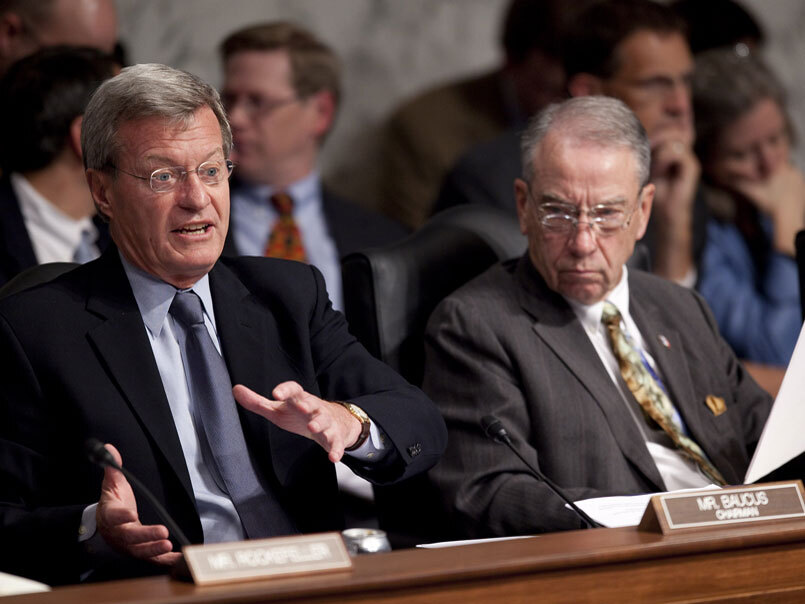 Senate Finance Committee Chairman Max Baucus (left) has had to make concessions on health care legislation to placate fellow Democrats. But those changes have angered Republicans like Sen. Chuck Grassley of Iowa.

The health overhaul bill expected to emerge this week from the Senate Finance Committee was supposed to be the one to win at least some Republican backing. But committee Chairman Max Baucus ultimately found himself scrambling to win the backing of enough Democrats to get the bill through.

As the committee wrapped up its formal debate around 2 a.m. last Friday, its top Republican, Iowa's Chuck Grassley, pronounced the verdict Baucus least wanted to hear.

The bill Baucus originally brought to his committee three weeks ago was mostly the product of months-long negotiations between three Democrats on the committee and three Republicans. In order to try to win some of those Republican votes, Baucus made many concessions, some of which made Democrats furious.

One big one: The bill would have eliminated the government's popular Children's Health Insurance Program for many children, instead making them eligible for subsidized private insurance through new insurance exchanges. That didn't sit very well with people such as West Virginia Democrat Jay Rockefeller, who helped create the CHIP program.

"Children have special requirements, special medical needs," he said. "And it's set up to give them those medical needs. And if you throw them into the exchange, which is the farmers market of all the private insurance companies competing with each other ... how are they going to know what they're going to get?"

The proposed change to CHIP also alarmed children's and other health-advocacy groups that spent much of the past two years working to get the program renewed.

What makes CHIP so valuable to moderate-income families is that they don't have to pay very much for the coverage, says Bruce Lesley, who heads First Focus, a bipartisan group that works on issues related to children and families.

"Children are only exposed in CHIP to about 2 percent of the cost of the coverage," he says.

His group commissioned a study to see what would happen if children were switched to private insurance. Lesley said the difference would be dramatic.

"Children would be exposed to between 20 and 30 percent of the cost of the plan," he said. "So the out-of-pocket costs in reform would have been 10 to 15 times higher; so kids would have been left worse off."

Armed with that information, Rockefeller drafted an amendment to put those children back into the CHIP program. It passed last Thursday night with the votes of all but one Democrat. Olympia Snowe of Maine, the only Republican considered a possible vote for the bill, was the sole Republican to vote in support of the amendment.

The change infuriated other Republicans.

"This is contrary to everything we've been working for," Grassley said.

That was just one of several changes Democrats forced Baucus to make. Other changes decreased the penalties for people who don't buy coverage under the so-called individual mandate, and gave states the option of creating a new type of plan for low-income people who earn too much to qualify for Medicaid.

Rockefeller, one of the panel's more liberal members, hasn't promised yet to vote for the bill. But he says he's a lot happier with it than he was.

"I do feel better," he said. "It bodes better, I think, for good solutions."

The changes made during the nearly two weeks of amending the bill appear to have solidified enough support to get the bill through the Finance Committee. Whether it will be enough to get a bill through the full Senate is a battle for another day.