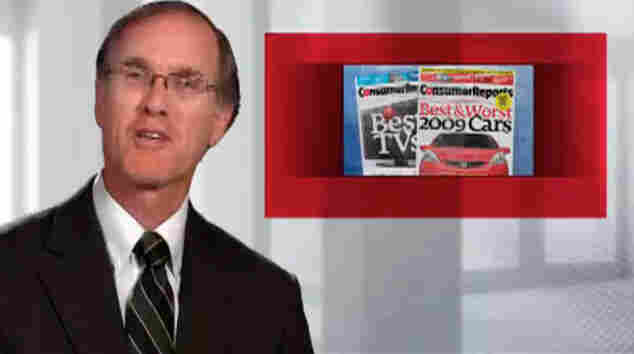 In a historic step this week, the nonprofit Consumers Union, which publishes Consumer Reports magazine, unveiled the first television advertisement in its 72-year history: a spot that encourages Congress to overhaul health care this year.

The 30-second advertisement, which features Consumers Union President and Chief Executive Officer James A. Guest, puts the reputation and clout of the iconic consumer empire firmly behind fundamental change to the way Americans are insured and receive their health care.

The commercial, Guest said in an interview with NPR, simply expresses what he and Consumers Union have been advocating since its founding, though the ad has rankled some subscribers who say they view it as an unnecessary entry into the political fray.

Guest, however, says pushback has been minimal, and his organization's leaders were united in their decision to release the ad.

"We've seen all the partisan bickering and ads from pharmaceutical and health care organizations," he says.

"We want to emphasize the consumer voice and underscore that when it finally comes down to it, the ultimate constituent is the consumer," he says. "It seems like this is really the moment when reform can pass."

In the gallery of power players shaping efforts to overhaul the nation's health care system, Guest has managed to remain unfamiliar to most Americans.

But as head of Consumers Union, his influence can't be underestimated: Consumer Reports magazine has 4.2 million subscribers, and its associated Web site has 3 million paid subscribers — the most of any Web publication in the nation.

"They have tremendous reach," says Sally Greenberg of the National Consumers League, which also has endorsed a health care overhaul.

Guest is ranked 11th on the hospital trade magazine Modern Healthcare's list of the 100 most powerful people in health care — just ahead of Bill Gates and House Speaker Nancy Pelosi. In his straightforward television advertisement, he urges Congress to reform health care "for everyone's sake."

The ad will air in the Washington area over the next two weeks, while Congress continues to negotiate and debate a final version of a health care overhaul bill to send to the president. The total ad buy, the organization says, is under $200,000.

In the commercial, Guest asserts that health care costs too much and that "many Americans are one pink slip or one major illness away from losing their coverage."

"Washington," he says, "the time for health care reform is now."

The same day he unveiled the ad, the research arm of Consumer Reports released the results of a national survey that it says reveals a nation increasingly worried about the cost and potential loss of its health care coverage.

The survey found that the loss or reduction of health care benefits had left more than 25 percent of those surveyed unable to pay for medical bills or medications; 20 percent or more delaying medical tests and procedures or not filling prescriptions; and 15 percent using expired medications or skipping a dose.

The advertising campaign and the concurrent release of the poll prompted criticism from a handful of conservative bloggers and subscribers who say that the organization has abandoned its nonpartisan stance for a political one.

Some threatened to cancel their subscriptions if, as one wrote on the Consumer Reports Web site, "this political activism continues." Others said that the advocacy organization should stick to its tradition of rating products --- from home appliances and cars to electronics and cleaning supplies — with side-by-side comparison testing.

But the decision by Guest to air the advertisement should come as no surprise to anyone who has been even a casual reader of Consumer Reports.

Or to anyone who has followed Guest's growing influence in the health care overhaul movement.

Guest is a former Capitol Hill staffer for Sen. Edward Kennedy, the Massachusetts Democrat who fought for universal health insurance coverage until his death in August. Under Guest's leadership, Consumer Reports expanded just over a year ago, with a health care ratings center that compares hospitals, drugs, devices and consumer experiences.

The magazine published a six-part investigative series on uninsured and underinsured Americans. And over the past year, the organization's advocacy arm has dispatched employees in an RV to collect health care stories across the country.

"We've also been advocating for the last five years to get hospitals to release their infection rates," Guest says. "All the way through, we've been engaged."

After all, Guest says, Consumers Union first came out in favor of health care reform back in 1939, taking the position that everybody in the country ought to have insurance coverage.

'You Have To Have An Opinion'

David Burda, editor of Modern Healthcare magazine, says that an organization like Consumers Union has, in this climate, an obligation to weigh in on heath care.

"Everyone has a stake in the outcome of this," Burda says. "It's going to touch everybody, and you have to have an opinion. To not have one is an unacceptable spot to be in."

Especially, he says, for any consumer organization.

And with high-stakes negotiations on Capitol Hill accelerating, Guest's decision to weigh in — and in such a public way — could move the discussion, or at least public opinion, to a certain degree.

"Groups like his bring a certain transparency and accountability to the industries they cover," he said. "And he is a person of influence."

Guest dismisses criticism of the advertisement and the poll.

"We've spoken out on policy issues forever," he said, ticking off his organization's involvement in credit card reform and food and drug safety legislation. Its advocacy has also including air bags, child car seats and removing lead from paint.

So what does Guest want to see in a health care bill, from a consumer perspective? A public insurance plan to compete with private plans; changes in the doctor reimbursement system to stress quality, not quantity; a sliding payment scale based on ability to pay; and better consumer information on medications and treatment.

"We think it's just wrong that the sickest have the hardest time getting and keeping insurance," he says, before expressing optimism that a comprehensive overhaul is still possible.

"There are still many innings left in the game," Guest says.

And he, no doubt, will remain a player.