Accessibility links
In Pakistan, U.S. Aid Package Stirs Anger An emotional debate is under way in Pakistan over a U.S. plan to provide the country with $1.5 billion in economic aid for each of the next five years. Many Pakistanis view the plan, approved by Congress last week, as U.S. interference in their internal affairs. 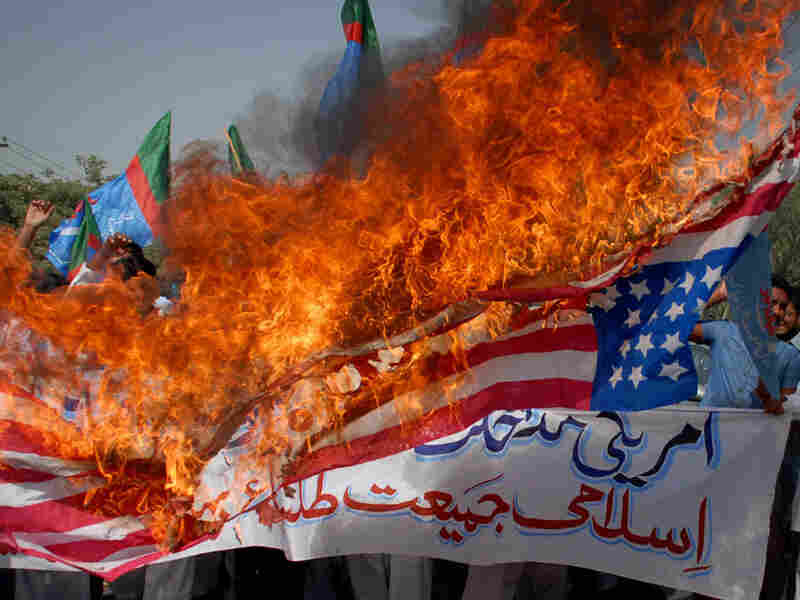 Protesters rally against the U.S. in Multan, Pakistan, on Wednesday. The country's leaders are jousting over a multibillion-dollar U.S. humanitarian aid bill, which critics say will lead to greater American interference in Pakistani affairs. Khalid Tanveer/AP hide caption 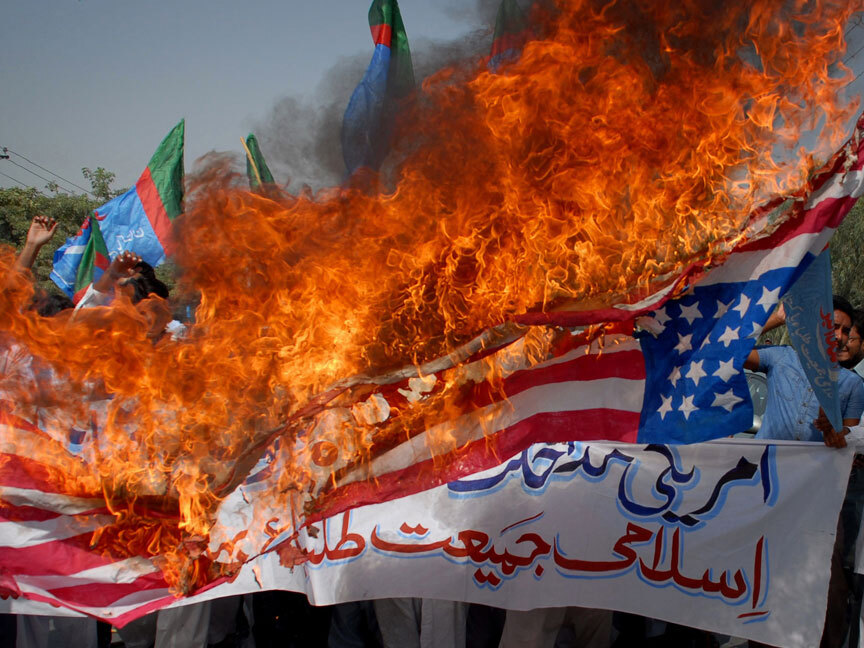 Protesters rally against the U.S. in Multan, Pakistan, on Wednesday. The country's leaders are jousting over a multibillion-dollar U.S. humanitarian aid bill, which critics say will lead to greater American interference in Pakistani affairs.

Pakistan's military expressed concern Wednesday about a multibillion-dollar U.S. humanitarian aid package planned for the country, adding to the debate raging in Pakistan over the money.

Under the measure, which the U.S. Congress approved last week, the United States would provide $1.5 billion to Pakistan for each of the next five years. But many Pakistani lawmakers are denouncing the package as a sellout to the Americans.

The Daily Ausaf, a major Urdu-language newspaper, described the assistance provided under the Kerry-Lugar bill, as the legislation is known, as "a sweet poison." At sermons during Friday prayers last week, some clerics assailed the bill as enslavement.

Hafiz Muhammad Saeed, the leader of Jamaat-ud-Dawa, suggested that the U.S. wanted to control Pakistan's nuclear program, its army and jihadists like him and his followers. His Islamic charity is believed to be a front for the banned militant group Lashkar-e-Taiba, accused in last year's attacks in Mumbai, India.

"The enemies of God are closely watching us and putting conditions on us," Saeed warned. "Remember, these bills are not going to solve our problems, but multiply them."

Concerns Over The Measure

For the United States, it might sound like a case of no good deed going unpunished. The Kerry-Lugar bill seeks to undo what it calls disproportionate emphasis on security-related assistance. In the hope of building mutual trust, the U.S. has shifted focus to alleviating poverty, building schools and hospitals, and deepening democratic and civilian institutions after the nine-year dictatorship of Gen. Pervez Musharraf.

But Ahsan Iqbal, spokesman for the largest opposition party, the Pakistan Muslim League-Nawaz, says that while his party appreciates the spirit of what the Obama administration is trying to do, the result is an intrusion on Pakistan's sovereignty.

"The bill categorically states that Pakistan will cease to support terrorism and cease to indulge in acts of terrorism," he says. "Now that is an indictment."

The controversy over Kerry-Lugar has deepened already fierce anti-American sentiment in Pakistan, much of it due to resentment over the U.S.-led war on terrorism that many believe is worsening Pakistan's own security. But Iqbal says his opposition party is not interested in stoking anti-Americanism or in destabilizing the government of President Asif Ali Zardari.

"The choice is whether this friendship is based on equal respect where people perceive this friendship to be in the interests of both countries, or it is seen as one-sided friendship where Pakistan is used as a proxy state," Iqbal says. "That is the choice."

Pakistan's top military commanders issued a terse statement Wednesday expressing "serious concerns regarding clauses impacting on national security," unusual public criticism of the U.S. efforts. Kerry-Lugar authorizes only "such sums as may be necessary" for military aid — no specified amount.

"The United States has exposed this government to a lot of internal pressures, and if these pressures are not really dealt with effectively it can get weaker," Rizvi says. "In fact, it has again provided the military an opportunity to decide the fate of this government."

Pakistan's powerful military may be signaling to the public that it is not taking orders from Washington, and the government tried to do the same Wednesday. Scrambling to defuse the mounting pressure, Prime Minister Yusuf Raza Gilani took to the floor of parliament and attempted to pacify the anger over the Kerry-Lugar bill.