Accessibility links
North Korea's Kim Jong Il Reasserts Control The regime of North Korean leader Kim Jong Il appears to be rolling back reforms and putting succession plans on hold. Speculation has been swirling about whether the ailing Kim has anointed his youngest son as successor. But, as NPR's Louisa Lim reports — after a rare five-day visit to North Korea — Kim Jong Il now is back on center stage.

NPR's Louisa Lim has just returned from a rare five-day visit to North Korea, where her movements were strictly controlled and monitored.

North Korea is one of the least-visited countries on Earth, and for months, diplomats, analysts and spies have been trying to understand what's happening here. Speculation has been swirling about whether ailing leader Kim Jong Il has anointed his youngest son as successor.

On our first night in Pyongyang, karaoke girls in the restaurant sang a jaunty song. "Socialism is our thing," they sang, beaming, "since the people chose it, and socialism makes people's lives a paradise."

That boundless, blind confidence set the tone for this heavily stage-managed trip. This was a visit designed to show North Korea as it would like to be seen.

Cult Of Personality And The Succession Question

Our first stop was a 60-foot bronze statue of the country's founder, Kim Il Sung, where lines of drably dressed Koreans bowed and placed bouquets at his feet.

"Every morning I come here and pay my respects," said our guide, Kim Hyang Mi, reverentially, calling the site one of the most sacred places in North Korea.

The statue was our introduction to the personality cult of Kim. He towers over Pyongyang, where he is omnipresent despite his death 15 years ago. There are an estimated 140,000 monuments to Kim around the country, and his face still looks out from numerous propaganda billboards. 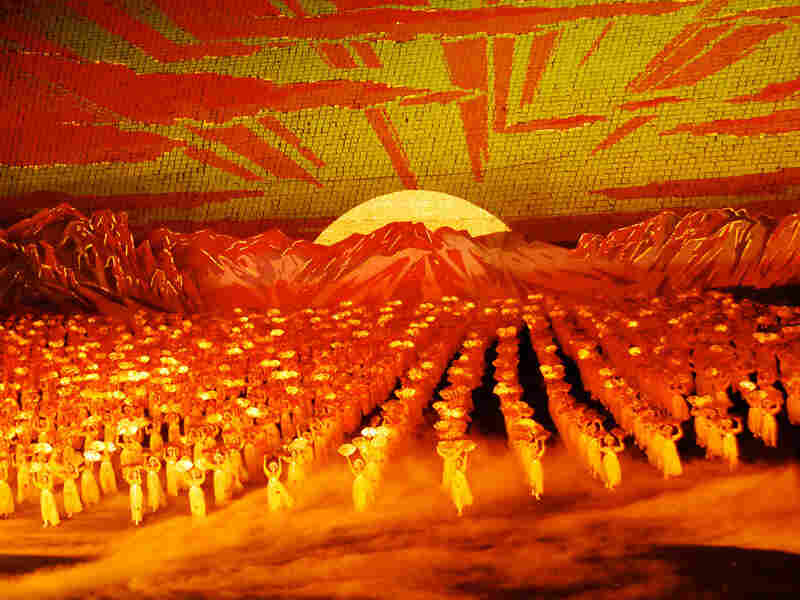 Tens of thousands of North Koreans are taking part in the months-long Arirang Mass Games — a celebration of the birth of Kim Il Sung. Dancers perform on a stadium field while schoolchildren in the stands behind them flip cards to create a moving backdrop. Melanie Ham hide caption 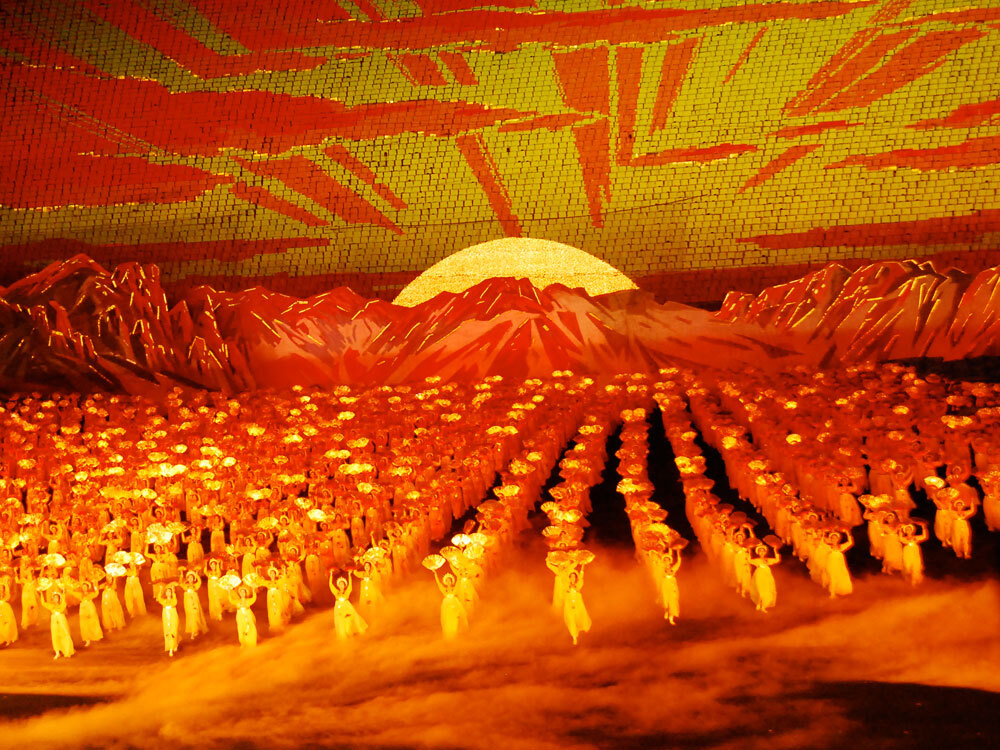 Tens of thousands of North Koreans are taking part in the months-long Arirang Mass Games — a celebration of the birth of Kim Il Sung. Dancers perform on a stadium field while schoolchildren in the stands behind them flip cards to create a moving backdrop.

From that point on, we were spun around monument after monument erected to glorify the man known as the "Great Leader" and his son and successor in this hereditary communist dynasty, the "Dear Leader," Kim Jong Il. Last summer, the 68-year-old was reported to have suffered a stroke, sparking concern about his succession. But in Pyongyang, no one talks about that.

Instead, in vast Kim Il Sung Square, tour guide O Kum Sok talked about one of the happiest days of his life — the day he took part in a parade, marching through this square holding a blazing torch.

"I feel so excited," he said. "You know why? You get a chance to see the 'Dear Leader,' Comrade Kim Jong Il. So exciting."

But among the elite, the rumors swirl about another display of loyalty: a spectacular fireworks extravaganza held in April that is said to have been orchestrated by Kim Jong Il's favored successor, his youngest son, 26-year-old Kim Jong Un.

His name is now widely known in North Korea compared with a year ago, but it's not mentioned in public. During our five days in the country, only one person directly answered a question about the man known as the "Young General." That was Kim Sun Hee, a state-sponsored artist who has spent six months painstakingly capturing the fireworks display on canvas.

"If the 'Young General' Kim Jong Un organized these fireworks, it [captured] all the minds of all the people," she said, echoing an idea much repeated here — of "single-hearted unity," melding the minds of the leader, the party and the masses.

These days, his father, Kim Jong Il, is firmly back in control, apparently recovered, though sleeker after his illness. Five days ago, he was seen bear-hugging Chinese Premier Wen Jiabao at a lavish welcoming ceremony at the airport. Some observers, such as Leonid Petrov, a North Korea expert at the University of Sydney, now believe his succession has been put on hold.

"Kim Jong Un has in the past months got great popularity among the younger representatives within the army, within the party, as opposed to the old guard," says Petrov. "Here, we can see a sort of brewing conflict, which at the moment is not visible, but within the elite they probably detected some signs of interest in reform, change, experimentation. And I think Kim Jong Il decided simply to put it on hold. The family is not interested in any change." 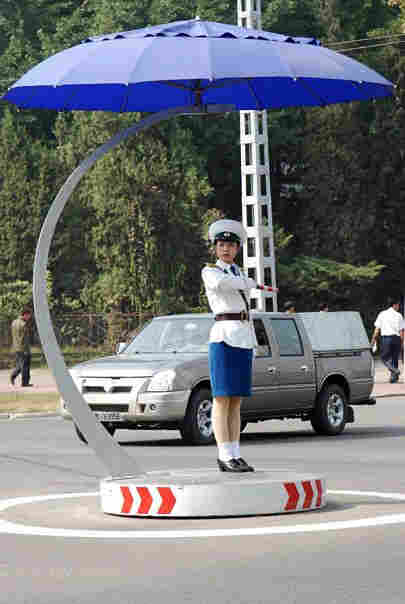 Women, not lights, control traffic in Pyongyang. The female traffic directors stand in demarcated circles in the middle of intersections, and some have umbrellas to shade their faces. Melanie Ham hide caption 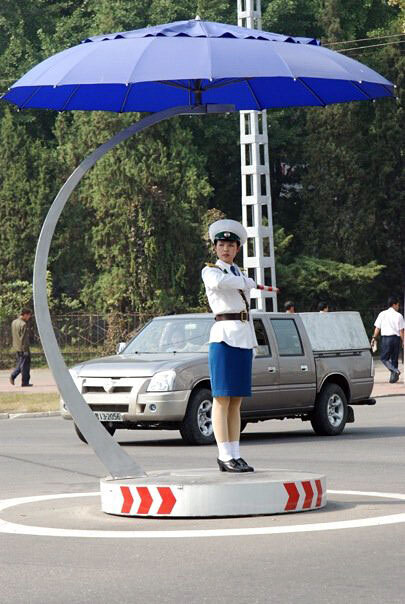 Women, not lights, control traffic in Pyongyang. The female traffic directors stand in demarcated circles in the middle of intersections, and some have umbrellas to shade their faces.

Moves toward economic liberalization, too, are being rolled back. This spring, North Korea aired its first television commercial ever, for Taedonggang beer. That ad was shown for a few weeks, but it is no longer running.

The authorities also have tightened controls on local markets. Their opening hours have been cut, and efforts are reportedly being made to restrict market trading to older women only, thereby forcing men and younger women to return to state-run work units instead of engaging in market activities.

Petrov says the regime is clamping down on private enterprise, driving it underground.

"Back in 2003, Pyongyang looked like one big market. Now, we can see there's no trade on the streets. Trade and market and commercial activity is deemed to be something ideologically contaminating, something alien to the very nature of socialist society," he says.

To reassert political control, a series of mass mobilization campaigns is under way, encompassing ideological education, the market crackdown, urban beautification and a drive to increase production. The wider focus is now on building a great, prosperous and strong nation by 2012, the centennial of Kim Il Sung's birth.

To this aim, loudspeakers play rousing music, while street banners trumpet the latest "100 day campaign," which was launched days after the "150 day campaign" ended. Guide Kim Hyang Mi is confident of this latest campaign's success.

"It means within 100 days, we'll have rapid progress in economy, culture and everything," she says.

These campaigns were featured in an event of the Arirang Mass Games, the highlight — and eeriest part — of our visit. Tens of thousands of performers danced in perfect unison. Behind them, thousands of schoolchildren flipped colored cards simultaneously, creating a living backdrop glorifying the regime's achievements. Control and discipline is all; the individual is entirely subsumed by the masses.

This astonishing display serves to keep people busy in the run-up to 2012, distracting them from daily hardship or dissent. For with reforms reversed, it appears North Korea is rolling back the clock, as it looks toward the future.