Accessibility links
A Retailer's Journey Ends With Liquidation With the stress of operating a retail business during the Great Recession, Bowl & Board owner Mark Giarrusso made the tough decision to liquidate instead of reorganize. The decision comes after a yearlong fight to keep the chain of New England housewares stores afloat. 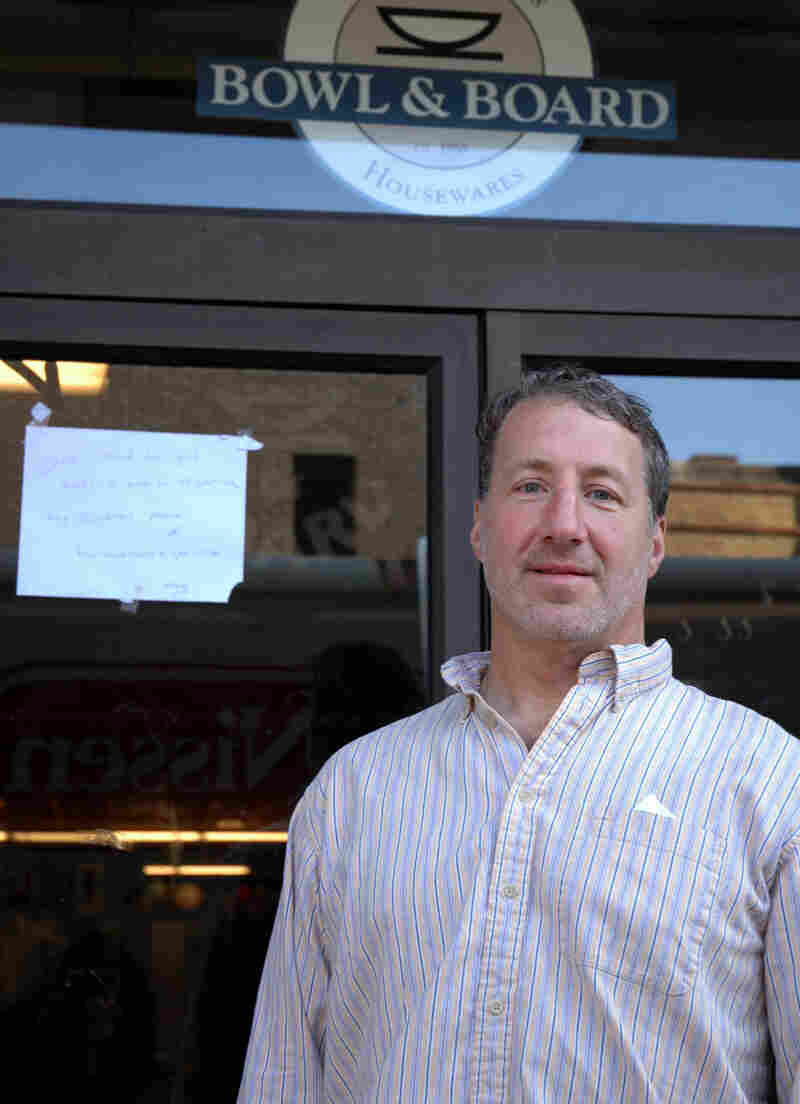 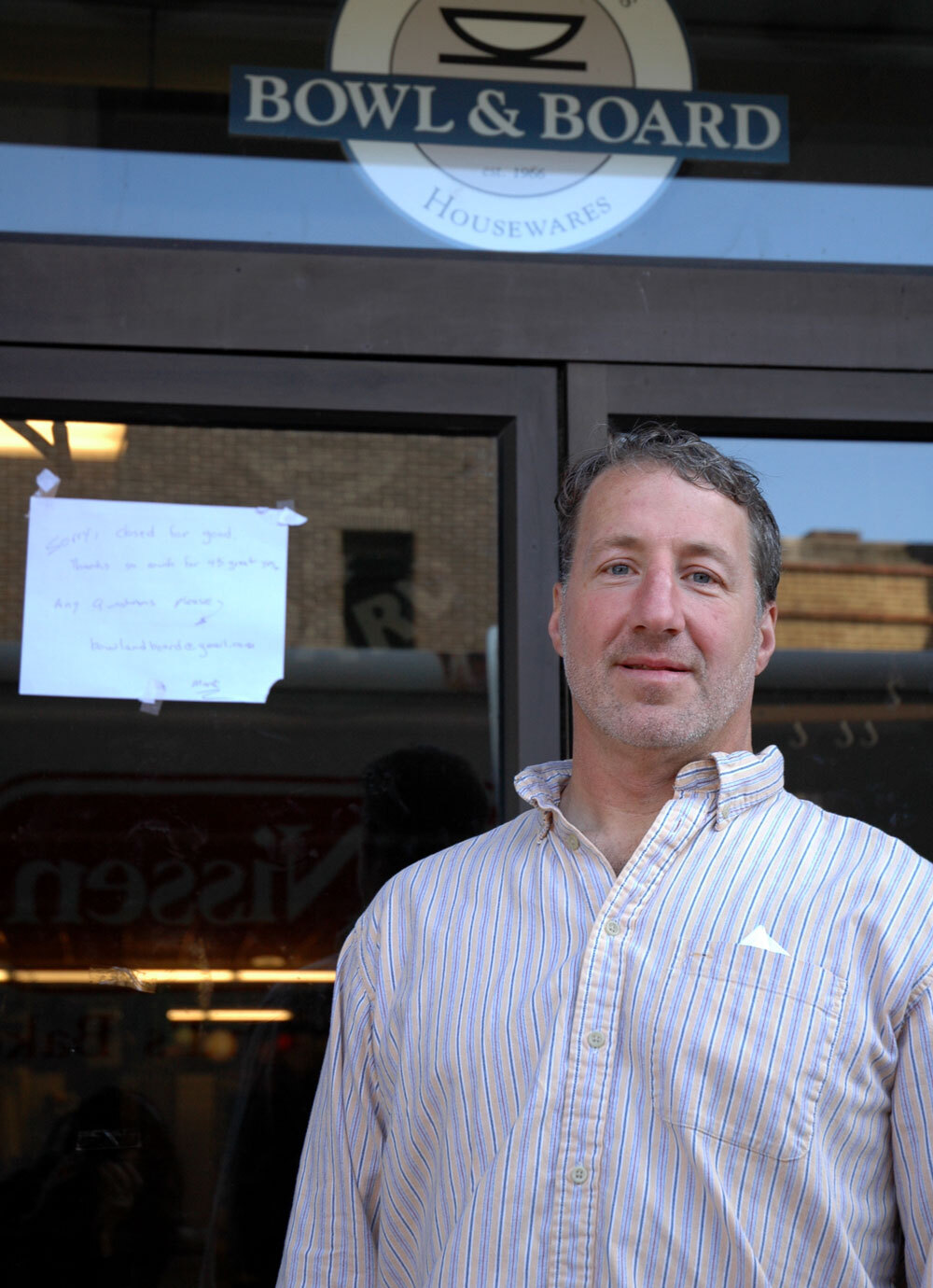 After months of legal negotiations with his landlord, Bowl and Board owner Mark Giarrusso recently converted from Chapter 11 bankruptcy protection to Chapter 7 liquidation.

NPR's Tovia Smith is following the economic fortunes of Bowl & Board, a family-owned chain of housewares stores in New England. This is her seventh story about the business. Read the series here.

It's pretty safe to say there was no one who was more excited about the back-to-college rush this fall than Mark Giarrusso.

"This weekend could be a phenomenal weekend," he says in mid-August. "I'm fired up."

Typically, the back-to-school season is Christmas for Giarrusso, who does most of his business selling students and 20-somethings everything from shower curtains to kitchen tables. But he has been teetering on the edge since last year, when he fell behind on rent in his Brookline, Mass., store, and his landlord sued him, forcing him into bankruptcy protection. For months now, Giarrusso and his attorney Martin Desmery have been in and out of court, fighting the landlord's lawyer who's trying to force Giarrusso to liquidate.

But Bowl & Board manages to survive each court date. And Giarrusso gets the judge's OK to keep working on a reorganization plan while operating his other two stores in Somerville, Mass., and Providence, R.I.

In the middle of summer, Giarrusso says: "We're chugging and plugging." This time of year is historically his slow season, so he's using his time to work on ways to cut costs.

The landlords in Somerville and Providence have both already agreed to defer some rent until next year. Giarrusso is also trying to nail down deals with a sandwich shop and another merchant to share his retail space and help with the rent. He's also exploring doing some moonlighting to earn extra cash.

"I've got a whole lot of balls in the air," he says. "I've got to get something to land to survive. Because it all comes down to the rent." 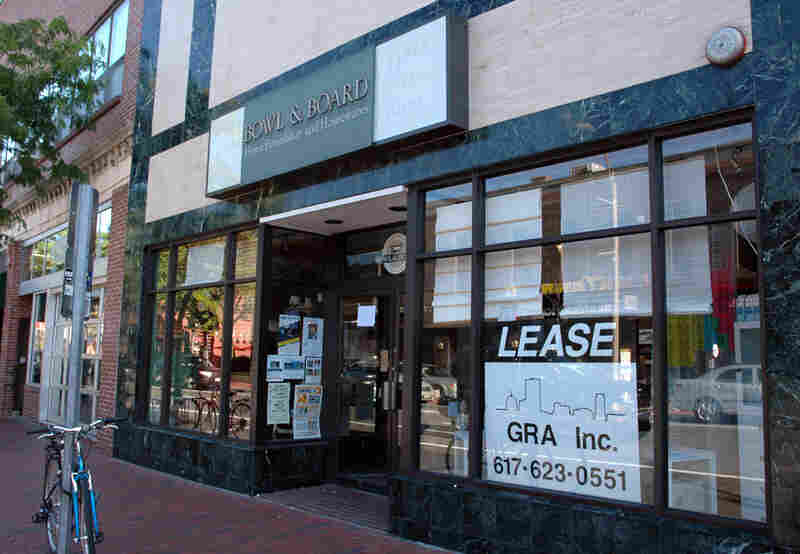 After declaring bankruptcy, Giarrusso was immediately locked out of his store. Tovia Smith/NPR hide caption

After declaring bankruptcy, Giarrusso was immediately locked out of his store.

About a month before his reorganization plan is due, Giarrusso gets a big break. The landlord from Brookline who sued him has finally softened and is willing to make a deal on the back rent. The landlord is asking for a monthly payment and about $18,000 up front.

Giarrusso immediately begins to try to raise the money. With no funds of his own and with no bank willing to lend him the money, he reluctantly turns to his family for help. His dad, who started Bowl & Board 44 years ago, says he is willing to put up some cash. It weighs on Giarrusso heavily, and he hesitates but finally agrees to take a loan. It starts to look like the business might actually make it — as long as the back-to-school crowds show up.

By late August, Bowl & Board has restocked its shelves, and the store starts to get busier. But he's still not ringing in the sales the store needs.

"There's a lot of people around," says Giarrusso. "But they're not shopping."

College seniors Melissa Vierra and Megan Bodajla buy one soap dish and promise to return for a shower curtain. Every year they look forward to a mini shopping spree to decorate their dorm rooms. But this year Vierra says she brought towels from home: "There will definitely be a lot of borrowing from family, like silverware, and cups and plates."

By early September, Giarrusso decides to run a few more sales. It does give him a boost, but it still doesn't draw in the kind of traffic he needs.

Just days before he's due back in court to file his final reorganization plan and formalize the loan from his father, Giarrusso gets cold feet.

"I was in 'go' mode, driving hard and fast," he says. He had just installed new lights in the store and ordered new merchandise for Christmas. But when push came to shove, he wasn't confident enough that his business was going to rebound and couldn't risk going forward.

"I was looking to borrow money," he says. "I had to be sure [I could survive] or I wasn't going to take the money. No way."

So instead of filing his reorganization plan, Giarrusso signed papers converting Bowl & Board from Chapter 11 bankruptcy protection to Chapter 7 liquidation.

"It's sad," Giarrusso sighs. "But in my conscience, the game had to be turned off."

The limbo and the stress of the past year is finally over. And he says it's "a bit of a relief."

After declaring bankruptcy, Giarrusso is immediately locked out of his store. In the minutes before his computer system is shut down, he manages to blast a quick e-mail to his customers

"Our family is grateful to the vendors, shoppers, artisans and staff for a very good ride," he writes.

It's not the happy ending he was looking for. But it's not a tragic ending either. Giarrusso says he was most concerned about avoiding an even worse scenario, where he might have gone down hard, and he might have taken his father or others down with him.

"If I kept going further, it was going to get worse," he says.

Still, it's a hard thing for Giarrusso to come to terms with. As an avid athlete and coach, he is loath to be seen as giving up.

"You don't quit!" he says. Instead, he makes the analogy to a thunderstorm. "That's the only time I would walk off the field — in thunder and lightning," he says. "Someone could get hurt really bad. It's just irresponsible to keep [going]. And I wasn't going to do that."