Accessibility links
Alton Brown: 10 Years Of 'Good Eats' The Food Network show is not your typical cooking show — it's more of a mix of MacGyver, Mr. Wizard and History Rocks. As the show celebrates its 10th year, Brown talks about looking back to the past for his new book, Good Eats: The Early Years. 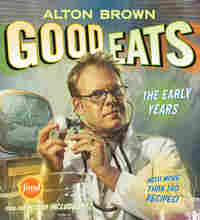 Check Out A Recipe For No-Pan Pear Pie

Good Eats has become a staple on the Food Network, but it's not a typical cooking show. Alton Brown created the Peabody Award-winning program to be a mix of MacGyver, Mr. Wizard and History Rocks.

When Brown last appeared on Weekend Edition, he had just finished his motorcycle tour of America's road food. Now, as his show celebrates its 10th year on the air, he has a new book out this month. Good Eats: The Early Years is the first of a three-volume set.

Brown tells NPR's Liane Hansen that it was painful in some ways to look back on his show's early years. "When you're just starting out, you make a lot of mistakes," he says. "I think one of the whole points of waiting 10 years to do a book — which I always said I was going to wait, the show's got to make it a decade before I would do a book — is you get that space required for retrospection."

But he says it was also a "valuable, cathartic" experience. "You get to kind of pay for your sins — or at least make a few small repairs."

Brown launched the quirky program to break out of the staid cooking show format featuring people behind a cooktop. The camera chases Brown from scene to scene as he encounters oddball characters and explains the science behind baking, roasting and other kitchen mysteries. He credits '90s-era kids show Pee-wee's Playhouse as one of his inspirations. "Laughing brains are more absorbent," he says.

"I think a lot of food shows, especially when we started Good Eats back in the late '90s, they were still really about food. Good Eats isn't about food, it's about entertainment. If, however, we can virally infect you with knowledge or interest, then all the better."

But after 10 years and 200-plus episodes, Brown says he isn't really looking for new material anymore. "I think in the end there are only 20 or 30 tenets of basic cooking." Teachers he's talked to tell him the way to really get things to stick in peoples' minds is to master artful repetition. "It's going at perhaps the same issue from different angles, from different points of view, from different presentation styles, that really makes things sink in and become embedded," he says.

"My mantra was to not repeat for about the first 200 episodes," Brown says. "Now I'm starting to think more of, 'Well no, it's time that you do repeat.' "

And it's finally time for the book. "I think it's the first time that a show like ours has waited a decade to do a book," Brown says. "And I think I turned out to be right, because when I open up the book and look at it now, I feel — I feel closure.

"But, you know, it's a trilogy," he continues. Two more books are planned, and for now the show goes on. Good Eats may or may not last another decade; Brown hopes he'll know when to stop.

"That's a scary question because my entire identity, at least to myself, is wrapped up in that program," he says. "It's one of the few things that keeps me up late at night because I know it will end, and I'll be the one who ends it. I'll be the one to decide."