Accessibility links
Movie Review - Where The Wild Things Are - Among Sendak's Fierce Creatures, Dismay Also Lurks The Spike Jonze-Dave Eggers film, adapted from Maurice Sendak's classic children's book, is one of the year's most anticipated movies. Critic Kenneth Turan says the big-screen version of the tale is a self-indulgent cinematic fable, one he doesn't think will thrill either parents or kids. 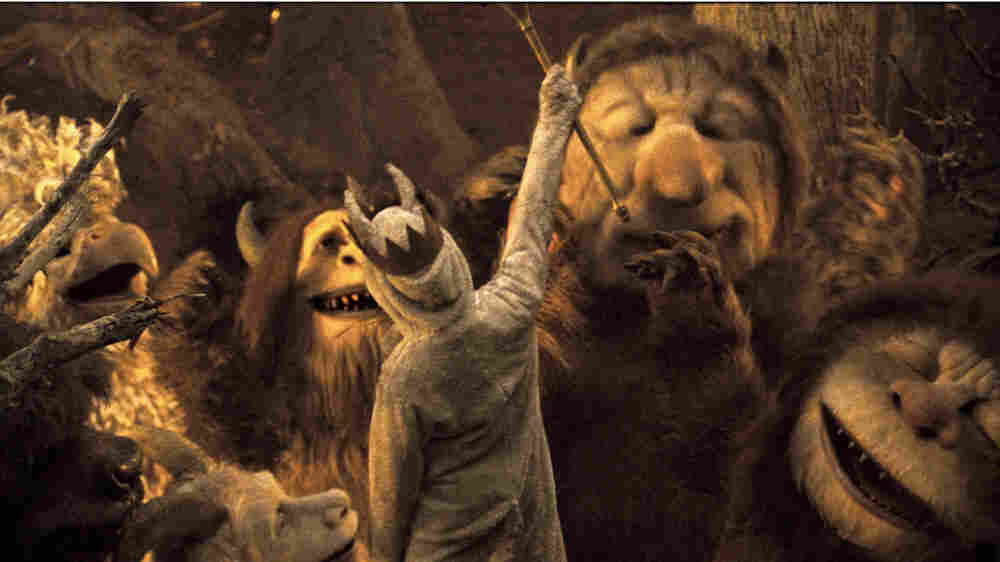 Where the
Wild Things Are

Rated PG, for a certain amount of boyish aggression and monsterish yowling

'Did You Know The Sun Is Going To Die?'

'This Is Our Family'

It's painful to say this — and even more painful to watch it unfold onscreen — but Maurice Sendak's beloved Where the Wild Things Are has been turned into a self-indulgent cinematic fable that neither parents nor children are going to like.

Sendak's story uses only 338 words, in 10 sentences, and it doesn't provide a lot of plot. To fill in the spaces, Spike Jonze's film of Wild Things expands on the sullen brattiness of 9-year-old Max, who's introduced throwing tantrums left and right.

Now sure, those qualities are present in the book. But to blow them up the way Jonze and co-screenwriter Dave Eggers do is to turn the film into a celebration of the most childish aspects of being a child. And that's before our hero bites his mother — hard.

Terrified at the mess he's gotten himself into, Max runs away and magically ends up on an island where the "wild things" live. The creatures look great, kind of like hipster versions of NFL team mascots. But once they open their mouths, a whole other set of problems arises.

"This part of your kingdom's not so good," mopes Carol, Max's main familiar, as the two trudge across a desert dunescape. "This used to be all rock, and now it's sand, and then one day it's gonna be dust, and then the whole island'll be dust — and then I don't even know what comes after dust."

That's right: Jonze and Eggers have turned Sendak's creatures into neurotic adults — and with dysfunctional relationships, too.

To hear them talk among themselves is to feel like you've stumbled into a group therapy session involving unfunny refugees from an alternate-universe Woody Allen movie. It's not a good feeling.

Max does utter the book's signature line — "Let the wild rumpus start!" — but he spends a lot of his time not really being sure what he's doing. He decides to leave the island, for instance, not because "he wanted to be where someone loves him," as in the book, but because he's caused some real damage, and he has no idea how to make things right.

Sometimes, it turns out, you're better off with 10 sentences than with tens of millions of Hollywood dollars. Where the Wild Things Are is one of those times.