We're joined from Oslo by Kristian Berg Harpviken. He's head of the International Peace Research Institute there, which lists possible winners each year. Welcome to the program.

BLOCK: And first, I wonder if Barack Obama was on your radar screen at all this year.

BERG HARPVIKEN: He certainly was on my radar screen. I was aware that he most likely was nominated, but I did not think that he was a very likely candidate. Even yesterday night, as the rumor started circulating in Oslo that Obama may be the winner, I found it very hard to believe. And normally the committee is also tight lipped, so, those rumors are not necessarily to be paid great attention to.

BLOCK: Well, if Barack Obama, you didn't think was a likely winner, who were you thinking would win the prize this year?

BERG HARPVIKEN: I had three likely winners on my list, which is admittedly speculative because it's always hard to know. And of course there were 205 candidates altogether.

BERG HARPVIKEN: Secondly, the Jordanian prince, Ghazi Bin Muhammad, who has taken several important initiatives within the Islamic world - the Amman Initiative, which speaks out against misuse of religion in defense of terrorism. Also, the Common Word, which is a platform for reaching out to other world faiths, say, Christianity in particular. And my third candidate was Sima Samar, the Afghan human rights activist, who is currently also the head of the Afghan Independent Human Rights Commission, as well as the UN special envoy on human rights to Darfur.

BLOCK: How does the Nobel committee balance years when it may want to make a political statement in its choice, if you look at the choices of Aung San Suu Kyi, say, or the Dalai Lama, or avoiding making a political statement? For example, this year they did not choose a Chinese dissident, who had been named, the dissident Hu Jia?

BERG HARPVIKEN: Well, it's a very particular year. In 2009, two of the five members of the committee are new appointees. They are sitting members of Norwegian Parliament until, in fact, the very day, today, even the announcement is being made. And I do think that that makes it particularly unattractive for the committee to draw attention to its independence by provoking a powerful regime such as the Chinese one this very year.

BLOCK: Could you say that that by choosing President Obama, in a sense, a committee is making a political statement?

BERG HARPVIKEN: Well, awarding the prize to President Obama is certainly very daring. It is daring in the sense that this is throwing away the (unintelligible) prize behind unfolding processes, rather than rewarding anybody for (unintelligible) as the Nobel Peace Prize has very much done in the past. But it's not daring in the sense of provoking powerful governments or powerful interests. In that sense, it's a rather uncontroversial prize.

BLOCK: Well, Mr. Harpviken, thanks very much for talking with us. 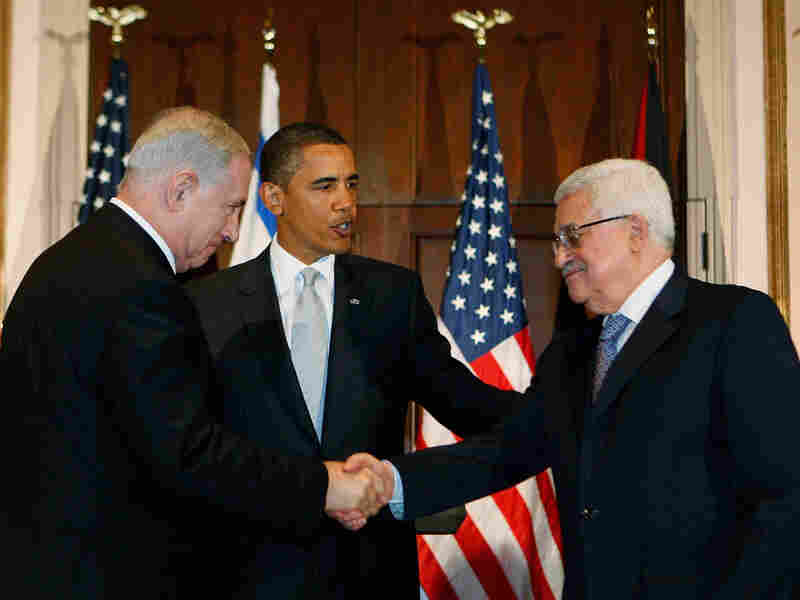 President Obama watches as Israeli Prime Minister Benjamin Netanyahu and Palestinian President Mahmoud Abbas shake hands in New York on Sept. 22. The Nobel Committee recognized President Obama for his efforts to change the tenor abroad. But at home, Obama's win is unlikely to either move or hamper his agenda. Charles Dharapak/AP hide caption 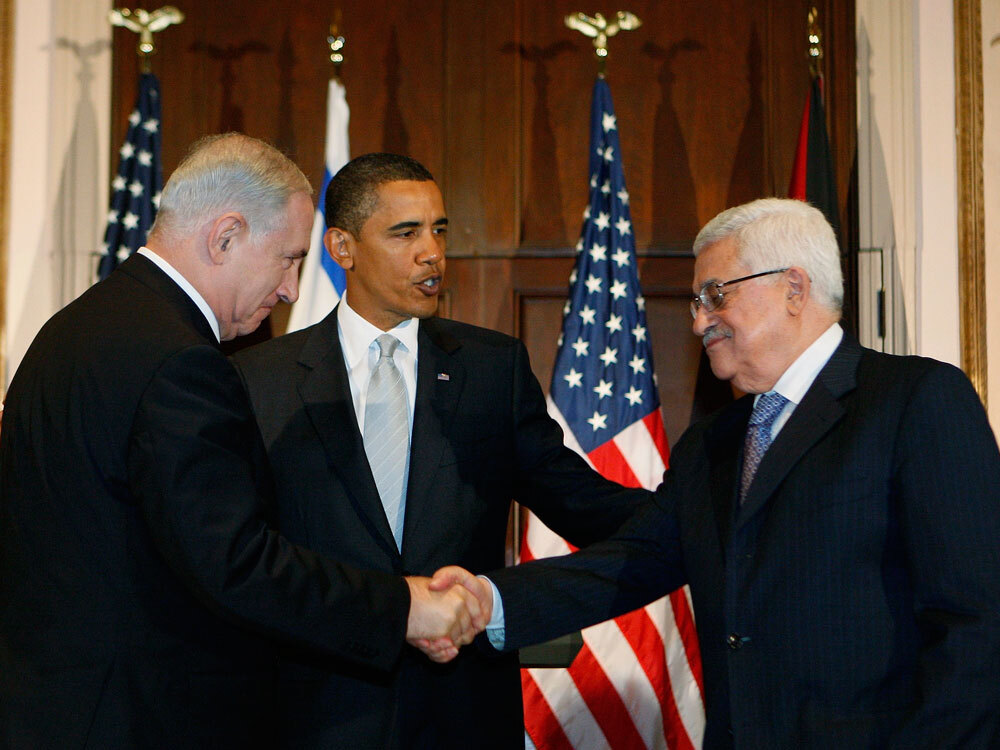 President Obama watches as Israeli Prime Minister Benjamin Netanyahu and Palestinian President Mahmoud Abbas shake hands in New York on Sept. 22. The Nobel Committee recognized President Obama for his efforts to change the tenor abroad. But at home, Obama's win is unlikely to either move or hamper his agenda.

Back home, however, where the president is grappling with near-record unemployment, an epic health care struggle and wars on two fronts, the honor was, at best, a mixed blessing. Even those who generally support Obama say it carries more than a dollop of political peril.

"It seems so inappropriate, so premature, that it gives sustenance to critics who say he's a celebrity honored for his existence and aspirations, not for his accomplishments," says Thomas Mann of the Brookings Institution.

"With friends like the prize committee," Mann says, "who needs enemies?"

Though there has been a predictable flurry of criticism from Republicans, strategists from both sides of the aisle say Obama's international recognition won't move, or hamper, his domestic agenda.

"With everything going on, the lines are too well established here for this to make much of a difference," says Carl Forti, a conservative GOP strategist who worked on Republican Mitt Romney's 2008 presidential campaign.

"Obama has been well-received on the world stage, but that doesn't help him operate domestically," he says.

In Obama's own late-morning comments, he also attempted to downplay the prize — and blunt GOP criticism that had already begun. The president said he doesn't deserve to be in the company of those who have been honored before him.

"I am both surprised and deeply humbled by the decision of the Nobel Committee," he said.

"Let me be clear," he said. "I do not view it as a recognition of my own accomplishments, but rather as an affirmation of American leadership on behalf of aspirations held by people in all nations."

The tone of his brief speech was intended, in part, to counter the morning's Republican talking points and liberal pushback.

GOP Chairman Michael Steele in a statement said it was unfortunate that Obama's "star power" outshined the "real achievements" of others. The conservative Heritage Foundation referred to the award as the "Nobel Intentions Prize."

Meanwhile, the Democratic National Committee and the liberal watchdog site Media Matters wasted no time in comparing the GOP's reaction to that of the Taliban, whose spokesman condemned the award. (The DNC also lumped Republicans in with Hamas, for good measure.)

However, politicos on Capitol Hill were generally more circumspect, leaving the vitriol to other party apparatchiks.

On CNN, Republican Sen. John McCain of Arizona, Obama's opponent in the 2008 presidential race, expressed surprise at the award but said, "Americans are always pleased when their president is recognized by something on this order."

A senior GOP Senate staffer said he would counsel Republicans on Capitol Hill to avoid getting too snarky about the award, because it will have so little influence on pressing domestic issues before Congress, from health care and climate change to proposed overhauls of the nation's financial system.

Ted Widmer, a former speechwriter for President Clinton who is now director of Brown University's John Carter Brown Library, predicted that there would be no negative effect on the president — "except among people who have already decided to hate him forever."

The question of whether the peace prize will affect how Obama decides to proceed in Afghanistan is trickier.

His liberal Democratic base has been agitating for withdrawal — and may be perplexed at the Nobel committee's decision. In fact, the head of the grass-roots organization Peace Action said that the president's "modest" policy changes in his first nine months in office do not warrant a peace prize, particularly since he is considering sending more troops to Afghanistan.

Conservatives have gotten behind Obama's handpicked commander in Afghanistan, who has called for an Iraq-type surge.

Marina Ottaway at the Carnegie Endowment for International Peace predicted that the award won't circumscribe the president's action.

"It could probably make it more difficult for him to declare a major escalation of the war," she says. "On the other hand, all indications have been that he has no intention of doing that in the first place."

"I don't see it as forcing his hand into doing something he wasn't going to do," she said.

The president's decisions on Afghanistan, Widmer says, are based on each day's changing reality on the ground there, and not on any prize.

Though there is no denying that with the prize come expectations of a path to be followed, experts say.

The general consensus is that if Obama handles the prize humbly, as he did in his speech Friday morning, his political clout at home will remain about the same: neither enhanced nor degraded.

"I think the Nobel Committee did this because they want to encourage him both personally and politically," says Jeffrey Kimball, a presidential historian and professor emeritus at Miami University of Ohio.

"Maybe by winning an election, that's part of what he did to earn the prize," Kimball says. "After all, in its history, the committee over the past century has given awards to encourage statesmanship — and also to people who many think should not have won the prize."

Among the more controversial picks was former Nixon Secretary of State Henry Kissinger in 1973, at the end of the Vietnam War.

But former Democratic Sen. Sam Nunn of Georgia, a foreign policy expert, was among those who hailed the committee's decision as recognition of the new diplomatic path Obama has embarked upon in the post-Bush era.

"He has changed the tone of U.S. foreign policy by making it clear to the world that we are in a race between cooperation and catastrophe," Nunn said in a statement. "And he has reshaped the global focus and debate."

"The award underscores how much the international community wants and needs American leadership — and that's something all Americans appreciate," Choubey said.

So, whether the president looks at the prize as a gift or an albatross, it's now his to make of it what he will. And, in that, there is opportunity and peril — though far less of either than partisans would like to believe.